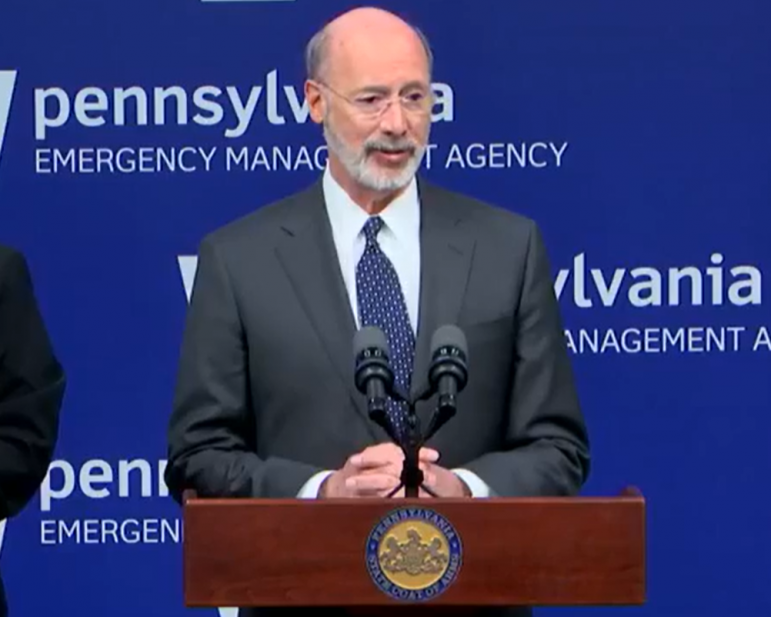 Pennsylvania governor Tom Wolf (D) announced the closure of non-essential retail businesses for two weeks to help prevent the spread of the coronavirus (COVID-19) during a news conference Monday afternoon.

In an unprecedented move to help stop the spread of the coronavirus (COVID-19), Pennsylvania governor Tom Wolf (D) Monday ordered the shutdown of all non-essential businesses in the Commonwealth–including bars and restaurants–for two weeks.

Restaurants will be permitted to offer takeout and curbside pickup options, which local restaurants including Braveheart Highland Pub and Vassi’s Drive-in in Hellertown have just begun to offer in response to public health recommendations.

Schools were already closed for two weeks as of Monday, and in a letter to parents Saucon Valley School District superintendent Dr. Craig Butler suggested it is possible the closures will last longer than that.

Wolf joined a number of other U.S. governors–including those of Connecticut, New York and New Jersey–in making the decision to, as he put it,  “limit opportunities for people to gather together.” Limiting those opportunities will help promote the social distancing experts say will help prevent the pandemic from growing exponentially, he said.

“The measures we have announced today are designed to essentially slow the spread of the virus,” Pennsylvania Secretary of Health Dr. Rachel Levine said during Wolf’s 2 p.m. news conference, which was streamed live online via his Twitter feed. “That’s why he’s taking the measures he is doing.”

Levine said that to date 76 Pennsylvania residents have tested positive for the coronavirus, all of whom are now in isolation at home or being treated in hospitals.

Pennsylvania has not reported any deaths due to the coronavirus, although nationwide nearly 70 people have died from it and more than 4,000 confirmed cases have been reported. Most of the severe COVID-19 cases and deaths have been in elderly patients or individuals with pre-existing health conditions.

In Pennsylvania, thirteen new cases were confirmed as of 2 p.m. Monday.

To date both Northampton and Lehigh counties have one confirmed case of the virus.

The individual with coronavirus in Lehigh County has been identified as a Lehigh Valley Health Network employee and a resident of West Bethlehem.

Levine said results are pending for hundreds more residents, and noted that results of coronavirus tests conducted by private labs are not included in the total she cited.

She also said there is no evidence of “sustained community spread” of the virus in Pennsylvania, but cautioned that “that doesn’t mean we won’t (see it).”

Levine responded to a reporter’s question about whether the virus can be transmitted to someone via a piece of mail or currency by saying that while such transmission may be possible–since it’s been shown that COVID-19 cells can remain viable on untreated surfaces–it is unlikely to occur.

Wolf said he is not recommending a curfew from 5 a.m. to 8 p.m., as Gov. Phil Murphy (D-NJ) has done because he wants people to stay home 24 hours a day if possible.

He said essential businesses like supermarkets and pharmacies will remain open and encouraged state residents to visit them as they normally would over the coming weeks.

Since fear about the spread of the virus began to become widespread nearly a week ago, many supermarkets have been emptied of things like toilet paper, hand sanitizer, bleach, rubbing alcohol, cuts of meat and various food items which have been purchased in abundance by panicked shoppers fearful of a quarantine.

Responding to a reporter’s question about whether daycares are included in his latest public health directive, Wolf said that “at this point we are calling for childcare facilities to close, but we are not sending out the state police to enforce this,” Wolf said.

In answer to a different reporter’s question, Wolf said he will not cancel several “mid-state” car races that were held with thousands of fans in attendance over the weekend, after state authorities recommended that people avoid assembling in large crowds because of how the virus is spread.

“What should we do in terms of what we owe to our fellow citizens? … That’s what I would ask of the folks at the race course,” Wolf said.

He added that state parks will remain open, but said he has concerns about park employees.

“I would suggest that caution is as applicable there as it is in any other setting,” he said.

Locally, government buildings in Hellertown, Lower Saucon Township, Upper Saucon Township and Fountain Hill are closed to the public, although essential services like police, fire and EMS are available and will respond in an emergency. Most upcoming municipal meetings are canceled due to the directives from health and safety officials.

For more information about the coronavirus and Pennsylvania’s response to it, visit the Department of Health’s website and follow them as well as the governor on Twitter.