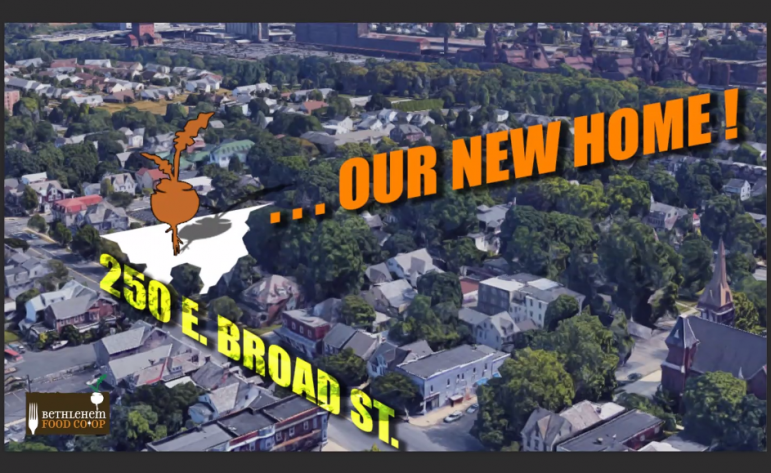 The Bethlehem Food Co-op will be located at 250 E. Broad Street on the city’s north side when it opens. An opening date has not yet been determined and will depend on the pace of a $1.7 million capital campaign as well as how fast the four-story building that will house the store can be constructed. The partly-vacant property is located between High and Linden streets.

Fans of growing a local, sustainable food supply and improving access to fresh, natural and organic food in the Lehigh Valley are rejoicing this weekend over the Bethlehem Food Co-op’s long-awaited announcement that a lease for the store has been signed.

The north side property is located between High and Linden streets and has a one-story building on part of it that will be razed in order to construct the new building.

“Securing the lease is just one important step in opening our doors,” Allen said.

He added that he is proud to be a member of the organization, which as part of its mission plans to improve access to fresh and sustainably-sourced food in the community.

State Sen. Lisa Boscola (D-18), whose district includes Bethlehem, also congratulated the co-op and its supporters on taking this major step toward opening.

Co-op board member Carol Ritter updated those on the call on the capital fund drive for the store, which is ongoing and will involve an advisory committee that is being formed.

“Our target is $1.7 million,” Ritter said of the campaign. “We can do this. I’m a fundraiser, and I can honestly tell you that is not a whole lot of money for the Lehigh Valley and for Bethlehem.”

Member loans ($2,000 mininum with terms of eight, 10 and 12 years) will help the co-op reach its funding goal, she explained, along with tax-deductible donations, naming rights opportunities, grant opportunities and bank loans.

Naming rights opportunities will be announced in the coming weeks, she added.

The formal launch of the capital campaign will be in the late spring, Ritter said, and the goal is for the Bethlehem Food Co-op to have 1,200 members by the time the store opens.

The co-op currently has nearly 800 members, each of whom has pledged $300 toward the goal of opening the food store.

Why was the north side location chosen?

The south side already has some grocery stores, board member Elliot Nolter said, whereas the center city area and historic Bethlehem neighborhoods around it do not.

When it opens, the store will be the anchor tenant on the ground floor of a new four-story mixed use building that will house apartments on upper floors, Nolter also announced.

The building will be constructed in partnership with Peron Development of Bethlehem and Boyle Construction of Allentown. In response to a member’s question, Nolter said he couldn’t yet speak to whether environmentally conscious building materials and practices will be employed in its construction. Recycling will be a priority for the store, he said. 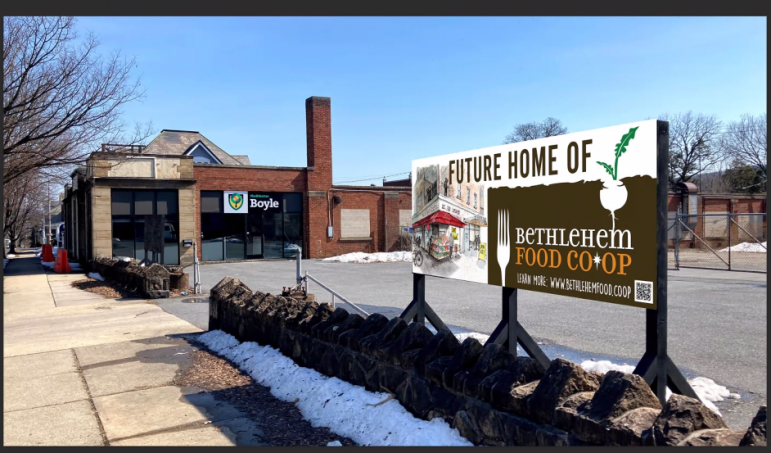 A special community event will be held at the future site of the Bethlehem Food Co-op on Saturday, March 13 from 10 a.m. to 1 p.m. Curbside with the Co-op will be a drive-by event with volunteers handing out buttons, yard signs and membership information at 250 E. Broad St., Bethlehem.

“Since it’s a new building we’re going to be able to fit that space out exactly how we want to,” he said, adding that the co-op store will house a cafe with outside seating and a bike rack, so customers can easily park their bicycles when they ride there to shop for food.

There is no groundbreaking date yet, but “the wheels are in motion,” Nolter said.

“The timeframe between now and ribbon-cutting is dependent on the pace at which the developer is able to construct the building” and also the pace at which funds are raised by the Bethlehem Food Co-op, he added.

“We have proven that this community is up to the task,” Allen affirmed.

Curbside at the Co-op, a drive-by event, will be held Saturday, March 13 from 10 a.m. to 1 p.m. at the new site. Visitors should remain in the cars. Volunteers will speak to them and share swag like buttons and yard signs promoting the Bethlehem Food Co-op.

There will also be a livestreaming of a new sign promoting the location on both the co-op’s Facebook page and Lehigh Valley With Love’s social media channels.

You can become a member and learn more at BethlehemFood.coop, where details about membership–payable via a one-time fee of $300 or in monthly installments over a year–and other informaton can be found. The co-op is on Facebook and Instagram, and also publishes a newsletter, The Sprout, which you can subscribe to via their newsletter.