An unusual question posed by a stranger who stopped his vehicle outside a Lower Saucon Township home has police concerned enough that they issued a “suspicious activity” alert Tuesday.

According to township police’s Crimewatch post, the puzzling incident occurred Monday, March 29 at around 1:40 p.m. in a resident’s driveway on Apple Street.

That’s where a man operating an older model Land Rover towing a trailer that was apparently loaded with junk pulled over and asked the homeowner if he could leave the trailer there. 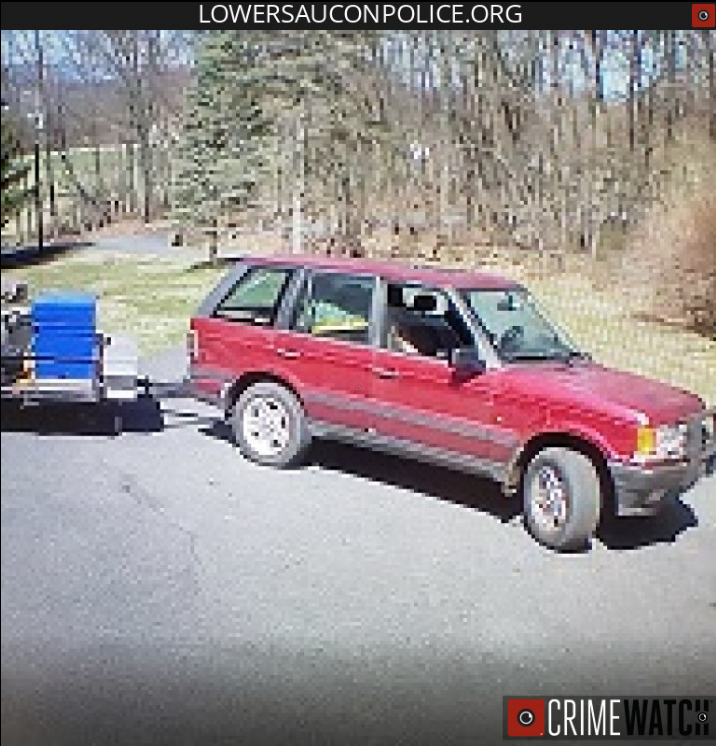 Lower Saucon Police say a man who was driving the Land Rover pictured above behaved suspiciously when he stopped in a resident’s Apple Street driveway Monday and asked if he could leave the trailer there. Police said the trailer appeared to be loaded with junk. The man may be from out of state, since police said both the SUV and trailer may bear out-of-state plates.

According to township police, the mysterious traveler then asked if the resident knew “General Mad Dog” and had served in the military.

“When the resident answered ‘No,’ the male said ‘Oh, I must be at the wrong house’ and left the driveway,” police said.

Police said the Land Rover and trailer both appeared to bear out of state license plates.

They said the man driving the SUV was described as being 50 to 60 years old, but provided no further description of his physical attributes or demeanor.

The department’s Crimewatch post includes an embedded video that shows the unidentified man pulling into and then backing out of the rural driveway, but his profile is concealed in shadow.

Anyone who may have encountered the vehicle or who can identify the driver or vehicle is asked to contact the Lower Saucon Township Police Department by calling 610-317-6110 or to submit an anonymous tip via their Crimewatch Tipline.