Grida’s Soft Ice Cream has been serving comfort food in a welcoming environment to families, friends and neighbors in Richlandtown for more than 50 years.

John and Mary Grida opened the seasonal eatery at 36 N. Main Street in the small borough near Quakertown in 1967, and running the restaurant quickly became a family affair.

“My husband has worked there his whole life. That’s what happens when you’re the child of a business owner,” said Michele Grida, who is the daughter-in-law of John and Mary.

Michele’s husband, David, purchased the business from his parents along with his sister in 2015. They continued the family tradition of operating Grida’s until a difficult 2020 forced them to reconsider their priorities.

Michele had come down with a very serious case of COVID, which had her on a ventilator and limited her ability to help out at the restaurant.

“As far as my husband, it became so busy and stressful for him that we just felt that we needed to make a change,” she said. “Knowing how close I was to not surviving I think really put things more in perspective.”

Stacey Carr is not a Richlandtown native, but when she would visit her son Kyle, who lives 450 feet from Grida’s, she was astonished by the crowds the restaurant attracts. 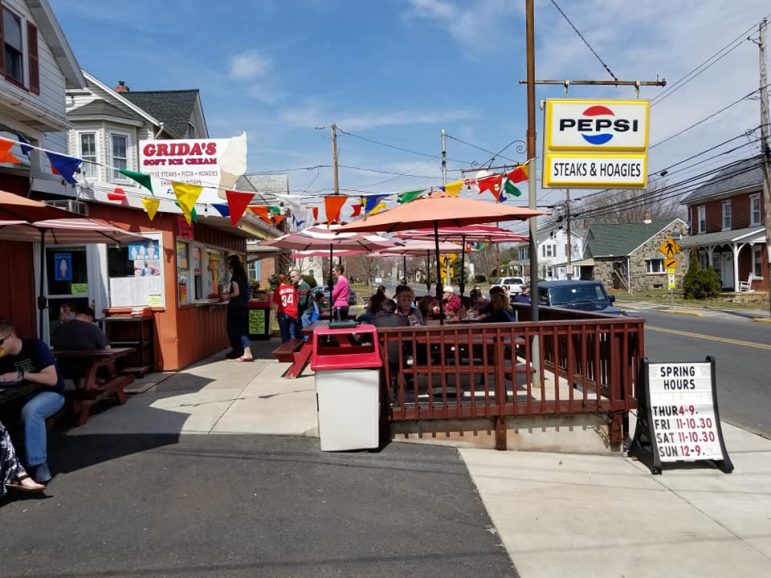 Grida’s has been a beloved food destination in Richlandtown since the first ice cream was served there back in 1967. The Gridas recently sold their business, but it will retain its family atmosphere when the Carr family reopens it later this spring.

“It’s amazing to me, not being from that area,” Carr said. “It’s cultish the way people like that ice cream,” she laughed.

Carr couldn’t shake her fascination with the restaurant, so when she saw that the Grida family had put the business up for sale last summer she acted on the opportunity.

“It’s the weirdest thing, how drawn to this property I was,” she said. “I went and saw it and said, ‘I’m gonna make an offer.’”

Carr made her offer in January, and the sale was settled in March. Despite some concerns about taking over a business during a pandemic, she was surprised at how smooth the process has been so far.

“I was thinking that this is not the best time, probably, and that it’s going to be hard to get financing for a restaurant during COVID,” Carr said. “Honestly, everything has fallen into place easily.”

The business will take on a slightly new name, Grida’s 2.0, which Carr said is a reflection of her wish to continue the Grida’s tradition, while also heading in a unique new direction.

“They’ve been in business for 53 years, so obviously they’re doing something right,” she said.

Carr said Grida’s 2.0 will retain menu favorites from over the years, including, of course, their famous soft-serve ice cream. She plans on introducing new signature items, including healthier options such as paninis.

She also plans on offering an extensive selection of gourmet hot dogs.

“I don’t eat hot dogs, but I’ll tell you I’ve become a convert now that I can do so many fun things with them,” Carr laughed.

Carr has plans to modernize the business by creating a Grida’s 2.0 website and offering online ordering. Future plans for the business include installing a digital menu board, revamping some of the equipment and interior wiring, and unveiling a new sign and logo.

More than anything though, Carr said she wants to continue the tradition of serving and welcoming the community the same way the Grida family has for decades.

“I kept saying to people, ‘What is it?’ and I think a lot of what it is is nostalgia,” she said. “I think that for people, their grandparents took them there, they went there as kids, you know people have great memories of a good product surrounded by an excellent community.”

Grida’s 2.0 will also be a family endeavor. Carr’s daughter-in-law, Tia, will serve as the manager of the establishment, and Carr said both of her sons and their spouses will help out at the restaurant in various capacities.

The Carr family is even hiring Brittney Grida, middle daughter of David and Michele, who will provide training and oversight as the Carrs work on getting the business up to speed.

The Grida family has been working closely with the Carrs during this transition period, and they hope to see their former business thrive for years to come.

Carr said Grida’s 2.0 will continue to be a seasonal restaurant that operates from spring through fall. She is hoping to open the restaurant for its 2021 season in May.

Be sure to follow Grida’s 2.0 on Facebook and Instagram to be the first to know when the grills and soft-serve machines fire up for the first time under their new ownership.