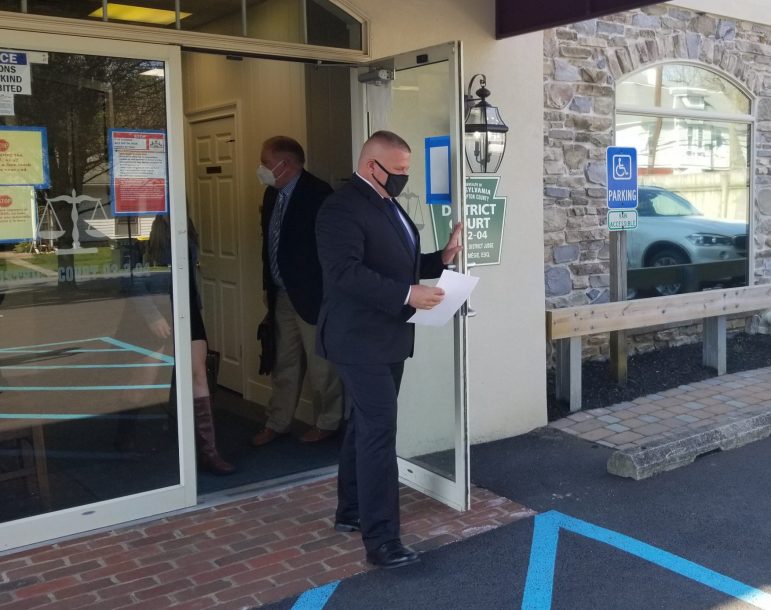 NOTE: This story has been updated to reflect the current employment status of Ofc. James M. Connell within the Lower Saucon Township Police Department.

Lower Saucon Township police officer has been charged with assault for allegedly punching another man outside a Hellertown restaurant while off-duty last week.

James M. Connell, 46, of the township, is charged with Misdemeanor 2 simple assault and a summary charge of harassment, according to Northampton County court records.

In a court appearance Thursday morning, Connell waived his right to a preliminary hearing on the charges and was released by District Judge Alan Mege on $5,000 unsecured bail.

Mege noted that Northampton County Pre-Trial Services had determined that Connell–who has no criminal record–was eligible to be released on his own recognizance with the condition that he has no contact with the alleged victim in the case.

Connell will not be under any court supervision pending his next court appearance, a formal arraignment/pretrial conference which is scheduled for Thursday, July 8 at 1 p.m. at the Northampton County Courthouse in Easton.

Mege noted that Connell would be required to be fingerprinted and update the court if his address changes, which are standard procedures for most criminal court defendants.

During the proceeding, Connell’s attorney James Burke told Mege his client will seek to have his case disposed of via the county’s Accelerated Rehabilitative Disposition (ARD) program, which is available to defendants who qualify for it at the discretion of the district attorney’s office. Qualification is typically based on the nature of the charge(s) as well as an applicant’s criminal history or lack thereof. Upon successful completion of an ARD program’s requirements, a defendant’s criminal charges are dismissed by the court.

Burke commented during the proceeding that Connell’s eligibility for ARD will be determined by Northampton County District Attorney Terry Houck’s office.

As he left the court with Connell, Burke declined to comment on the case. 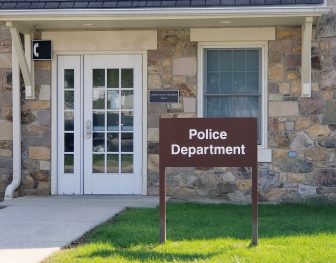 Lower Saucon Township Police headquarters are located in the township municipal complex on Old Philadelphia Pike. The department currently employs 15 full-time and six part-time officers, according to the township’s website.

According to the criminal complaint filed by Hellertown Police Investigator Michael Dattilio, the assault for which Connell is charged occurred April 1 around 6 p.m. in the parking lot of Wings on Main at 605 Main Street.

In the complaint, Dattilio identified the victim of the alleged assault as a 25-year-old Hellertown man, who he said he later interviewed at police headquarters.

Dattilio said in the complaint that as the man left the restaurant, “he observed a male who he was familiar with as ‘Jim’ Connell, positively identified as James M. Connell…occupying a red in color Ram pickup truck.”

Dattilio wrote that Connell then “displayed his middle finger to the victim, which the victim then returned the same gesture while exchanging words,” but the complaint does not specify what was allegedly said at that point.

According to the complaint, at that point Connell reversed his truck toward the parking lot entrance as the alleged victim got into the passenger side of his own vehicle, which was identified as a Ford Explorer.

“Seconds later, (Connell) approached the vehicle…and opened the passenger door, gaining access to the victim, and asked ‘You got a problem with me?'” the complaint says.

Connell then allegedly put “both hands around the victim’s throat and struck him in the mouth with a closed fist causing injury before being forcibly dragged away by two bystanders,” it continues.

Dattilio said the information in his criminal complaint was “obtained through interviews and voluntary written statements.” He added that “video surveillance footage from an on-site surveillance system at Wings on Main…accurately depicted the…account of events” outlined in the complaint and the affidavit of probable cause contained within it.

Dattilio also noted that he “did offer an interview opportunity to (Connell),” which was “declined on the advice of legal counsel.”

Reached by phone Wednesday, Lower Saucon Township Police Chief Tom Barndt declined to comment on the charges against one of his officers on the advice of legal counsel, calling it “a personnel matter.”

District Attorney Terry Houck said Thursday that Barndt had informed him that Connell was suspended with pay pending outcome of the investigation.

Barndt later clarified that Connell is now suspended from the force without pay.

“Officer Connell has been suspended pursuant to the Pennsylvania Confidence in Law Enforcement Act,” he said in an email. “The suspension was paid until charges were filed, now it is unpaid.”

In determining potential eligibility for ARD in this case, Houck said things such as injuries to the alleged victim would be considered.

“We would have to talk to the victim,” he said. “There’s a lot of factors that turn on each individual case.”

Court records indicate that in November 2020, the alleged victim in this case pleaded guilty to a summary charge of operating a vehicle without a valid inspection in Lower Saucon Township. In that case, which was heard by Mege, the man was then responsible for paying fines and fees totaling approximately $150, according to court records.

It is unclear if there is any connection between Thursday’s alleged incident and contact the alleged victim may have previously had either with Connell–while either on or off duty–or with other members of the Lower Saucon Township Police Department.

Note: All individuals charged with a crime are presumed innocent until proven guilty in a court of law. This story was compiled using information from the Hellertown Police Department and Northampton County court documents. This story may be updated if or as additional information becomes available.