Note: This story has been updated with a photograph and additional information about the case provided by the Lower Saucon Township Police Department in a post published on their Crimewatch site Tuesday.

A Lower Saucon Township man is facing criminal charges after police say he repeatedly fired a gun and harassed neighbors while he was allegedly intoxicated early Sunday.

In a criminal complaint filed in Northampton County District Court 03-2-04, township police officer Keith Bredbenner said Kenneth Reid Grimm Jr., 23, was initially going to be cited for disorderly conduct. According to a police department statement, a summons for disorderly conduct was filed against Grimm after officers were called to his home in the 2200 block of Wassergass Road at around 5:03 a.m. for a report of shots being fired. 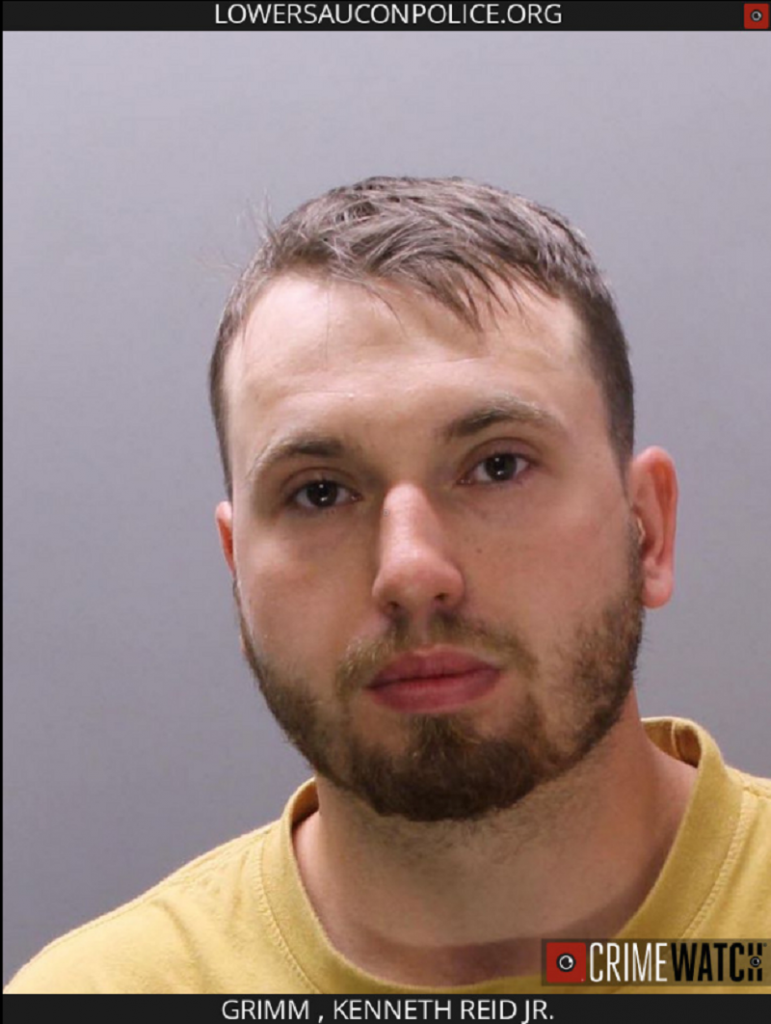 In a post published on the department’s Crimewatch site Tuesday, police said “several witnesses reported that prior to police arrival Mr. Grim (sic) was observed standing next to a garage with a handgun in his hand,” and that despite a search by officers the weapon was not located during their first visit to the residence.

After coming on duty, “Ofc. (Robert) Winters advised me (that) Ken Grimm was intoxicated and shooting his pistol into the ground,” Bredbenner said of the communication he received about Grimm’s first alleged unloading of the gun.

Bredbenner wrote in the criminal complaint’s affidavit of probable cause that police responded to the home a second time around 6:54 a.m., after receiving a report of “the same male outside shooting another shot.”

Upon his arrival, Bredbenner said an acquaintance of Grimm’s advised him that he had secured Grimm’s firearm in his car.

The man “showed me the gun which was already unloaded with 12 rounds left in a 16 round magazine,” Bredbenner said, adding that “there was a 9mm round in the middle of the driveway.”

Bredbenner said he and other officers then made contact with Grimm inside his apartment above a garage on the property, where he was with his mother.

“Grimm was visibly intoxicated and stated, ‘they called the cops again, your (sic) here to arrest me,” the affidavit said.

In the course of his investigation, Bredbenner said he spoke to a 16-year-old neighbor who said Grimm began texting him “sleep tight, have a good life” after the first contingent of officers left. While he was texting the boy, Grimm was allegedly “banging on the door and yelling to come outside,” the affidavit said, and the boy advised police that after hearing the banging and yelling “he heard another gun shot.”

Other people in the vicinity who were interviewed by police also testified to having heard Grimm banging on things outside, yelling, and firing shots, according to the affidavit.

According to the criminal court docket for his case, Grimm is charged with one count of Terroristic Threats Causing Serious Public Inconvenience (Misdemeanor 1), three counts of Simple Assault (Misdemeanor 2) and three summary counts of harassment.

Following a preliminary arraignment before District Judge John Capobianco Sunday, Grimm was committed to Northampton County Prison in lieu of $50,000 straight bail, which according to court records had not been posted as of Monday evening.

Grimm’s preliminary hearing before District Judge Alan Mege in District Court 03-2-04 in Lower Saucon Township is scheduled for Monday, May 3 at 9 a.m., according to the court docket.

Court papers indicated that Grimm is being represented by attorney George S. Nassif of Bethlehem.

Note: All individuals charged with a crime are presumed innocent until proven guilty in a court of law. This story was compiled using information from the Lower Saucon Township Police Department and Northampton County court documents.