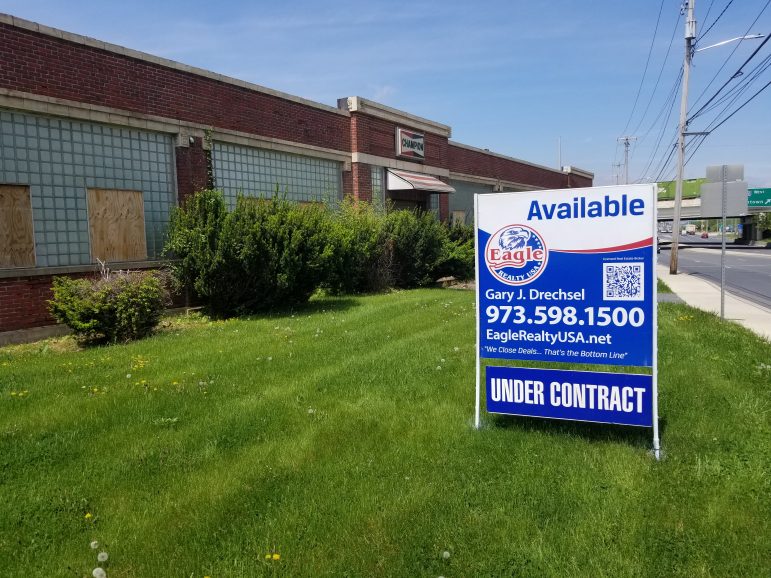 A sign outside the former Champion Spark Plug factory at 1770 Main Street in Hellertown says the building is under a contract of sale. Borough officials said Tuesday that they have not yet received any information about a pending sale of the landmark property, which is located at the borough’s northern gateway at I-78 and Rt. 412. Champion became an EPA Superfund site in the early 1990s due to environmental contamination that occurred there from approximately 1930 to 1975.

A sign outside the former Champion Spark Plug factory on Main Street at the north end of Hellertown is catching people’s attention. It says the landmark industrial property–which was listed for sale in February without an asking price–is now “under contract.”

Details related to the pending sale have not been disclosed, and an email to the real estate agency that listed the property was not returned, but borough officials said they look forward to learning more about what may be planned for the former Superfund site.

Hellertown codes enforcement and zoning officer Kris Russo said Tuesday he is hopeful someone with knowledge of the transaction will reach out to the borough soon.

“This property has been at the top of our list for sites in need of development for many years, so we are interested in what the plans may be,” Russo said. “We would love to know who the buyer is and what type of development they have in mind.”

The 7.35-acre property is zoned Highway Commercial and part of an overlay district.

In 2011, it was one of three landmark borough properties discussed at a sustainable planning workshop sponsored and funded by the U.S. Environmental Protection Agency (EPA) and held in Hellertown.

According to the EPA, Champion was the site of environmental contamination from 1930 to 1975, when the Hellertown Manufacturing Company produced spark plugs there.

The agency’s September 1991 Superfund Record of Decision for the Champion site noted that “in 1976, after the facility began discharging treated wastewater into the municipal sewer system, the lagoons were backfilled, closed in place and covered with topsoil…. The material used to backfill the lagoons included rejected spark plugs, demolition material from road-building activities and soil excavated during construction of the nearby Bethlehem wastewater treatment plant. Studies conducted in 1990 identified contamination by VOCs, metals and organic compounds in lagoon backfill, soil and in onsite groundwater.”

The cleanup of Champion that began in the early 1990s also removed benzene and other contaminants, and lasted decades.

According to a July 2012 article published by Lehigh Valley Live, the EPA handled groundwater remediation there until 2007, when the Pennsylvania Department of Environmental Protection took it over.

The estimated timeline for completion of the cleanup when it was beginning in the early 1990s was a “minimum” of 30 years, according to a Morning Call story from July 1991.

Thirty years later, the property is still being monitored by the EPA, which says on its website that “groundwater monitoring is ongoing.” A five-year review of the efforts was scheduled for 2020, but it was unclear if that took place from the summary of the ongoing efforts. The EPA’s 2015 five-year review may be viewed online, here.

“At this site, activity and use limitations that EPA calls institutional controls are in place,” the EPA’s Champion Superfund profile states. “Institutional controls play an important role in site remedies because they reduce exposure to contamination by limiting land or resource use. They also guide human behavior. For instance, zoning restrictions prevent land uses–such as residential uses–that are not consistent with the level of cleanup.”

Under Cleanup Progress, “Site Milestones” for the property, the EPA lists one that stands out and occurred on Aug. 6, 2013: “Site Ready for Reuse and Redevelopment.”

According to Northampton County records, the current owner of the Champion property is Paikes Enterprises Inc. of Quakertown, which purchased it for $800,000 in 1988.

Total property taxes owed in 2019 were nearly $37,000, according to the listing on Crexi.com, which was updated Wednesday to reflect that the property is under contract.

At the sustainable planning workshop held by the EPA in Hellertown nearly a decade ago, one idea suggested for the Champion site was as a technology business incubator.

Its proximity to I-78 and the then-new Saucon Rail Trail could also make it an attractive location for bike and car-sharing operations, architect Kim LaBrake said at the time.

Of the three properties discussed in 2011, the only one that has been redeveloped is the borough’s former movie theater, which today houses a dental office and a salon.

The other property included in the discussions was the former chromium factory on Front Street.