In 1918, women in the U.S. did not yet have the right to vote. However, they had other protected rights, as evidenced by a newspaper article from Aug. 31, 1918 about a Hellertown hotel owner who was fined for requiring his female employees to “work more than six days a week.” The article, which appeared in the Reading Times, also notes that Quintus Fritchman failed to “post a proper schedule.” Fritchman was required to pay a $30 fine* and related costs to an inspector for violating state labor laws, the story noted.

It is interesting to note that there are two “Quintus Fritchmans” who were alive and likely living locally in 1918. Both Quintus Fritchman (1860-1928) and Quintus Dewey Fritchman (1899-1947) are buried in Hellertown’s Union Cemetery. Although their memorials are not linked on FindAGrave.com, it appears likely that Quintus Dewey was the son of Quintus Fritchman. According to his 1947 death certificate, Quintus Dewey Fritchman lived at 206 Northampton Street at the time of his death on July 10. Since he would have been just 19 years old in 1918, it is likely that his father was the hotelkeeper referenced in the Reading Times article. According to our research, Quintus Fritchman’s brother was Tobias Fritchman (1864-1925), whose grandson would later become the namesake for Alfred J. Fritchman Reservoir Park in Lower Saucon Township. Alfred J. Fritchman (1914-1993) was a Hellertown Borough Authority board member and a local Lions Club member in the mid-20th century, when the authority acquired the park. 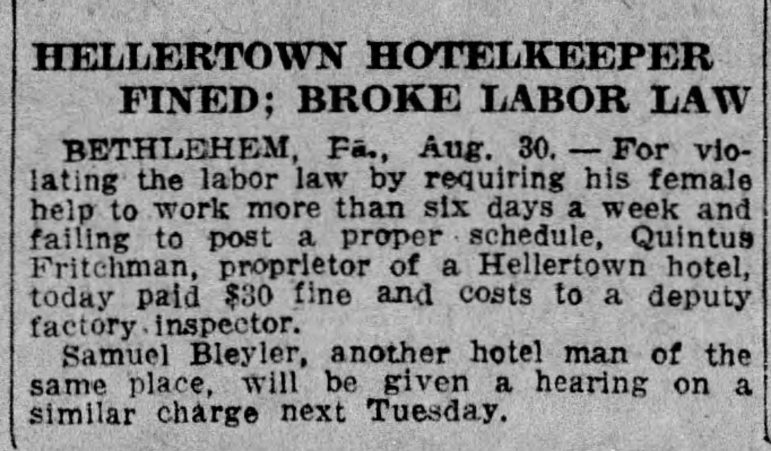