A 54-year-old female passenger who was also in the vehicle was able to escape from it and survived, police said, adding that she was taken to St. Luke’s Upper Bucks Campus for treatment.

According to the news release, state police were first dispatched to the 1900 block of Trumbauersville Road around 11:15 p.m. Wednesday for a report of “a missing person from a vehicle that had driven into the flood waters of Unami Creek.” 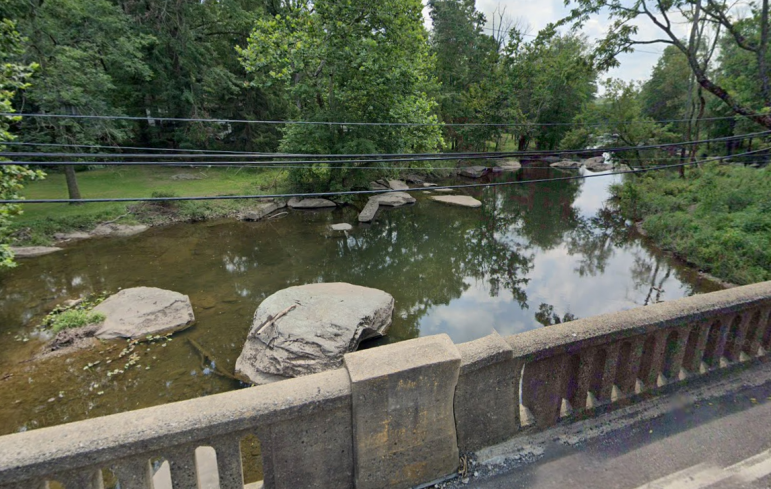 Pennsylvania State Police at Dublin said 65-year-old Donald Allen Bauer of Perkiomenville, Montgomery County, drowned Wednesday when his vehicle became trapped in flood waters along the Unami Creek, which burst its banks after the remnants of Hurricane Ida dumped upwards of 7 inches of rain on the area. (Credit: Google Street View)

After locating the vehicle–which was described as a 2013 Mazda CX9–and attempting a rescue, troopers said they and fire department personnel determined that “conditions were too severe” and postponed the rescue effort at 11:30 p.m.

At approximately 6 a.m. Thursday, along with fire department personnel and members of a water rescue team, troopers said they again attempted to retrieve the vehicle and subsequently found Bauer deceased inside it.

The news release indicated that the Bucks County Coroner’s Office pronounced Bauer dead at the scene at 10:10 a.m. determined that his cause of death was drowning.

The manner of Bauer’s death was determined to be accidental, it said.

According to the National Weather Service, much of Bucks County received in excess of seven inches of rain when the remnants of Hurricane Ida swept through the region.

In neighboring Hunterdon County, N.J., it was reported that a man drowned in his vehicle, which was found in a creek near the Delaware River in Milford.