The 2021-2022 school year is more than a month old, and the good news so far is that most districts have been able to avoid shutting down schools due to COVID outbreaks.

Both the Saucon Valley and Southern Lehigh school boards approved requirements for masking-wearing, albeit under different plans, before Gov. Tom Wolf announced a mask mandate for all Pennsylvania students beginning Sept. 7.

In spite of mask-wearing and other COVID safety protocols that are in place, there had been some confirmed cases of COVID in all of the schools in both districts, as of Oct. 6.

Each district maintains its own COVID-19 dashboard on its website, which features updates about the number of confirmed cases as well as other information.

According to the numbers shared by the district, as of Oct. 6 there had been 10 confirmed COVID cases at Saucon Valley Elementary School, including three among staff members; six confirmed cases at the middle school, with no staff members testing positive so far; and eight confirmed cases at the high school, including three faculty/staff cases. There have also been two multi-building cases, for a total case count of 26 to date. 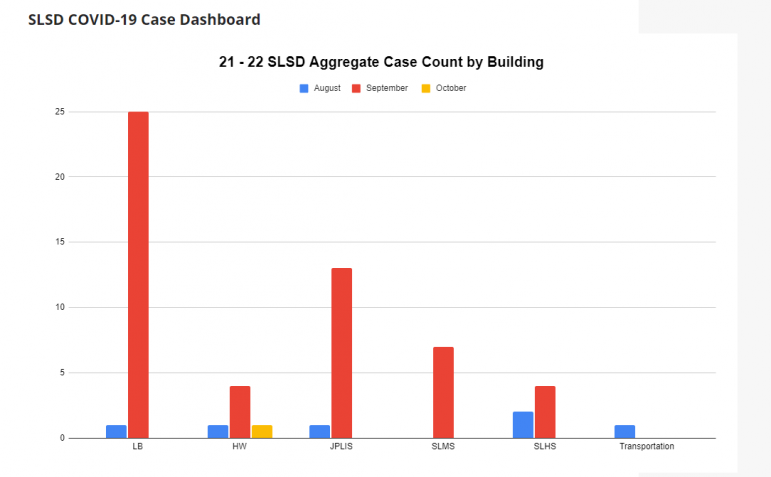 A screenshot of a graph on the Southern Lehigh School District’s COVID-19 dashboard shows the number of cases confirmed at each school and on district transportation in August, September and so far in October. The 2021-2022 school year in Southern Lehigh began Aug. 30.

The total number of all the cases in all the schools so far, as of Wednesday, was 60.

According to the district’s 14-day rolling case count, over the past two weeks there one case each at Liberty Bell, Hopewell, the middle school and the intermediate school, and two cases at the high school.

The Southern Lehigh statistics do not differentiate between student and staff cases.

The Southern Lehigh School District’s 2021-2022 COVID Health and Safety Plan may be found on the district’s website.

For more information about COVID case counts in Pennsylvania and locally, visit the PA Department of Health’s dashboard as well as CovidActNow.org, which assesses each county’s current risk level based on data including case numbers and infection rates.

For information about the current rates of vaccination in Pennsylvania, see the state’s vaccination dashboard. As of Wednesday, Oct. 6, the state Department of Health reported that 63 percent of state residents (excluding Philadelphia county) had received at least one dose of a COVID vaccine, with 57.3 percent of Pennsylvanians fully vaccinated against the disease.