The public health order, which was issued by Acting Health Secretary Alison Beam, comes just days after students across the state returned to class, and as school boards and administrations grapple with how to manage local mask requirements in response to rising cases of COVID-19 fueled by the aggressive delta variant.

Wolf and several other officials from his administration said doing this was the best way to keep schools open and students in classrooms for in-person instruction. The Centers for Disease Control and Prevention recommends that all students and staff wear masks in schools, regardless of vaccination status.

“This is something that if we don’t do this, we’re not going to have a school year with kids in the classroom and that’s going to be a wasted, lost school year for our children,” Wolf said. 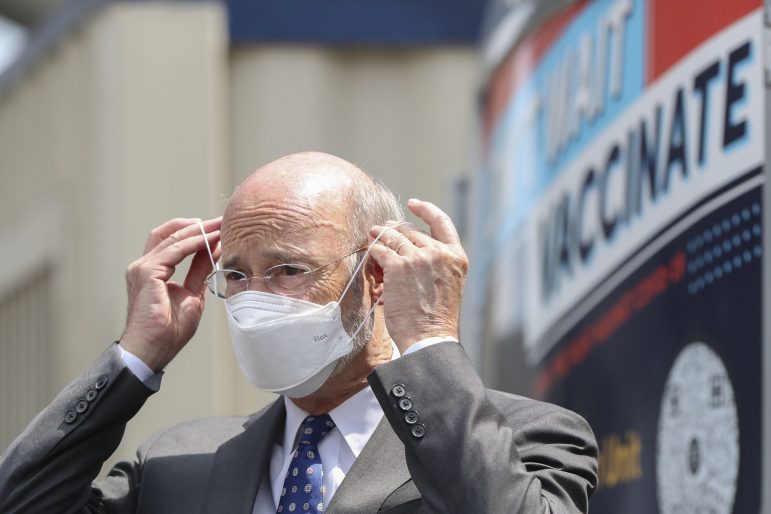 Gov. Tom Wolf previously asked the state legislature to institute a mask mandate, but GOP leaders declined to do so.

House Republicans said “all options remain on the table” as they review the mandate.

The caucus is “already in the process of taking a serious look at potential legislative changes that address this administration’s misuse of current law,” House Majority Leader Kerry Benninghoff (R., Centre) said in a statement.

Wolf sent a letter last week to Republican leadership in the General Assembly, asking lawmakers to return to the Capitol before their fall session starts in late September in order to pass legislation mandating masks in schools and child care centers.

But Senate President Pro Tempore Jake Corman (R., Centre) and House Speaker Bryan Cutler (R., Lancaster) rejected the call in a letter of their own, stating that many communities have already made decisions about how to handle local conditions and emphasizing that vaccines are one of the most effective ways to stop the spread of the virus.

Currently, only children ages 12 and older can be vaccinated against COVID-19.

Corman criticized the administration’s order in a statement Tuesday, claiming the secretary of health “does not have the authority to even implement or enforce mitigation measures on healthy Pennsylvanians.”

“It is completely disingenuous for him to flip-flop now, when he didn’t like the choices school districts made,” Corman said of Wolf.

The move is a departure from Wolf’s earlier position on a statewide masking mandate for schools. In early August, he said the administration would leave it up to individual districts to decide what they want to do.

But that didn’t happen, he said Tuesday, and acknowledged that this decision could have been made sooner.

“This is where we are right now,” Wolf said. “I’m the one holding the bag. I’m the one that has to make the decision.”

Several districts have already been to court over their policies, as some parents questioned districts’ authority to implement mask mandates at the local level while others have sued for stricter masking guidelines in school buildings.

The order issued Tuesday does not apply to indoor or outdoor school sports, other outdoor activities and to children under two. It allows for exceptions related to medical conditions, activities like eating or drinking, and playing a musical instrument.

State officials said they are relying on parents and school boards to enforce the order, with the hope that incentives like keeping students healthy and in school for class and extracurricular activities will motivate them to comply.

“They’re the ones that are overseeing the enforcement of this and in the end, what we all want is what they want, and that is to keep our kids in school and to keep sports being played,” Wolf said. “Those are the things we can’t do if we don’t do something like this.”

Wolf and state Education Secretary Noe Ortega did not outline specific penalties for schools that do not comply.

The administration will review the order the first week of October to determine whether it still needs to be in place.

“What we’re going to want to see is, (is) the pandemic is going away, that our children are no longer threatened by this,” Wolf said.