Saucon Valley students returned to class for the start of the 2021-2022 academic year Monday, with some wearing masks voluntarily while others–including potentially unvaccinated students–went to school maskless. Under the district’s updated COVID-19 health and safety plan, masks are only required for K-6 students when community transmission of the disease is deemed “substantial,” and they will only be universally required if it is deemed “high” in Northampton County.

Under a revised district health and safety plan approved by the Saucon Valley School Board last week–from among five possible plans and following a special meeting that lasted more than five hours–students in the district will be required to wear masks again if community transmission of COVID-19 in Northampton County reaches levels that are deemed “substantial” or “high.”

Saucon Valley students and teachers returned to classes Monday with the option to wear face masks under the updated guidelines (see below for the complete updated guidelines), which include four transmission tiers that are defined according to the rolling average number of cases per 7-day period, per 100,000 residents:

Under the district’s updated guidance, masks are optional for students and staff when the case numbers are such that the county’s transmission rate is considered low or moderate, except in “fully masked classrooms where students and staff are required to wear a mask.” District superintendent Dr. Craig Butler said there are one or two fully masked classes per grade level in kindergarten through sixth grade. The number of students in each class ranges from being “in the mid teens to the mid-high twenties,” he said.

Since the start of the pandemic in March 2020, the highest the daily new case average has reached is 93.9 new cases per day, per 100,000 Northampton County residents (or approximately 287 new cases per day total), which was on Dec. 10, 2020, according to CovidActNow.org, a website which uses statistical data compiled by the New York Times.

All students as well as bus drivers are required to wear masks on school district-owned transportation, under the approved health and safety plan. There is an exception for a student who has a health or medical exemption submitted through standard district procedures, and drivers may forgo masking if there are no students on their bus.

In response to a question, Butler said in an email that the specific thresholds the district’s plan includes “are aligned with CDC guidance.”

He said the district will review case numbers weekly and, “(he) will communicate with parents weekly as well in the case that masking requirements change.”

He also confirmed there are no special provisions in place for COVID mitigation or testing among student-athletes, including those who play contact sports such as football.

Although Saucon Valley’s new mask policy is less restrictive than those in place or under consideration in some school districts throughout the region–including the neighboring Southern Lehigh School District, whose board of school directors will consider universal masking until at least late September Monday at 7:30 p.m., per their meeting agenda–it is more restrictive than an earlier version of the health and safety plan, which was approved by the school board July 27; the same day the U.S. Centers for Disease Control updated earlier guidance by backtracking and recommending the use of masks indoors, even by vaccinated individuals.

Under that earlier approved version of the plan, masking was optional for all students and staff, regardless of the rate of COVID transmission occurring in the community.

Since late July caseloads and infection rates have climbed, at least in part due to declining vaccination rates in Northampton County and around the nation. The increasing predominance of the more highly-transmissable Delta variant has also played a role in the start of a fourth wave of the pandemic, health experts say.

Despite the worsening statistics, many parents who spoke at the Saucon Valley School Board’s lengthy Aug. 16 meeting criticized any type of mandatory masking for students, for a variety of reasons.

The criticism was also in spite of the fact that masks were required all last year, when a statewide mask mandate implemented by former state health secretary Dr. Rachel Levine and signed by Gov. Tom Wolf was in place. That mandate expired June 28, and Wolf has said he is leaving COVID mitigation strategies to the discretion of individual districts.

In the meantime, much opposition to masking has erupted, particularly in public schools.

“I want to highlight continued confirmation of the following,” said Lower Saucon resident Lynn Kasper. “Masks are ineffective. Masks have repeatedly been demonstrated as harmful. Masks are investigational medical therapy. They’re approved for emergency authorization use only, which means that informed consent is necessary by the wearer. That is the law.”

Similar claims have been repeatedly debunked since at least February, when Reuters reported on viral social media posts filled with misinformation about the use of masks.

The claims that policies mandating masks could be seen as a violation of either the Nuremberg Code or the UNESCO Universal Declaration on Bioethics and Human Rights are absolutely false. These policies are neither medical research (nor) medical interventions. They are public health interventions. Just like laws that prohibit smoking on planes or in restaurants, these policies are intended to protect innocent individuals from being exposed to potentially harmful toxins or viruses that could be spread by others.

Kasper claimed there have been “hundreds of mask studies related to the influenza transmission done over several decades” and that “it is a well-established fact that masks do not stop viruses.” She further claimed that “cloth face masks actually increase influenza-linked illness; bacteria are 50 times larger than virus particles (and) as such virus particles can enter through mask pores, yet bacteria remain trapped inside the mask, resulting in the mask-wearer continually exposed to the bacteria.”

An October 2020 story published in The Atlantic noted that “every kind of face mask has been proved, in study after study, to slow the spread of COVID-19, with N95s being the most effective. To name just one example, two stylists worked at a hair salon in Missouri while infected with the coronavirus, but none of the 139 clients they saw got sick, because everyone wore a mask.” And Reuters reported in a “fact check” story published earlier this month that a viral news story about masks purportedly endangering children was based on a research letter published by the Journal of the American Medical Association (JAMA) Pediatrics in June that was later retracted because the editors of the journal determined that “the authors did not provide sufficiently convincing evidence to resolve these issues, as determined by editorial evaluation and additional scientific review.”

Kasper accused the board of “engaging in (a) whole-school clinical experimental trial.”

Ed Novak, a Hellertown resident, told the board it should listen to Kasper over leading national health experts such as Director of the National Institute of Allergy and Infectious Diseases and Chief Medical Advisor to the President Dr. Anthony Fauci, about whom he repeated a claim that has been proven to lack context.

“She had facts and figures and studies done. She had the real information. Not what somebody said,” Novak said of Kasper, who didn’t identify herself as a doctor or scientist. “Dr. Fauci said, ‘masks don’t work.’ The masks don’t work. The viruses go through them. Everybody knows it, but they’re not listening. They’re either American or Communist.”

Novak then questioned the politics of the board members in attendance, holding up his hand and moving it across the room in the direction of the board as he said, “I can tell by looking at you which ones are Americans and which ones are Communists.”

Jennifer Schmell, of Hellertown, said the board should side with the majority of parents who took a parent health and safety survey in which she said 70 percent of respondents said they don’t want their children to be required to wear masks. She said that with the exception of Allentown, Bethlehem and possibly Easton, most area school districts are implementing optional masking for students.

Not all parents favored an approach prioritizing personal freedom over the recommendations of public health authorities, however.

Lawrence Opthof of Lower Saucon Township urged the board to “follow the science that’s spelled out by the CDC.”

“Who wants to say my kid is unlucky enough to get really sick and end up in the hospital and on a respirator or whatever happens?” he asked. “Even if you beat the disease there’s a good chance you’re going to have a lot of problems afterwards. Who wants to expose their kids to that?”

He said failure to follow the science could also expose the district to legal ramifications.

“If somebody gets good and sick and you’re not following the CDC or the science, somebody’s going to sue somebody. That’s what it’s going to come down to,” Opthof said. “Because when you’re talking about the kids getting hurt, you’re talking a serious issue here.”

Hellertown resident Donald Carpenter told the board that, “the way the world works now, everyone’s going to have their own set of facts.”

“The most important thing that I could relay to you today, is that no one in this room is a qualified medical expert, and no one you talk to has the range and breadth of experience as the nation’s top health experts, and so while it is important to keep these decisions local, the CDC has made it very clear what their recommendations are: It is universal masking. It is screening for sports,” he said.

Linda Salmon, a parent from Lower Saucon Township, suggested that students under 12 be masked “until the situation changes” because they are unvaccinated and because of the rise of the Delta variant.

“While that’s inconvenient, it’s uncomfortable, it’s not life-threatening, and it protects them as well as anyone that they could go home to and bring the virus to,” she said.

“In regards to the 12-and-up population, I’d like you to consider asking for a ‘declaration of vaccination’ status,” Salmon told the board. “Those who are vaccinated–they can go unmasked–and maybe have a little more freedom and privileges, and those who are unvaccinated have to be masked. Not only does that protect them, but it has the added benefit of incentivizing for people to go out and get these shots. I think it’s a win-win.”

She added that she had to tell the district the vaccination status of her child who attends high school because they participate in sports, and said she doesn’t understand “why the idea can’t translate to the larger population.”

Many Saucon Valley students remain unvaccinated because the vaccine has not yet been approved by the U.S. Food & Drug Administration for use in children under the age of 12.

The next Saucon Valley School Board meeting will be held Tuesday, Aug. 24 at 7 p.m. in the high school Audion room. The meeting will also be streamed live on YouTube, where meeting recordings are uploaded to the district’s channel.

Among the items highlighted on a draft version of the agenda is a discussion regarding students utilizing the school cafeteria under the health and safety plan.

Below: The version of the health & safety plan that was adopted by the Saucon Valley School Board at its Aug. 16, 2021 meeting. 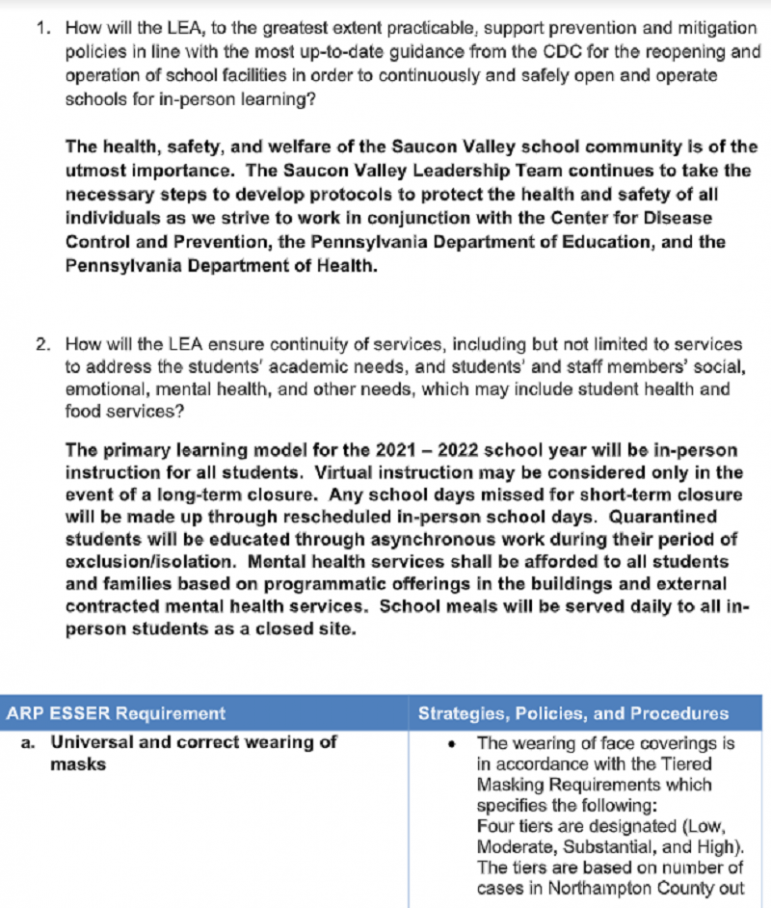 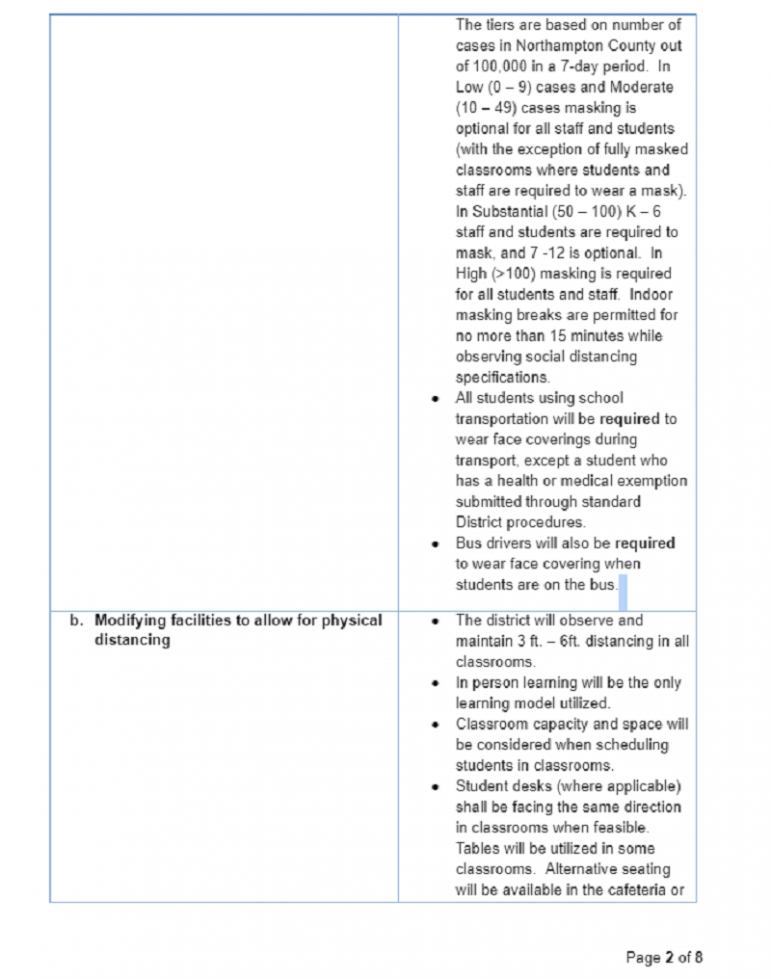 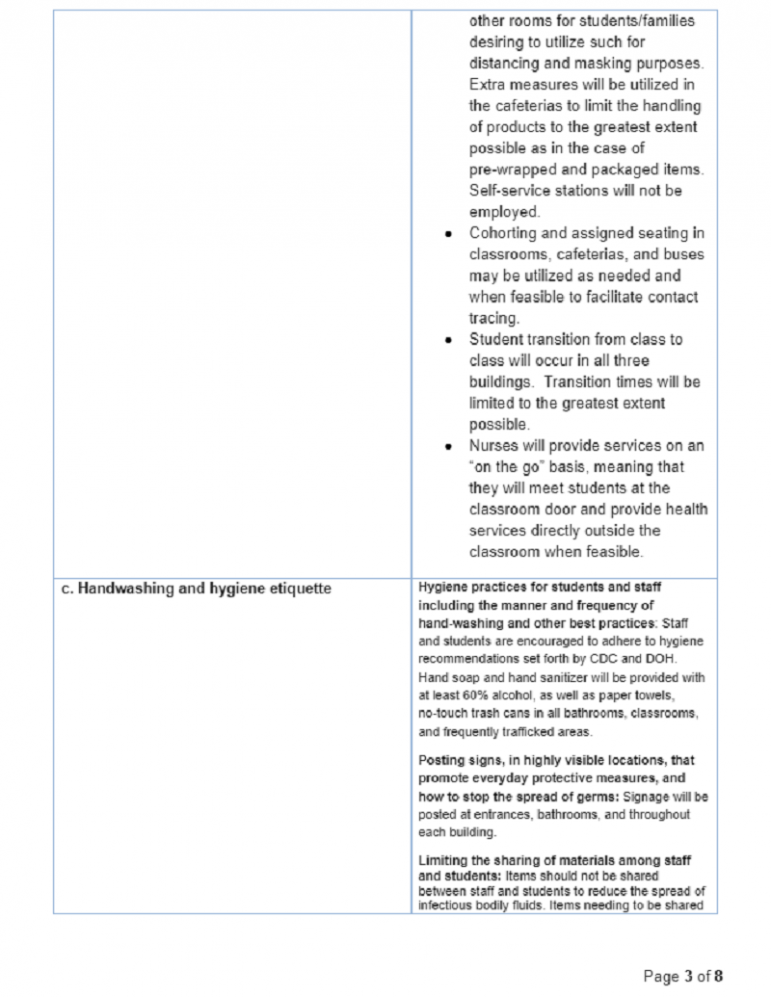 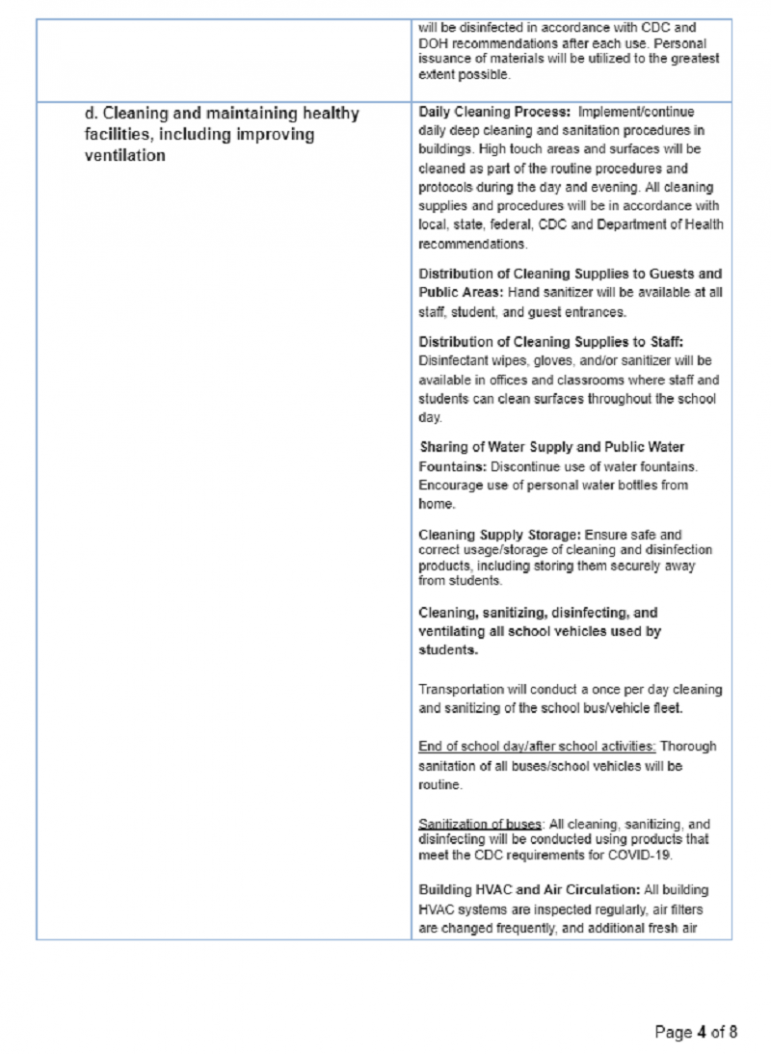 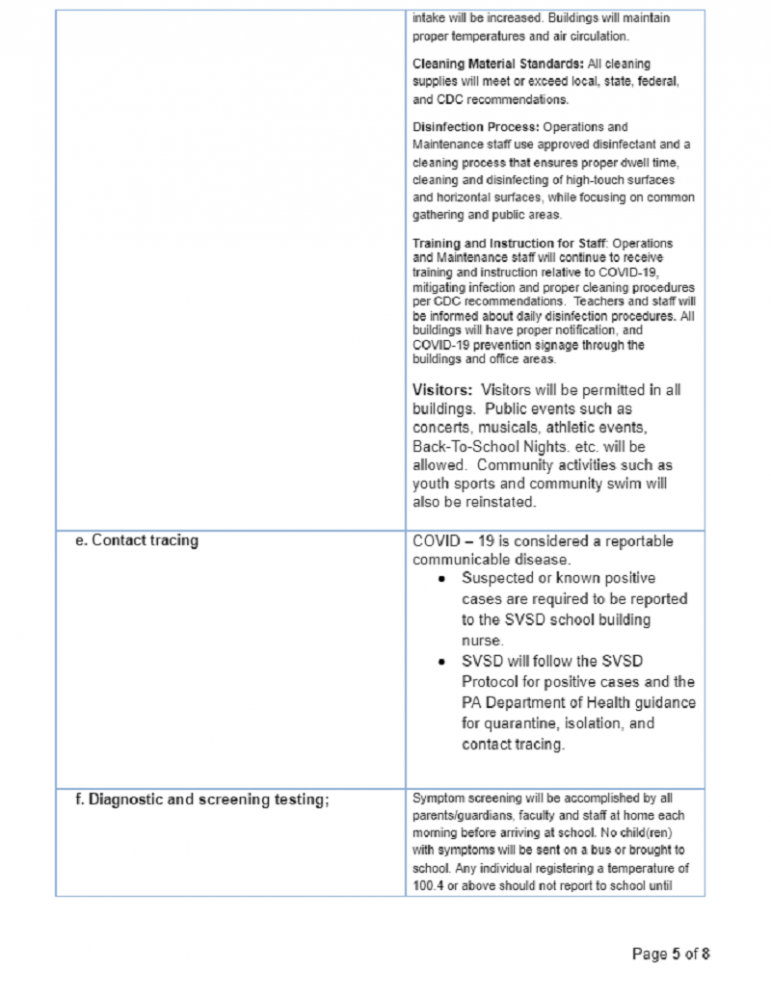 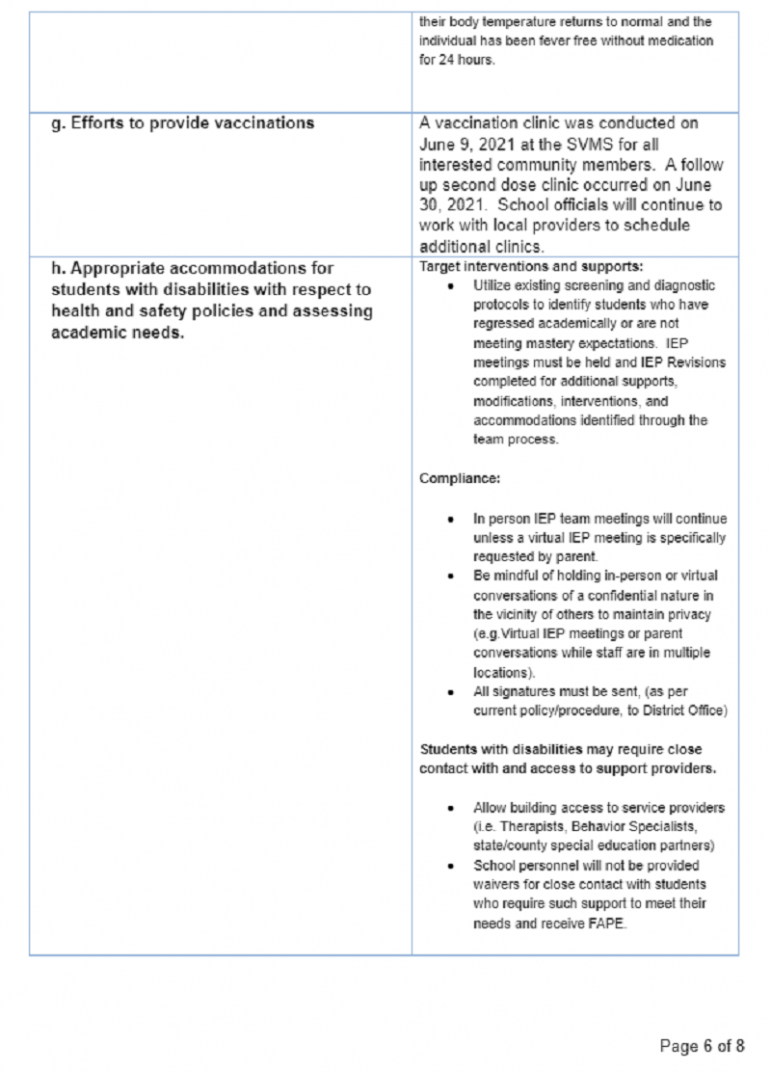 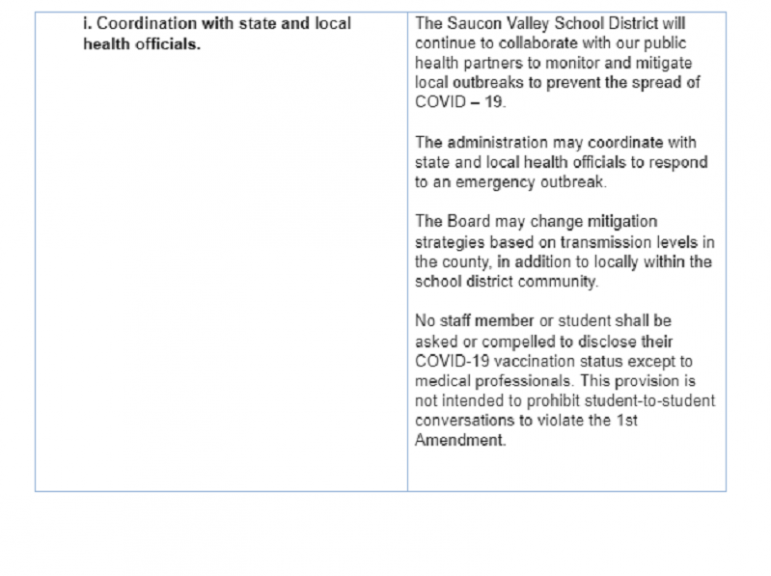