Thursday’s Veterans Day service organized by Hellertown American Legion Post 397 and held at Union Cemetery was a time to reflect on the many sacrifices all who’ve served have made for their country.

“Veterans Day is sacred and should be observed every day,” Legion Commander Eric Medei told the dozens of people who gathered for the 10:30 a.m. service in the grove near the cemetery entrance.

Medei said his leadership role at the Legion is rewarding but “humbling” due to the fact that “every day I’m surrounded by heroes.”

He began his recognition of those individuals by recalling the service of former commander Geoff Baer and former Legion chaplain Robert Edwards, both of whom died earlier this year. Baer served several tours of duty in Vietnam–where he earned three Bronze stars–and Edwards was a Korean War veteran, Medei noted.

He went on to highlight the service of many of the Legion members in attendance at the service, some of whom now have children and even grandchildren following in their footsteps.

“It’s the veteran who keeps us safe,” Medei reminded attendees. “For those veterans who never made it back, we owe you a huge debt of gratitude.”

Mayor David Heintzelman also addressed the gathering, and began his remarks by reminding those present about the borough’s two-year-old Hometown Heroes flag program, which he said will soon honor a second round of heroes. He encouraged anyone interested in having a family member honored to contact the borough in the near future.

“Let us praise and respect all veterans, not just this day but all days, for they certainly deserve that,” Heintzelman said.

The keynote speaker at this year’s Veterans Day service was Hellertown Borough Councilman and U.S. Marine Corps veteran Andrew Hughes, who began his remarks by recalling what Veterans Day was like during his childhood.

Hughes said that this was at the tail end of the Vietnam War fifty years ago, when “too many folks wrongly forgot about Vietnam veterans and about Veterans Day.”

He recalled that his first Veterans Day as an active-duty Marine was just weeks after the terrorist bombing of a U.S. military barracks in Beirut in October 1983, in which more than 300 military personnel were killed.

“The terrorists killed 307 military personnel who were deployed to the region for a peacekeeping mission,” Hughes said. “241 were American service members. Among those 241 fallen were 220 U.S. Marines, 18 U.S. Navy sailors and three U.S. Army soldiers.”

“Veterans are from all parts of our country, from different religions, races and  genders; they too come from all walks of American life,” he said. They are parents, children, grandparents, friends, neighbors and coworkers; and they are all important parts of their communities.”

“So how do you say, ‘Thank you,’ to a veteran on Veterans Day? It is simple,” Hughes said. “When you encounter a veteran, and there are many, just convey, ‘Thank you for your service.’ It is really that simple.”

The service concluded with Legion Ladies Auxiliary President Connie Quier placing a floral wreath at the veterans memorial in the cemetery, which was followed by a military salute performed by the Legion Honor Guard.

Taps was performed by Tommy King, and the Hellertown-Lower Saucon Community Chorus provided patriotic choral music for the event, which was followed by a luncheon at the American Legion post. 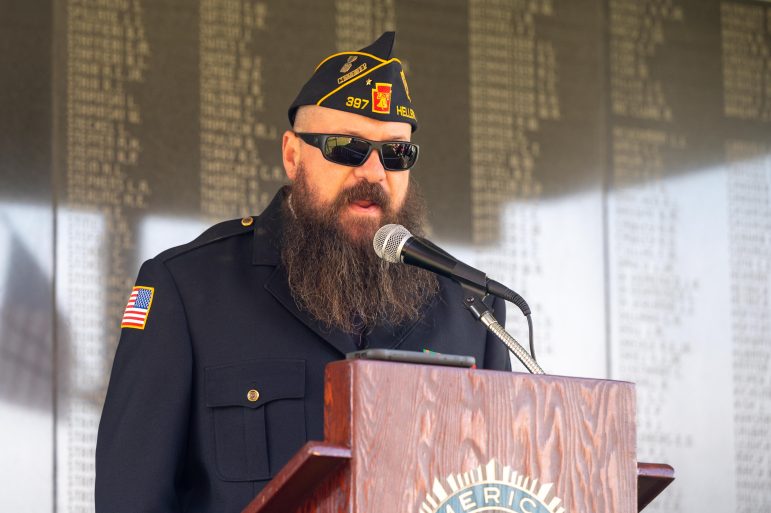 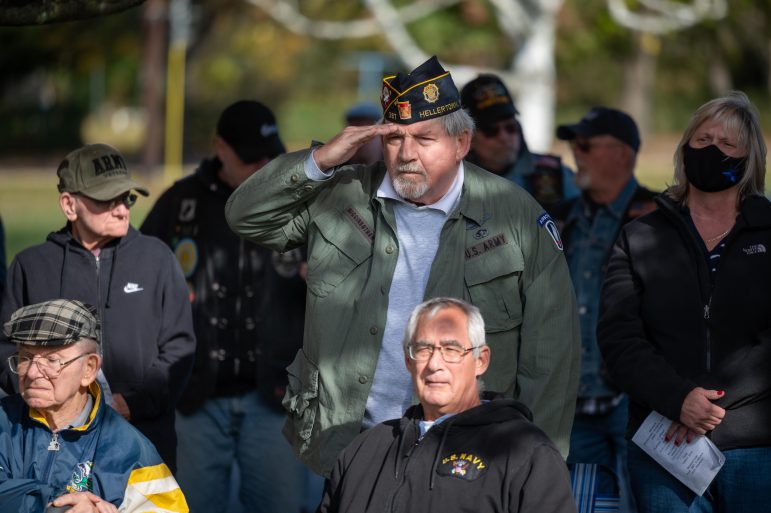 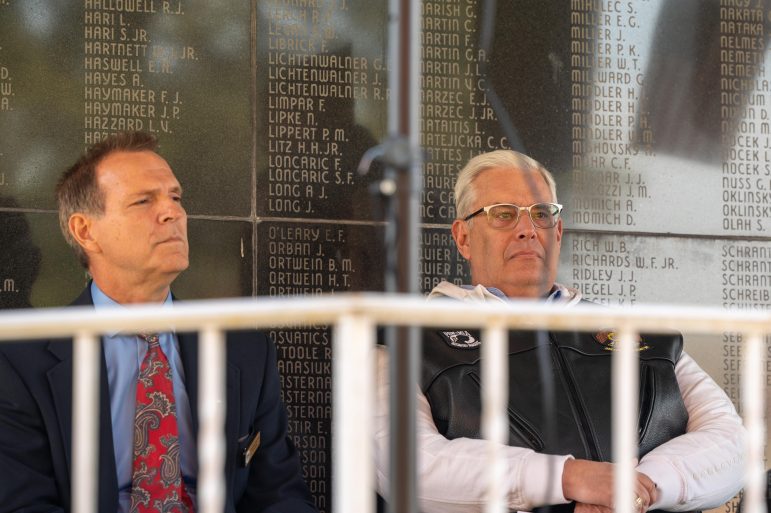 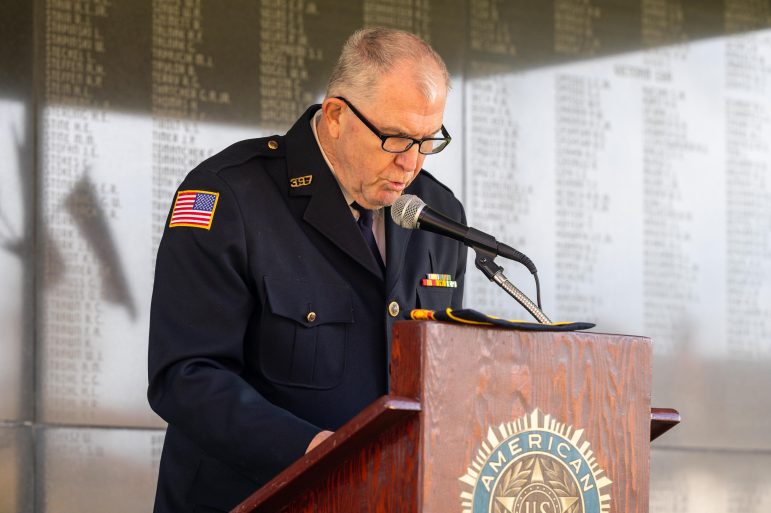 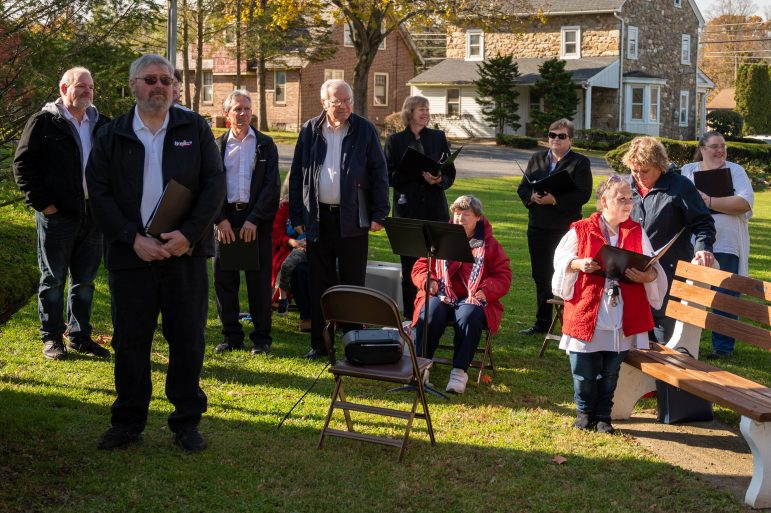 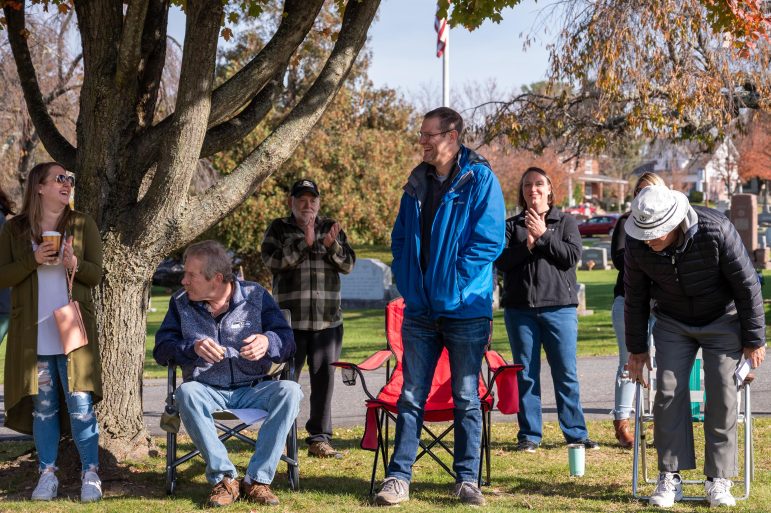 U.S. Navy veteran Chris Nolf of Hellertown is recognized for his service during Thursday’s Veterans Day service in Hellertown. Nolf survived the October 2000 bombing of the U.S.S. Cole in Yemen, and is the father of a U.S. Marine. 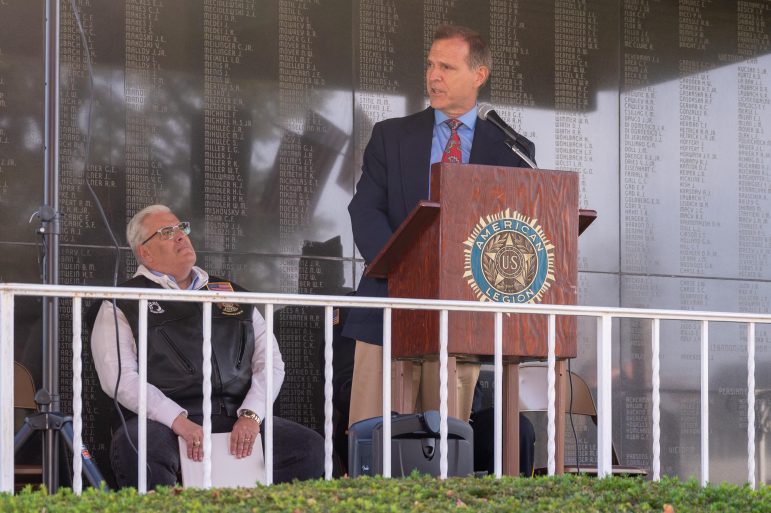 Hellertown Borough Councilman Andrew Hughes reflected on Veterans Day and what it means to him during his remarks at Thursday’s service. Looking on is Hellertown Mayor David Heintzelman. 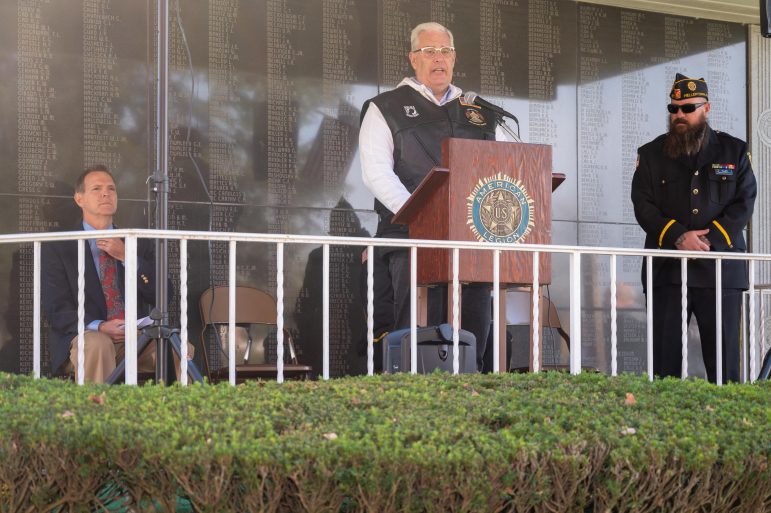 Hellertown Mayor David Heintzelman told Veterans Day service attendees that veterans “lay down much more than you can ever imagine.” Heintzelman thanked those who have served, whose lives he said “are changed forever.” 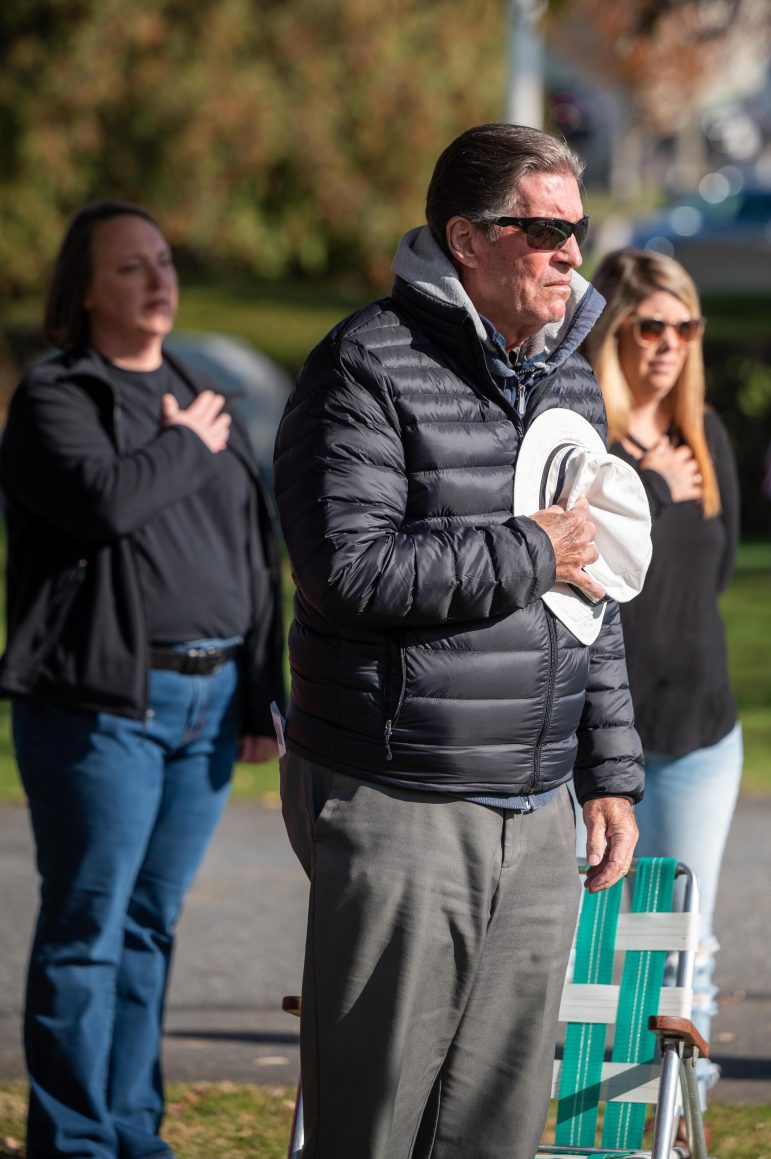 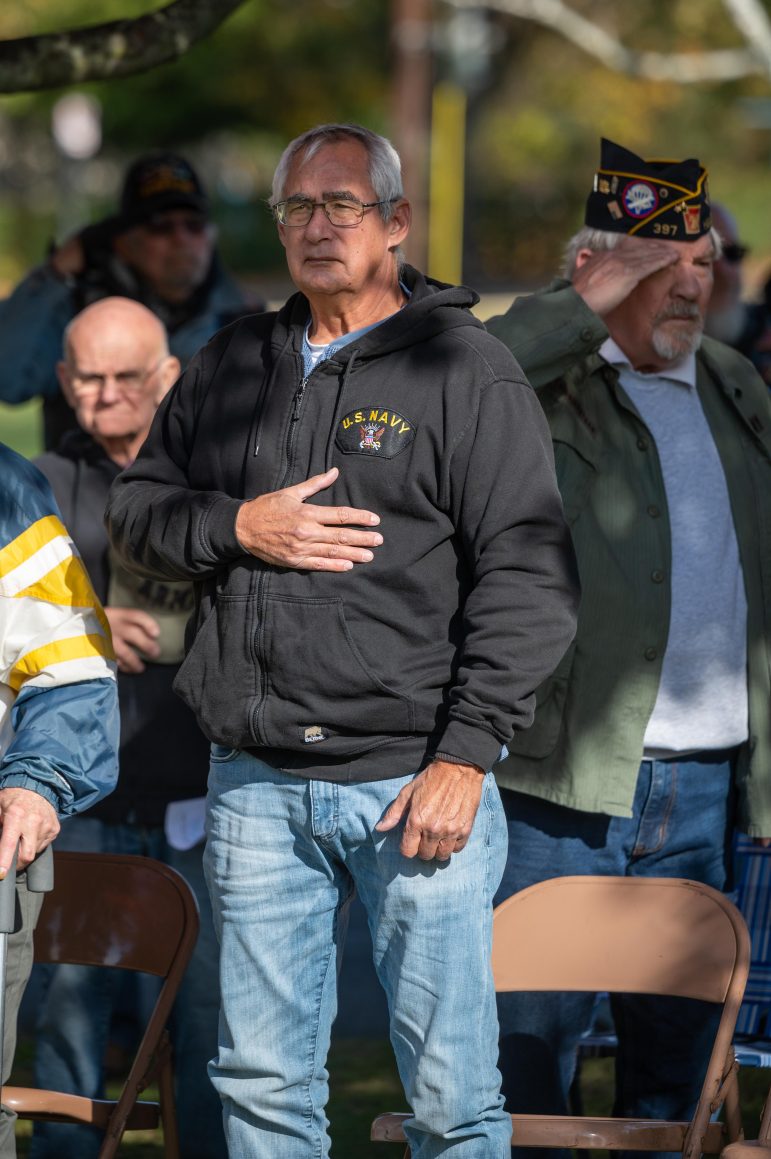 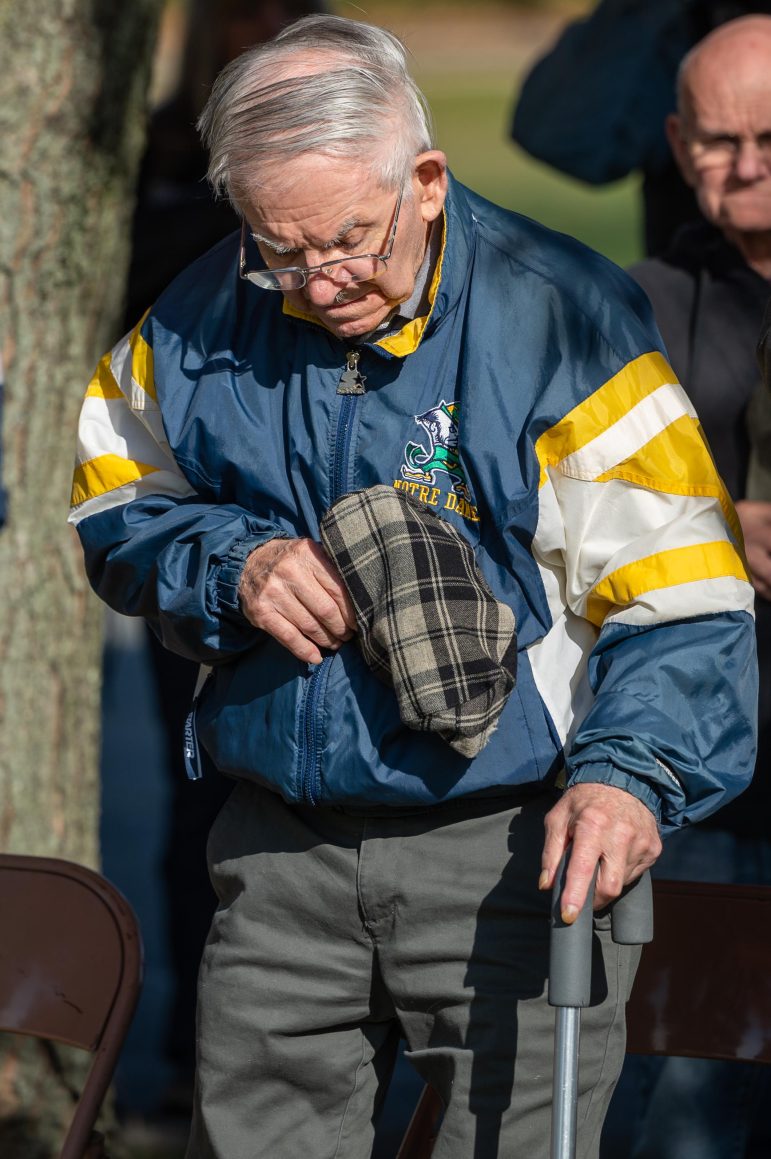 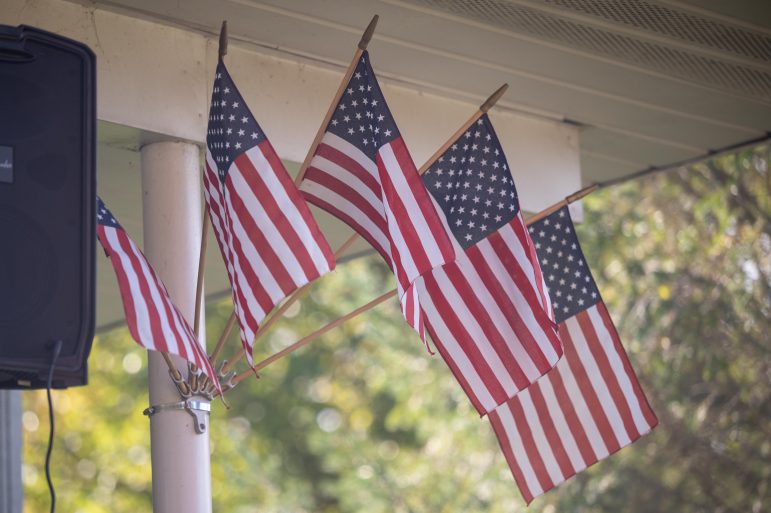 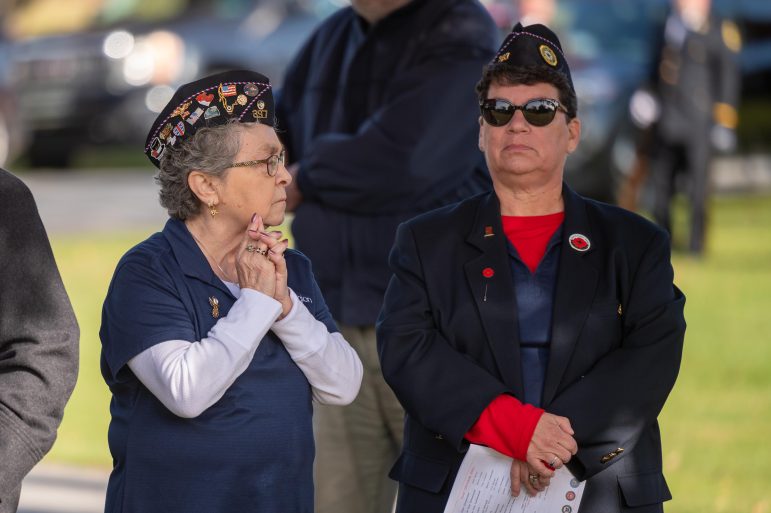 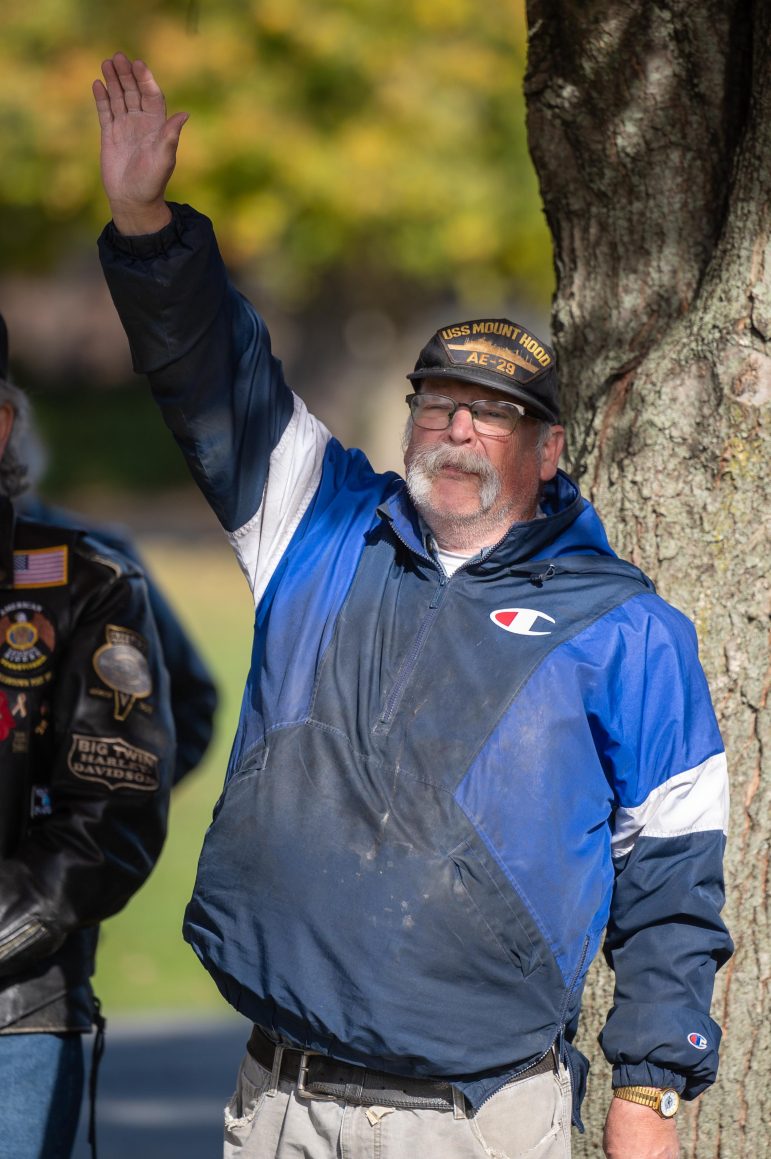 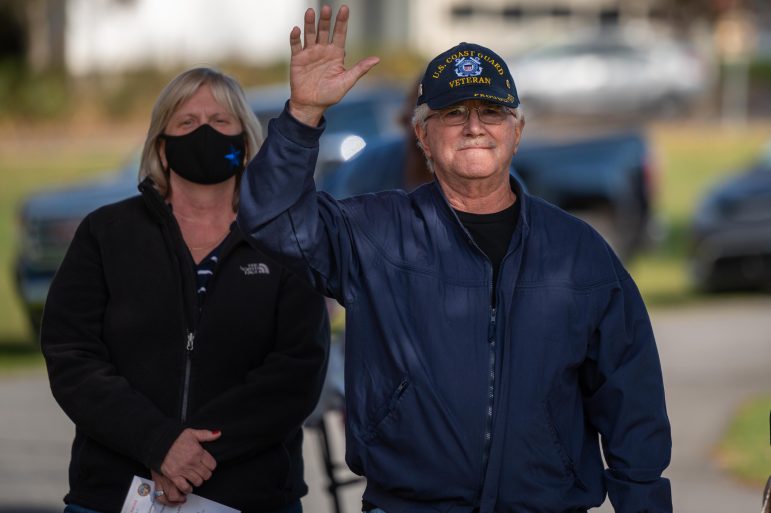 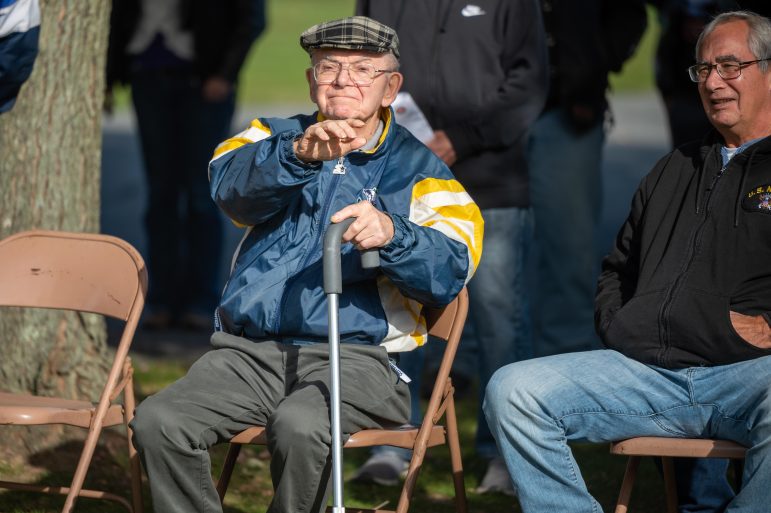 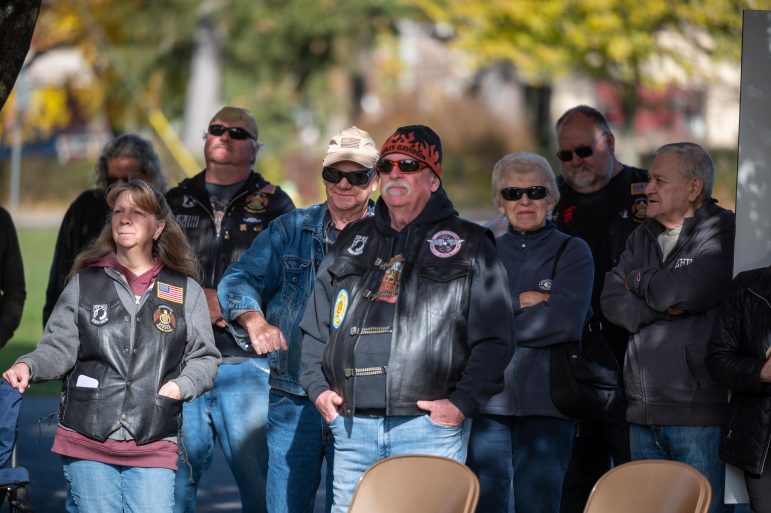 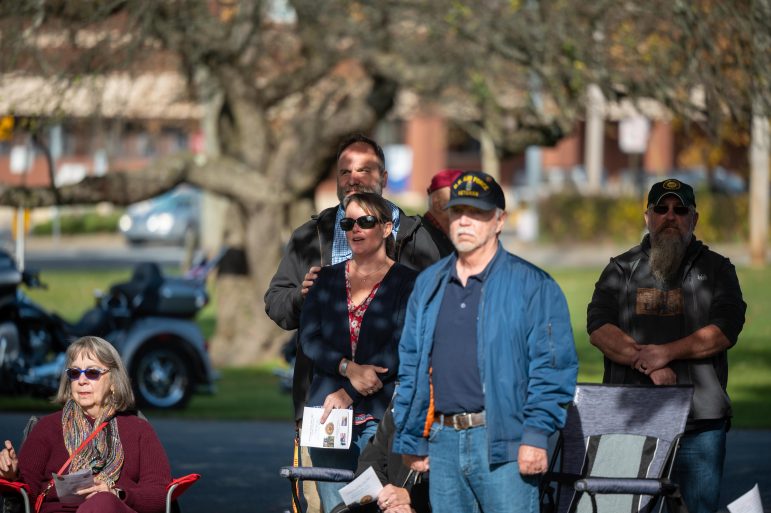 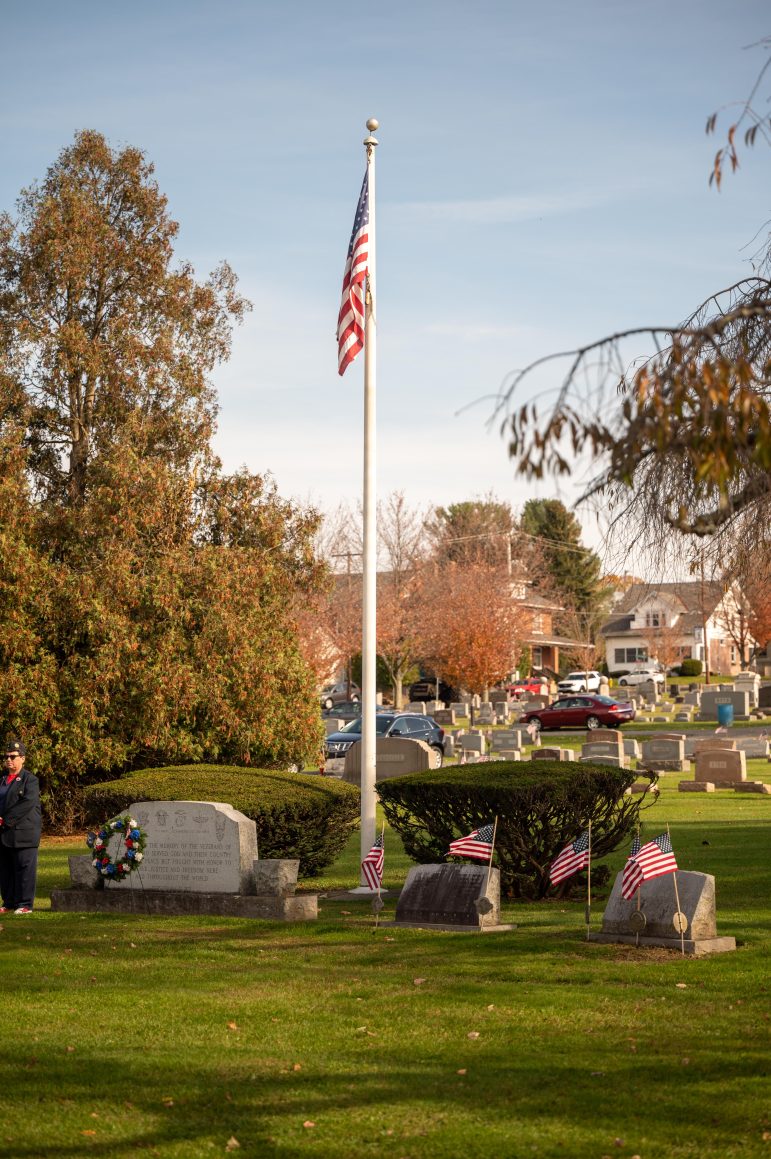 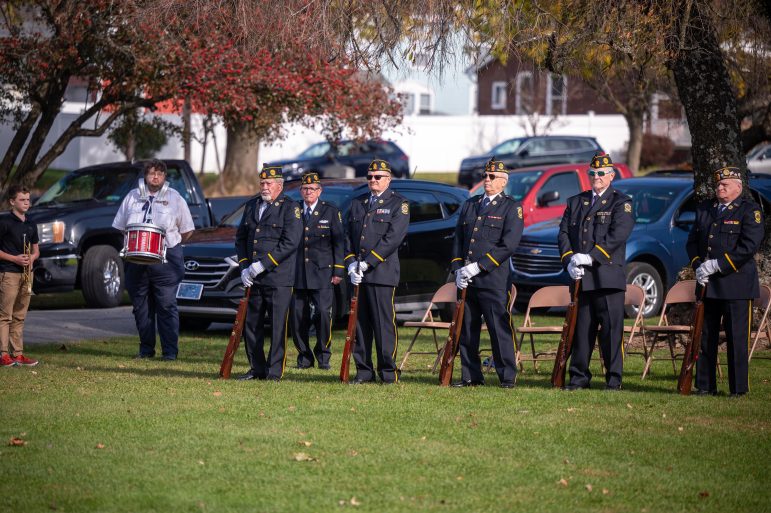 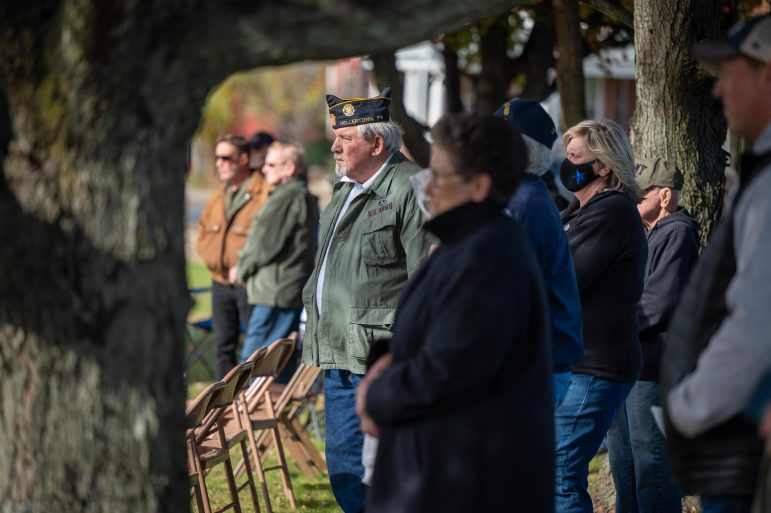 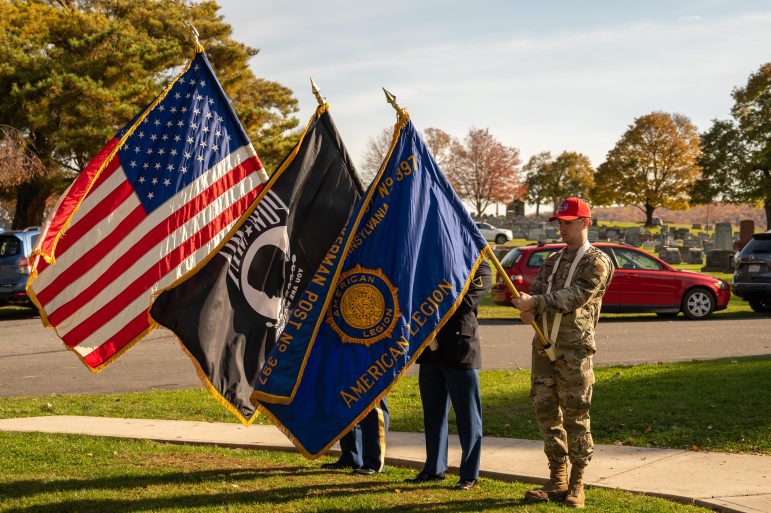 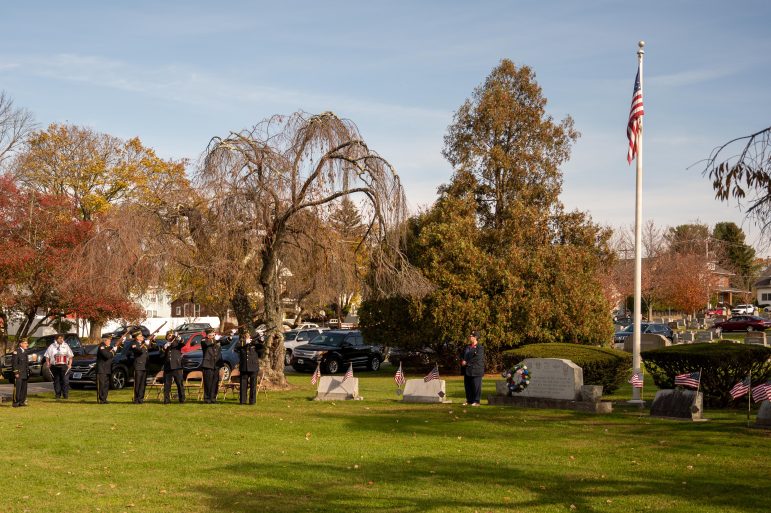 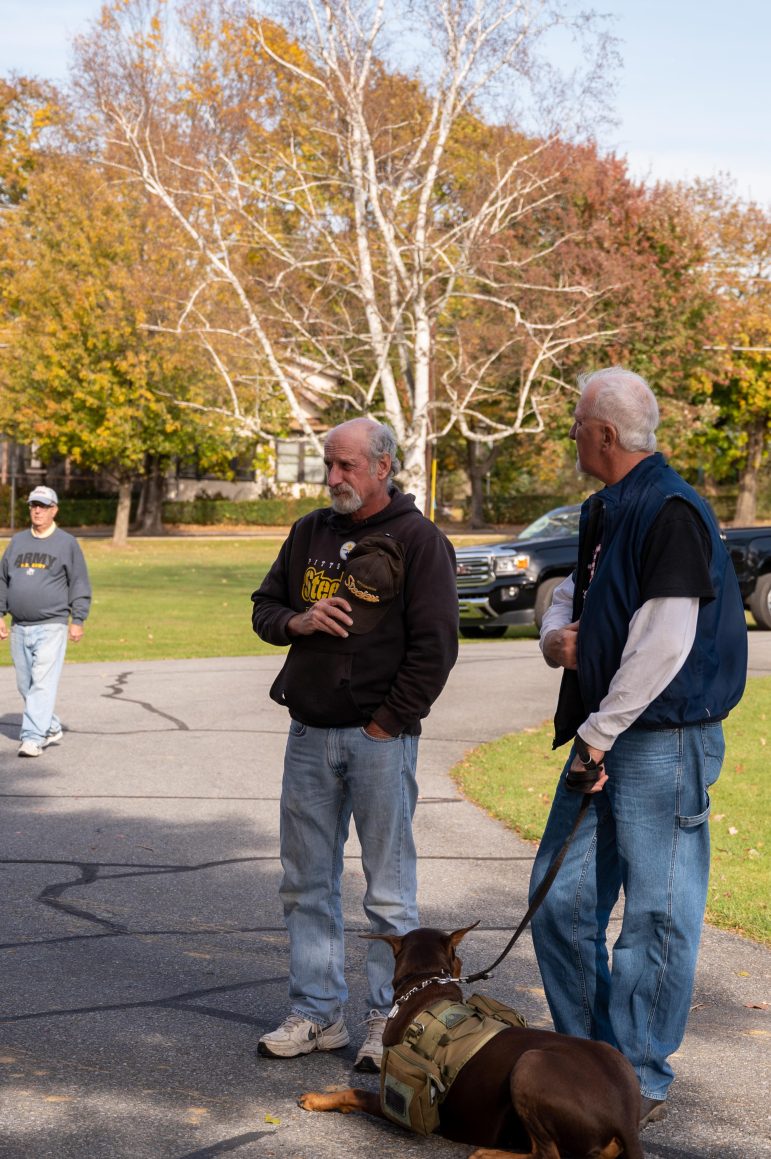