Note: The following opinion-editorial is by State Sen. Lisa Boscola (D-18), whose district includes parts of Lehigh and Northampton counties, including the city of Bethlehem, Fountain Hill borough, Hellertown borough and Lower Saucon Township. Under the redistricting plan that is currently proposed in the state Senate, West Bethlehem and Fountain Hill–which are in Lehigh County–would become part of the 14th senatorial district while the rest of Bethlehem city, Hellertown, Lower Saucon Township and several other communities would remain part of the 18th district.

For the better part of 20 years, I have been advocating for an independent citizens commission to fairly draw our legislative lines. The recently released Pennsylvania State Senate Map only reinforces everything that I have been saying. No independent commission would have suggested the map proposed for the Lehigh Valley.

According to the Chairman of the Legislative Reapportionment Commission, Mark Nordenberg, the Majority Leader and Minority Leader of the Senate “negotiated the Senate map.” These leaders have one objective in mind–to increase their respective party’s power and influence in the Senate chamber. We’d be lucky if the best interests of the voters and communities were considered. All of the commission members are from western Pennsylvania and Philly and don’t understand anything about the Lehigh Valley or care about what is in our best interest. Their goals do not align with drawing fair and responsible maps in accordance with Constitutional mandates.

Every 10 years, we in Northampton County are reminded that the losers in this game are the voters. Twenty years ago, redistricting brought the Lehigh and Northampton County portions of Bethlehem together, but removed Easton out of the Northampton County seat and had Easton represented by someone from Montgomery County. Ten years later Easton was back along with the entire city of Bethlehem under one Senatorial district and this needs to be preserved.

Last week, we were reminded of what happens when leaders draw maps behind closed doors. There is a clear and unmistakable effort to merge Allentown and Bethlehem into one senatorial district in an effort to create a “Super Democratic seat.” This is bad for the voters, both cities and the Lehigh Valley as whole. All of Bethlehem belongs in a Northampton County Senate district. Northampton County is large enough to be its own Senatorial district. Diluting the voices of our largest cities and our largest school districts is not in the best interest of our communities. 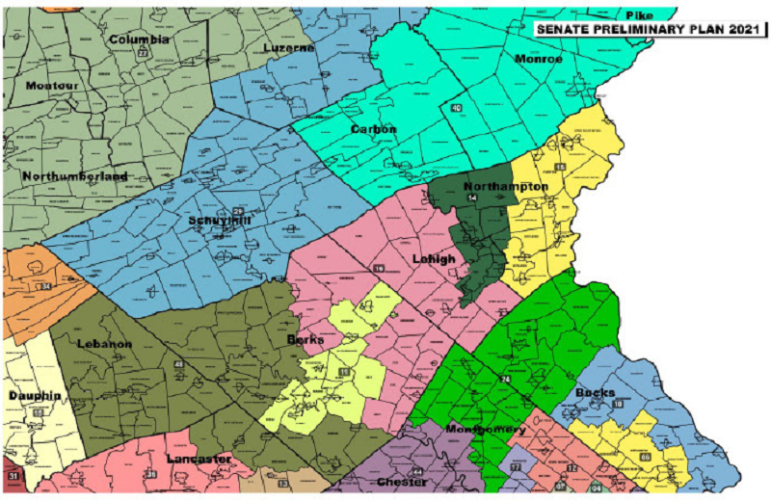 A map shared by state Sen. Lisa Boscola (D-18) shows the redrawn districts of the Lehigh Valley, according to a redistricting plan that is currently before the Pennsylvania State Senate. The newly-drawn 14th district is shaded dark green, at center.

Allentown and Bethlehem are very different communities. They have different needs and different challenges. Currently, they do not compete head-to-head for grant funding, school funding and the other issues that come before the State Senate. This is a good thing because each can be more successful. Pitting both of the cities against each other in one district will weaken their leverage for grants and other state resources.

The Pennsylvania Constitution mandates that municipalities shall not be broken up unless “absolutely necessary.” The 14th Senatorial district created as part of this preliminary map breaks up both of our largest cities for no reason. The plan carves out three precincts in West Allentown and merges the remaining parts of Allentown with West Bethlehem and other municipalities and puts them into a new district for purely political reasons. During the reapportionment meeting it was clear that some of the Commission members wanted to merge the two cities completely.

We must use our collective voices to tell Harrisburg this is not acceptable–thanks, but no thanks! There is no need to break up either city, let alone it being “absolutely necessary,” and it certainly is not in the Lehigh Valley’s best interest to merge these cities into one district. All of Bethlehem belongs in the 18th Senatorial district in Northampton County. Bethlehem is the anchor of Northampton County.

I intend to make my voice heard by testifying at an upcoming hearing and ultimately suing if absolutely necessary.

Letters to the editor and op-eds should be about subjects of general local interest. They may be submitted to the publisher, Josh Popichak, at josh@sauconsource.com. All opinion is published at the discretion of Saucon Source editorial staff.