HARRISBURG — A proposed redrawing of the Pennsylvania House redistricting map improves on fairness metrics as mandated by the state constitution, while creating more districts that could be won by Democrats.

The preliminary map was approved in a hotly-contested, split vote by the five-member Legislative Reapportionment Commission. The two Democratic legislative leaders on the panel voted yes while their Republican counterparts voted no, with House Majority Leader Kerry Benningoff (R., Centre) calling it a partisan gerrymander. 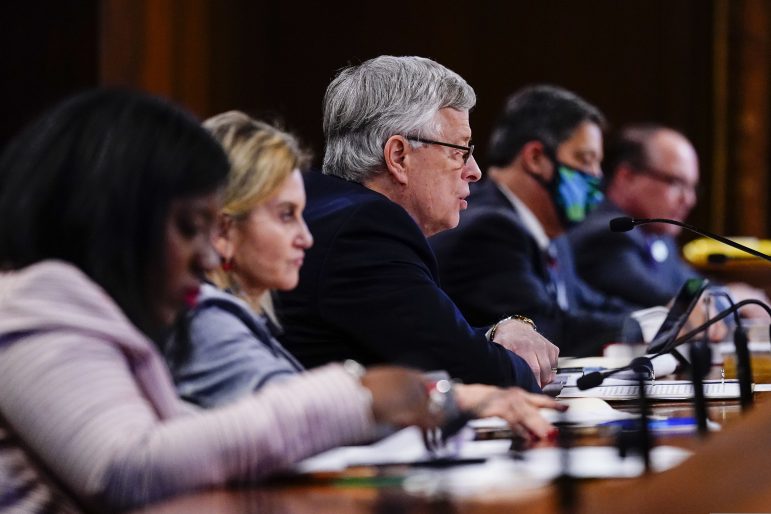 The preliminary map was approved in a hotly contested, split vote by the five-member Legislative Reapportionment Commission.

“The main goal of the constitution is not to ensure that there is a fair fight between leaders of opposing parties every 10 years, but instead to facilitate what will be a good reapportionment result for the people of Pennsylvania,” he said.

The public has until Jan. 16 to provide feedback, while the panel plans to hold hearings before it amends the map and takes a final vote. The map could then be challenged in court. The state’s congressional map is created and approved in a separate process.

While Republicans believe the proposal is unfair to members of their party, fairness standards as mandated under the state constitution and embraced by the courts show it represents an improvement over the current map.

The Pennsylvania Constitution explicitly lists four requirements for state House and Senate districts: compactness, contiguity, minimal splits and equal population. Here’s how the proposal stacks up on those and other measures:

>> MY MAP: Search now to see your old and new legislative districts

Compactness looks at how close together all parts of a district are. It’s meant to prevent protrusions that would isolate some residents of the district. The Pennsylvania Constitution mandates that districts be compact, but it does not specify a metric or minimum threshold to measure districts.

The proposed House plan has an average level of compactness, scoring better than the current map on two commonly used metrics: the Polsby–Popper test and Reock scale. Scored on a scale from 0 to 1, where 1 equals maximum compactness, the proposed plan hits 0.35 on the Polsby-Popper scale and 0.46 on the Reock scale. The current House map scores 0.27, and 0.36, respectively. 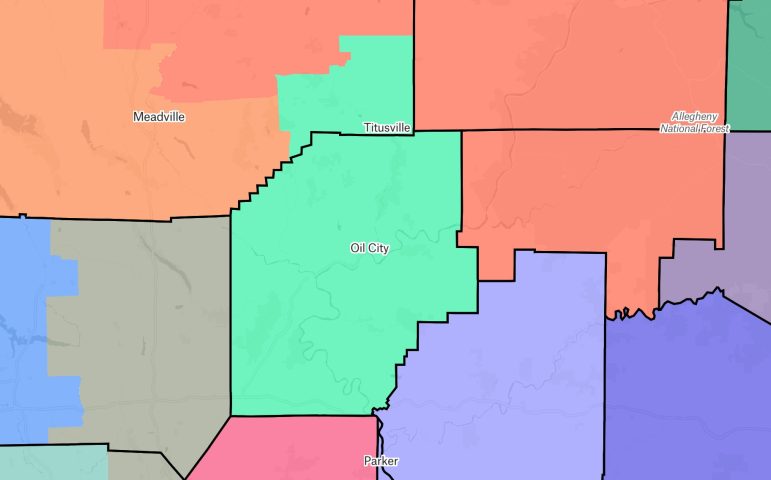 Proposed District 64 (shown in green) meets the standard for compactness, keeping Venango County whole and using only a geographically close and compact section of a neighboring county.

Contiguity means that there is no part of a district that is detached from the rest or completely isolated. The House plan fulfills this metric.

This metric is intended to keep communities together. Mapmakers aim to reduce county, municipal and voting precinct splits, though most tend to focus on reducing the first two.

The Princeton Gerrymandering Project, a nonpartisan group that conducts data analysis on district plans across the country, gave the map an A grade for county splits. Of the 45 counties that were split a total of 184 times, 40 of them were too large to fit their population into a single district. The current map splits 50 counties over 200 times. 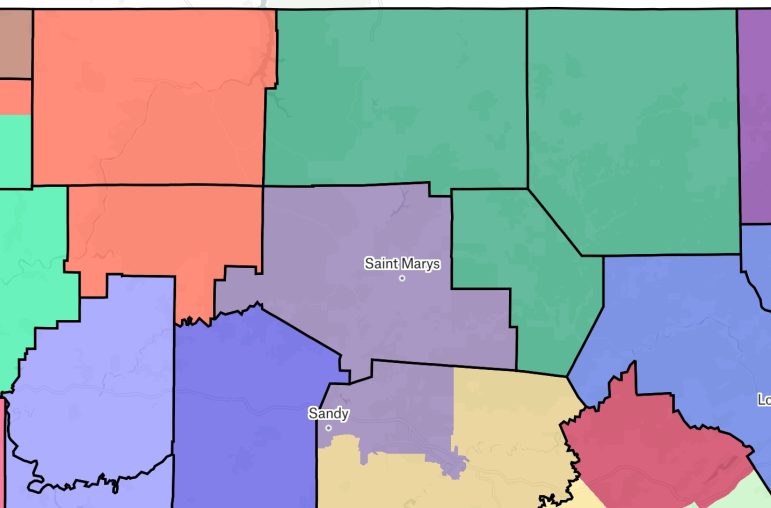 The Princeton Gerrymandering Project gave the map an A grade for avoiding county splits when possible.

The Pennsylvania Constitution mandates that each district have approximately the same number of residents. Per a U.S. Supreme Court case from the 1980s, the commonly accepted deviation from this standard for an individual legislative district is over or under 5 percent of the ideal population size and 10 percent for the overall map.

The population deviation of the proposed map overall, 9.28 percent, is just under the permissible range established by the court. Nordenberg said in December this is one of the areas that he intends to improve upon when reviewing the maps over the next month.

Republicans are so far crying foul, accusing the panel of creating a partisan gerrymander in favor of Democrats. However, a look at various metrics shows the proposed map has a bias toward the GOP.

One such metric is proportionality, which looks at whether the likely results of elections in each district, based on past electoral data, would result in a group of elected officials that is reflective of the ratio of Democratic and Republican voters in the state.

The Princeton Gerrymandering Project looks at a variety of factors when assessing partisan fairness. One such factor is partisan bias, or the difference in seat share between the parties even if each party received 50 percent of the votes. In that regard, the map has a 1.7 percent Republican bias.

Another factor is the average percentage of votes that a party receives in order to win a district. The average should be relatively equal between parties. If one party receives a higher percentage of votes to win an election, it indicates their voters could be unfairly spread out or packed into a district. Under the “Packed Wins” metric, the proposed map favors Republicans by 3.8 percent.

Overall, the Princeton Gerrymandering Project labeled the map as a “mixed partisan advantage,” noting that it had a “slight Republican advantage when measured by metrics related to statewide voting, yet is more favorable to Democrats than geography alone.”

Competitiveness indicates how many districts have an even balance between Democratic and Republican voters, resulting in no party’s dominance in the area. Redistricting advocates believe that districts with this composition will be represented by legislators who are more responsive to voters, as their districts are less “safe.”

Properly representing communities of color, which are driving Pennsylvania’s population growth, was a topic of high importance during the Legislative Reapportionment Commission’s meetings.

When possible, mapmakers aim to create majority-minority districts–those where the majority population is constituted by a minority group.

The proposed House plan scores better than the current map does on minority representation.

But the proposed map also creates 19 districts with minority populations that are greater than 35 percent, creating a meaningful voting bloc, while the current map has only 13.