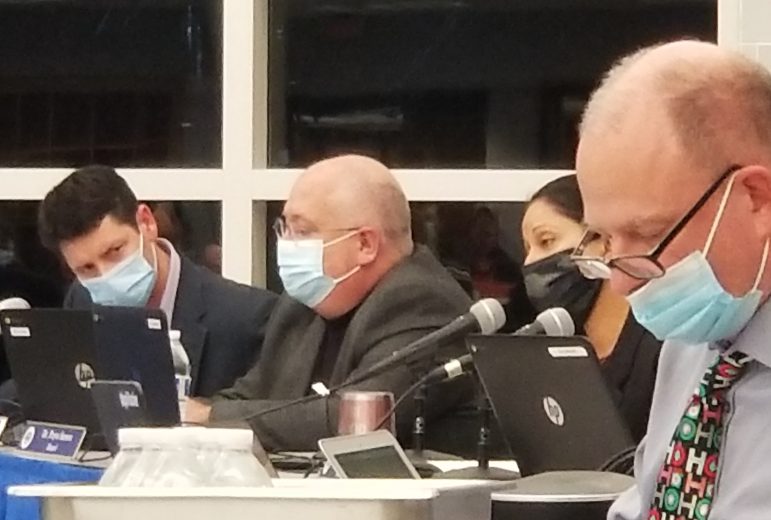 As COVID-19 case counts soar to record levels on the wings of the highly-transmissable Omicron variant, local health network officials are imploring school districts to keep kids masked in classrooms following the holidays. However, at least one local district is poised to end its mask mandate shortly after students return from the Christmas break.

In a news release issued New Year’s Eve, St. Luke’s University Health Network officials said they “support mandatory masking at area schools as children return to classrooms after the holiday” because of masking’s ability to help slow the spread of the virus.

“What we are experiencing now is our biggest Covid surge yet,” said Jeffrey Jahre, MD, St. Luke’s Senior Vice President of Medical & Academic Affairs and Section Chief Emeritus of Infectious Diseases. “If there was ever a time for area school boards, administrators and parents to get behind masking, it’s now.”

However the plea for masking may fall on deaf ears in districts like Southern Lehigh, where the nine-member school board considered dropping the district’s mask mandate as recently as Dec. 22.

The effort to end mandatory masking came before the board at an emergency meeting held Dec. 21, at which newly-elected board member Nicole King made a motion to do so.

The motion was ultimately defeated by a vote of 6-3 after several more moderate board members said they were uncomfortable with the idea of abandoning the mandate when the district’s approved health & safety plan said it would remain in effect at least until Jan. 10.

“To me you would have to have a very compelling reason (to end the mandate the following day),” said board member Jeffrey Dimmig. “I don’t think it’s fair to revisit it tonight, a few days before Christmas.”

The board’s vote followed several hours of public comment on masking, with a majority of parents and residents who spoke endorsing continued masking due to the uptick in cases. Among those who did so were nearly a dozen doctors who live in the district.

One of the board members to vote in favor of ending the mask mandate Dec. 22 was newly-elected member Christopher Wayock, who is a medical doctor.

“I really don’t want to be a doctor of fear, and that’s exactly what I heard there,” Wayock said in response to comments by members of the public in favor of continued masking.

“This is not a disease of children,” he claimed, adding, “I strongly recommend vaccines.”

Wayock, who is a doctor at St. Luke’s Physician Group, also read a statement at the meeting in which he attempted to distance his views from those of the health network:

“I understand that my opinions on matters concerning COVID-19 and masking within the District may not align with all residents of this community. I also understand that my professional career as a physician gives a level of credibility to my opinions that may lead those that disagree to question the voracity of my statements and others to directly question whether my employer, St. Luke’s Physician Group, espouses similar beliefs. I would like to set the record straight and unequivocally state that the opinions I provide as a Board member are mine and mine alone. They may not reflect the views or perspective of St. Luke’s Physician Group or any of its affiliates. As a Board member, I have not and I will not make any statements that purport to be that of St. Luke’s Physician Group and would ask that you, the community and my fellow School Board Directors respect my employment relationship and refrain from making or organizing allegations against me to my employer in an attempt to jeopardize that separate and distinct employment relationship.”

Wayock also cited “cancel culture” in the Lehigh Valley, which he said is why he believes his “employer received multiple complaints about me as an employed physician…within hours of this very meeting being announced.”

He said the anonymous complaints were not from patients for whom he has cared, but part of an effort by political opponents “to cancel my opinion, to threaten my position for my family and for our community and those who voted for me and all of the new members of this School Board.”

Wayock, along with King and two other new board members–Mary Joy Reinartz and Steven Maund–was elected as a member of the Facebook-group-turned-political-action-committee SLAFE (Southern Lehigh Advocates for Full Education), whose members have opposed many of the COVID health and safety precautions enacted by a previous district administration and board. Reinartz, who was elected board president Dec. 6, cast the third vote in favor of ending the mask policy at the end of the school day on Dec. 22.

King was repeatedly pressed about the timing of the emergency meeting, which was called partly at her request to consider both ending the district’s mask mandate and making changes to quarantine requirements for students.

“For the most part I do believe that masking is political theater,” she said. “I just think it’s a lot of politics… How long do we have to keep waiting? … The goal posts are constantly being changed, and that’s the problem, and that’s the point I’m trying to prove.”

Although case numbers at the time of the Dec. 21 meeting hadn’t yet exploded to the record levels that are currently being reported throughout the state and around the country, they were already trending upward; part of a well-documented new surge which prompted various speakers to implore the board not to make any abrupt changes.

Dr. Justin Psaila, Chair of Medicine at St. Luke’s University Health Network and a Center Valley resident, called the idea of removing a mask mandate in the middle of the latest surge “ludicrous.” He also blasted those on the board who had called the meeting, saying that their effort to remove health safeguards was akin to him calling police to complain about the noise from sirens as homes burned across the street from his and around town.

Another outspoken advocate in favor of keeping the mandate in place at least until January was Southern Lehigh teacher Matt Greenawald, who said claims that most kids aren’t wearing masks properly or at all in classes are false. In fact, he said many students keep their masks on even during recess because they have a desire to “follow the rules.”

Turning around, he gazed out across the cafeteria at numerous maskless meeting attendees before turning back to the board and saying, “I find it appalling that I look out at this audience tonight and so many people can’t do that,” he said of wearing a mask.

“Over the past couple days we have had a ton of emails from the community,” board member Kyle Gangewere said, noting that many had come from doctors.

Gangewere said she’d heard from only two doctors who don’t support mandatory masking in schools, “one of them here.”

“I don’t know what we’re doing questioning (the advice of most doctors),” she added.

The board members who voted in favor of keeping the district’s mask mandate in place at least until their Jan. 11 meeting were Maund, Gangewere, Dimmig, William Lycett, Emily Gehman and Priya Sareen, who is also a medical doctor.

In explaining their votes, several board members referred to the nearby Nazareth Area School District’s recent shift to a “mask-optional” policy, which led to a surge in cases, as well as a spike in cases that forced Bethlehem Area Catholic High School–which also ended mandatory masking–to shift from in-classroom education to virtual learning.

More information about COVID is available from the Pennsylvania Department of Health, the U.S. Centers for Disease Control and local health care providers, including St. Luke’s University Health Network, which has a coronavirus hotline at 1-866-STLUKES.

Numerous new case records have been set this week in Pennsylvania, with the Department of Health confirming more than 20,000 new cases on Thursday, Dec. 30 alone; a number that shattered a new record set just two days earlier.

Meanwhile, many pharmacies and grocery stores are advertising the fact that they are sold out of COVID-19 testing supplies, which is leading to long lines at testing sites.

Jahre also noted that people who go to a hospital emergency department or urgent care location may experience longer wait times because of the ongoing surge in Covid-19 Omicron cases.

“We ask people to be respectful to our staff, who are working diligently under very challenging circumstances,” he said.