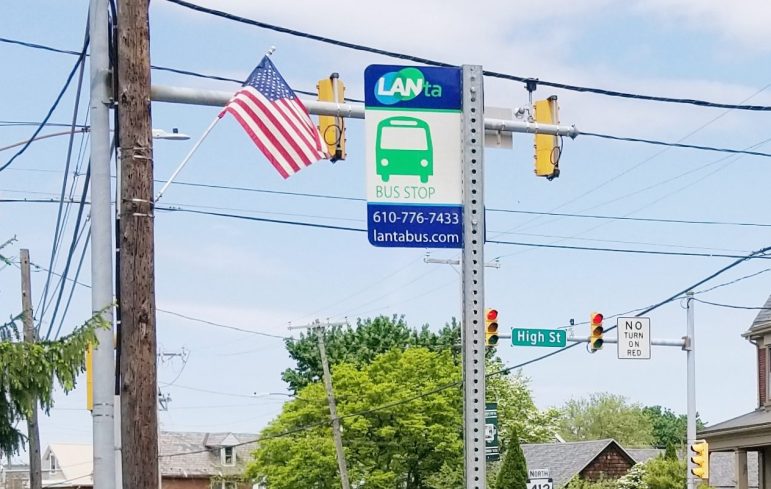 A LANTA bus stop near the intersection of Main and W. High streets in Hellertown borough. FILE PHOTO)

It will be harder for some Lehigh Valley residents who depend on the Lehigh & Northampton Transportation Authority’s (LANTA’s) bus service to get around the area Monday, after LANTA announced the cancellation of some Jan. 3 trips on its routes due to what it said is “a high level of absences among bus drivers due to COVID 19.”

“At this time the modifications are effective only for Monday,” a LANTA news release said. “Further decisions on any COVID-related service modifications will be made on a day-to-day basis.”

“We again regret having to make this decision and apologize for the inconvenience this causes our riders,” LANTA Executive Director Owen O’Neil said in a statement.

LANtaVan, LANTA’s door-to-door paratransit service for seniors and persons with disabilities, is also experiencing a driver shortage, the news release noted. However, it said all reserved trips on the LANtaVan system will be operated on Monday.

COVID cases fueled by the Omicron variant’s spread are currently at or near record levels in Northampton County, throughout Pennsylvania and around the country.

The high caseload has overwhelmed testing sites such as those operated by St. Luke’s University Health Network, with hospital officials last week asking residents who don’t match certain criteria to refrain from visiting those sites, due to long lines at the sites.

The health network also urged area school districts to keep mask mandates in place as students return from the Christmas break this week. However, some districts–including Southern Lehigh–are set to consider abandoning those mandates as early as next week.

A CDC requirement for masks to be worn on planes, buses, trains and other forms of transportation throughout the U.S. remains in effect. The order provides for some exceptions, such as when a passenger is actively eating or drinking, or “communicating for brief periods of time with a person who is hearing impaired when the ability to see the mouth is essential for communication.” Read more about the requirements at CDC.gov.

After mild temperatures prevailed for much of December the mercury Monday is forecast to plummet to levels slightly below normal, which may make walking places more difficult, particularly for area residents who are elderly or have health-related issues.

There is also a slight chance of snow later in the day on Monday, which will be followed by another opportunity for wintry weather on Thursday night and Friday, according to the latest National Weather Service forecast for the Allentown area.