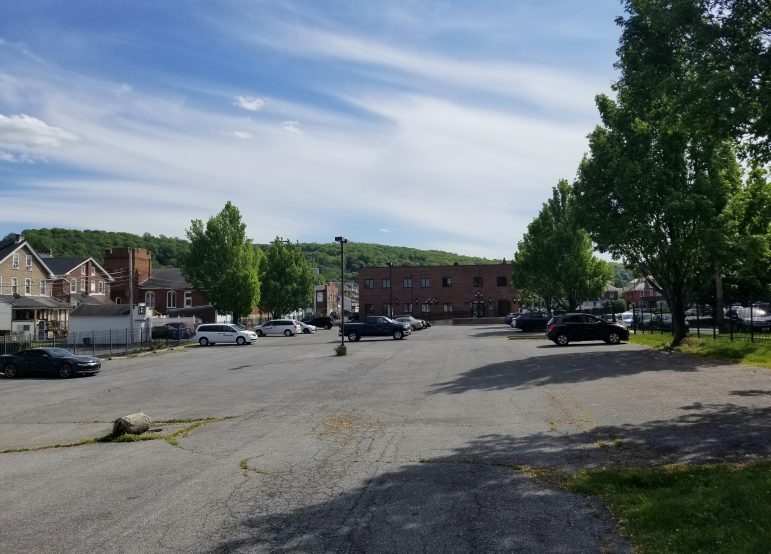 A developer’s proposal to construct an apartment building at Cherokee and Bishopthorpe streets in Fountain Hill hit a roadblock Tuesday when one of two variances that were being sought for the project was denied by the borough’s zoning hearing board. A parking lot and a 22-unit apartment building are currently located on the site.

A proposal for a 44-unit apartment building on Cherokee Street in Fountain Hill hit a roadblock when it came before the borough’s zoning hearing board Tuesday.

Developer Donny Petridis, who is an owner of 940 Cherokee LLC, told the zoning board he has owned the property for a little over three years and that the number of units was calculated based upon what would be economically feasible for its development.

Two variances were being sought to facilitate that development: one for the number of off-street parking spaces and one for the size of the dwelling units.

Under the borough’s zoning ordinance, two spaces are required for each unit, which means that a 44-unit apartment building would ordinarily need to have 88 spaces.

The plan presented to borough officials included 66 spaces or 1.5 spaces per unit, which Matthew Longenberger of Bohler Engineering testified is in line with “typical parking space counts per unit,” including zoning requirements in both Allentown and Bethlehem.

Bohler and attorney Joseph Piperato–who recused himself as the Fountain Hill Zoning Hearing Board solicitor to represent Petridis at the hearing–said the current two-story apartment building is home to a number of Temple/St. Luke’s med school students; a demographic they said the proposed apartment building would continue to house.

The other variance sought was for apartments that would be smaller in size than 3,000 square feet; a size requirement Longenberger said is not in line with the requirements of nearby municipalities. For example, he said in Wilson the minimum size of a comparable dwelling unit would be 1,000 square feet and in Emmaus it would be 1,200 to 1,500 feet.

He also cited other apartment buildings in the borough that do not meet the 3,000 square foot criterion, including the Lehigh County Housing Authority-owned Clarence Aungst Towers on Seneca Street, which sits on a parcel that is less than an acre in size.

The parcel at 940 Cherokee Street is approximately 1.2 acres in size, or less than half the acreage that would be needed for the 3,000 square feet-per-unit requirement to be met.

The 44 units proposed by the developer would each be 1,190 square feet on average, the zoning board was told.

During the hearing, the board also heard testimony from neighboring property owners, one of whom owns a business. 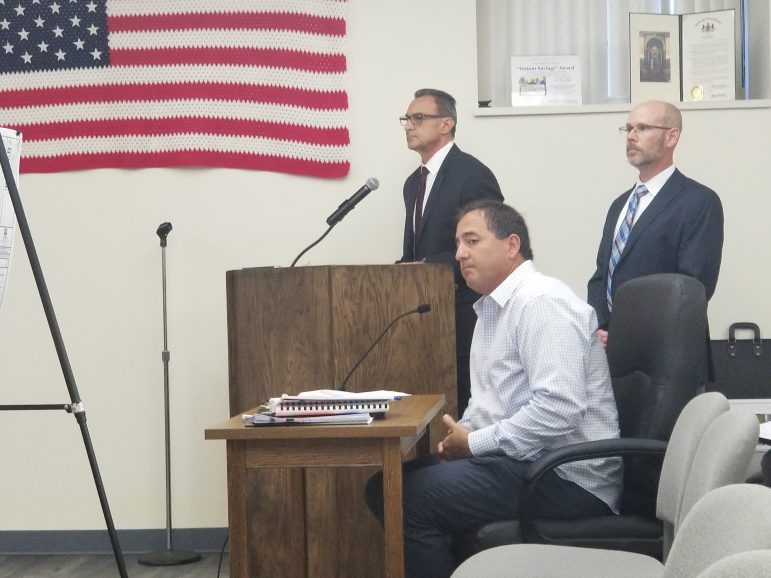 From left, attorney Joseph Piperato, developer Donny Petridis and engineer Matthew Longenberger attend a Fountain Hill zoning hearing board meeting Tuesday. At the meeting one of two variance requests Petridis’ company 940 Cherokee LLC was seeking for the construction of an apartment building at that address was denied. Piperato said that without the approval of both variances the project would likely not be economically viable.

Ellen Flynn said she and her husband own The Art Establishment at 945 Broadway, which is separated from the Cherokee Street property by Pawnee Street.

Flynn said parking has become a major issue in their block since they have owned The Art Establishment, which occupies a converted textile mill and has off-street parking.

“We are constantly having to ask people to move (their cars),” she said.

Piperato argued that the current lot at 940 Cherokee Street is underutilized and thus not a contributing factor to any on-street parking woes in the neighborhood.

Flynn, in response, said the conclusion that a new building with more tenants and fewer spaces would likewise not contribute to parking issues was “speculating.”

“It will not contribute to the parking issue here in the borough,” Piperato asserted.

Neighbor Kevin Molloy, who testified to having lived in the the 500 block of N. Bishopthorpe Street since 1985, also told the board that “parking in this neighborhood is a problem and it’s been a problem.”

Board member Christina Zelko Bennick said she believed that a 1 bedroom apartment of the size being proposed would likely house just one person, and along with board member David Kauffman voted in favor of approving the parking variance request. Board member Jeff Remling voted to deny the request.

Zelko Bennick also voted to approve the unit size variance, however it failed to pass when Kauffman and Remling voted against it.