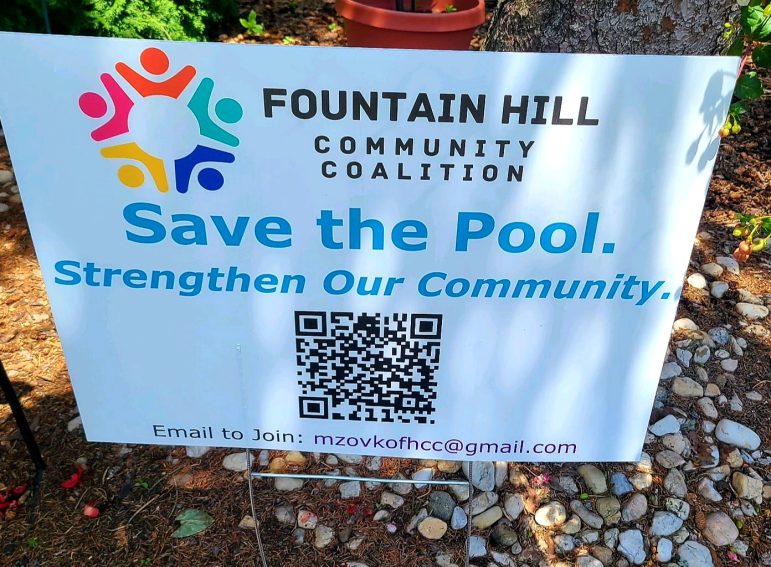 A grassroots committee formed to save the Fountain Hill borough swimming pool from permanent closure will hold its second meeting Saturday, July 9 from 10:30 a.m. to noon.

Mike Zovko, the resident who’s been leading the group, said in an email that the meeting will be held in the council meeting room at Fountain Hill Borough Hall, 941 Long Street.

Roughly 15 people attended the first Fountain Hill Community Coalition meeting in May, however membership seems to be growing, at least in part thanks to an active email list Zovko is administering. To be added to the list, email him at mzovkofhcc@gmail.com.

There is also now a Facebook page for the FHCC–which as of July 1 had approximately 150 followers–and the group has begun distributing yard signs to its members to help advertise itself and its mission within the borough.

The signs read: “Fountain Hill Community Coalition, Save the Pool, Strengthen Our Community,” and include a QR code that can be scanned for more information.

Per a PowerPoint presentation Zovko made at the May 12 FHCC meeting, the coalition’s immediate needs include assistance with writing grants to obtain funding for pool repairs; legal guidance, particularly for the establishment of a 501(c)3 nonprofit organization; web design and social media expertise; individuals with construction experience; and more volunteers.

In an outline of what was proposed for the group’s mission, Zovko suggested that the issues the borough is currently facing with regard to the pool are a symptom of a waning sense of community in Fountain Hill, which is home to approximately 5,000 people.

The borough has an undersized commercial tax base, and its largest landowner is St. Luke’s University Health Network, which as a nonprofit organization is tax-exempt.

Fountain Hill also has one of the highest tax rates in the Lehigh Valley, at 9.61 mills. The rate was a concern for some residents who spoke at a February forum and many who responded to a survey borough officials conducted last fall, in which they questioned whether the community would support higher tax bills in order to keep the pool open.

A majority of respondents said they wouldn’t support a tax increase, which precipitated a decision by Fountain Hill Borough Council in March to permanently close the pool.

Following that decision, Zovko and others collected signatures on a petition asking the council to rescind it, and members later voted to postpone a final decision until 2023.