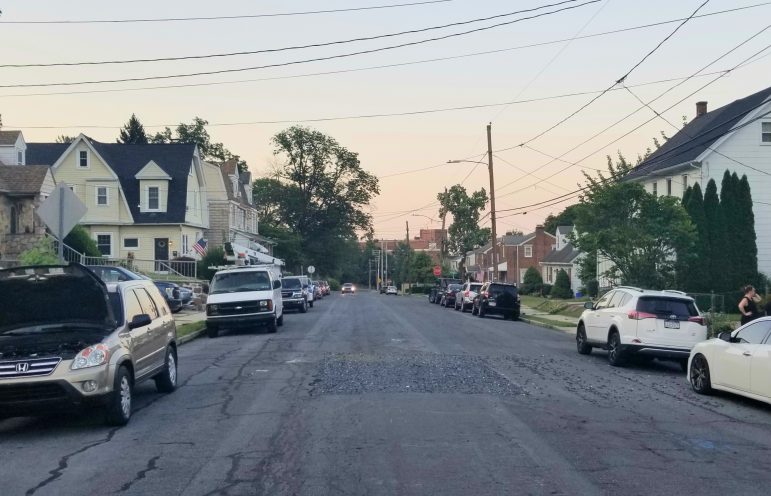 A one-block section of Jeter Avenue between N. Clewell Street and Kieffer Street in Fountain Hill borough, pictured above, will be rebuilt over a three to four-week period beginning July 25, borough officials announced Wednesday. The road will be completely closed to traffic at the start of the project, which received grant funding and will include sidewalk replacement.

For residents of a one-block section of Jeter Avenue in Fountain Hill borough, some short-term pain in the form of noise, dirt and disruption will bring long-term gain.

Residents who live along Jeter between Kieffer and N. Clewell streets will have to endure three to four weeks of road work starting Monday, but in return they’ll have a brand new road and new sidewalks to enjoy for years to come, borough officials said Wednesday.

Borough manager Eric Gratz updated Fountain Hill Borough Council members on the project, which he said received a green light after grant funding for it was secured.

Gratz noted that by Monday evening the 1000 block of Jeter Avenue will be “completely impassable” because the road’s surface will have been milled “down to (the) dirt.”

A subcontractor for Kobalt Construction–which was recently awarded the bid for the road reconstruction project–will complete the milling, he said.

Gratz said the block of Jeter that is being reconstructed will be closed to traffic on a 24/7 basis at least until a new road base is put down. Police and fire crews will still be able to respond to emergencies, and modified trash pickup will in place for residents, he added.

According to Gratz, in addition to homeowners in the affected block, officials with nearby St. Luke’s Hospital were also notified of the impending road closure this week.