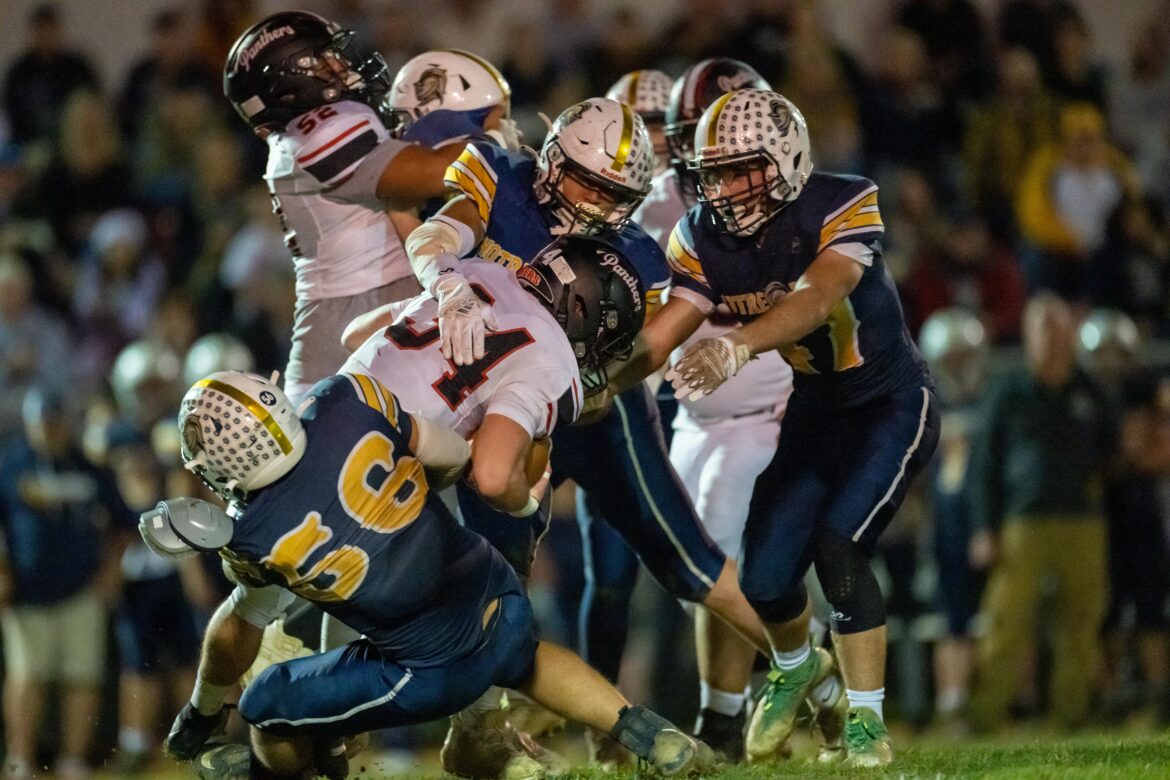 Ty Pfizenmayer (34) and the Panthers tried to pound the Crusaders early in the 2022 District XI quarterfinal.

On Friday night the Saucon Valley Panthers made their way to Bethlehem Township for a rematch with the Notre Dame Crusaders in the opening round of the PIAA District XI 3A Playoffs.  Week #1 Notre Dame was able to hold off Saucon Valley 41-34. This time the stakes were much higher with the District XI title and a possible state championship berth on the line.

Saucon won the coin-toss an opted to take the ball to start the game.  However, the Panthers were quickly forced to punt after only three plays and gave the ball up to Notre Dame near midfield.  Crusader running back Dainn Vassallo powered his way behind the right side of his line for fifteen yards on first-down.  The following play quarterback Danny Darno faked to Vassallo and kept on a quarterback-counter for a 33-yard touchdown run.  Felipe Lacerda’s extra-point kick was good and less than three minutes into the game Notre Dame led 7-0. 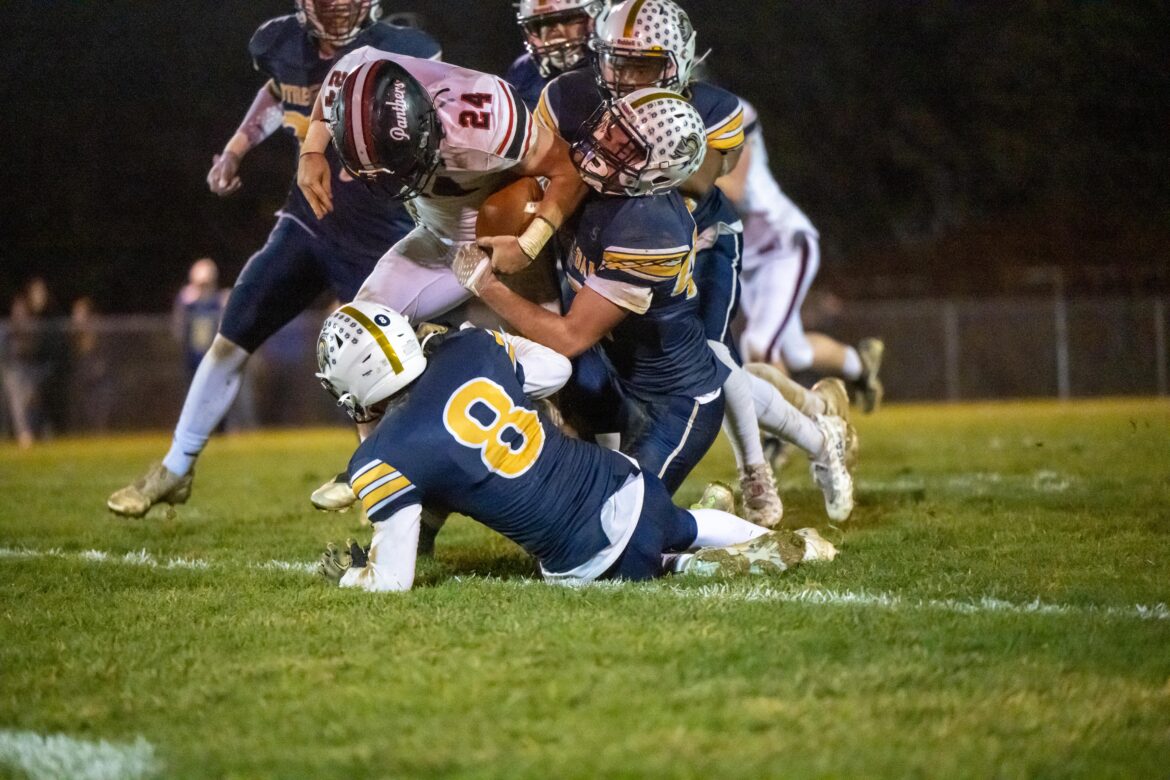 There wasn’t a whole lot of room for running back Landon Beckoswki (24) and Saucon Valley against the Notre Dame Crusaders.

The Panthers went three-and-out on their second series.  Notre Dame took advantage of a short punt to start their second drive from the Panther 48-yardline.  Five plays later Darno ran for his second touchdown of the night.  Lacerda’s PAT hit its mark and with five minutes to go in the opening quarter the Crusaders improved to a 14-0 lead.

It went from bad to worse when Saucon was once again forced to go three-and-out.  Notre Dame capitalized on their defensive stand with a seven play, 46-yard drive for points.  This time it was running back Josh Ludlow who took a 1-yard plunge up the gut for a touchdown.  With two minutes still remaining in the first quarter Notre Dame led 21-0.

It went from really bad to even worse for the Panthers during their next series.  On 1st & 10 from their own 25-yardline Saucon fumbled the snap away to the Crusaders.  Two plays later Notre Dame’s Ludlow swept the right end of the Panther defense for a 19-yard touchdown run.  Ludlow’s score and Lacerda’s point-after gave ND a 28-0 lead with 1:13 still on the first quarter clock. 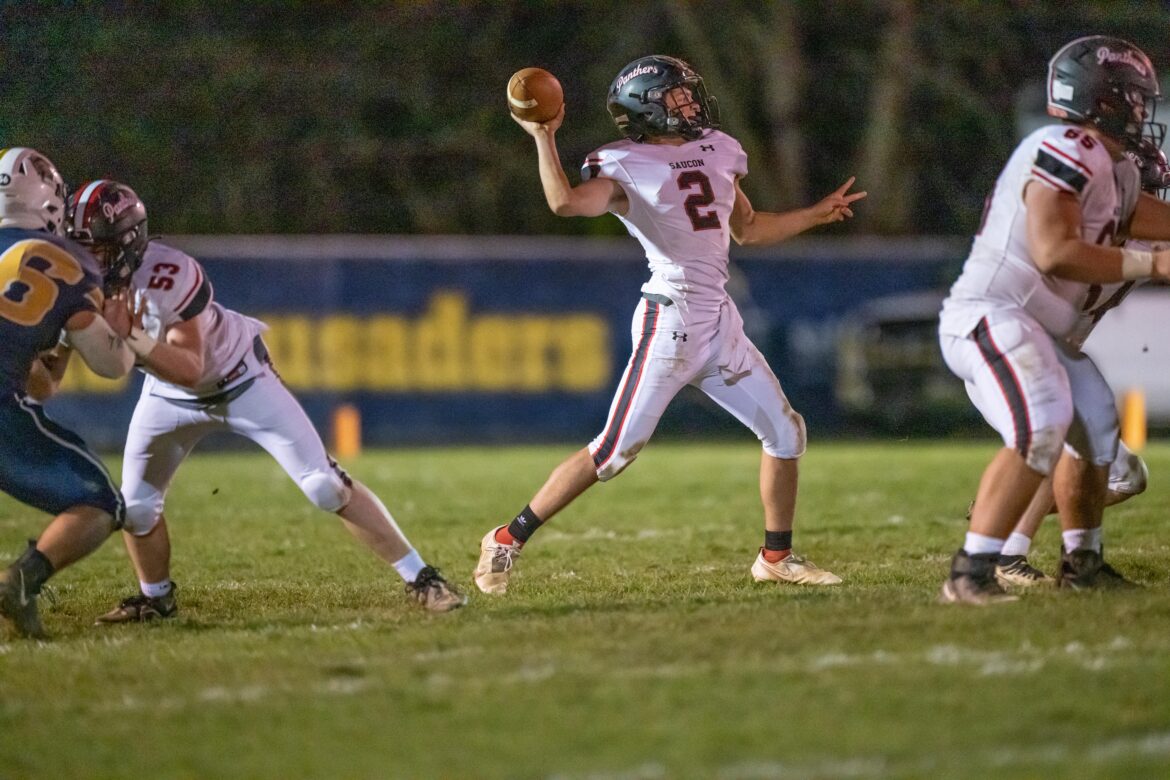 Saucon Valley received a spark when Saucon junior Landon Beckowski returned Notre Dame’s kickoff out to the midfield stripe.  Two plays later Panther quarterback hit sophomore receive Jack Robertson for a 38-yard gain down to the Crusader 2-yardline.  On the following play Beckowski took a handoff up the middle for a score.  Brayden Schriffert connected on the PAT and the Panthers got on the scoreboard but trailed 28-7. 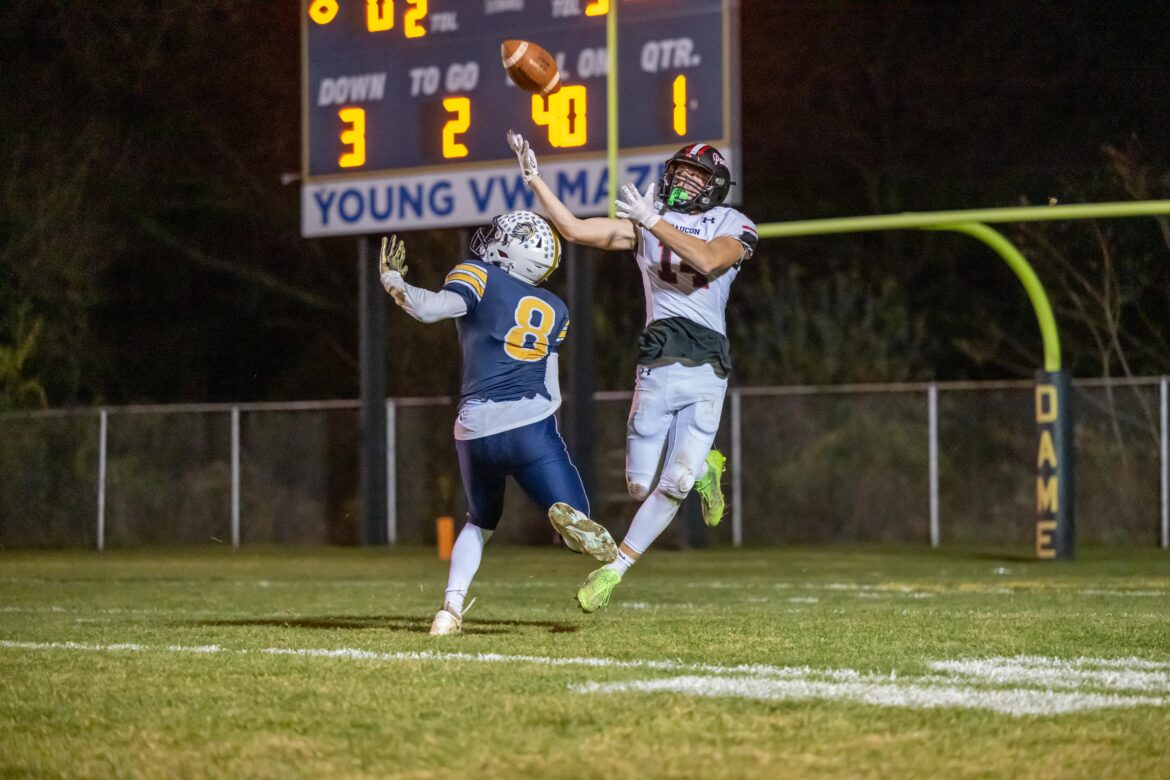 It didn’t take long for the Crusaders to answer.  Highlighted by a 48-yard keeper up the middle by Danny Darno, Notre Dame quickly staked a claim to a 35-7 lead after Darno hit wide receiver A.J. Lozano on a slant route for an 11-yard touchdown pass.

On their next possession the Panthers manufactured a lengthy drive that made its way all the way to the Crusader 9-yardline.  However, Saucon could not convert on 4th & 8 and turned the ball over to Notre Dame on downs to close out the first half of play.

After a short kickoff to get the second-half going, Notre Dame started the second half near midfield.  Six plays later the Crusaders were in the Panther end zone.  This time Lozano made good on a 15-yard slant from Darno.  Lacerda remained perfect with his PAT’s and with 10:19 left in the third quarter Notre Dame triggered the mercy-rule clock with a 42-7 lead. 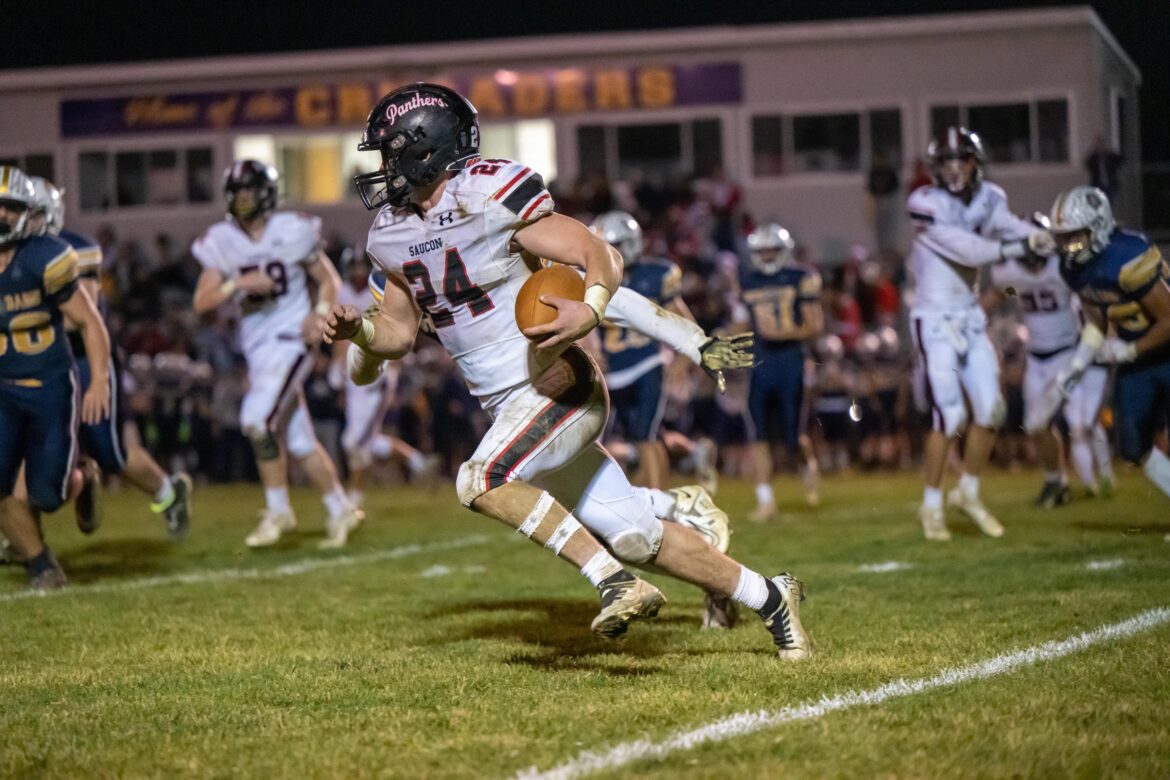 Landon Beckowski (24) races for points against the Notre Dame Crusaders.

To Saucon’s credit, they continued play hard.  And, their efforts paid off.  Starting from their own 35-yardline the Panthers chunked their way down the field.  Beckowski popped the Crusader defense and raced for a 35-yard run on 1st & 10.  Pfizenmayer hammered for eleven yards.  Beckoswki juked for ten more.  Riefenstahl hit Robertson over the middle to pick up another 14-yards.  Jared Rohn found some room that was good for ten yards as he took a handoff around the left end.  Then, the Panthers cashed in on Landon Beckoswki’s 35-yard run up the middle when he popped the interior of the Crusader defense.  Schriffert did his thing and the Panthers made the whoopin’ they were getting feel just a little bit better with another score.  Notre Dame did add another touchdown on a late 43-yard touchdown pass from Darno to Lozano to make the final score 49-14.

Notre Dame will advance to play Northwestern Lehigh in the District XI semifinals.  The Panther season comes to an end. 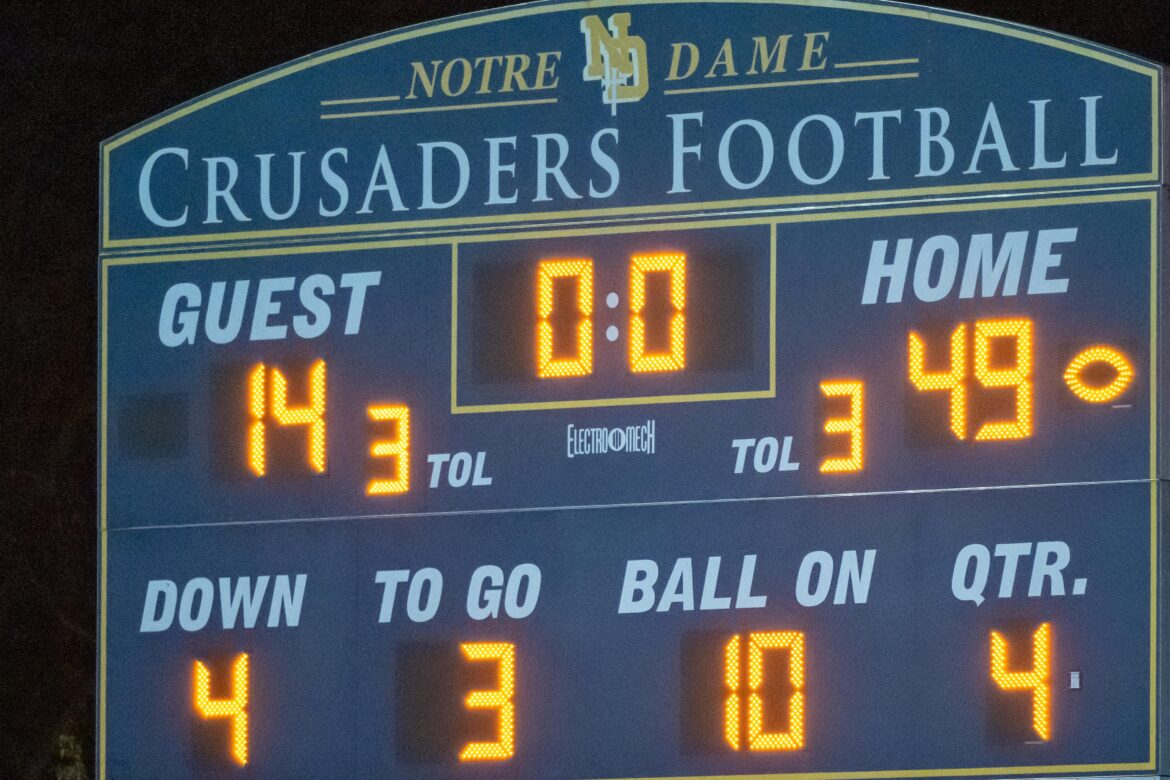 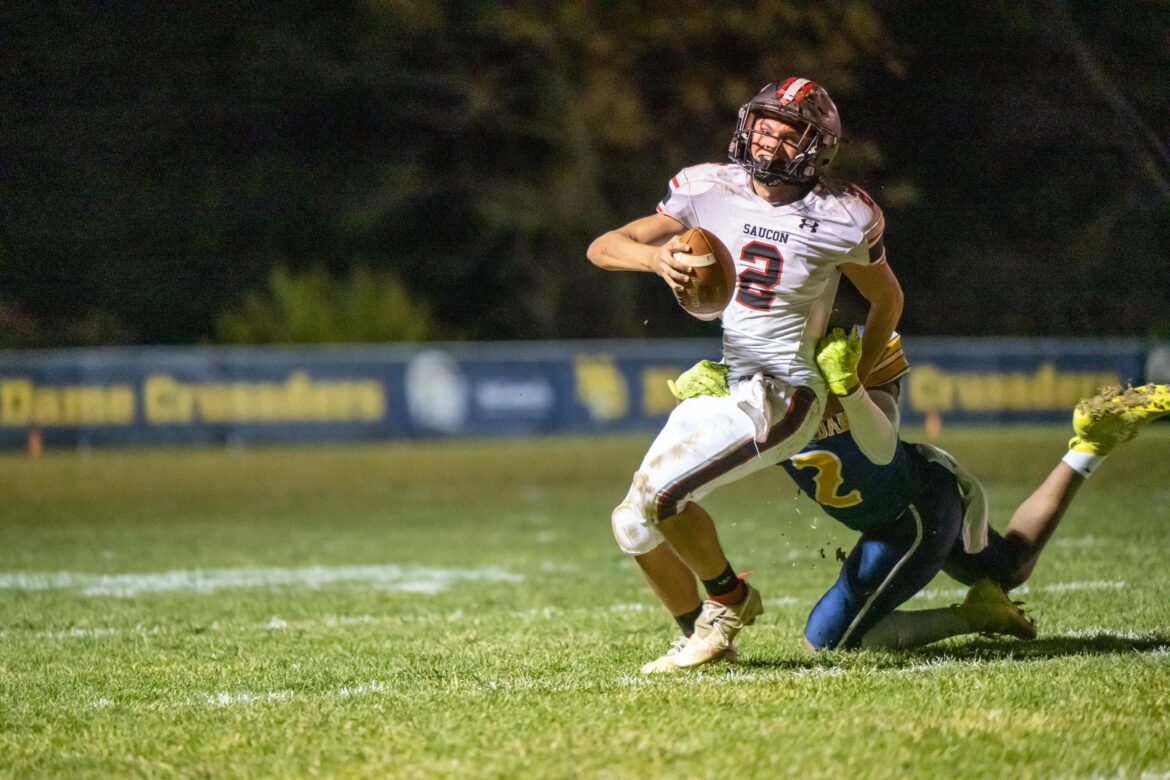 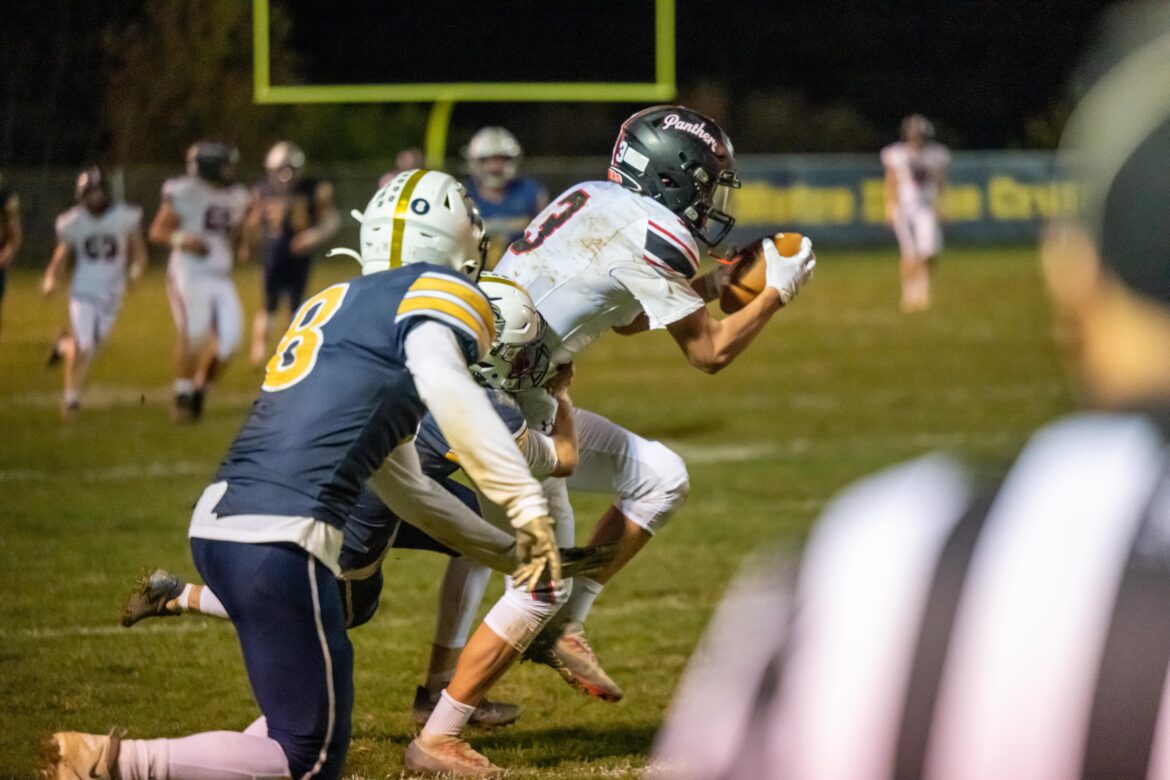 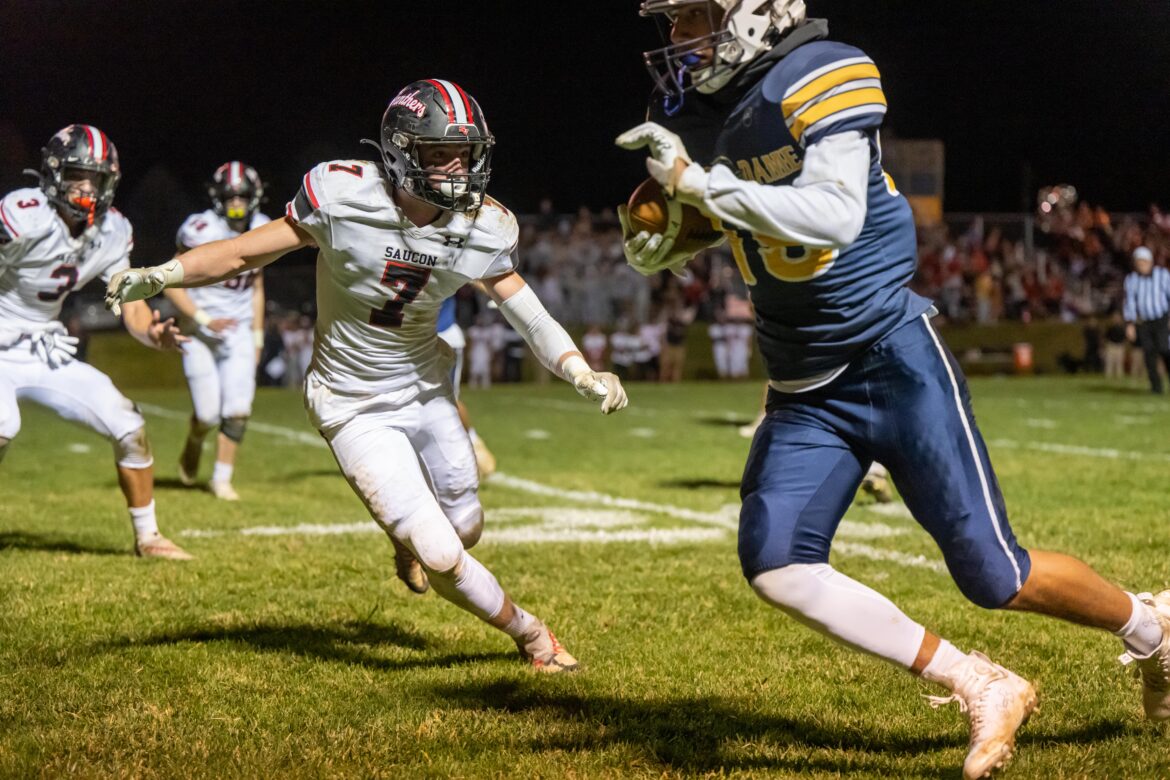 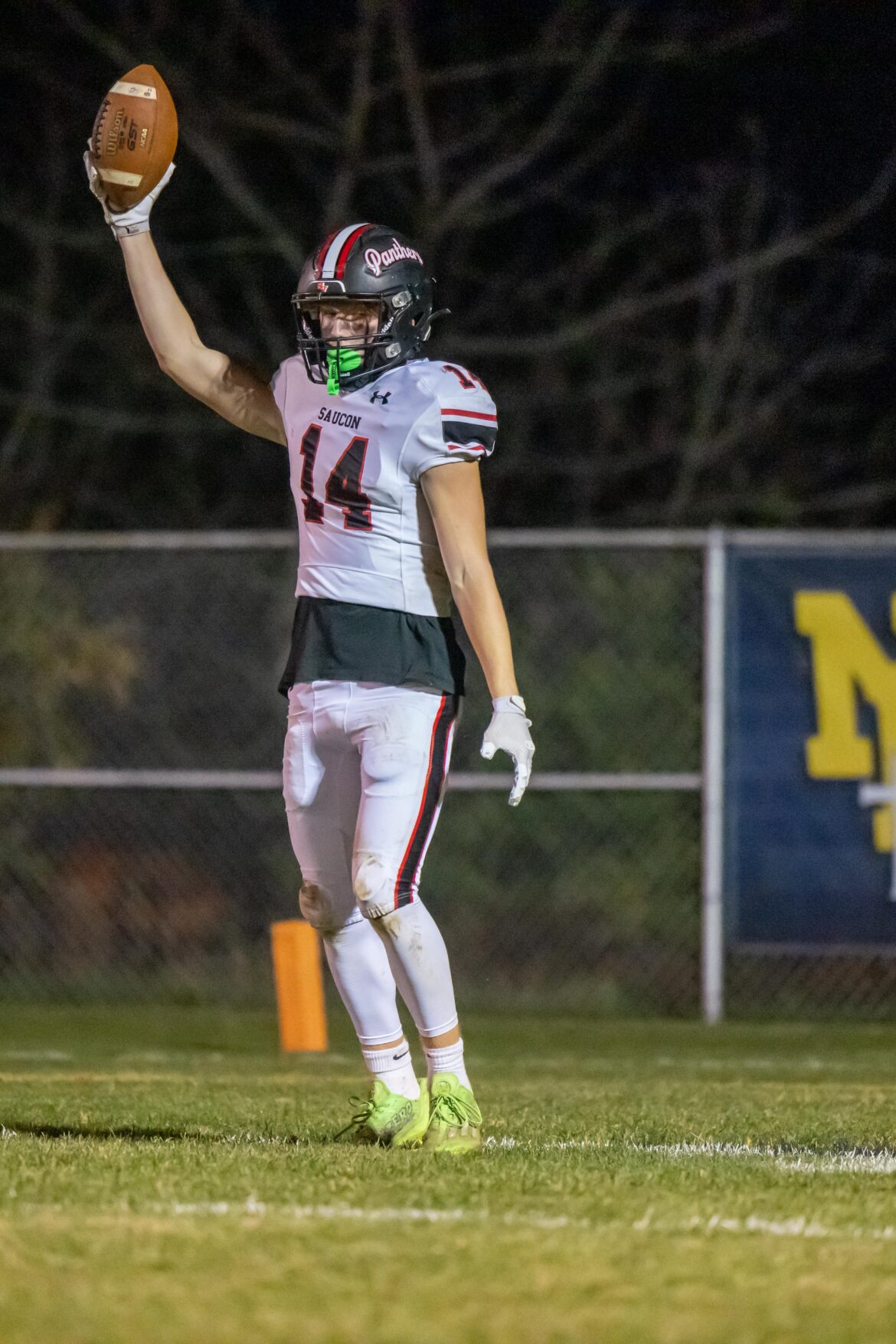 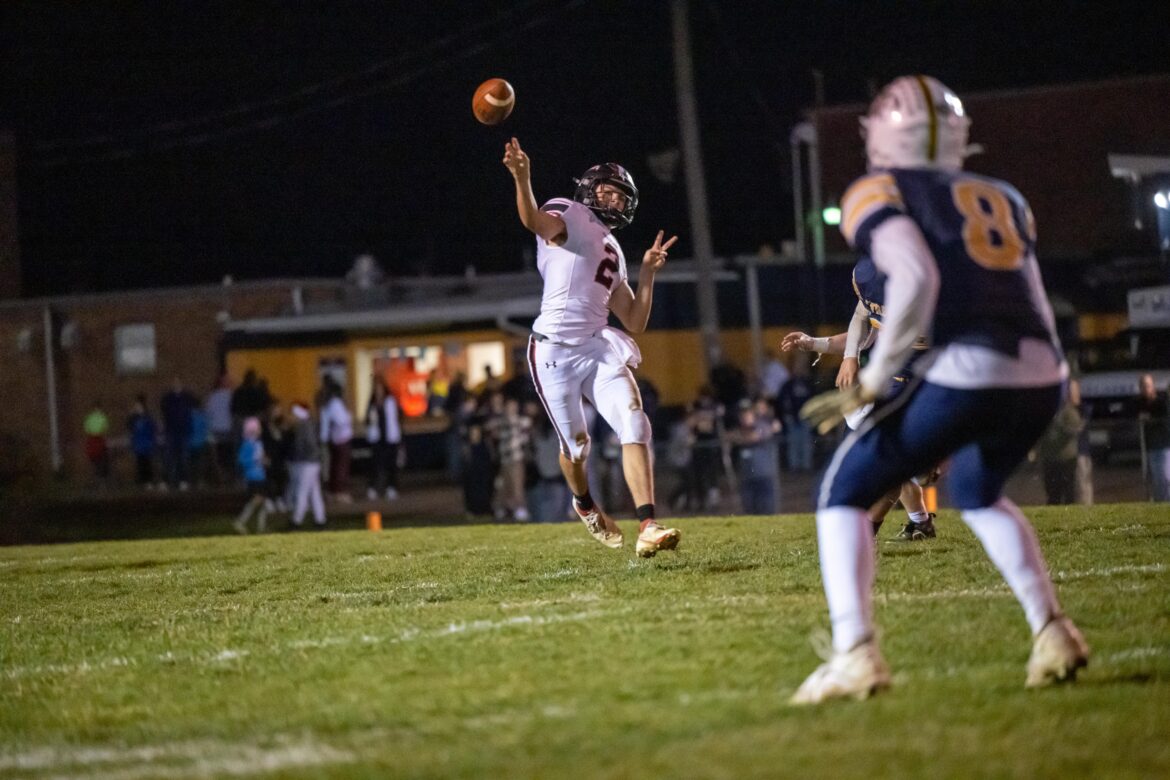 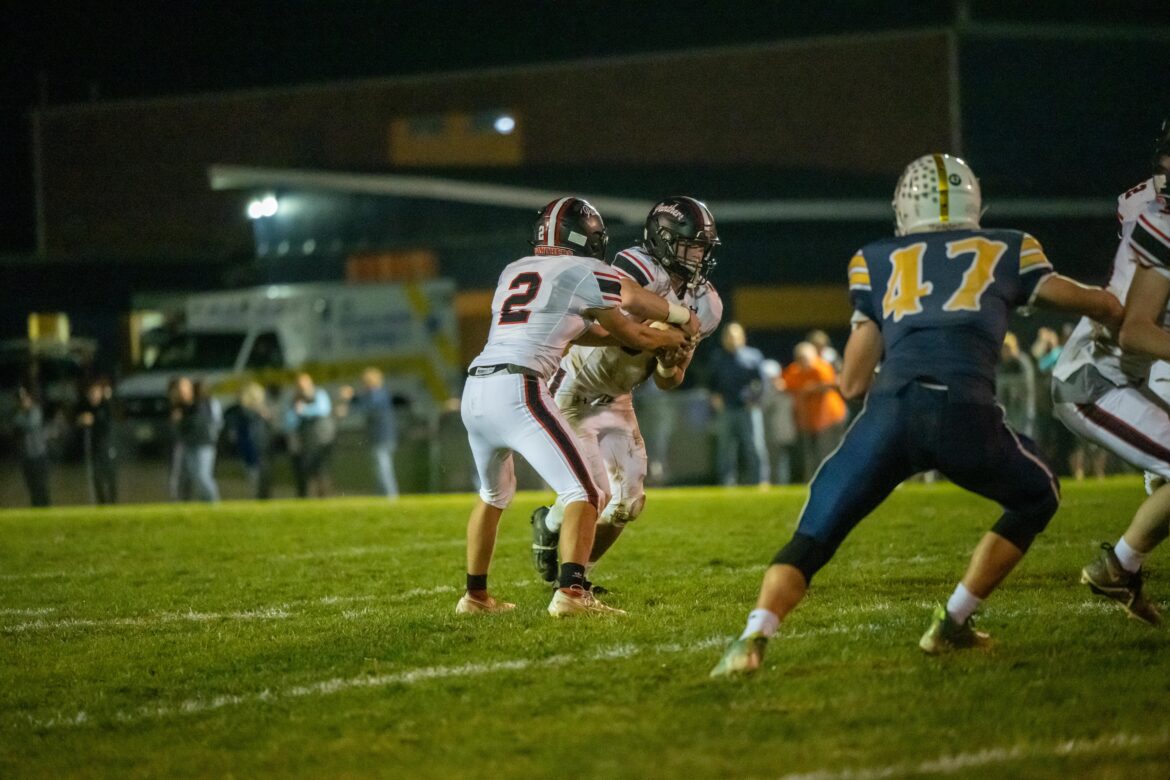 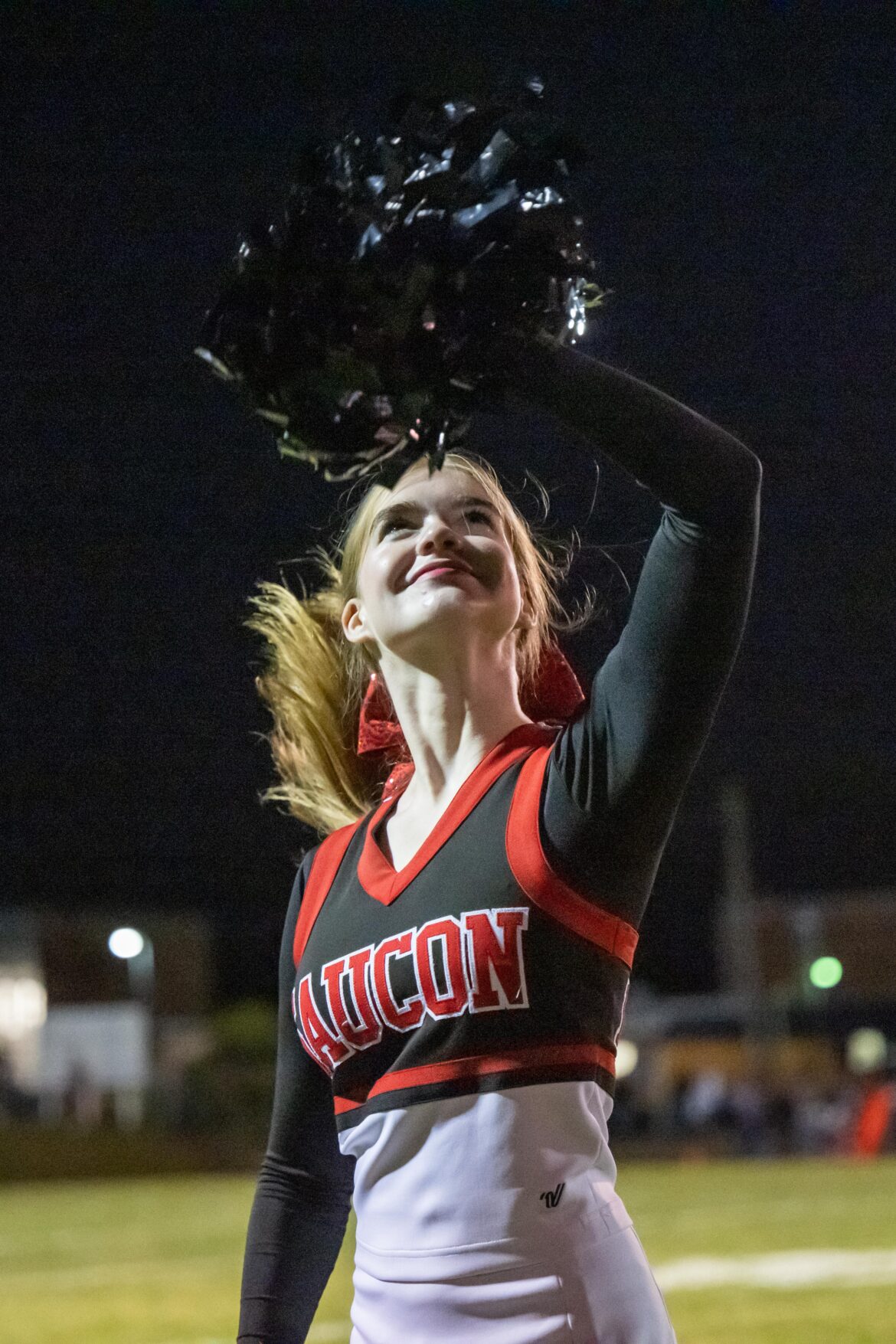 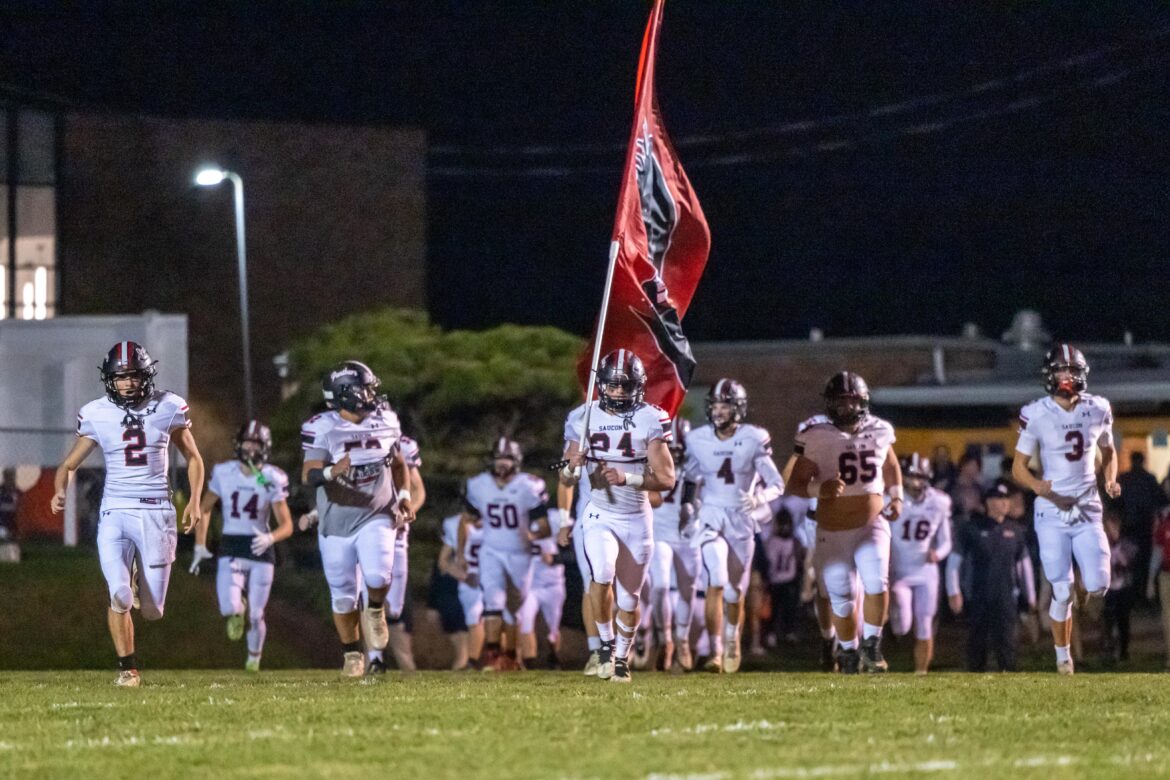 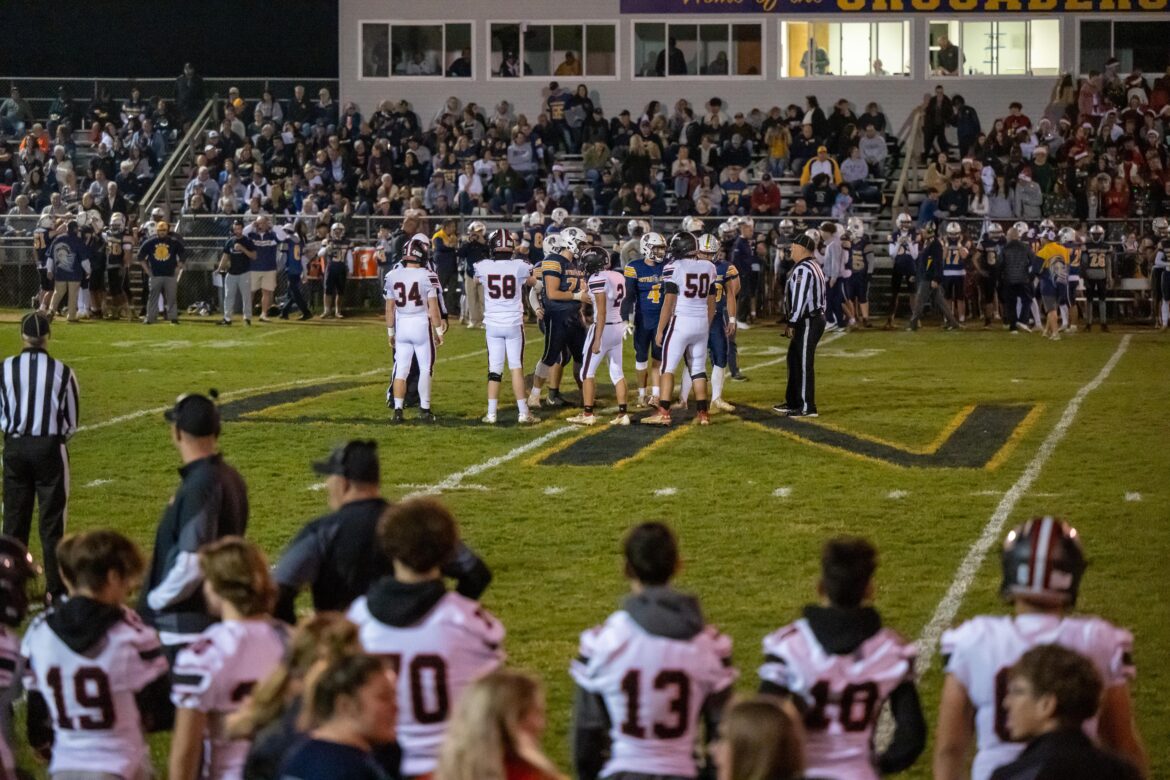 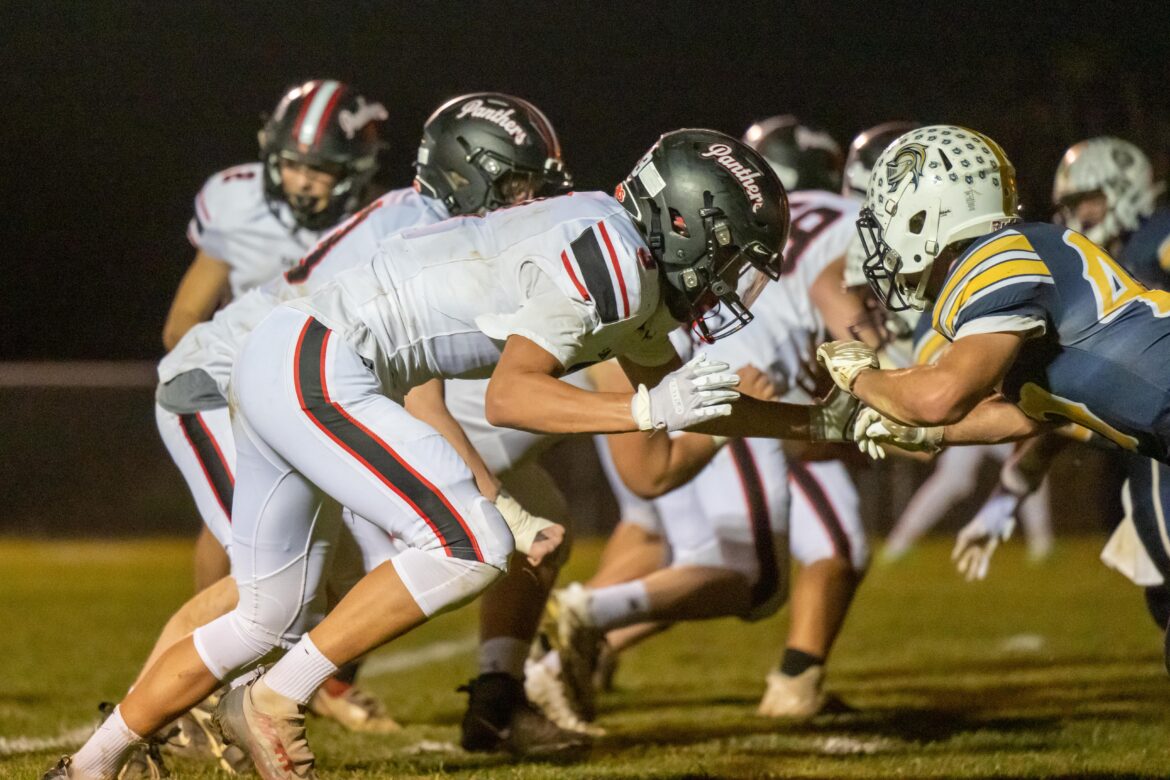 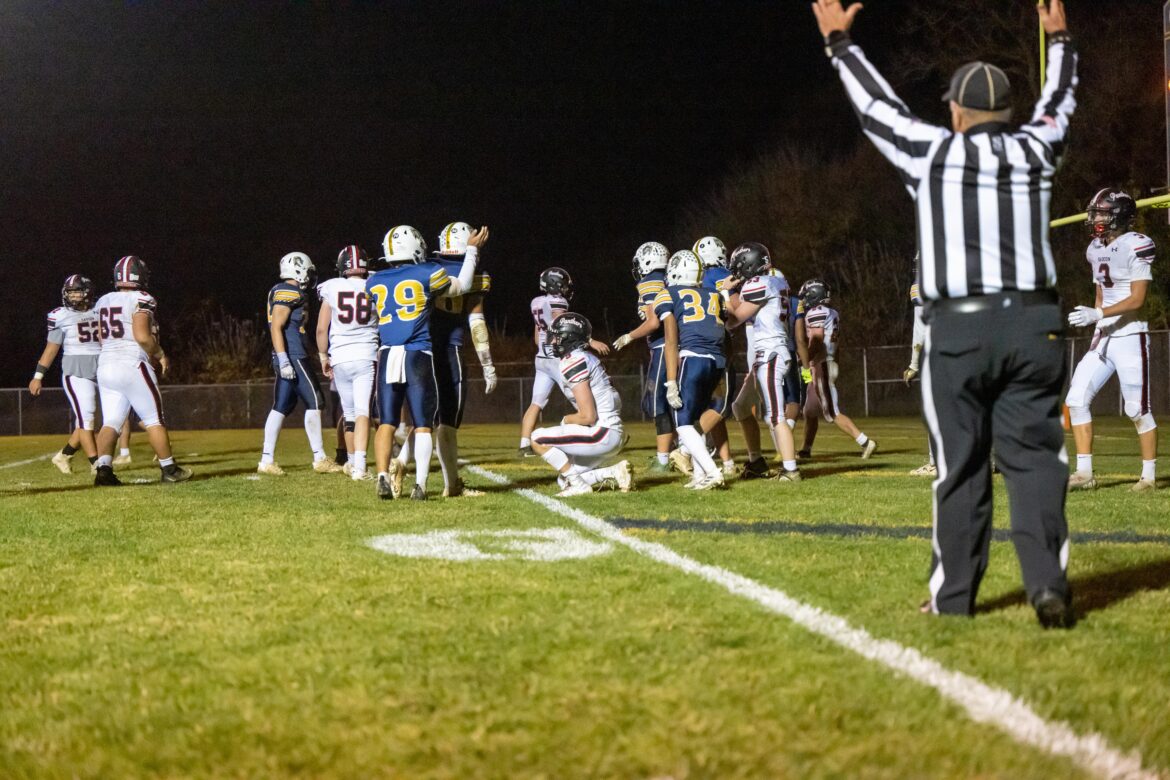 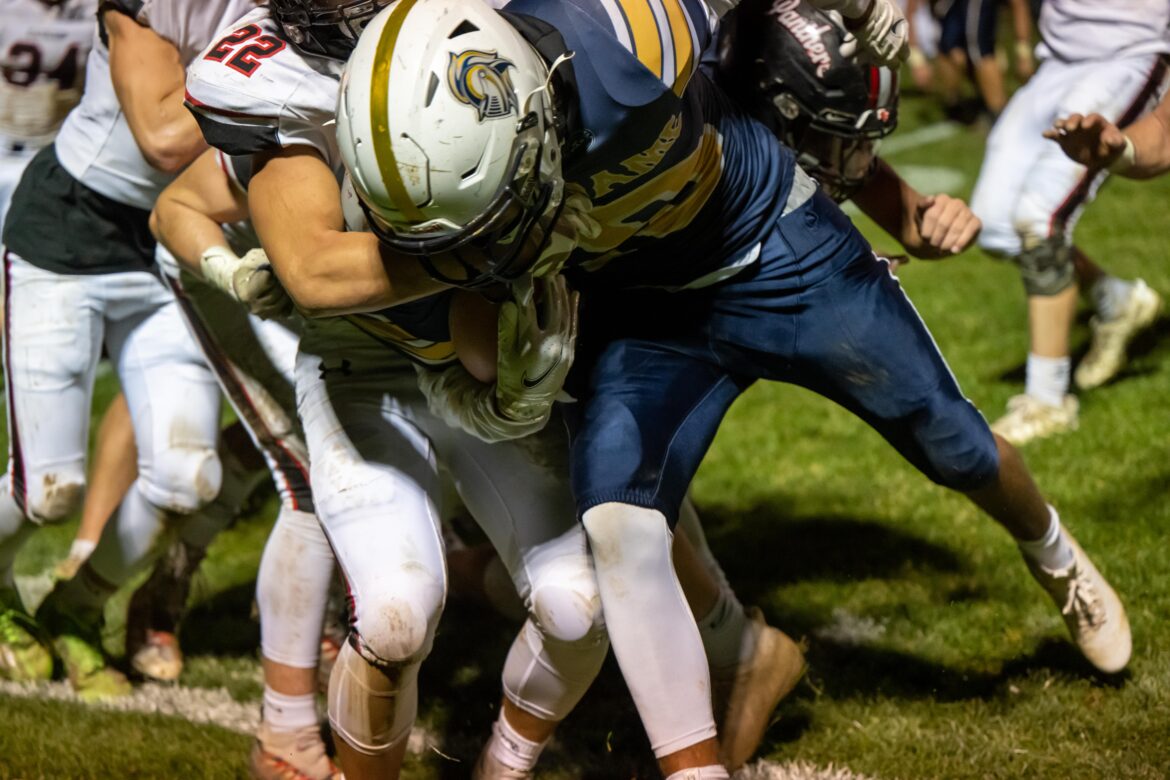 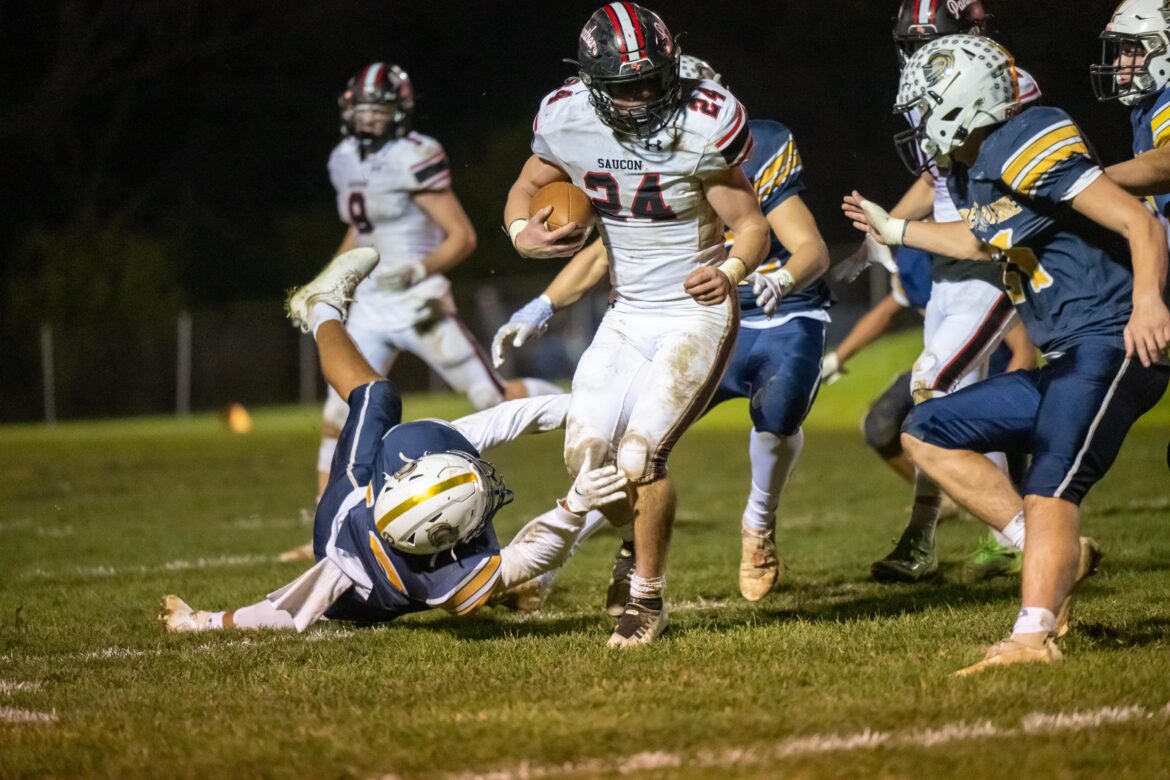 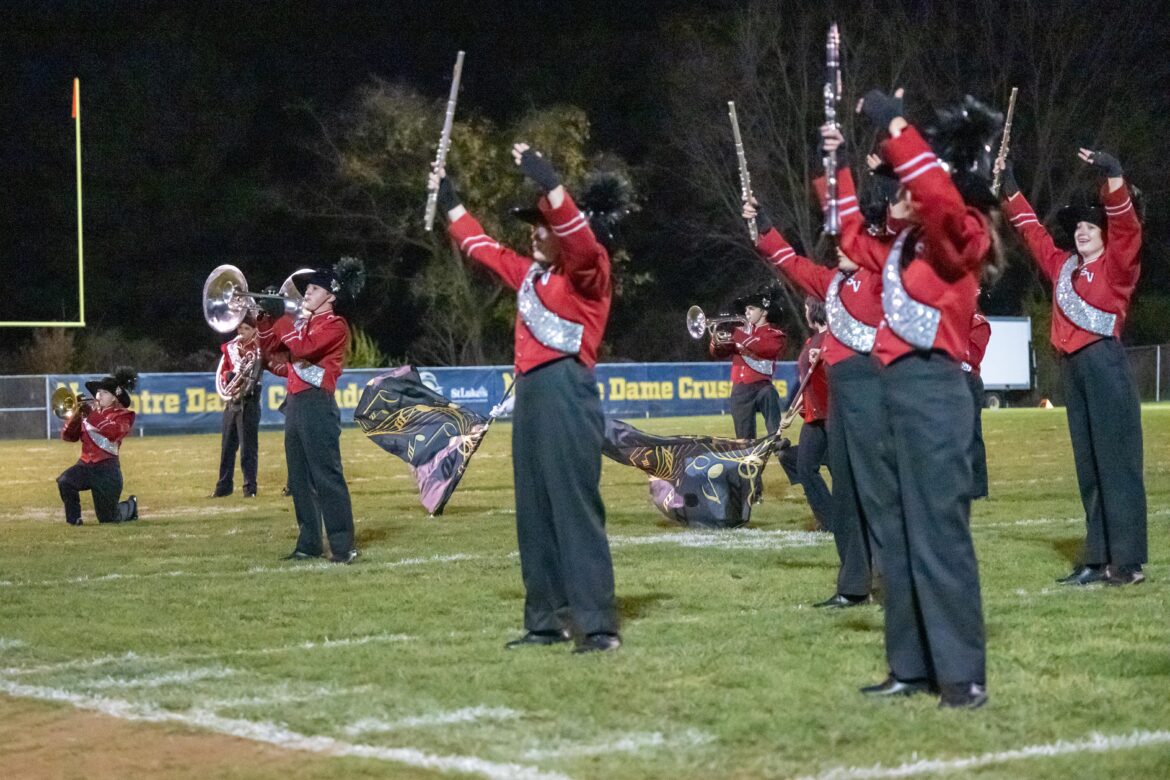 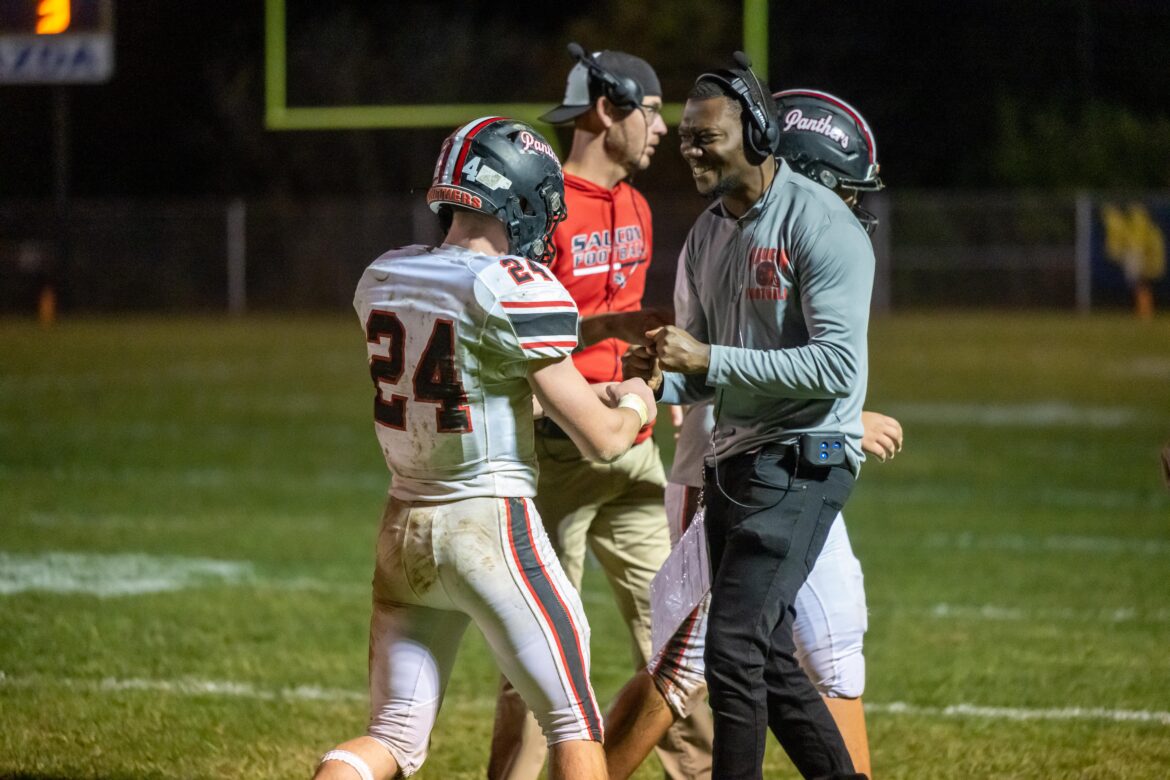