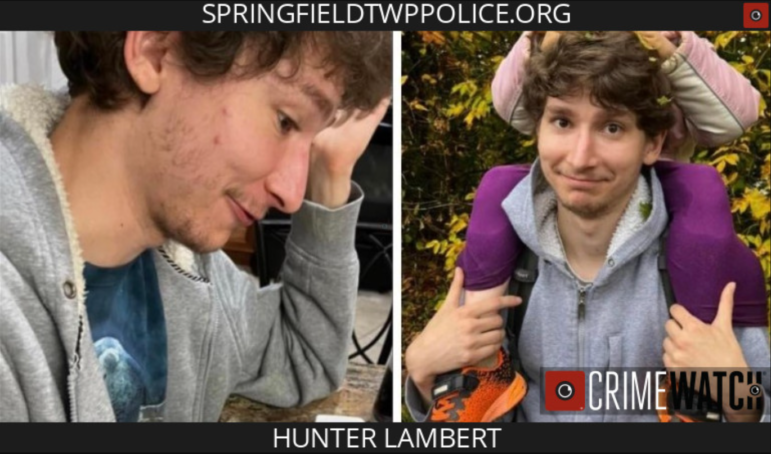 UPDATE (Thursday, Nov. 17, 1:10 p.m.): The Springfield Township Police Department announced Thursday on Crimewatch that Hunter Lambert “has been located and is safe.” Police thanked the community for assisting in the search for Lambert.

A man who has been classified as missing/endangered is the subject of a search involving the Springfield Township Police Department.

In a post on the department’s Crimewatch site Wednesday morning, police asked for help in their search for 24-year-old Hunter Lambert, who they said was last seen “walking from the Pennsylvania State Police Skippack barracks,” which are located at 2047 Bridge Road in Schwenksville, Montgomery County.

According to the post, Lambert was last seen in the area of 2071 Cressman Road, which is about half a mile from the barracks.

The news release did not say when Lambert was last seen or whether he is a resident of Springfield Township, which is approximately 25 miles from Schwenksville, however public records list a Kintnersville address for him.

Police said Lambert “may be suffering from mental health issues.”

They said he has been entered into the National Crime Information Center (NCIC) database as a missing/endangered person.

Police shared two photos of Lamber, who they described as a white male, approximately 6 feet tall with a slim build and thick, curly brown hair.

Anyone who hears from or sees Hunter, or who has information about his whereabouts is being asked to contact the Springfield Township Police Department immediately at 215-328-8523.

Tips can also be submitted to the department via their Crimewatch site.