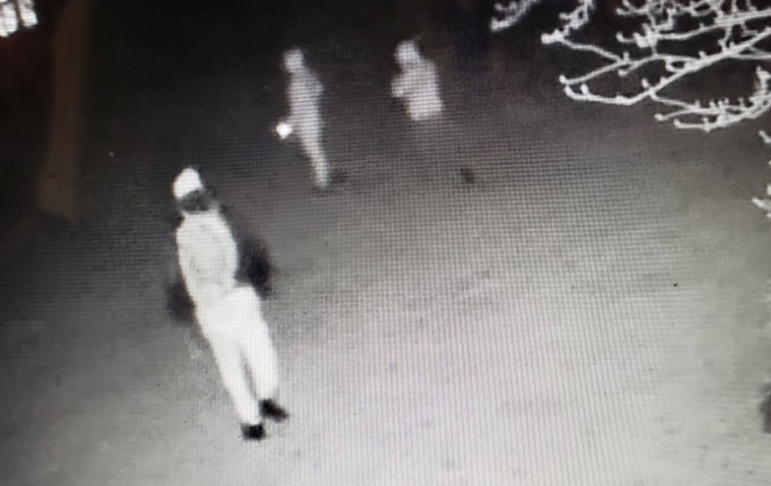 Three people were seen on surveillance footage outside a home in the 1600 block of Wildberry Road in Lower Saucon Township Sunday. Police shared two images of the unidentified individuals in a Crimewatch post in which they said that the suspicious activity occurred about a mile from where another home was recently burgled at approximately the same time of day. (Credit: Crimewatch/Lower Saucon Township Police Department)

Lower Saucon Township Police Tuesday shared information about a suspicious incident that took place in a residential neighborhood over the weekend, and said the activity may not be an isolated incident.

In a post on the department’s Crimewatch site, police said they responded to a home in the 1600 block of Wildberry Road Sunday after several people were observed trespassing on the property.

Police shared surveillance images they were provided by the homeowner in the post.

Police said the home is located about a mile from where a burglary occurred in the 1700 block of Hawthorne Road just last week, and noted that the suspicious activity occurred at approximately the same time of day as the Nov. 16 burglary.

Although police said it is unclear if the two incidents are related, they urged residents to be vigilant about securing all of their home’s exterior doors and windows.

Additionally, police recommended that any residents who will be away from home alert them to that fact before they leave.

Suspicious activity that is observed should be reported immediately to the police by calling 610-759-2200.

Anyone with information regarding the suspicious activity on Wildberry Road is being asked to submit a tip to Lower Saucon Police via their Crimewatch Tipline or to contact Detective Corporal Eric Marth at 610-625-8722 or emarth@lowersaucontownship.org.