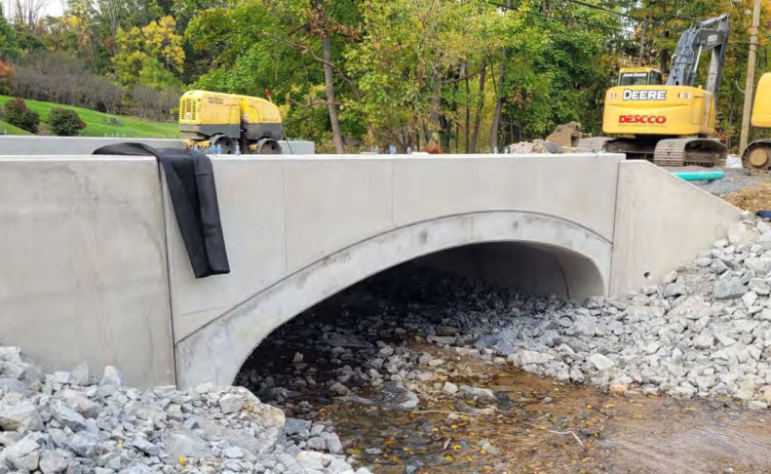 A small bridge that was closed nearly three years ago due to structural deficiency has reopened following the installation of a new span, township officials said Wednesday.

Just in time to help speed up local residents’ Thanksgiving travels, the Lower Saucon Road bridge near Alpine Drive opened on schedule, as officials had said earlier this fall that they hoped to reopen it in November.

The final step in reopening the bridge was the installation of new guide rails adjacent to it; work that was just completed, they added.

With the bridge now open to traffic again, detour signs for Apple Street and Alpine Drive will be removed shortly after the holiday, Wednesday’s announcement indicated.

Whenever the subject of closed bridges in Lower Saucon Township is discussed, the former Meadows Road Bridge near Rt. 412 south of Hellertown borough is frequently a topic of conversation.

Unlike the Lower Saucon Road bridge, the Meadows Road Bridge is under Northampton County jurisdiction.

The former stone bridge was dismantled earlier this year, approximately four years after it was closed to traffic and a year-and-a-half after it was added on the National Register of Historic Places.

Judged to be beyond repair after parts of the span crumbled into the Saucon Creek in 2021, the Meadows Road Bridge had carried traffic across the stream since 1856.

Engineering and environmental studies which are required for the construction of a new span are expected to take several years to complete, meaning that work on the replacement structure for the Meadows Road Bridge is unlikely to begin before 2025.