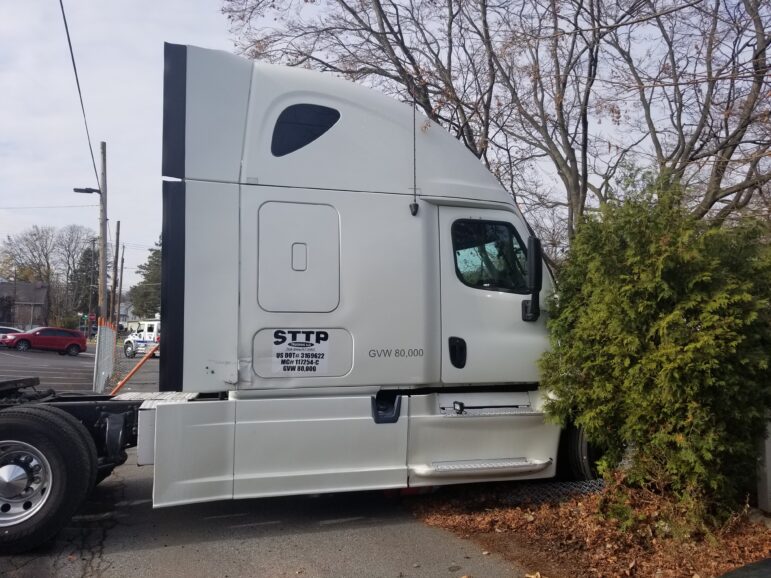 A tractor-trailer cab that careened out of a church parking lot crashed into a yard in the 1100 block of Seneca Street in Foujntain Hill Tuesday. Police and fire officials were on the scene to investigate what happened and remove the damaged rig, which came to a stop blocking access to an alley that runs behind the 1100 blocks of Seneca Street and Broadway.

A tractor-trailer cab whose driver may have lost control of it ended up wedged inside the yard of a home in Fountain Hill borough Tuesday morning.

As of 11 a.m. borough police and the Fountain Hill Fire Department were on the scene of the accident, which occurred along an alley just behind the 1100 block of Seneca Street.

The front end of the cab was embedded at least several feet into shrubbery that surrounds the yard and a small Cape Code-style home, which wasn’t struck by the truck.

Prior to the crash, the vehicle was in the parking lot of a church in the 1100 block of Broadway when control of it was apparently lost and it careened through a chain link fence, coming to a stop after it impacted the shrubbery.

The alley, Beech Street, was temporarily closed to traffic near N. Bergen and Seneca streets due to the crash.

A nearby resident said he was alerted to the accident by the odor of burning rubber.

The truck’s tires appeared to have sustained damaged during an attempt to bring the vehicle to a stop, and some of the macadam underneath it showed signs of damage.

There were no reports of injuries.

The cause of the crash was not immediately clear, and as of 11 a.m. authorities appeared to be awaiting the arrival of a large tow truck capable of removing the damaged truck cab. 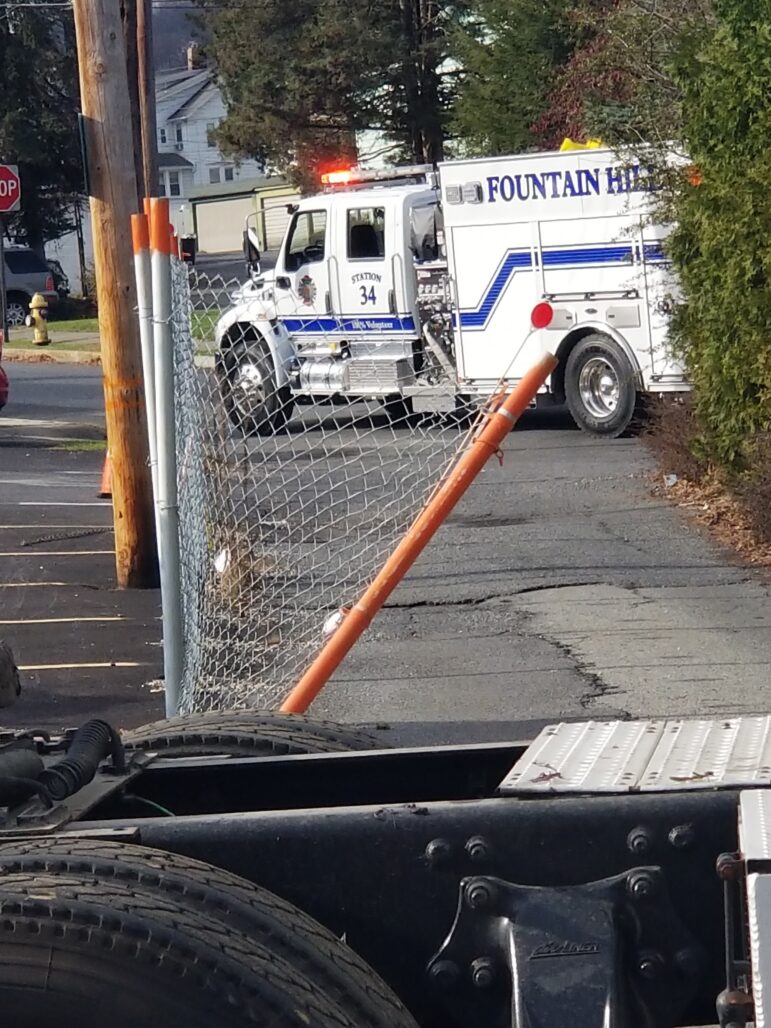 A section of chain link fence that surrounds the parking lot the truck was exiting was damaged when it crashed through it. 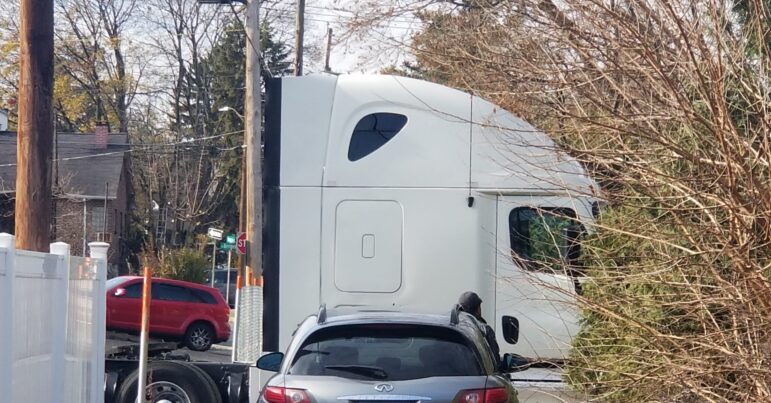 Access to the alley–Beech Street–near Seneca and N. Bergen streets in Fountain Hill was blocked due to the crash. 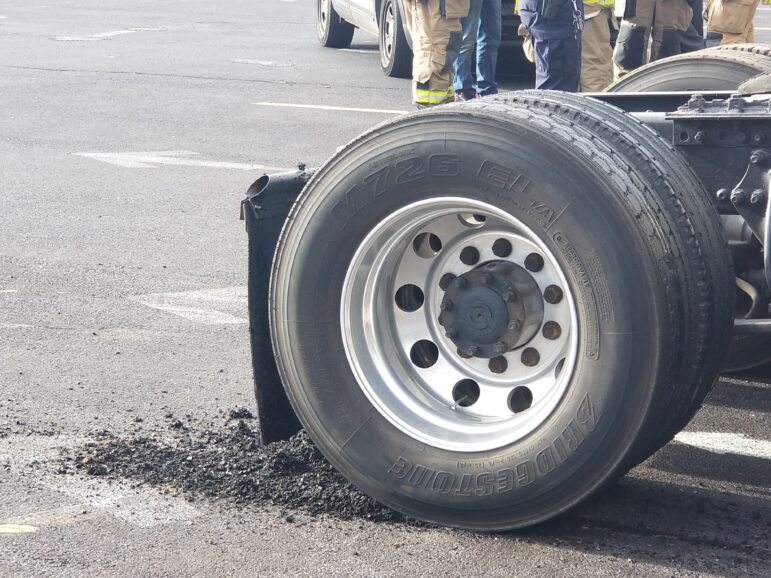 The driver of the vehicle apparently “burned rubber” in an attempt to bring it to a stop before it crashed through the fence and into a yard on the opposite side of the alley next to the parking lot. A nearby neighbor said the odor drew his attention. 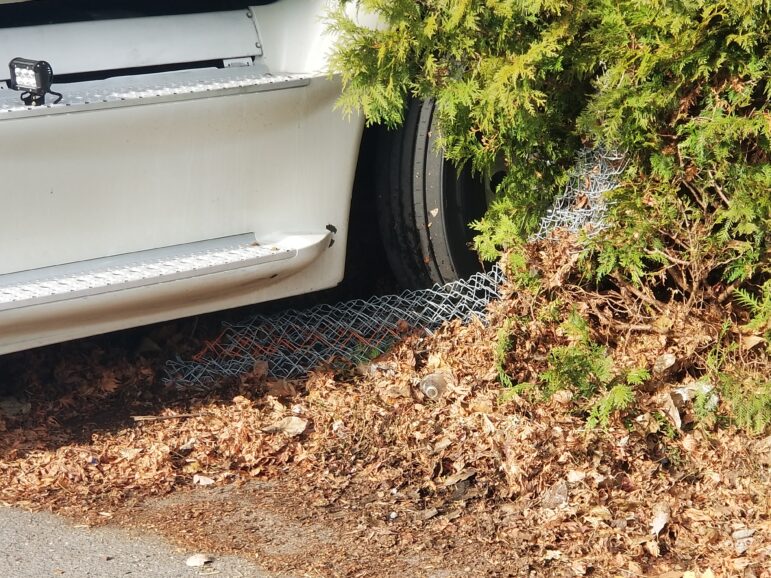 The front end of the tractor-trailer cab came to a stop inside the yard of a home in the 1100 block of Seneca Street in Fountain Hill, having dragged a section of the chain link fence with it. 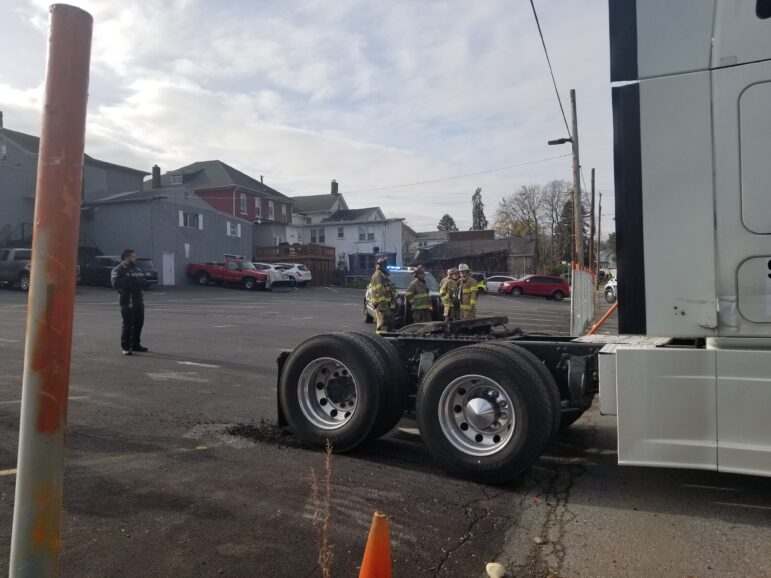 At around 11 a.m., police and fire officials were on the scene of the accident, in a parking lot behind a church in the 1100 block of Broadway in Fountain Hill.