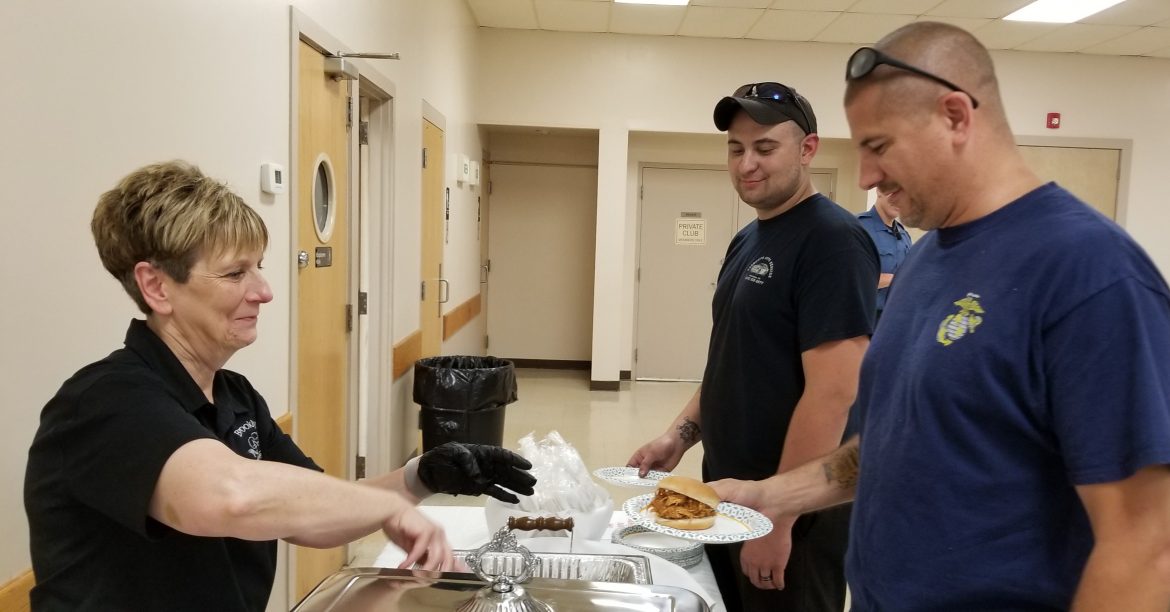 Bobbie Gianguzzi of Brooklyn's Catering at the Springtown Inn serves barbecue sandwiches to Dewey Fire Chief Mike Maguire at the appreciation luncheon held Wednesday for all the local volunteers and employees who responded to flash flooding that occurred in Saucon Valley over the weekend. 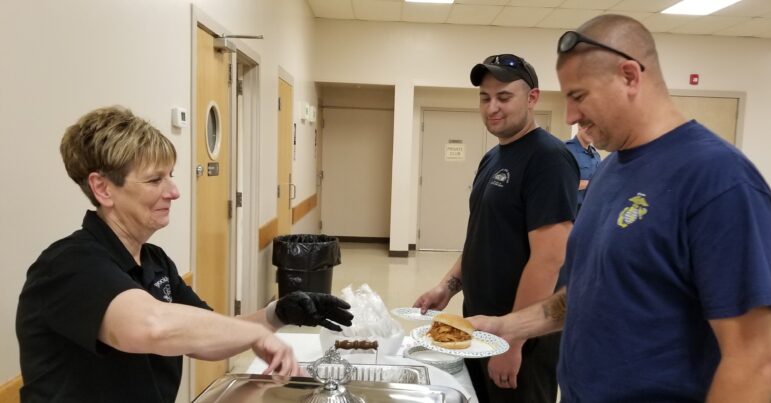 Bobbie Gianguzzi of Brooklyn’s Catering at the Springtown Inn serves barbecue sandwiches to Dewey Fire Chief Mike Maguire and volunteer firefighter Jay Young at the appreciation luncheon held Wednesday at Dewey Fire Company for all the local volunteers and employees who responded to flash flooding that occurred in Saucon Valley over the weekend.

The next time you think about attempting to drive across a flooded roadway, take a moment to think about the police officers, firefighters, emergency medical personnel and others who might have to risk their lives to rescue you if you find yourself in harm’s way. 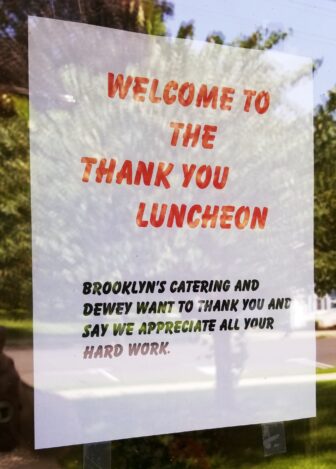 The men and women who put their lives on the line locally–many of whom are volunteers–are well aware of the risks involved in rescue operations; a duty some of them were called upon to perform Saturday when flash flooding inundated the parking lot of a Lower Saucon Township banquet facility, stranding a wedding party of more than 40 people and necessitating a watery rescue that involved dozens of first responders and the commandeering of a school bus.

For their heroism and dedication to duty, the police, firefighters, EMS staff and municipal staff involved in emergency operations were treated to an appreciation luncheon at Dewey Fire Company in Hellertown Wednesday.

The two-and-a-half hour buffet luncheon was organized by Hellertown mayor David Heintzelman and catered by Brooklyn’s Catering at the Springtown Inn.

In addition to sharing some delicious food, it was also an opportunity for the local heroes to reflect on the memorable experiences they shared during the weekend’s serious flash flooding, which also led to a water rescue on Easton Road in Lower Saucon Township.

For many members of the township and borough police departments, other employees of both municipalities and volunteers from Dewey Fire Company, Steel City Fire Company and Lower Saucon Fire Rescue, the time they sacrificed with their families to respond to the flash floods was seemingly “all in a day’s work.”

However, their efforts should never be taken for granted, Heintzelman said.

“Let us be mindful of those emergency management personnel who have risked their lives to save others,” he wrote in a Facebook post Sunday. “From employees to volunteers, we have the best trained and dedicated persons one could ask for! Thank you to all police, borough and township employees, volunteers from Hellertown and Lower Saucon and beyond for keeping us safe.”