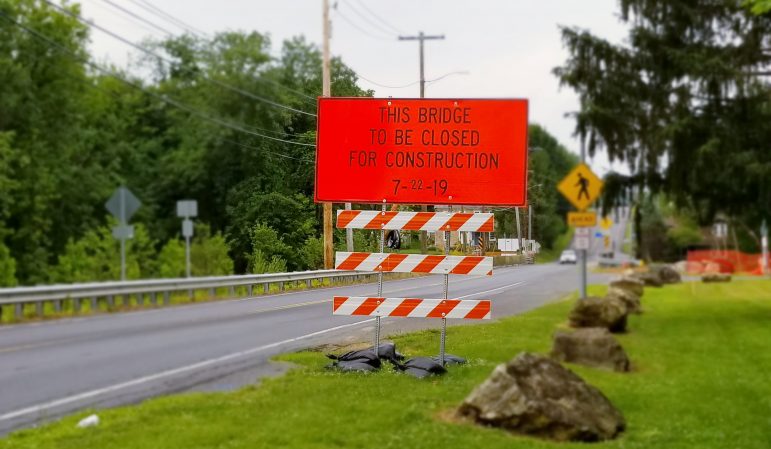 The replacement of the Water Street Bridge was originally expected to begin immediately after Independence Day. In June the two-month project’s scheduled start date was set for July 15. It was then pushed back to July 22. Then it was delayed til Monday, July 29, which means the new bridge likely won’t open til about Sept. 27. This view is looking west toward the bridge from Hellertown’s Water Street Park.

Update: On Tuesday, July 17, PennDOT and the contractor for the Water Street Bridge replacement project announced that the project’s start date had again been postponed for a week. The bridge closure was expected to–and did–begin on Monday, July 29. The estimated end date for the project is Friday, Sept. 27. Residents of the area should continue to monitor signage by the bridge and local news reports. The detour in place on Easton Road–which is closed between Ringhoffer Road and Countryside Lane in Lower Saucon Township for a culvert replacement–is through Monday, Sept. 2.

The start of the two-month Water Street Bridge closure has been delayed again–until Monday, July 29–according to PennDOT and project contractor Kriger Construction, who announced the postponement Wednesday.

In June, the two-month project’s scheduled start date was set for July 15. It was then pushed back to July 22; a date that was publicized on signs positioned on either side of the bridge that were subsequently removed.

The new start date means the bridge likely won’t open til around Sept. 27, more than a month after school begins.

The congestion traffic to and from the Saucon Valley School District campus will likely cause at the intersection of Main and Walnut streets prompted Hellertown Borough Council to vote Monday to send a letter to PennDOT officials requesting money to pay for a police officer to man the Walnut Street traffic light during peak arrival and dismissal times.

Click here to view the detour routes for cars and trucks during the bridge closure.

The 1938 Water Street Bridge–which is located about a quarter mile west of Main Street in Hellertown–is being replaced due to structural deficiencies.

The bridge spans the Saucon Creek and connects the borough with western Lower Saucon Township and the southernmost part of the city of Bethlehem.

An old dam just south of it will be removed as part of the replacement project, with that removal expected to take place between Aug. 2 and Aug. 10.

Easton Road between Ringhoffer Road and Countryside Lane is closed from through Sept. 2 for the work, which is being done to replace a failed section of pipe that carries a branch of the Saucon Creek underneath the roadway.