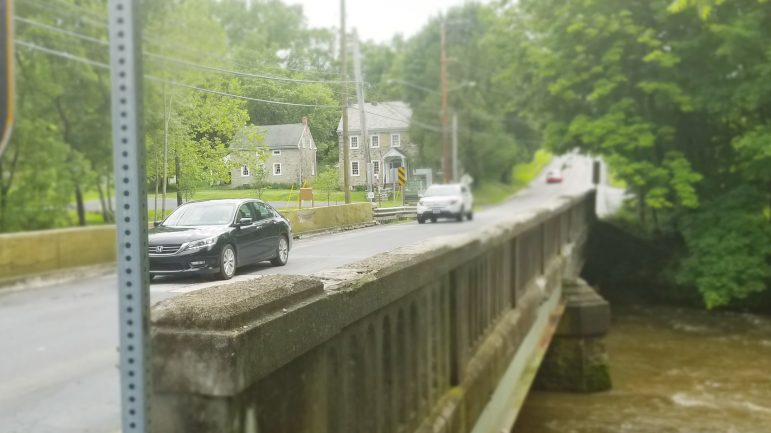 Cars travel across the Water Street Bridge from Lower Saucon Township into Hellertown. The bridge will be closed for two months beginning Friday, July 29 for the construction of a replacement span.

The aged Water Street Bridge is in its final days as a work of engineering that still fills a need: namely, transporting thousands of vehicles daily across the Saucon Creek, between Hellertown borough and Lower Saucon Township.

On Tuesday, borough officials announced the two different detour routes that will be in place once the bridge is closed next month, so a replacement span can be built.

The closing date is now Monday, July 29, and the detours are now expected to be in place through Friday, Sept. 27.

The truck detour route is longer. Trucks will have to take Main Street (which becomes Hellertown Road in Bethlehem) north into South Bethlehem. The route continues on E. Fourth Street to Daly Avenue to E. Third Street to Wyandotte Street (Rt. 378) to Seidersville Road to Hickory Hill Road to Friedensville Road, or vice versa. For maps of the detour routes, see below.

The Water Street Bridge is a two-lane steel I-beam bridge that is being replaced because it is both structurally deficient and functionally obsolete.

The current bridge was built in 1938, is 117 feet long and is used by an average of more than 7,900 motorists each day, according to PennDOT’s interactive bridge conditions map.

PennDOT awarded the contract for the new bridge to Kriger Construction of Dickson City, Lackawanna County. Kriger will have 60 days to complete the project–barring any delays caused by inclement weather–or face penalties.

It was previously announced that the new bridge will include a walkway that will connect Hellertown’s Water Street Park with new sidewalk leading from the west side of the bridge to the intersection of Friedensville Road (Water Street) and Creek Road. From there, pedestrians will be able to cross Creek Road and continue walking on the pathway that leads to Saucon View Apartments and Lehigh University’s graduate housing.

Additional details about the bridge closure and the detour will be shared by the borough via their email alert system and social media pages:

The impending bridge closure forced the relocation of this year’s Saucon Valley Farmers’ Market–which is open from 9 a.m. to 1 p.m. every Sunday–to the field next to the Hellertown Area Library.

About a mile south of the Water Street Bridge, the Northampton County-owned Meadows Road Bridge in Lower Saucon Township has been closed since April 2018 due to structural problems.

Built in 1858, the single-lane humpback bridge is one of the oldest bridges in the county, which has said it will be rehabilitated or replaced. However, no plans or work timeline have yet been made public.

About a mile to the north of the Water Street Bridge, the Seidersville Road bridge in the City of Bethlehem also remains closed as a result of decay.

Also owned by Northampton County, that bridge dates from the 1930s and was closed due to structural deficiency in 2011. The county has said it has no plans to repair or replace the metal truss bridge. 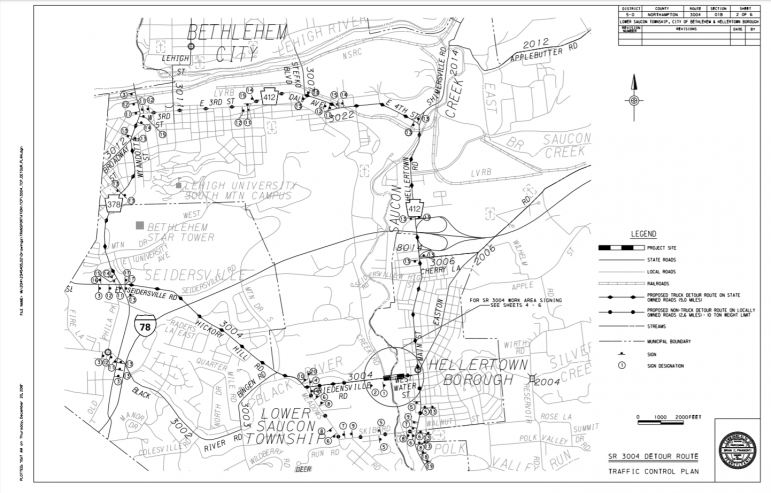 This map shows the different detour routes for cars and trucks. The car detour is much shorter and does not require the use of South Bethlehem roadways.