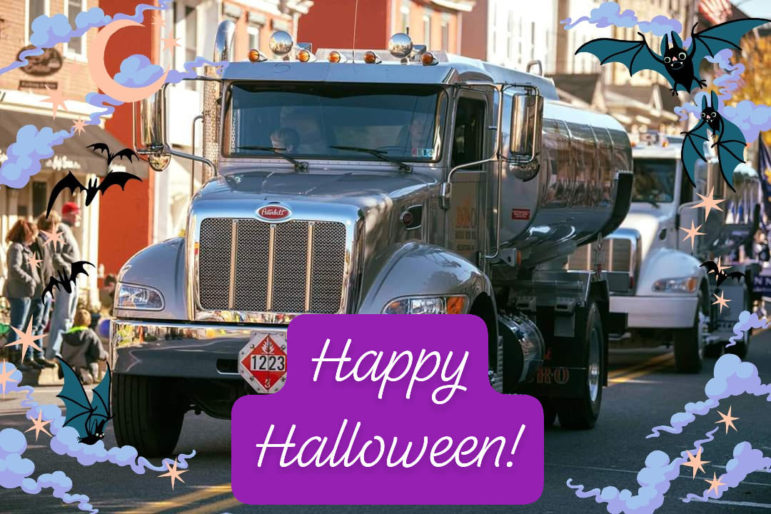 Local favorite Bucks Run Oil returns to the Saucon Valley Spirit Parade this year with their fleet of shiny home heating oil and diesel fuel trucks. Bucks Run Oil LLC is also a band sponsor for the parade. The Lower Saucon Township-based business is owned by Fred and Rachel Magargal (FILE PHOTO). For photos from the 2018 Spirit Parade, click here.

If you want to know the order in which the participants in Sunday’s Saucon Valley Spirit Parade will appear in it, so you can get that perfect photo of someone special or cheer extra loud for a friend or relative, read on. Below you’ll find the order of participants in each of the parade’s seven divisions, beginning with the Dignitary Division.

For more information about this year’s parade, please click here.

The 2019 Grand Marshal is Joe Delfoe, and this year’s parade theme is Halloween. The parade judges are Janice Repnyek, Kimberly Verno Fleming, Lisa Johnson Scheetz and Kelly Kunsman. The parade is held rain or shine and begins at 2 p.m. on Sunday, Oct. 20.

Saucon Source will broadcast the parade on Facebook live starting just before 2 p.m. Follow Saucon Source so you can watch it live from wherever in the world you are now.

*Please note that although the lineup below was correct as of the time of publication, it is subject to change at the discretion and based upon the needs of the parade committee.

Astronaut Griffin escorted by his Out of This World Parents

Habitat for Humanity of the Lehigh Valley

Ebenezer New Reformed Church: “Out for a Sunday Drive”