As icy and unpleasant as Sunday’s weather was, it was mild compared to what the National Weather Service says our area can expect to experience Monday, when it says the impact of impending winter weather north of the I-78 corridor will be “significant.”

The NWS has issued a winter storm warning that includes Bucks, Northampton and Lehigh counties for 4 a.m. Monday to 1 a.m. Tuesday, when it says heavy snow is now expected, with totals of 6 to 9 inches and locally higher amounts possible, especially across higher elevations.

“Travel will be very difficult,” the NWS said in a statement about the warning. “The hazardous conditions will impact the morning and evening commute. If you must travel, keep an extra flashlight, food and water in your vehicle in case of an emergency. The latest road conditions for the state from can be obtained by calling 511.”

The news that heavy snow is now on the way may be a surprise to some residents, since earlier Sunday forecast snow totals were downgraded from 2 to 5 inches, to 1 to 4 inches.

Forecast models released during the day, however, led meteorologists and weather experts to radically alter their predictions.

Lehigh Valley Weather Authority has declared a “Storm Mode” on their Facebook page, where forecaster Tony Luchini said “heavy snow banding” from the storm “will be similar to the January 2016 blizzard, where the low pressure actually stalled off the coast and kept pummeling eastern pa with nonstop heavy snow.”

On a final call map for Monday’s storm, Luchini put the Lehigh Valley in a zone where 5 to 10 inches of snow could fall, and said the snow should begin between 7 and 9 a.m.

Ordinarily that is when children would be heading off to school, however schools are closed Monday for the final day of the Thanksgiving recess.

Area residents should continue to monitor their local weather forecasts for updates on this developing winter storm. 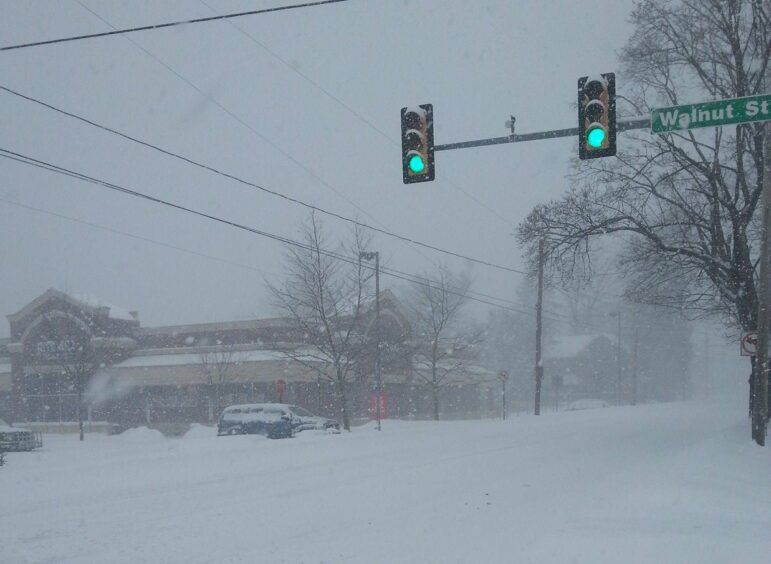 The normally busy intersection of Walnut and Main streets in Hellertown borough is deserted as heavy snow falls during a blizzard in January 2016. One local weather forecaster says the ingredients for Monday’s storm are similar to those that produced the paralyzing snowstorm nearly four years ago. (FILE PHOTO)