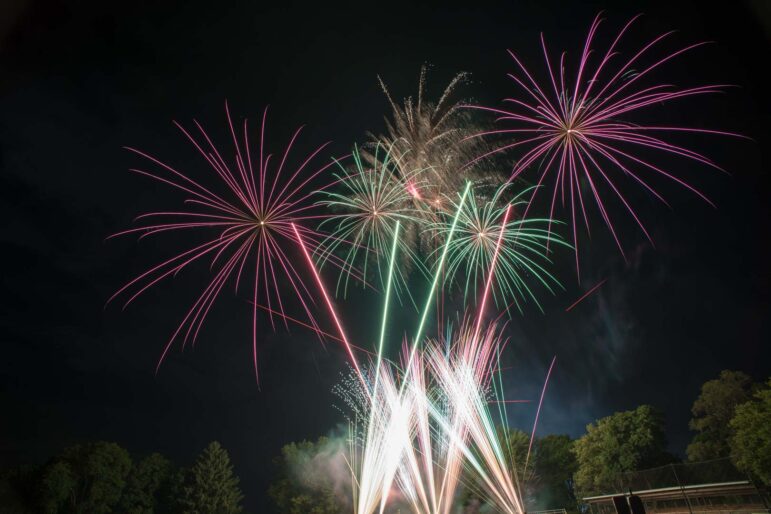 The Dewey Fire Co. fireworks show is traditionally held in Hellertown’s Dimmick Park in mid-July, near the end of the company’s annual five-day carnival. Since the 2020 carnival was canceled in April–as a result of the coronavirus pandemic–the fate of this year’s show has been in doubt, however. Now, a community-led effort to save the beloved sparklers is under way, with the fire company accepting donations from local residents and support from business partners.

Just as there was no joy in Mudville when Casey struck out at bat, there was seemingly little joy in Hellertown when borough council Monday declined to help underwrite this year’s Dewey Fire Co. fireworks display.

There is still hope for the beloved boomers, however, thanks to community members who are raising money to help the volunteer fire company pay for them.

Fire company president Gail Nolf announced in a Facebook post in the Hellertown, Pennsylvania group that in spite of the setback, fireworks discussions “are occurring.”

“If you are willing, and have the means, we are accepting donations for fireworks,” Nolf said. “As a team we chose not to actively solicit during the hard struggles of Covid. It seems, however, that this community is speaking out that you would like to support community fireworks.”

“We lost a lot this year,” she added. “But graduation for our Saucon Valley High School 2020 seniors was absolutely amazing and we need to continue to be that one community.”

Nolf said that since nothing has been finalized with regard to a summer fireworks show, the location in which it would be held in either the borough or Lower Saucon Township is still up in the air.

The timing is also undecided, although Nolf said that assuming that everything comes together, the fireworks won’t be held in July as normal.

Typically, the show is held in Dimmick Park on a Friday night during the fire company’s annual carnival, which this year was canceled due to the coronavirus pandemic and restrictions on the number of people that can gather in a place at one time.

Nolf said checks should be mailed to Dewey Fire Company Fireworks, c/o Gail Nolf, 502 Durham St., Hellertown, PA 18055. They may also be left in the fire company’s mailbox on the front of the building, she said in a comment on her post.

“We have a deposit down on a show,” she explained, adding that the fire company is working with partners at Celebrations Fireworks, Steel Club and other businesses or organizations that continue to be supportive of the effort and want to help make the fireworks happen.

News that council would not contribute money was met with considerable consternation among Facebook users on Saucon Source, although as borough council president Tom Rieger noted in a Facebook post on his council president page, the borough doesn’t typically contribute anything to help pay for summer fireworks.

The only year in which a contribution was made toward the show was in 2013, which was because a special centennial celebration was being held, he said.

“The borough has never on an annual basis contributed to the carnival or fireworks,” he stressed.

Another reason the fire company was ineligible to receive a donation toward a fireworks show is that they were unable to meet the requirements of the borough’s donation policy.

“The Borough has a very clear donation policy which requires a complete clean audit for the most recent fiscal/prior year for the borough to donate tax payer money to any non-governmental entity,” Rieger said in his statement. “Unfortunately Dewey only this spring completed its 2018 audit, and since this is 2020, the 2019 is required.”

“Also that 2018 audit left much to be desired in a proper functioning entity,” he added. “It showed a lack of internal and business controls which had plagued the organization for years. This led to several hundreds of thousands of dollars being embezzled. … Until there’s an independent audit showing progress on instituting those reforms at Dewey it would foolish to contribute any of the tax payers money.”

Rieger qualified his remarks by noting that there is a new leadership team in place at the fire company that includes Nolf and is actively working on improving its financial transparency.

“(They are) putting recommendations in place from that 2018 audit,” he said. “I have have the utmost faith in Gail and her new team.”

For her part, Nolf indicated that she and the other officers were aware of the challenges they would face in asking for money from the borough for the fireworks display.

“Borough council chose not to financially invest this year because of some lapses that occurred before this Dewey team got into office on Feb. 25, 2020,” she said in her post. “Those were stated on another post and another page. I was aware that funding might not be forthcoming this year and it’s not reflective of our new Dewey team.”