A proposed rezoning of land along Creek Road in Bethlehem will finally be considered by Bethlehem City Council following a months-long delay caused by the COVID-19 shutdown, according to the city’s Director of Planning and Zoning, Darlene Heller.

The development is proposed by Abraham Atiyeh, and includes plans to build an independent senior-living facility with 40 units accompanied by 60 parking spaces. In order for Atiyeh to build the complex, the city would have to rezone the nearly seven-acre parcel of land he owns at 2105 Creek Road from from rural residential (RR) to residential retirement complex (RRC).

Atiyeh’s Creek Road property is located at the city’s southernmost tip, where it borders both Hellertown borough and Lower Saucon Township.

The proposed land rezoning was met with opposition from a Bethlehem resident, Robert Ashford, who launched a website/petition called “Save Creek Road” to draw attention to it. Within the website, Ashford lists a variety of reasons for his opposition to the development, including the area’s flood-prone location and the narrowness of Creek Road.

Ashford, who is a resident of the Stever Mills development located across the street from Atiyeh’s land, also cited environmental concerns with the proposed development, which he said were backed up by Pennsylvania’s Department of Environmental Protection.

The development was also met with opposition from local city planners. Hellertown Borough Council members expressed formal opposition to the proposed rezoning at their Feb. 18 council meeting. Council members echoed Ashford’s concerns over the land’s proximity to a flood zone, as well as the width of Creek Road.

The rezoning decision is ultimately up to Bethlehem city officials.

The city’s planning commission voted against Atiyeh’s request for rezoning at their March 12 hearing, held just before the pandemic shutdown began. The commission’s vote is only a recommendation, but Bethlehem City Council may consider its counsel when they review the item in September.

Heller said her office also has received a new submission from Atiyeh for a residential development consisting of 10 twin homes on the Creek Road property. The new proposal was submitted to the Bethlehem Zoning Hearing Board for variances rather than to City Council for a revision to the zoning ordinance, according to Heller.

The Save Creek Road website refers to the new proposal as a “back up,” which Ashford said he believes is proposed in case the original development plan is shot down.

“This type of development has many of the same issues as the rezoning,” the website states.

A zoning hearing date for the townhome development plan has not yet been scheduled, Heller said. 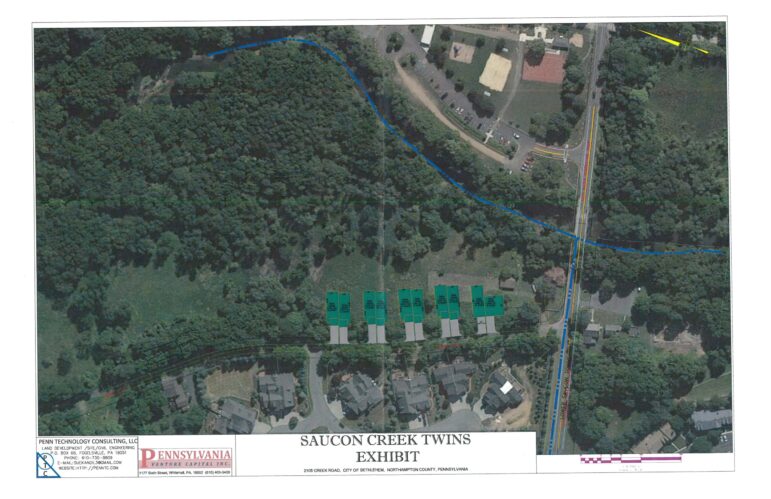 Prominent local developer Abraham Atiyeh recently submitted new plans to the City of Bethlehem for 10 twin homes he wants to build on land he owns along Creek Road, near Hellertown. The Save Creek Road website has labeled the new plans a “back up” in case Atiyeh’s proposed development of 40 independent senior-living units on the property is struck down.