A woman who was initially identified by police and in court records as homeless was committed to Northampton County Prison after police say she stole a “Trump for President” sign from the rear of a residence in the 1500 block of Main Street in Hellertown borough Thursday.

In a news release Monday, police said Samantha Elizabeth Donohue, 30, no current address, was identified in a video surveillance recording that allegedly showed her exiting a home in the 1500 block of Burkhardt Street and then removing the sign.

“It was later learned that Samantha Donohue had taken three other signs from a residence on Wagner Avenue,” police said of their investigation.

They added that all four signs were recovered, but said one of them was damaged.

Police did not say which presidential candidate’s name the three Wagner Avenue signs had on them, or whether they were political campaign signs at all.

According to the news release and court records, following a preliminary arraignment before District Judge Alan Mege in Lower Saucon Township Thursday, Donohue was committed to Northampton County Prison in lieu of $10,000 bail.

Court records show that the following day, Donohue was granted a 10 percent bail option, and that $1,000 was subsequently posted as private surety on her behalf by an Easton woman.

A preliminary hearing in Donohue’s case is scheduled to be held Tuesday, Oct. 13 at 10:15 a.m. before Judge Mege in Northampton County District Court 03-2-04.

The records do not list an attorney for Donohue.

Police in Hellertown and many other nearby municipalities have been busy investigating countless cases involving the theft of political campaign signs this election season. 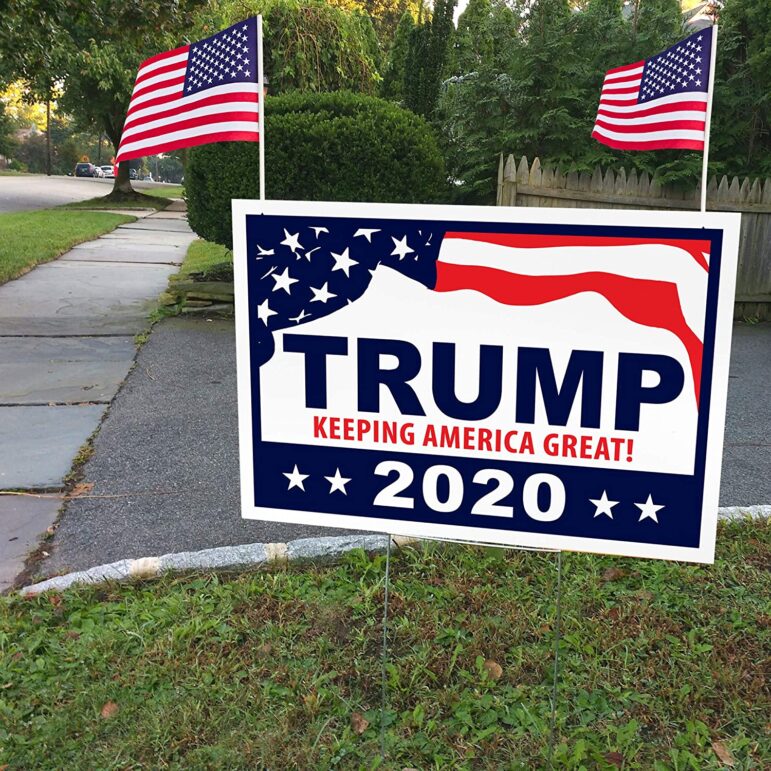 An example of a ‘Trump 2020’ sign. NOTE: This is NOT one of the signs referenced in the story.