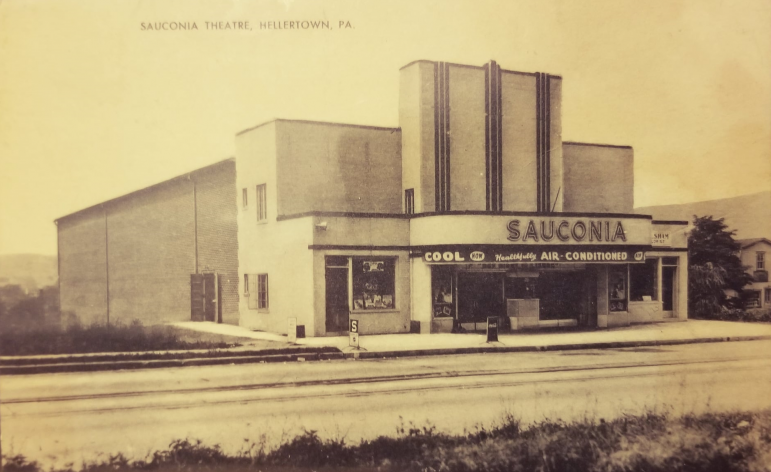 A postcard mailed in 1943 shows the former Sauconia theater on Main Street in Hellertown. The movie theater opened in 1940 and closed circa 2001, by which time it was known as The Movies. In the 60 or so years it was open, thousands of local residents acquired treasured memories of the theater. Today it houses two local businesses: a dentist and a high-end salon.

It’s been nearly 20 years since Hellertown’s first and only movie theater closed forever, and more than 80 years since the Sauconia showed its first motion picture, but longtime local residents still treasure memories of the cinema later called simply, “The Movies.”

In response to a post last week on Saucon Source’s Facebook page, hundreds of readers nostalgically recalled the bygone era of watching new films in the movie theater on Main Street; a theater that now houses a dentist’s office and a high-end salon.

The post was of a 1943 postcard view of the theater, which was built in the streamline Moderne style of architecture popular around the time of World War II.

The Sauconia, as depicted in the photograph, offered air conditioning; a relatively rare creature comfort at the time.

In response to our question, “What’s a movie you can remember seeing at The Movies?” here’s a sampling of what readers had to say (years of release have been added in parentheses in some cases for reference):

What do you remember watching at the theater, and what else makes you nostalgic for it?