A Lower Saucon Township woman has been charged with retail theft (Misdemeanor 2) for allegedly stealing items from a convenience store in the township.

In a post on their Crimewatch site Wednesday, township police said Destini Lee Czaplinski, 27, allegedly stole three packages of beef jerky valued at $3.99 each and a mask valued at $8.99 from the counter inside Exxon, 3655 Rt. 378, at around 12:30 p.m. Monday. 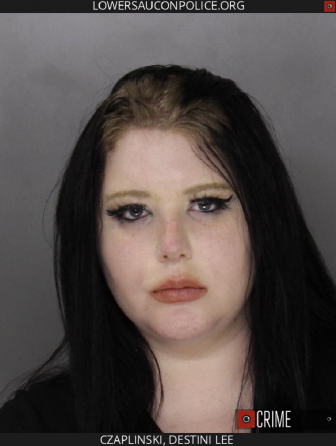 After Czaplinski allegedly left the store without paying for the items, police said officers responded, viewed a store surveillance video in which she could be seen and “recognized (her) from prior incidents as Destini Lee Czaplinski.”

According to the Crimewatch post, officers then went to Czaplinski’s home, where she allegedly admitted to taking the merchandise.

“Further investigation revealed one prior conviction for retail theft and an outstanding bench warrant from the Northampton County Sheriff’s Department,” police said.

After Czaplinski was taken into custody and transported to township police headquarters, the Northampton County Sheriff’s Department took her into custody, the Crimewatch post stated.

Court records indicated that as of Monday, Czaplinksi was incarcerated at Northampton County Prison. Those records are from a different case and relate to outstanding charges of retail theft filed against her by the Bethlehem City Police Department earlier this year.

According to the criminal docket for the Lower Saucon Township case, a preliminary hearing for Czaplinski is scheduled to be held Monday, May 17 at 9 a.m. before District Judge Alan Mege in Northampton County District Court 03-2-04.

The docket did not list an attorney for Czaplinski.

Note: All individuals charged with a crime are presumed innocent until proven guilty in a court of law. This story was compiled using information from the Lower Saucon Township Police Department and Northampton County court documents.