Springfield Township Police have issued a warning to motorists they say are speeding down local roads to get around a Richlandtown Pike bridge closure: Slow down, or risk being ticketed.

On Tuesday, police said that since the Cooks Creek bridge was closed, traffic has increased substantially on Quarry Road, which they noted is “is a narrow, winding, rural roadway that is not built for high speeds or large vehicles.”

Quarry Road has a posted 25 mph speed limit and the department said its officers will “be out there, whenever possible, enforcing speed.”

They added that they are currently working with PennDOT officials on a plan to reduce and possibly eliminate commercial vehicle traffic from Quarry and Gruversville roads, as a safety precaution.

“These roadways simply aren’t engineered for this type of traffic,” police said in a statement that was published on their Crimewatch page under the heading, “Enforcement Blitz.”

Township residents are encouraged to contact the Springfield Police Department immediately by calling 215-328-8523 when they observe safety issues on either road.

For general concerns, residents may call 610-346-7600 or email the Chief of Police at chief@springfieldbucks.org.

In the published statement, the small department said it “will do the best we can with our given manpower.”

The Richlandtown Pike bridge over Cooks Creek is closed because it is being replaced, according to a post published on Springfield Township’s Facebook page earlier this month. The anticipated completion date for the project is Friday, Aug. 13, 2021.

Richlandtown Pike is closed in both directions between State and Quarry roads while the project is underway. The official detour around the closure utilizes State Road and Rt. 212, according to the map shared by the township on Facebook (below). 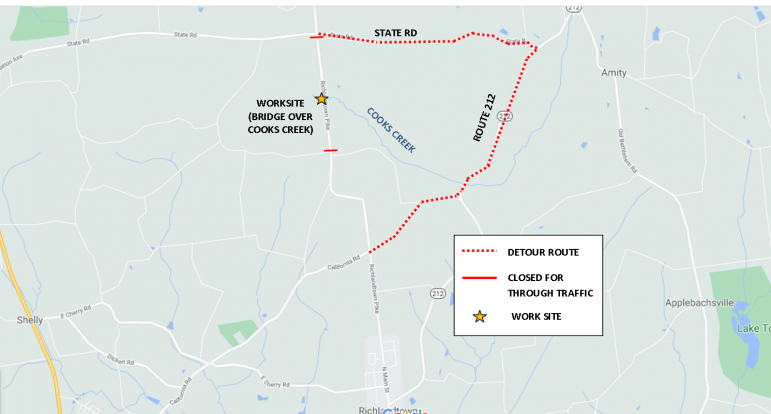 The Springfield Township Police Department is reminding motorists that Quarry and Gruversville roads are not designed to handle heavy or speeding traffic. Police said the local roads are being utilized by drivers trying to get around a bridge closure on Richlandtown Pike. The official detour route, above, utilizes State Road and Rt. 212. The bridge is in the process of being replaced, with a new span expected to open in August.