It may seem like a flight of fancy today, but more than a century ago, prominent Hellertown officials believed the borough could soon become a city of 10,000 people by annexing adjacent areas, including parts of Lower Saucon Township. Their ambition is documented in a Morning Call story published on Nov. 8, 1918. It is worth noting that at the time, World War I was raging and the borough’s Thomas Iron Works was still in operation. The booming wartime economy combined with a rapid increase in the borough’s population–which more than tripled between 1910 and 1920–may have also given rise to the dream of a “City of Hellertown.” Lastly, in 1917 Hellertown’s neighbors to the north had become the City of Bethlehem, with the merger of South Bethlehem and Bethlehem. In 1910, Hellertown borough was home to just 915 souls, but by 1920 its population had ballooned to more than 3,000, according to U.S. Census data. Hellertown today is home to roughly 6,000 people. Its 2020 Census data will soon be released; just in time for the borough to mark the 150th anniversary of its incorporation in 2022.

Hellertown, with a population of 2,500, is planning to annex adjacent territory contiguous to the borough, which would take in portions of Freemansburg, Colesville, Bingen and Northampton Heights, which, according to its borough solicitor, Attorney R.C. Mauch would give it an estimated population of 10,000, or sufficient to become a third class city. At Monday night’s meeting of council, Mr. Mauch advocated this step by council and the members went on record as being heartily in favor of the idea. President Luther W. Eisenhart will appoint a committee of three members to have the necessary survey made.

Chief Burgess Frank Sutton stated that Hellertown citizens are opposed to any annexation with Bethlehem, but they look upon Mr. Mauch’s proposition with favor. 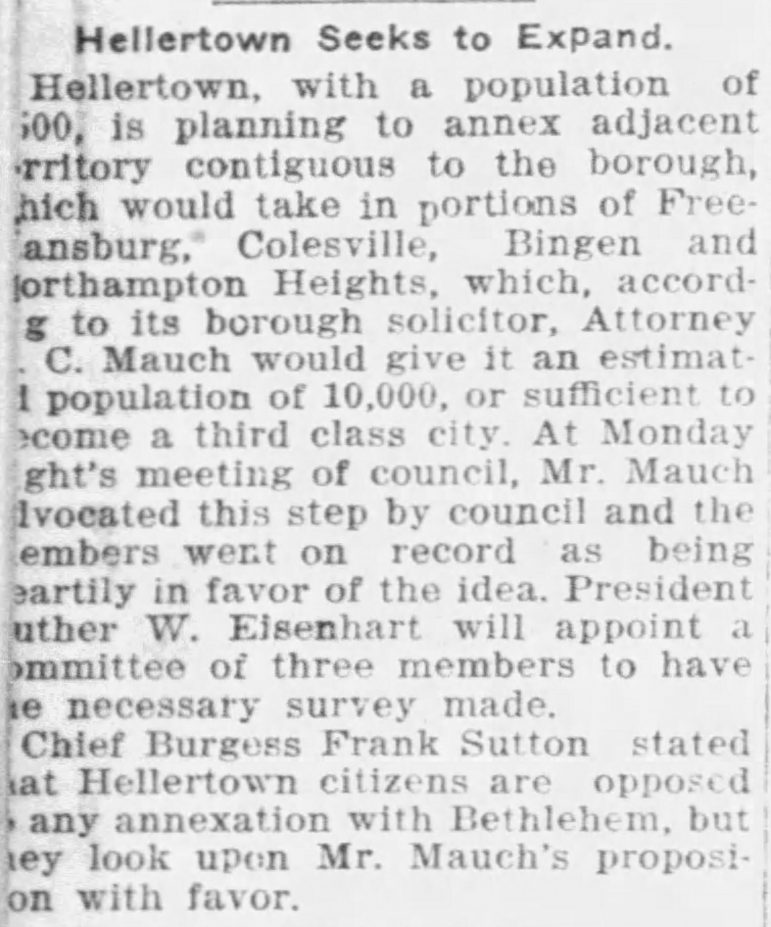 About this column: Olden Days is a Saucon Source series in which newspaper articles in the public domain are used to recall area news from the late 1800s and early 1900s.