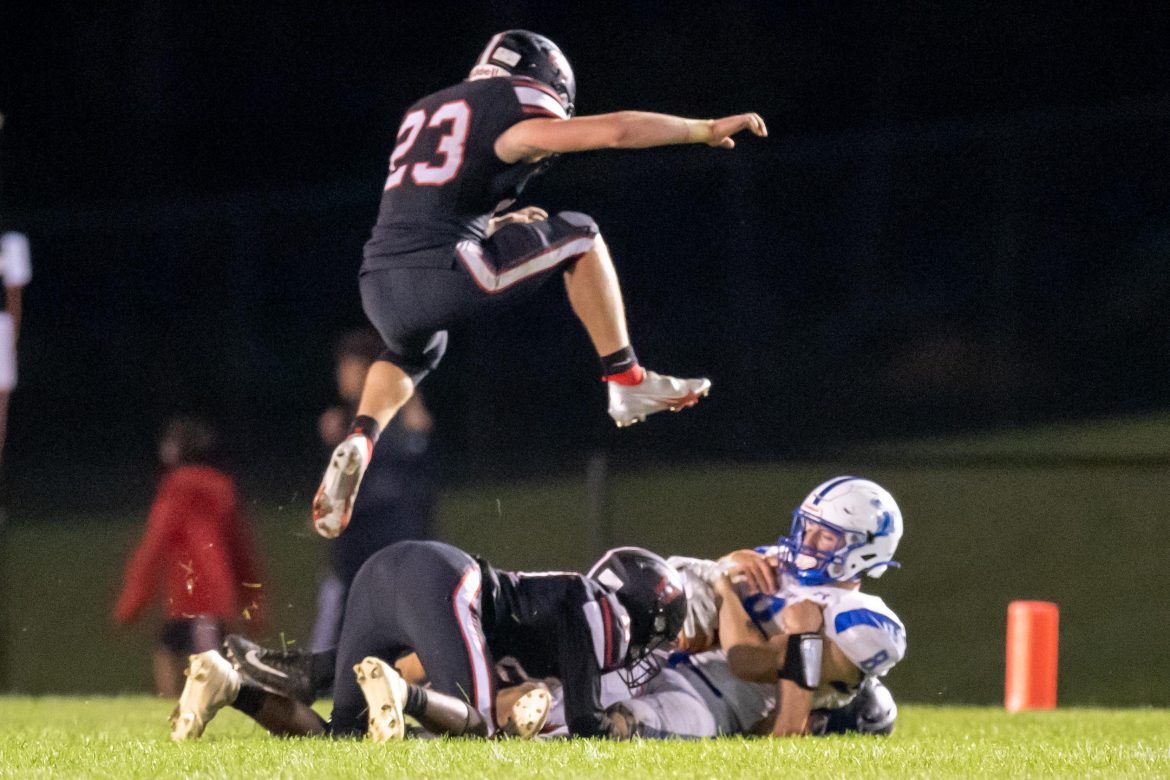 Friday night was full of spirited homecoming pomp and pageantry for the Saucon Valley community. Avia Weber and Brennen Van Helmondt were crowned Panther royalty for the 2021 school year.  And, there was a rivalry football game that was played against the Southern Lehigh Spartans.

It was not a great start for the Panther ballers.  Southern Lehigh took the opening kickoff and marched 77-yards for the opening score.  The Spartans successfully faked their PAT and jumped out to 8-0 lead about four minutes into the game.

The Panthers went three-and-out on their first possession and punted the ball away.  The Spartans went 44-yards in six plays to tack on another score.  With 3:25 remaining in the opening quarter Southern Lehigh led 15-0. 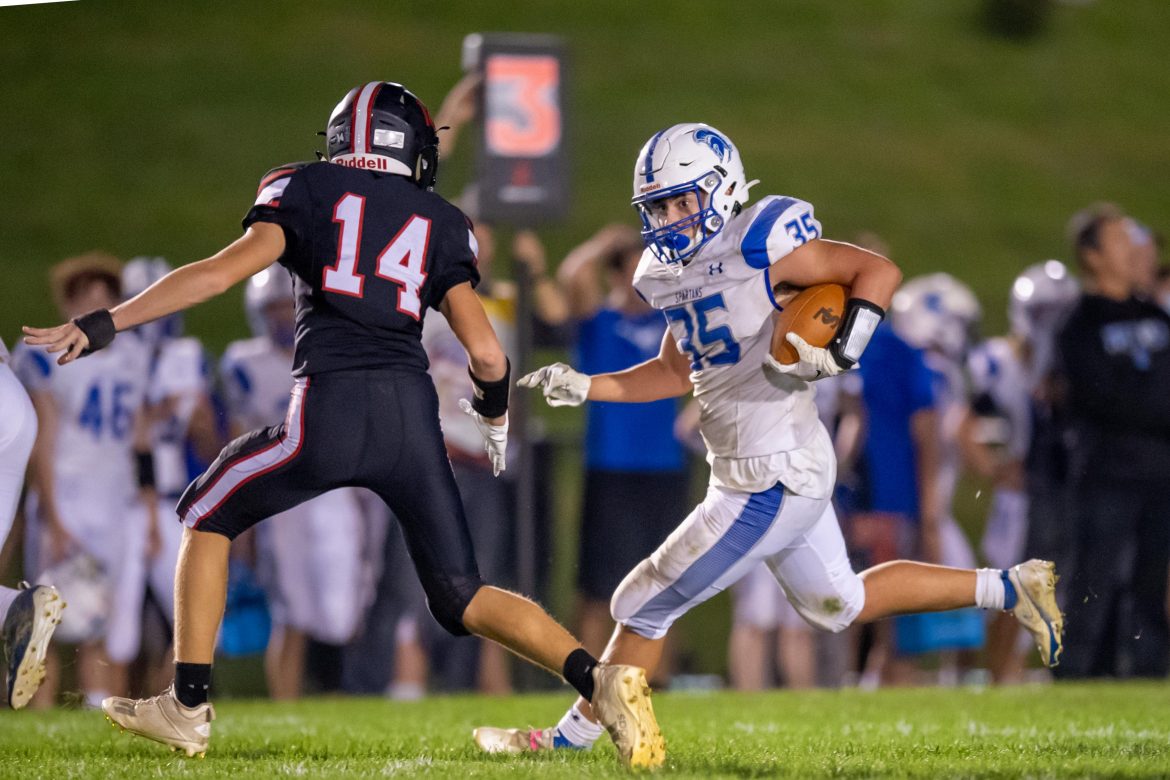 Behind solid offensive line play, Southern Lehigh’s Blaze Curry (#35) pounded the Saucon defense for most of the night.

The Saucon offense showed a little life on their next possession piecing together a six play drive.  However, the Panther drive ran out of steam and they turned the ball over on downs to Southern Lehigh at the Spartan 34-yardline. 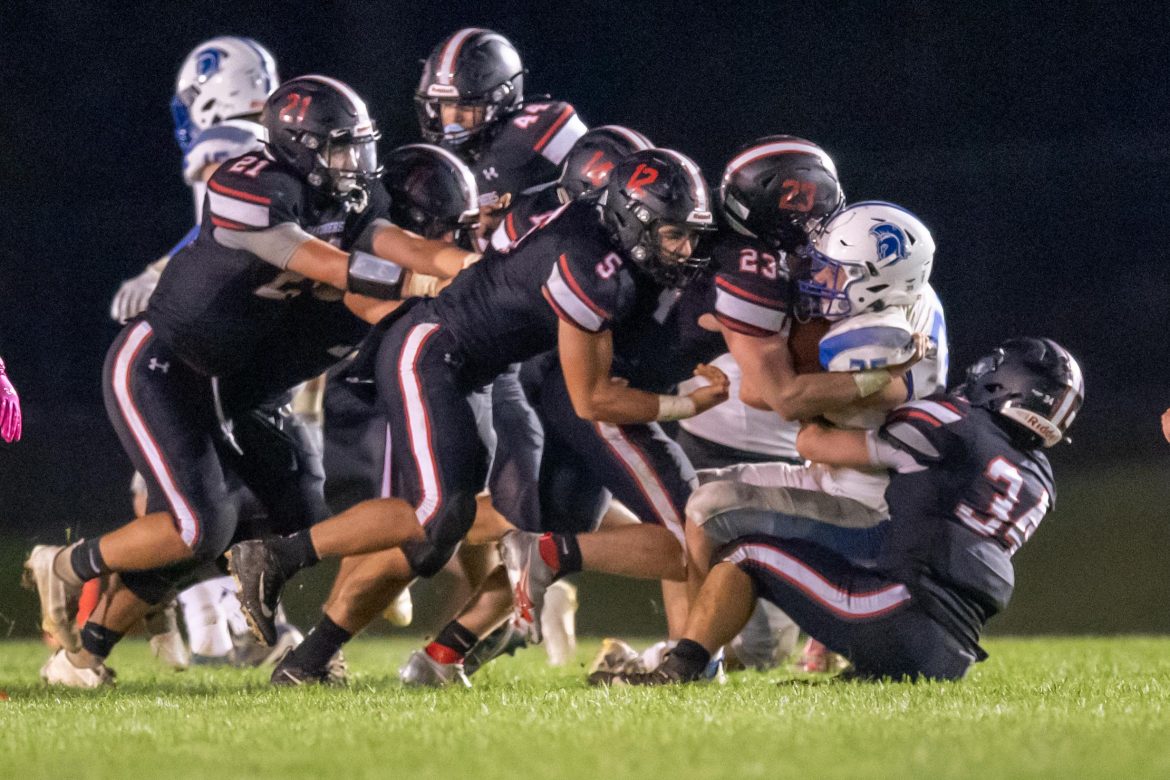 The Saucon Valley defense stuffed the Spartans on the following series and forced a punt.  Starting from their own 46-yardline early in the second quarter, the Panthers capitalized a 34-yard circus catch by Alex Magnotta with a 24-yard touchdown run by Damian Garcia.  Garcia took a pitch around right end and followed some good downfield blocking for the score.  Jacob Christopher connected on the extra-point and Saucon clawed back to a 15-7 deficit. 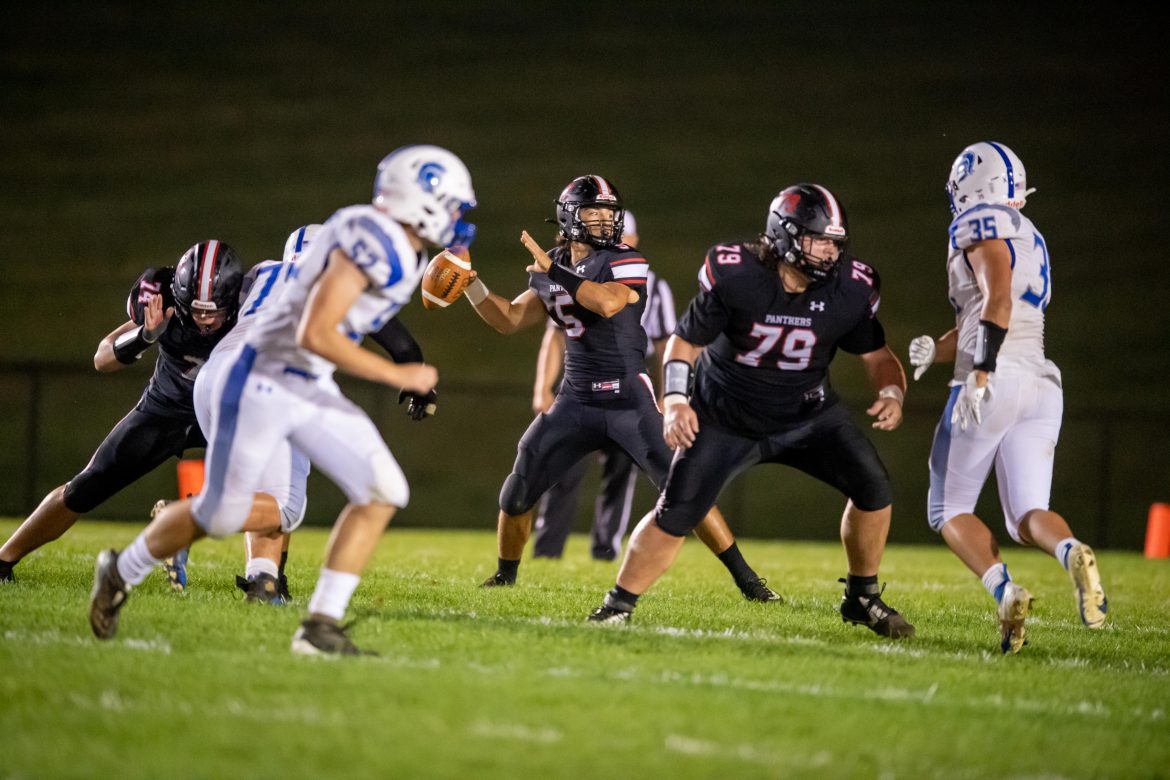 Saucon Valley senior quarterback Dante Mahaffey pulls the trigger to connect with an open receiver against the Southern Lehigh Spartans.

Southern Lehigh was again forced to punt by a suddenly stingy Panther defense.  The Saucon Valley offense came on to hit a trifecta of plays for another score.  First, senior quarterback Dante Mahaffey was able to scramble for a 21-yard gain out to the Panther 31-yardline.  On the next play, Mahaffey connected to senior Anthony Orlemann on a deep slant over the middle and into Spartan territory.  Immediately following Orlemann’s catch, Mahaffey hit senior receiver Ty Csencsits on a post-route down to the Southern Lehigh 23-yardline.  A ‘targeting’ penalty was added onto the play and put the Panthers down to the Spartan 11-yardline.  The Panthers, however had to settle for a Jacob Christopher 26-yard field goal.  Saucon Valley closed out the second quarter scoring and went into halftime trailing Southern Lehigh 15-10.

For as slow a start the Panthers had to open the game, it was quite the opposite to start the second half.  Starting the second half with the ball at their own 35-yardline, Mahaffey once again hooked up with Ty Csencsits on another post-pattern.  Then, from the midfield tripe, Mahaffey rumbled and ran for a 43-yard gain down to the Spartan 6-yardline.  Damian Garcia then finished the drive when he popped the Spartan defense for touchdown run up the middle. Christopher nailed the extra-point and the Panthers took a 17-15 lead ninety seconds into the second half. 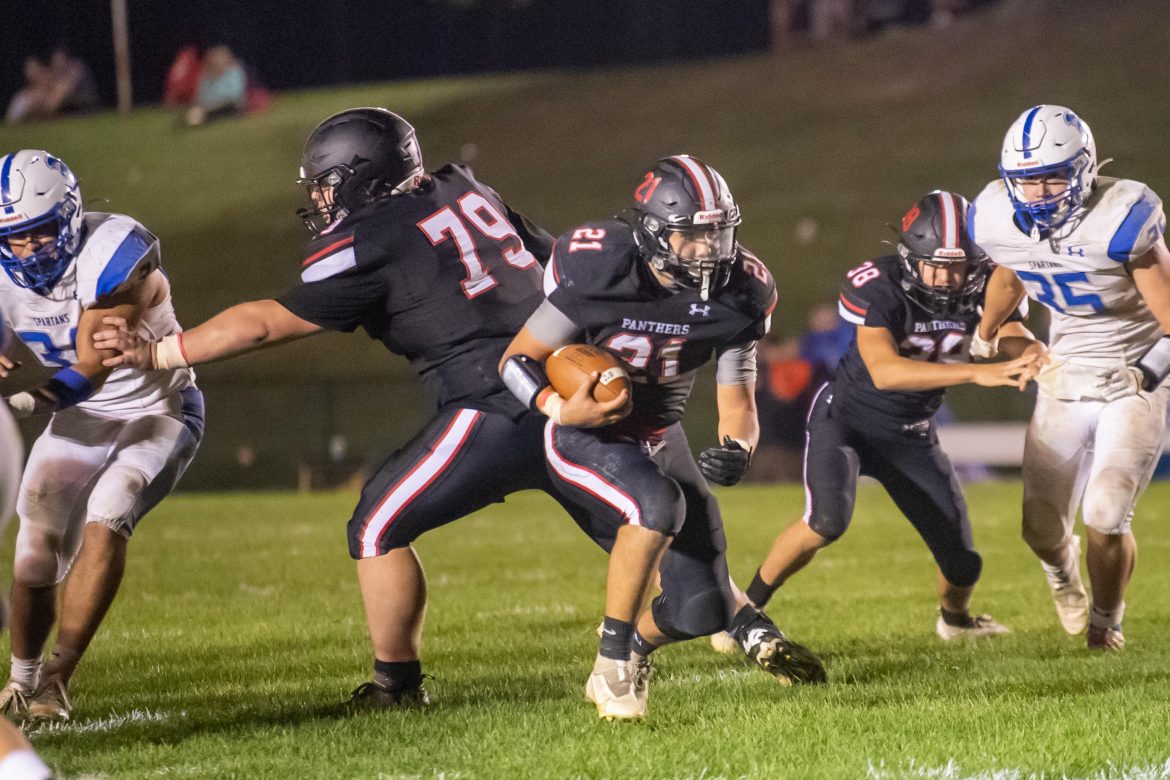 The Panthers Damian Garcia (#21) finding space for a score.

When the Saucon offense took the field at their own 35-yardline it appeared as if they were confident and ready to roll.  However, an incomplete pass on first-down, followed by a penalty on second-down was followed by a lost fumble.  The ugly sequence proved to doom the Panthers.  Southern Lehigh fell on the loose ball at Saucon’s 25-yardline and seven plays later cashed in when Tyler Rizzuto found space around his right end for a 3-yard plunge.  The extra-point was good and with :26 seconds to go in the third period, the Spartans built a 28-17 lead over the Panthers. 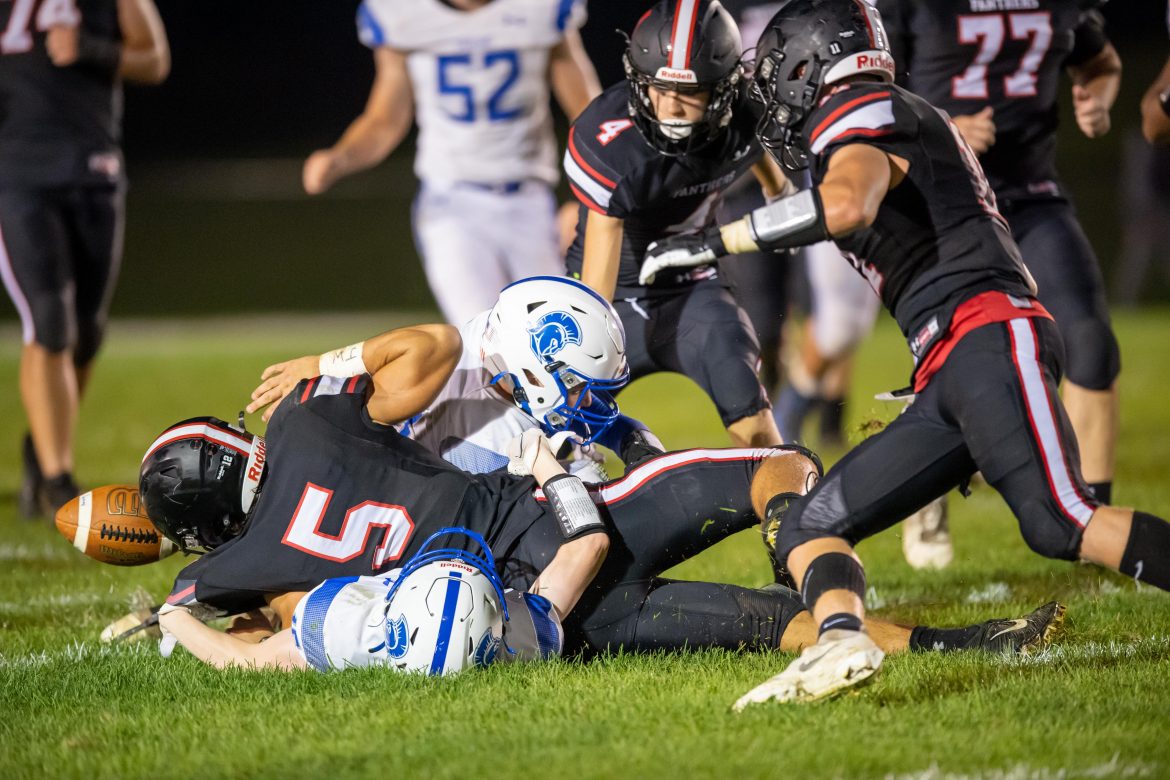 It was tough sledding late for the Panthers and Dante Mahaffey (#5).

Any hopes of a Panther comeback were squashed when the Spartan defense went on a fourth quarter feeding frenzy.  Following a holding penalty that backed the Panthers up to a 2nd & 20 situation from their own 20-yardline, Mahaffey was sacked two consecutive times.  In all, Southern Lehigh got to Mahaffey five times in the fourth quarter.  Nonetheless, the Panthers punted from their endzone allowing the Spartans to take possession 1st & 10 at the Saucon Valley 36-yardline.  Southern Lehigh slowly bled the clock and converted on two fourth-down situations. The Panthers did not give up a touchdown, but the Spartans nailed a 24-yard field goal for another three points with 2:18 left in the game.  Southern Lehigh went on to crash Saucon’s homecoming and win this year’s Saucon Creek Classic with a 31-17 victory.

UP NEXT:  Saucon Valley (3-4) will lick their wounds and make the trip to Lehighton (1-6) and battle the Indians.  This Friday night football fight is scheduled to kickoff at 7 p.m. 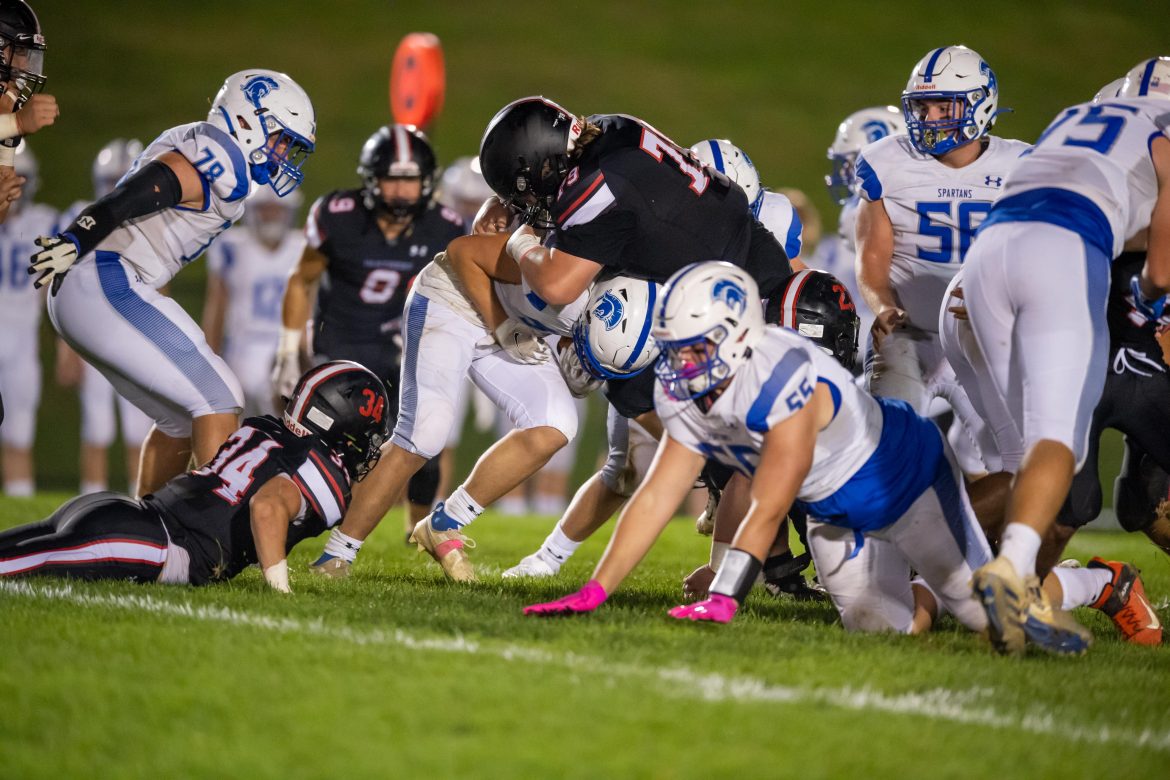 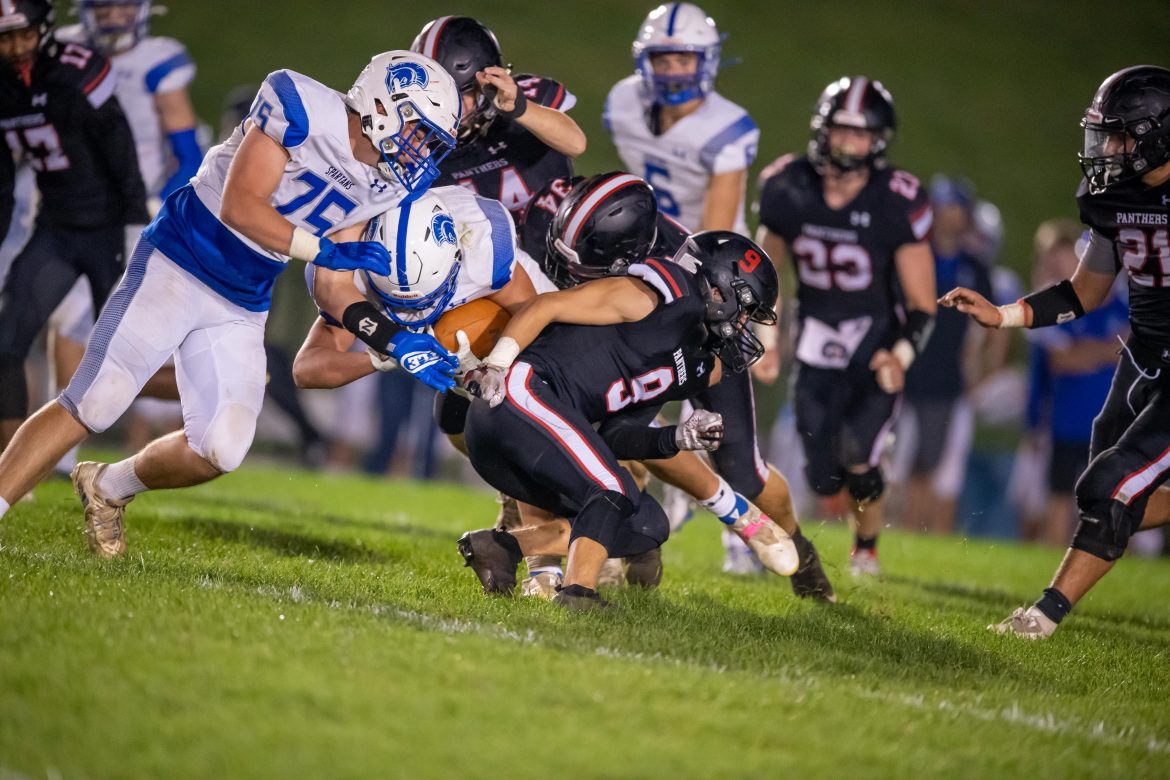 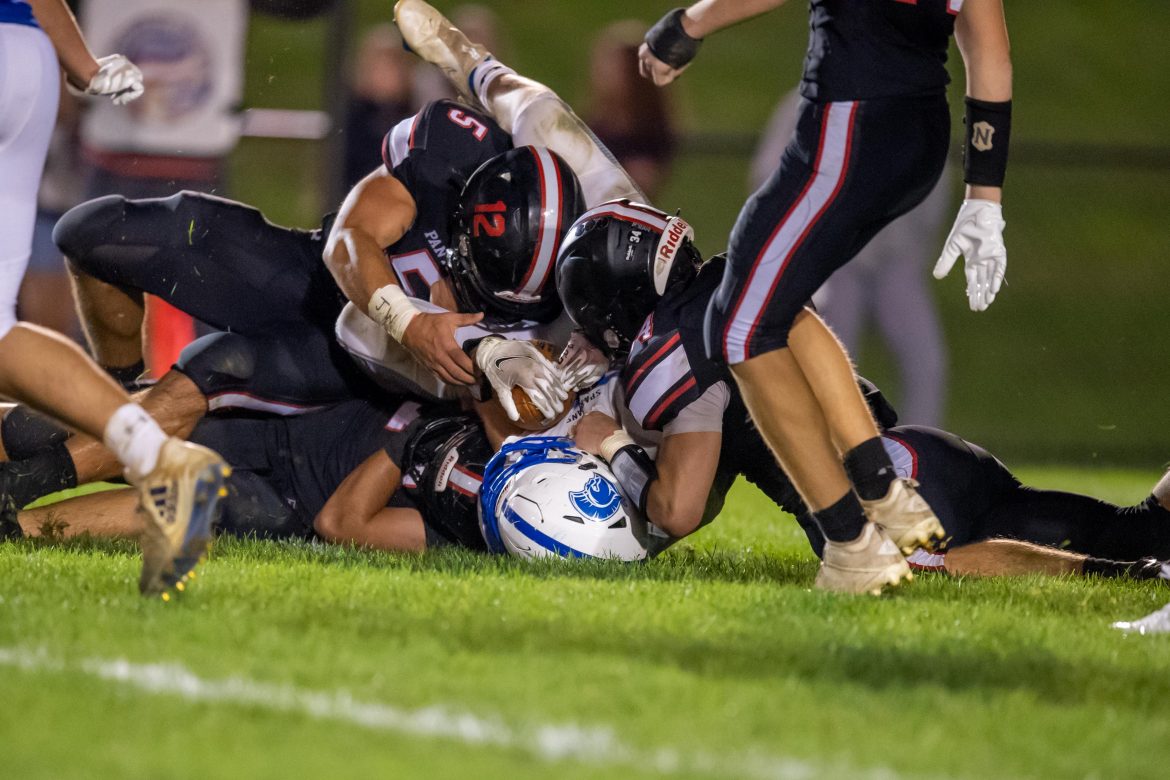 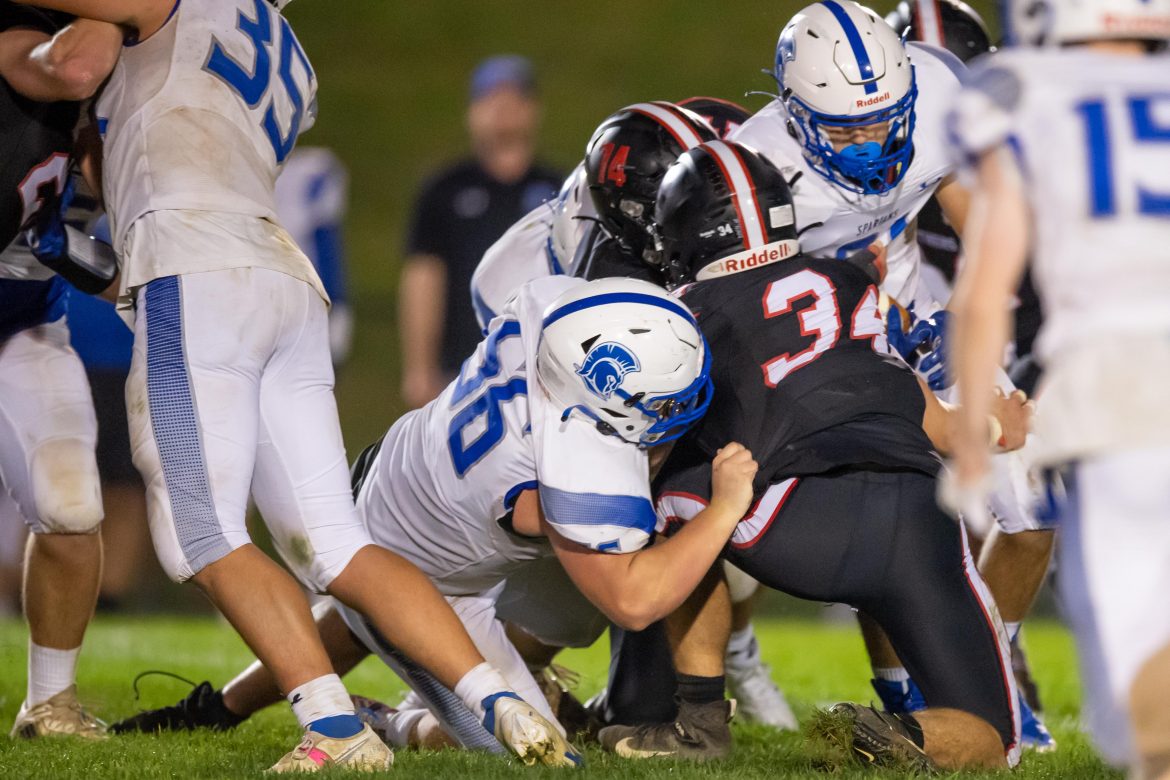 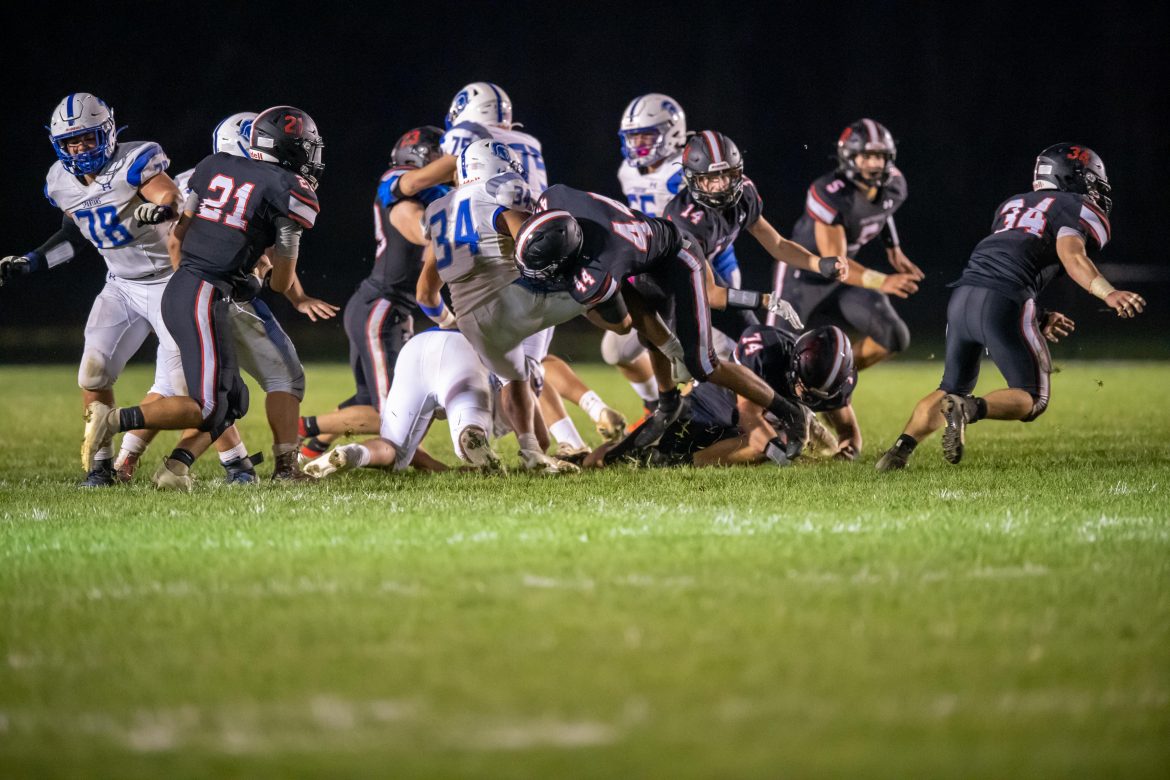 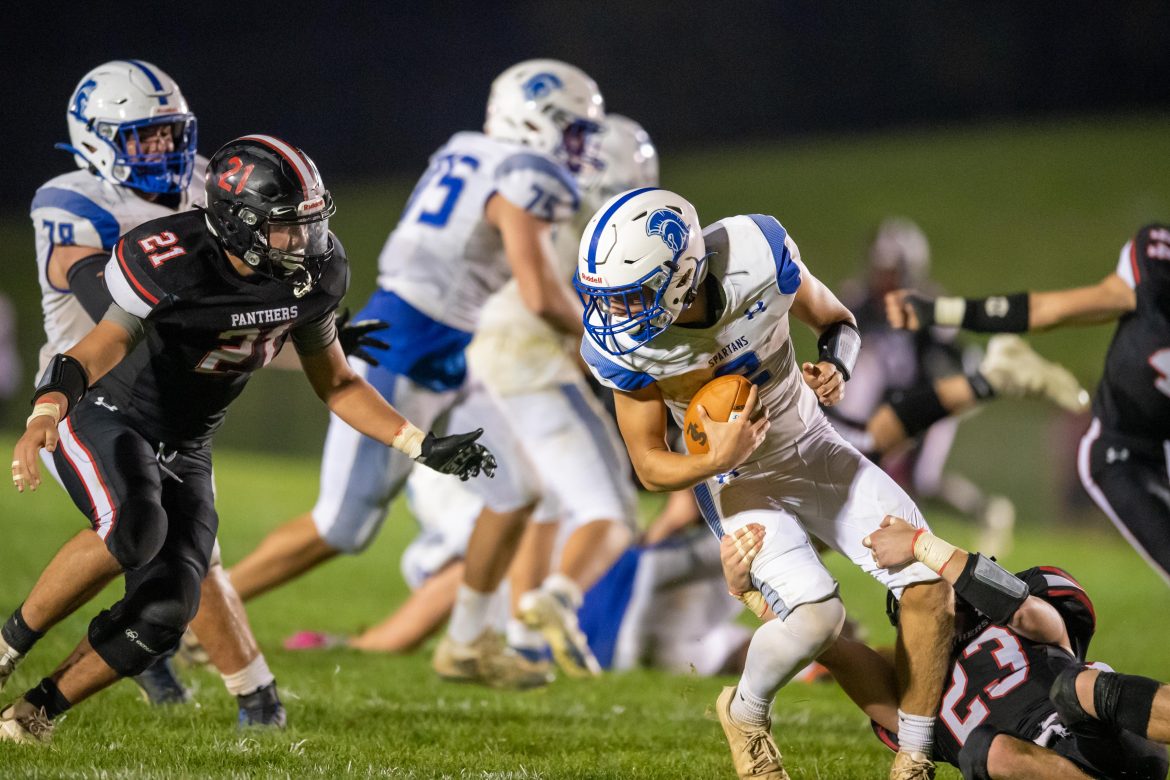 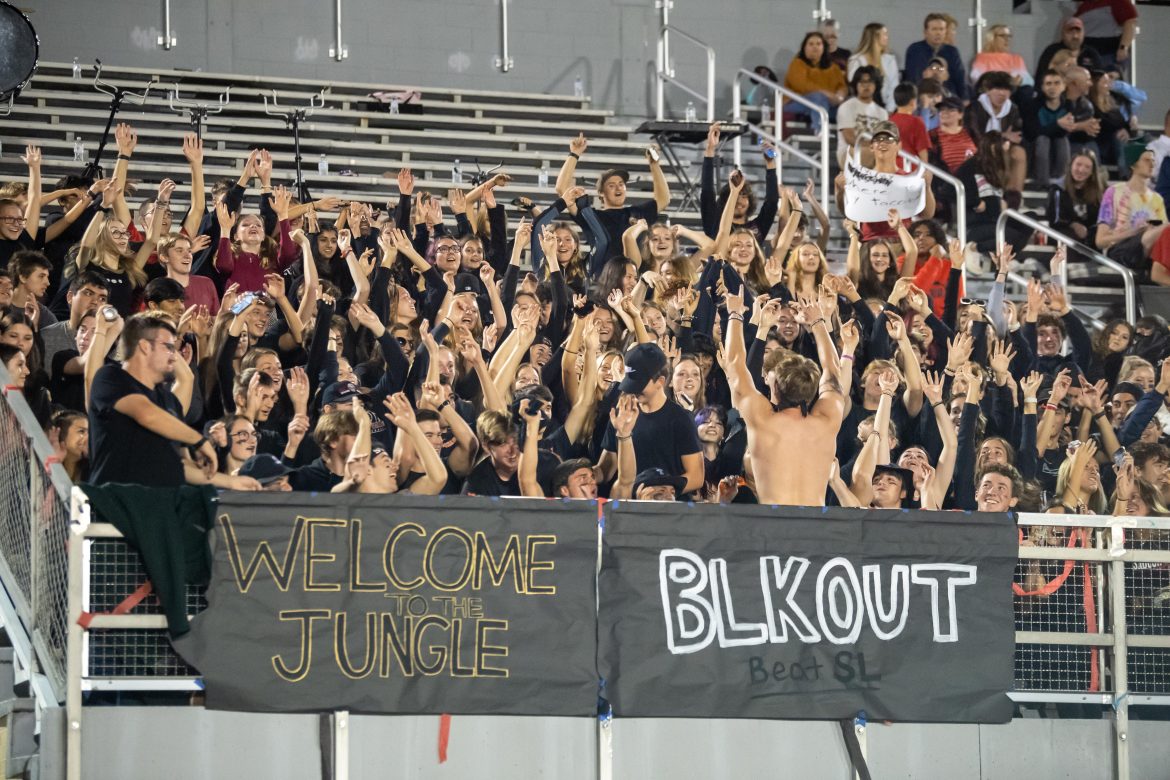 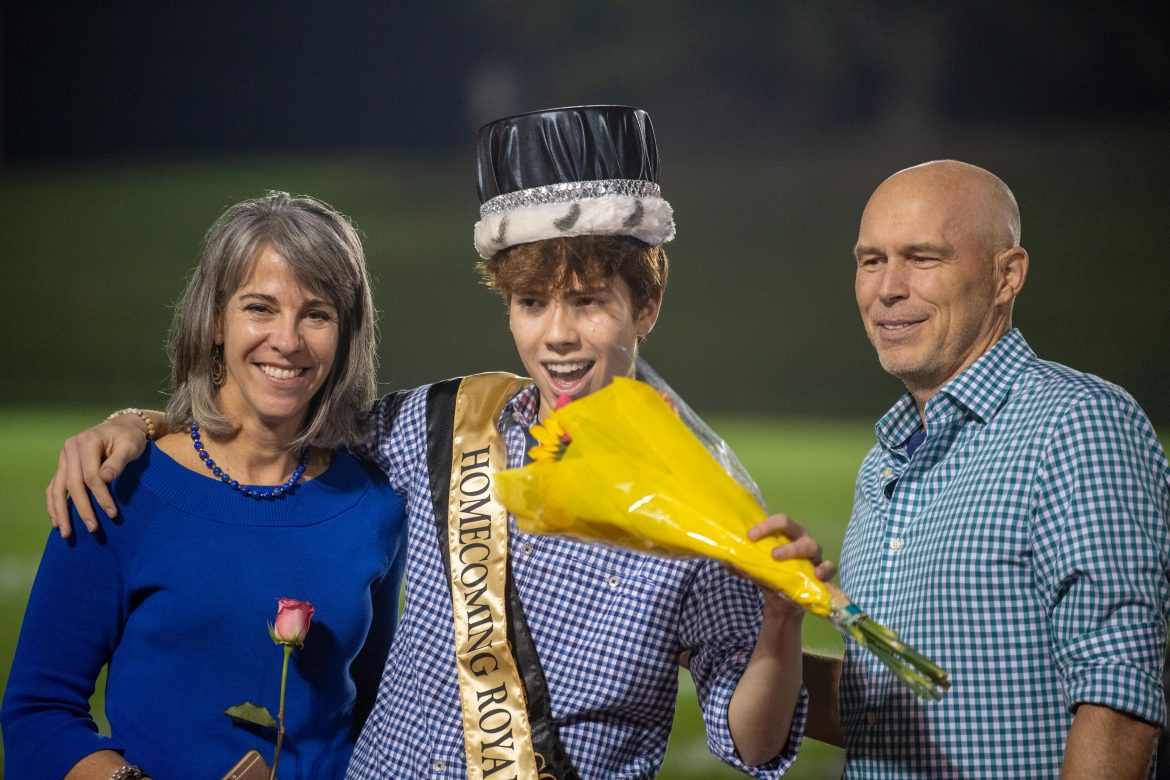 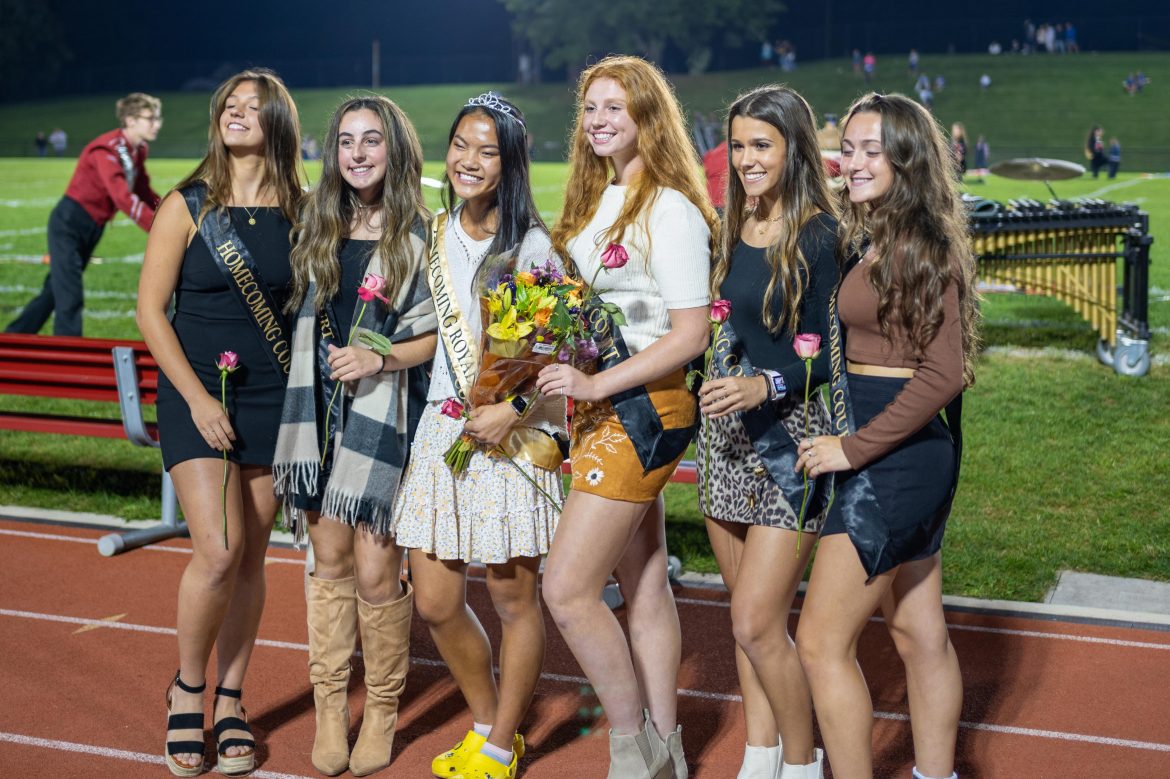 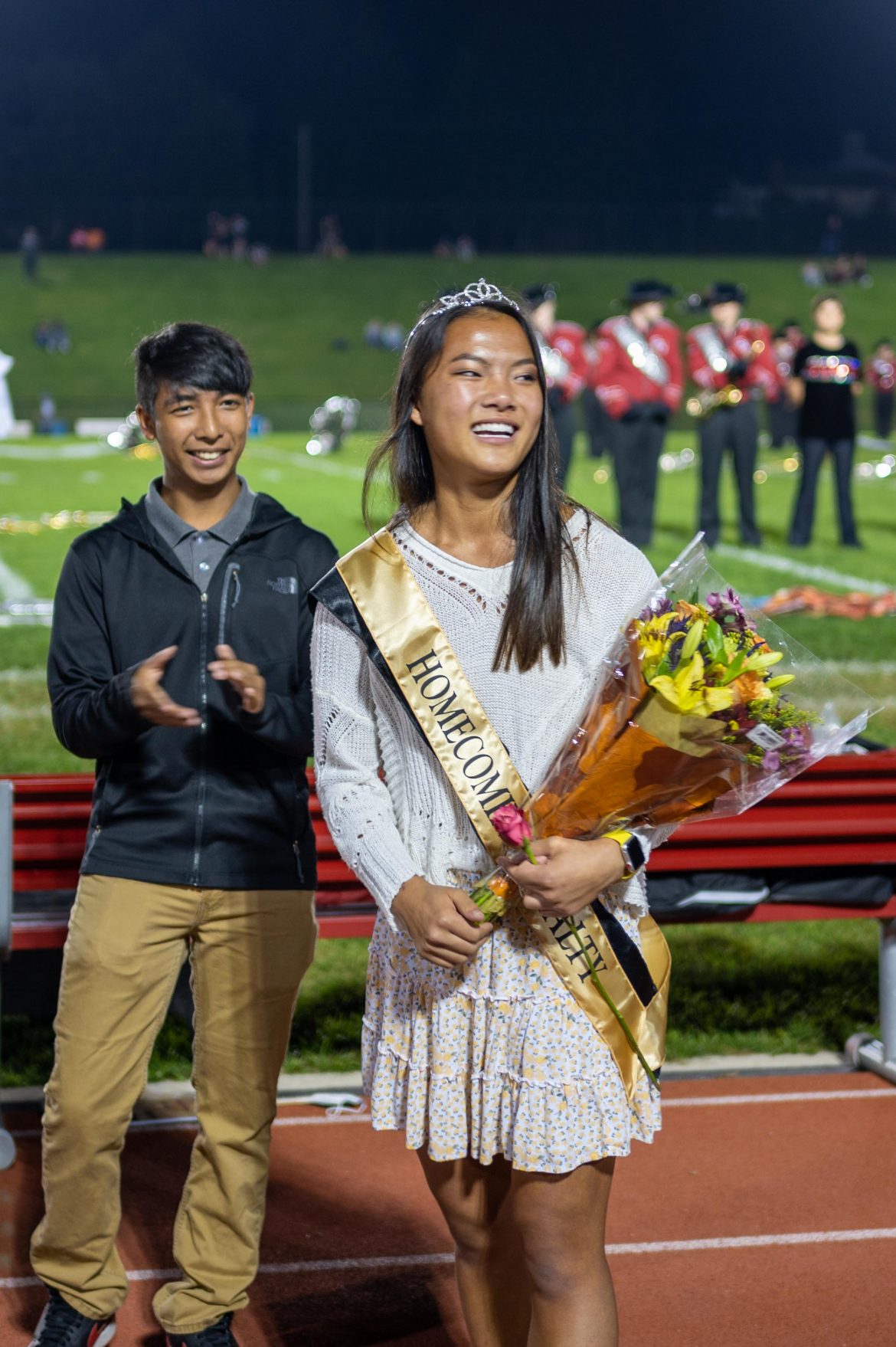