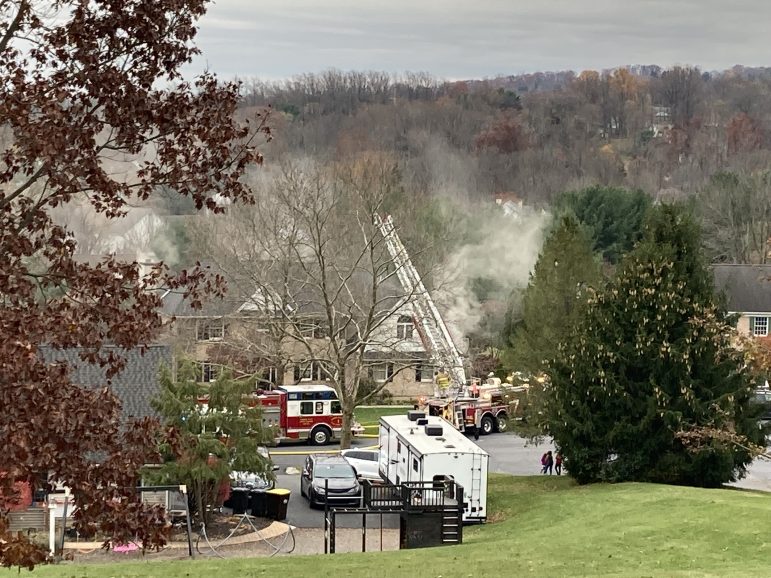 A house fire in the 6000 block of Domarray Street in Upper Saucon Township Sunday was extinguished by local volunteer firefighters. Pet dogs were rescued from the blaze, but no injuries to the other occupants of the home were reported. (Contributed Photo)

A fire that tore through a home in the 6000 block of Domarray Street in Upper Saucon Township Sunday afternoon appears to have caused extensive damage, but could have inflicted a more serious toll.

Volunteer firefighters who arrived at the scene of the blaze shortly around 2 p.m. didn’t have to rescue any people from the home, but did pull pet dogs from it, according to a report published by WFMZ News.

The TV news station reported that the dogs were administered oxygen at the scene, which is in a residential neighborhood off Blue Church Road, about a mile west of Coopersburg.

An eyewitness to what happened said he was watching television when he heard sirens, looked outside and was “surprised to see flashing lights at the bottom of the hill and smoke escaping from the garage of one our neighbors’ houses across the street.”

“There were never visible flames,” the witness added, “but at one point smoke was coming from both ends of the garage and our street filed with fire trucks and an ambulance from four or five firehouses.”

A number of other residents of the neighborhood gathered outside in the Domarray Street cul-de-sac as the fire rescue response was under way, the neighbor said.

The Morning Call reported that the dogs who were rescued are golden retrievers named Bailey and Bo who were transported to an emergency veterinary clinic in Quakertown.

While the cause of the blaze remains under investgation, an initial inspection determined that its source may have been electrical, the newspaper quoted the homeowner as saying.