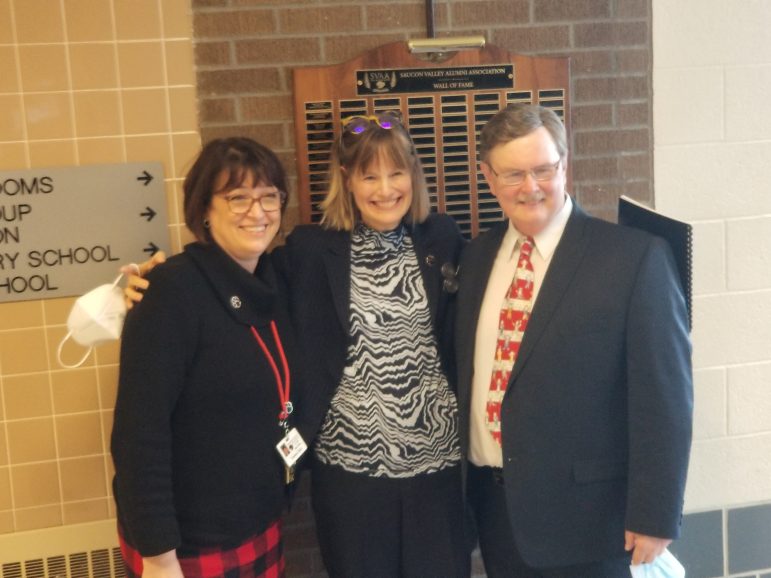 Saucon Valley graduate Jane Werner, Class of 1977, is congratulated on her induction into the school’s alumni Wall of Fame by Saucon Valley High School Principal Tamara Gary (left) and former teacher Barry Buckman, who recalled Werner as a “special” student during remarks at a ceremony hosted by the Saucon Valley Alumni Association at the school Nov. 16.

An accomplished member of Saucon Valley High School’s Class of 1977 had her name added to the Alumni Association’s Wall of Fame during an induction ceremony Nov. 16.

Jane Werner is the executive director of the Children’s Museum of Pittsburgh; an esteemed cultural institution that welcomes hundreds of thousands of visitors annually.

Her induction into the Wall of Fame also made her the first person to graduate from Saucon Valley High School–which opened in 1971–to join that elite group, association president Ken Bloss noted. All of the prior inductees graduated from either Hellertown High School or Hellertown-Lower Saucon High School, which became Saucon Valley.

Werner is also the first graduate from the 1970s to see her name added to the Wall of Fame plaque, and to date is the youngest person to be added to it.

Six years after the Wall of Fame was created, the Saucon Valley Alumni Association is more committed than ever to recognizing the achievements of the school’s graduates, Bloss said, adding that “there are a lot of Janes out there.”

Attendees at the ceremony–who included former classmates as well as a former teacher of Werner’s–were given insight into how she views the role of museums by watching a 2019 Tedx talk she gave, “Museums Can Be a Lab for Children’s Learning.”

In it, Werner recalls visiting Philadelphia’s Franklin Institute as a Saucon Valley sixth-grader and the impact that museum’s hands-on approach to learning had on her.

Just like scientists, “children…are always questioning their model of the world,” she said.

In overseeing the Children’s Museum of Pittsburgh, her goal has been to design spaces in which children feel free to do that.

The museum and its associated Laboratory of Learning give kids permission to be creative, be curious and be joyful; something Werner said the best teachers do, but which all educators need to get behind.

“Somehow we’ve taken the joy out of learning,” she said in her Tedx talk. “Isn’t that sad?”

Although her work is done outside of a classroom, Werner herself is undoubtedly a teacher, alumni association Wall of Fame committe chair Ron Reichard said at the ceremony held to honor her.

Her former teacher Barry Buckman, who taught Werner math in 1975-76, recalled that as a student “she took her education seriously.” 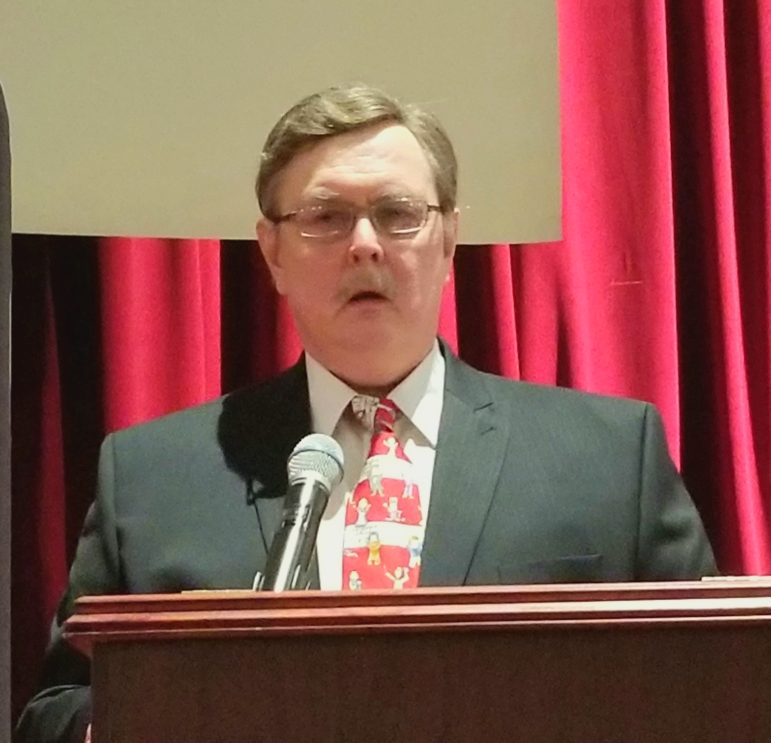 Jane Werner’s former teacher, Barry Buckman, recalled her as being a student who stood out from the crowd for all of the right reasons. Buckman taught Werner in 1975-76, early in his 30-year teaching career in the Saucon Valley School District.

“Jane Werner was and is one of those special people for whom acknowledgment and accomplishment were never in doubt,” Buckman said.

Werner was joined at the ceremony by close family members, including her life partner, her brother and her mother, who graduated from Hellertown High School in 1942.

“Thank you very much. I really appreciate this award more than you know,” she said in accepting it from the alumni association.

One of her mentors, she said, was the late Fred Rogers, of Mr. Rogers fame, who she quoted in conclusion: “Just be kind and brave. That’s all you ever need to be.”

For more information about the Saucon Valley Alumni Association and the Wall of Fame, as well as ways to support the organization, visit S auconValleyAlumni.org. 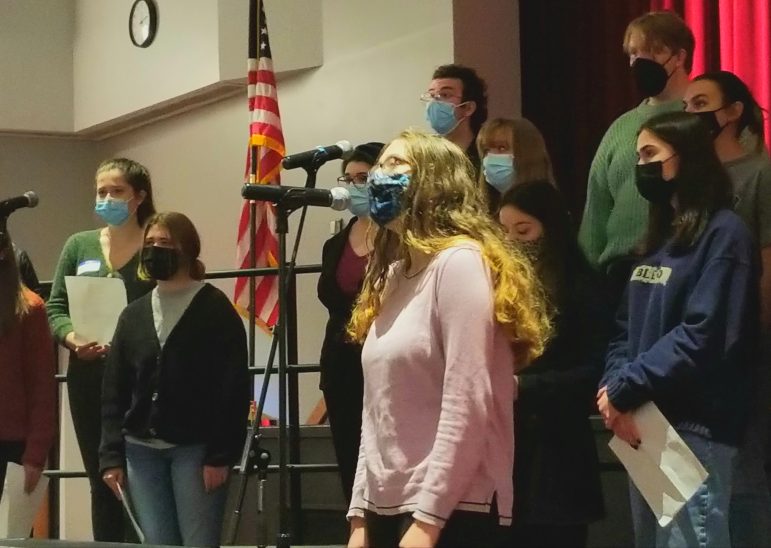 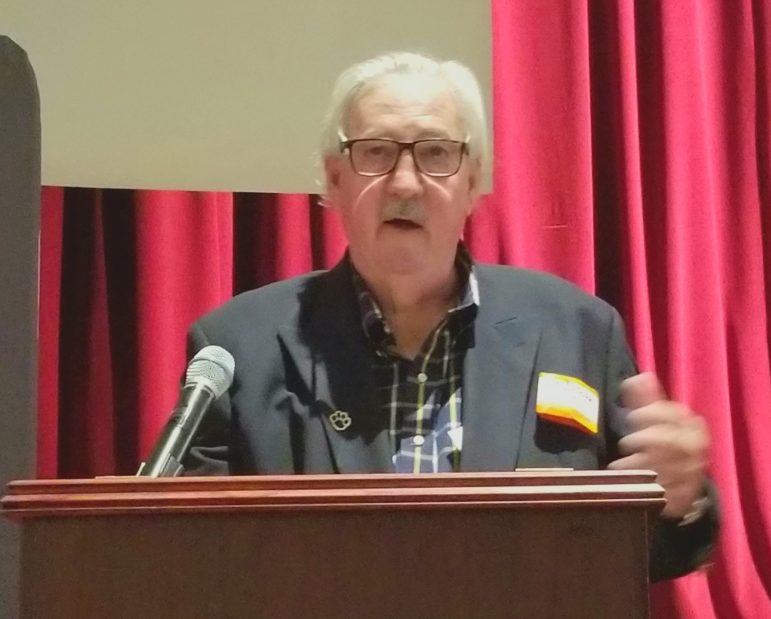 Saucon Valley Alumni Association president Ken Bloss speaks at the induction ceremony. “There are lots more Janes out there,” he said, and the association is looking forward to recognizing them on its Wall of Fame in the years to come. 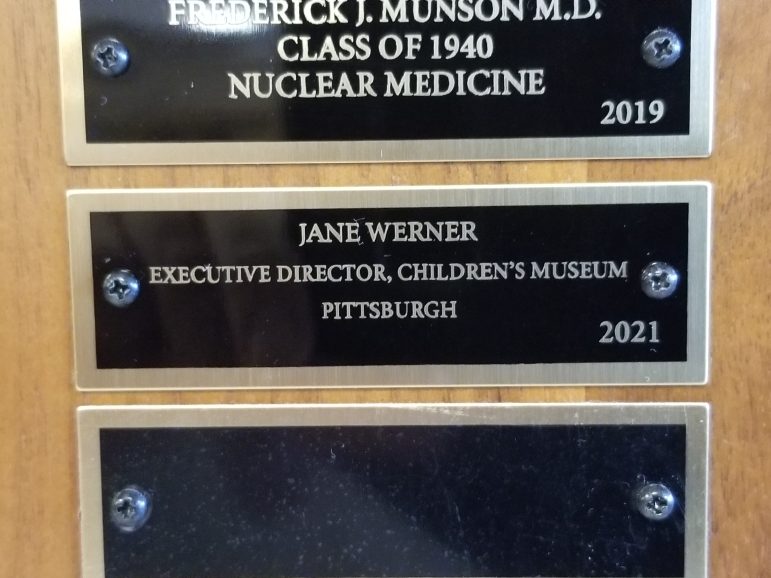 With the addition of her name to the Saucon Valley Alumni Association’s Wall of Fame plaque, Jane Werner, Class of 1977, became both the youngest member and the first graduate of Saucon Valley High School to be so recognized. Werner is the current executive director of the Children’s Museum of Pittsburgh, which welcomes more than 300,000 visitors per year. 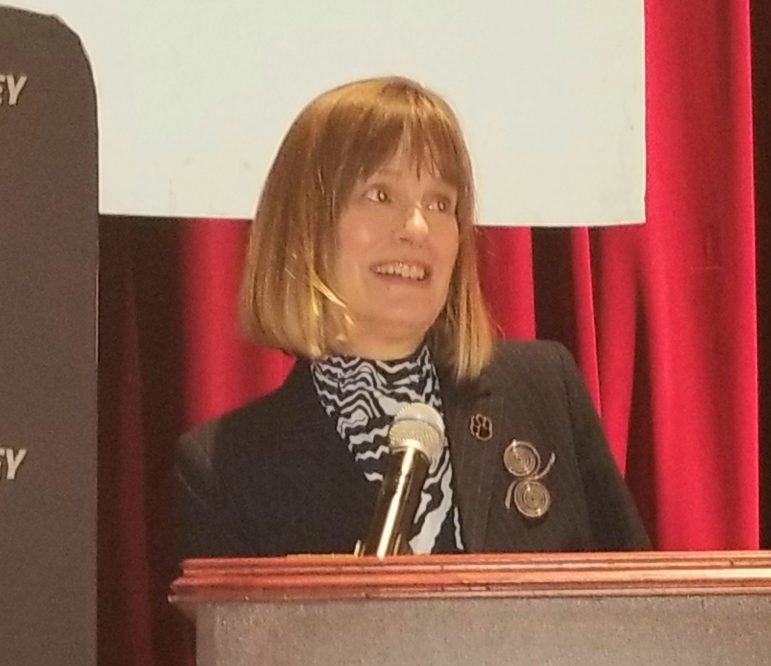 Children’s Museum of Pittsburgh Executive Director Jane Werner accepts a certificate recognizing her induction into the Saucon Valley Alumni Association’s Wall of Fame on Nov. 16. Werner quoted Mr. Rogers on the importance of being both kind and brave in her acceptance speech, which was followed by the unveiling of her nameplate on the Wall of Fame plaque. 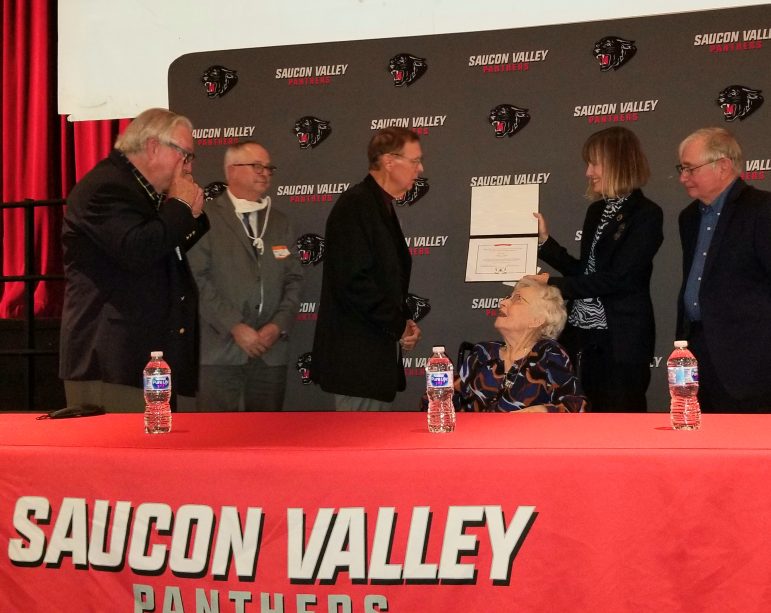 Saucon Valley graduate Jane Werner, Class of 1977, is presented with a certificate recognizing her induction into the alumni association’s Wall of Fame Nov. 16. Werner–who is Executive Director of the Children’s Museum of Pittsburgh–was joined by close family members and friends for the ceremony, which was held in the Saucon Valley High School auditorium. It was followed by the unveiling of her name on the Wall of Fame plaque, which hangs in the high school, and then a luncheon. 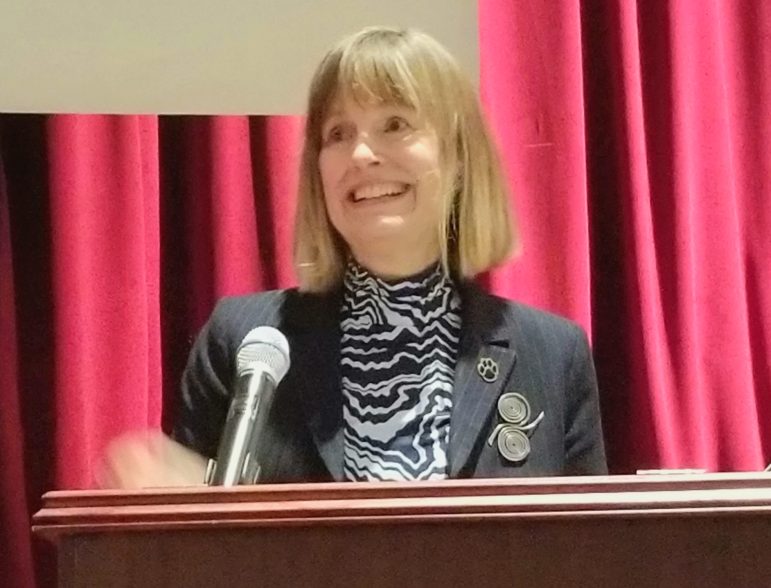 Jane Werner, Saucon Valley High School Class of 1977, has been recognized for her leadership and innovation as executive director of the Children’s Museum of Pittsburgh. She recalled being enthralled by a new type of museum experience when she visited Philadelphia’s Franklin Institute as a Saucon Valley sixth-grader. Years later, she herself would work there. 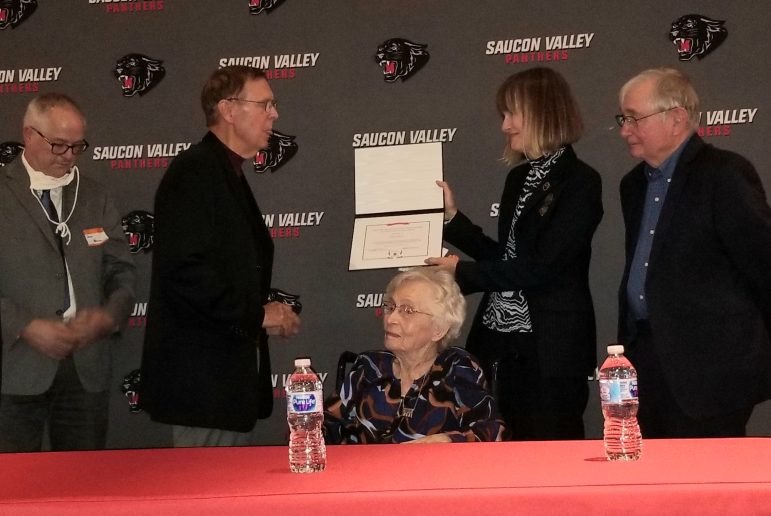 Werner accepts a certificate recognizing her induction into the Saucon Valley Alumni Association’s Wall of Fame from the association’s Ron Reichard during a ceremony held at the high school Nov. 16. Werner was joined at the ceremony by her life partner, brother and mother, who graduated from Hellertown High School in 1942, as well as former classmates and friends. 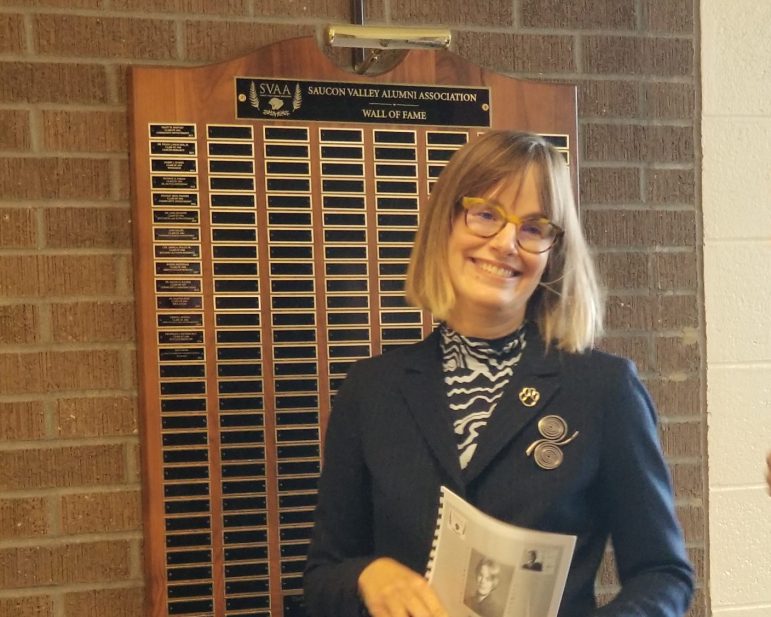 Wall of Fame inductee Jane Werner, Saucon Valley High School Class of 1977, stands in front of the Alumni Association plaque that now bears her name along with those of a handful of other graduates who have been added to it since 2015.