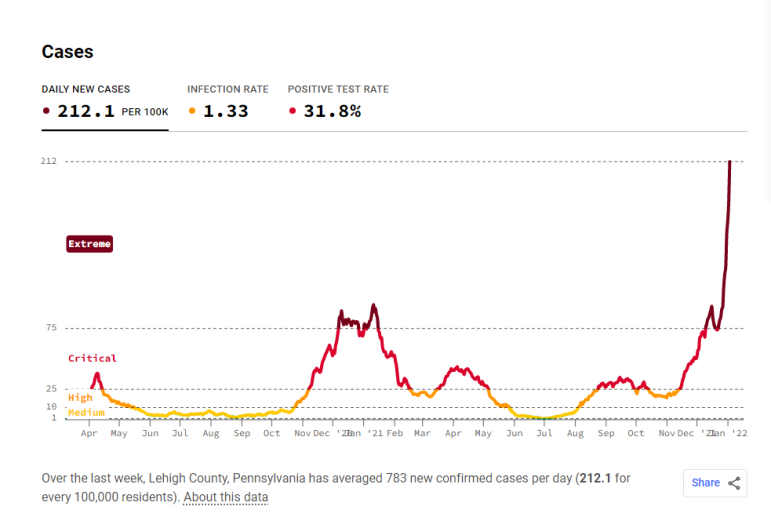 A screenshot of a chart published on the website CovidActNow.org shows the sharp spike in new cases that began in Lehigh County in late December 2021. Northampton County is seeing a similar surge in new cases, along with many other counties in Pennsylvania and around the United States. The surge is being driven in part by the omicron variant and holiday travel.

The post-holiday surge in COVID cases many public health experts feared appears to be in full swing in places like Lehigh County, which reported a new daily case record Tuesday.

According to the latest case trend chart on CovidActNow.org, the county confirmed 1,147 new cases of COVID on Jan. 3, which is about a hundred more than it confirmed Dec. 31.

That day the county surprassed 1,000 new cases in a single day for the first time, with 1,065 reported.

With many people returning to school and work this week after traveling and gathering with family and friends over the Christmas-New Year’s period, experts say it is likely that case numbers will continue to climb, at least during the near term.

The record case numbers are also being driven by the predominance of the Omicron variant of COVID-19, which emerged in late November to become the dominant variant in the U.S. and around the globe by New Year’s Eve.

Vaccine hesitancy also continues to contribute to the high case numbers in the United States, where even states with relatively high vaccination rates–such as Pennsylvania, in which more than 78 percent of the eligible population has received at least one vaccine dose–are among the worst-affected by the current surge in cases.

High caseloads are now impacting the economy by threatening the supply of basic infrastructure like transportation. For example, the Lehigh and Northampton Transportation Authority (LANTA) was forced to cancel some of the bus trips on its routes Monday and Tuesday due to COVID-related call-outs by drivers. And they have the potential to affect schools, most of which just reopened following a 10-day break.

The situation in terms of new cases in Northampton County is much the same as it is in Lehigh, with a record number of new cases (1,046) reported on New Year’s Eve.

Out of Pennsylvania’s 67 counties, Northampton County currently has the second highest per-capita case rate and Lehigh County has the third highest. Both counties’ risk levels are classified as “Severe” due to their new case numbers and other factors, such as positive test rate, which is the percentage of COVID tests that come back positive.

Northampton County’s positive test rate is currently 32.8 percent, which is nearly as high as it was during the earliest days of the pandemic in April 2020, when less testing was available.

Due to the high transmissability of the Omicron variant many stores have sold out of home testing supplies for COVID-19, and local health care providers such as St. Luke’s University Health Network have reported long lines at testing sites.

For more information about COVID-19 testing and vaccination, visit CovidActNow.org, the Pennsylvania Department of Health website and the Centers for Disease Control site.