It wasn’t on the agenda for Monday night’s Lower Saucon Township Council meeting, but about a dozen residents were so concerned following a recent discussion about a proposed five-year agreement with the Hellertown Area Library that they confronted council members with the issue and implored them to continue funding the library.

The library discussion occurred at council’s Dec. 1 meeting, when the agreement was tabled after council members expressed concerns about a lack of communication between council, their solicitor and the library’s board of trustees, among other things.

> >To read about the library discussion that took place in December, refer to pp. 11-20 of the Dec. 1 draft meeting minutes, which are available on the township’s website.

Council president Jason Banonis told the concerned citizens Monday that no decision about funding the library has been made either way, and that council’s solicitor is in ongoing talks with the library’s attorney regarding the roughly $500,000, five-year agreement.

“We anticipate that the library will be on the agenda at the Jan. 19 meeting,” Banonis said.

That wasn’t enough, however, to stop a parade of library supporters from approaching the lectern during an opportunity for residents to speak about non-agenda items.

“I use that library a lot,” said Stephen Harvilla, who suggested that council survey township residents to get a better idea of how many support the library.

“Really, seriously think about this at night when you go to bed,” he told them. “I’m outraged about this, too, and I’m trying to remain calm.” 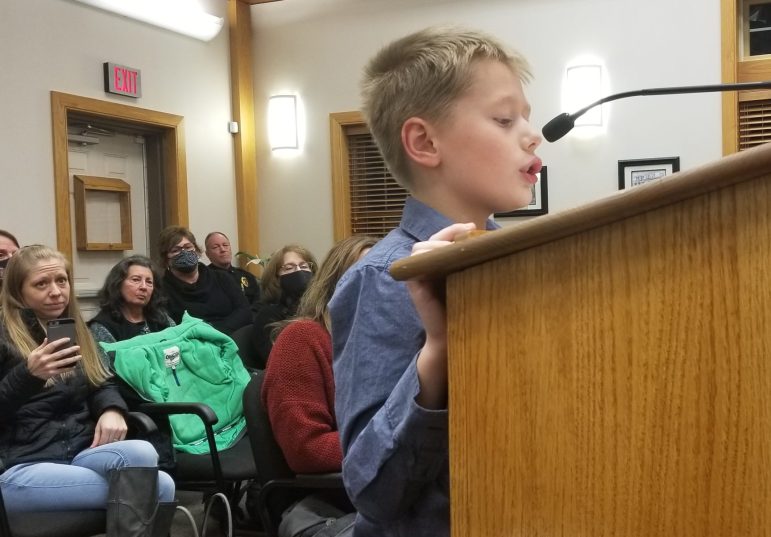 Second-grader Lincoln Haupt told Lower Saucon Township Council Monday that he supports the Hellertown Area Library and hopes they will, too. “I made most of my first friends at the library,” he said. “I wish all the kids in my school could have been brought to (children’s librarian) Miss Andrea’s (Milliren’s) programs.” In response to questions over future township financial support for the library, he said “we need to find ways to get more people to these programs–not cut the programs.”

One of the youngest voices to be heard–but perhaps one of the most effective–belonged to second-grader Lincoln Haupt, who struggled to reach the microphone on the lectern.

He proudly announced that he was already a regular HAL patron when he entered kindergarten two years ago.

“I am here tonight to ask you to continue to fund the Hellertown library,” Lincoln said. “We need to find ways to get more people to these programs–not cut the programs.”

Briana Rich–who said her homeschooled children not only benefit from the library’s educational resources, but also from its programs and the opportunities for socialization they provide–told council of a petition to continue funding the library she began after learning about the earlier discussion. To date, the Change.org petition “Lower Saucon Township to Fund Hellertown Area Library” has received nearly 650 signatures.

“In a world full of cancel culture and defund movements, Lower Saucon is choosing to defund the library,” she said. Rich asserted that the per-capita cost to township residents of the agreement with the Hellertown Area Library is about half of what it would cost if the township chose to enter into an agreement with the Bethlehem Area Public Library.

Lower Saucon Township was formerly a part of the BAPL system, but left it to join the HAL about eight years ago, following more than a year of sometimes contentious debate between residents who wanted the convenience of a library closer to home and those who felt the resource-rich Bethlehem library system provided better value.

Rich, along with a number of other speakers, praised the family services the Hellertown Area Library provides, which include services for children and seniors.

Robin Socha said children’s librarian Andrea “Miss Andrea” Milliren has helped a grandchild with Asperger’s syndrome “come out of it.”

And Margaret Tomic called the library “small in size, but immense in heart.”

She noted that its location near the Saucon Valley School District campus “gives kids and teens of all economic levels a place they can easily walk to after school.”

“I’m very upset about the library,” said Carol Auernheimer, who identified herself as a member of the local Woman’s Club, which she said was instrumental in the library’s formation nearly 30 years ago. The club still holds meetings at the library and continues to help raise money for it, she told council.

Auernheimer also called a new agenda policy and code of conduct for council meetings which council later adopted–and which has the potential to limit who can speak during future meeting discussions about the library–“ludicrous.”

“I am very upset that instead of putting our energy toward improving the library, going forward with programs that the Friends (of the Hellertown Area Library) are trying to accomplish, that we’re fighting for funding,” Jessica King told council Monday. “That feels completely absurd.”

> >Click here to read a letter from Friends of the Hellertown Area Library President Larry O’Donnell about the funding decision Lower Saucon Township is contemplating.

King, who is vice president of the volunteer Friends organization and identified herself as “the one who does all the raffles,” asked council members to “please, really think long and hard about what you’re considering.”

Because council tabled the library funding agreement Dec. 1 and the current agreement expired Dec. 31, concerns were expressed at that meeting that township residents might not be able to use the Hellertown Area Library–or any other public library–as of Jan. 1, due to a state regulation that stipulates that access to library services in other communities is dependent upon whether the municipality “supports a state-aided public library for its residents (as outlined in the Pennsylvania Public Library Code).”

King referenced the ACCESS program that allows residents of one community to utilize library services in another, as long as they have a home library their municipality funds.

With regard to that program, King told council, “the information that you’re sharing with us isn’t accurate.”

> >Do you value our reporting? Help keep our independent local news free for all! Show your support by becoming a Saucon Source member today!

She cited Freemansburg borough as an example of a municipality that doesn’t have a home library, which she said means that residents of Freemansburg must pay for an ACCESS card in order to use Pennsylvania libraries that are part of the program.

Diane Hollowell, who identified herself as the school libarian at Dieruff High School in Allentown, said when she blogged about the library funding discussion in Lower Saucon Township people asked her, “‘What kind of town do you live in?'”

“It was really hard to answer,” she said. “It’s just blowing my mind that you would not consider funding something like that.”

The next Lower Saucon Township Council meeting will be held Wednesday, Jan. 19 at 6:30 p.m. at Lower Saucon Town Hall, 3700 Old Philadelphia Pike, Bethlehem. Meeting agendas as per the new agenda policy will be available at least three days before the meeting commences, both on the township’s website and at the township building.