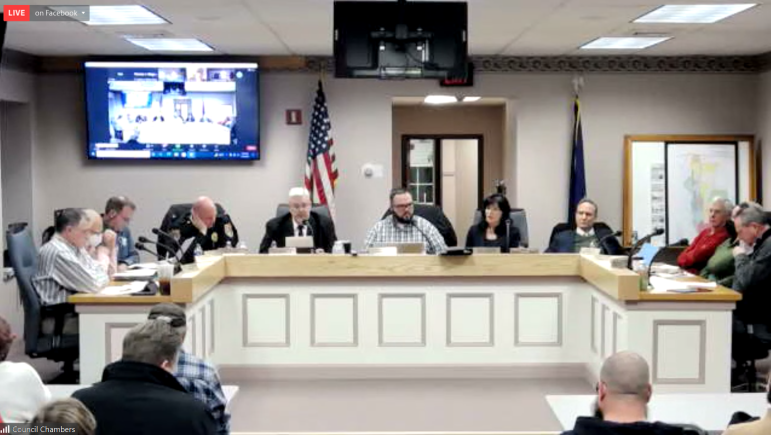 Hellertown Borough Council held a special meeting Wednesday night to discuss its agreement with the Hellertown Area Library, in the wake of Lower Saucon Township Council’s decision to reject a new five-year agreement to which the borough was already a party. Borough council voted unanimously to authorize staff to work on a new agreement that will be solely between the borough and the Hellertown Area Library, with the expectation that it will be in place by Feb. 1. Provisions for children and veterans from Lower Saucon Township to continue receiving access to library services were also discussed.

One of the largest turnouts by residents in recent years was at a special Hellertown Borough Council meeting about the future of the Hellertown Area Library Wednesday night.

The meeting was held both in-person and virtually on Zoom and the borough’s Facebook page, with more than 250 people in attendance at Borough Hall and online, borough officials said.

More people may have attended via Zoom if they could have, however the borough has a plan that caps attendance at 100 participants on the popular online meeting platform.

The fact that the meeting was held interactively across multiple online platforms by itself served to draw a distinction between the borough and its larger neighbor, Lower Saucon Township, which was the subject of much of the discussion during the meeting.

Last year Lower Saucon Township Council members voted to obtain pricing for hosting council meetings online, but a discussion about the quotes that were being sought has yet to be held, and in the meantime several council meetings have drawn fairly large crowds.

Some of the biggest, most impassioned audiences have been at recent Lower Saucon Council meetings during which a proposed 5-year, $550,000 agreement with the Hellertown Area Library was under discussion, late last year and earlier this month.

At their meeting Jan. 19, Lower Saucon Council voted 4-1 to reject the agreement and instead make a one-time $50,000 donation to the library. Council also approved separate motions to donate $50,000 to the Southern Lehigh Public Library and to proactively authorize legal action against the Hellertown Area Library if it refuses to continue providing full access to township residents after the current agreement expires Jan. 31.

Although library officials have not publicly commented on what they plan to do after the current agreement with the township ends next week, the Hellertown Area Library Board of Trustees voted 5-1 to reject the $50,000 donation at a meeting held Tuesday night; an action Hellertown council president Tom Rieger called “commendable.”

Rieger and Hellertown Mayor David Heintzelman countered the library agreement negotiation timeline presented by Lower Saucon Township Council last week with their own timeline, which documented ongoing communication between library officials, borough officials and township officials, and included information in contradiction to claims by Lower Saucon councilors that they were left out of the loop during negotiations.

According to the borough’s timeline, among the township officials with whom there was regular communication about the agreement over the past eight months was township manager Leslie Huhn, who submitted her letter of resignation to council Wednesday.

“From our perspective, the story presented last week (by Lower Saucon Council) differs from the timeline presented here tonight,” said Rieger in a prepared statement he read at the start of the meeting. “At no time during this period did we receive identified issues from Lower Saucon Township Council with the current or proposed agreements.”

“Hellertown Borough Council was kept abreast of all happenings in 2020 and 2021 by both our Borough Manager, our appointed board members and Council Liaison to the Library Board,” he said. “We received the same draft proposals, at the same time Lower Saucon Township did through this entire process.”

Rieger also made clear the fact that the once-collaborative relationship between the borough and the township is now in jeopardy, because of “damaging actions and comments by Lower Saucon Township Council towards Hellertown Borough.”

“These actions have truly fractured beyond immediate repair the once close relationship we shared,” he said. “It is my opinion that our community vision is no longer shared with Lower Saucon Township Council and that must be addressed. I believe the time has come to re-examine every joint project, committee, organization and intermunicipal agreements we have with Lower Saucon Township.”

“We will try our very, very best to come to the plate, and…it takes two,” Heintzelman said.

Rieger agreed, stressing to meeting attendees that the borough has no say in decisions made by another municipality, regardless of shared geopolitical boundaries such as those of the Saucon Valley School District.

“We control our actions, and Lower Saucon controls theirs,” he said.

During a public comment period about the library and how the lack of an agreement could affect Lower Saucon Township residents–and particularly children–in the near future, numerous township residents expressed disappointment in their own elected officials, while praising the Hellertown Area Library and the borough.

“I don’t carry my Visa. I carry my library card with me at all times,” said Lower Saucon resident Judy Malitsch, who told council she’s a kind of local library connoisseur–having patronized them from Lower Macungie Township to Bethlehem–and that the others she has visited “can’t hold a candle” to what the Hellertown library provides its patrons.

Malitsch, a grandmother, said she was “deeply saddened and disgusted” by Lower Saucon Township Council’s rejection of the library agreement, and particularly the timing of the decision, coming after two years when “children have lost so much during the pandemic.”

Malitsch also said she would be “willing to pay a fee” to use the Hellertown Area Library, if necessary.

Lower Saucon resident, Saucon Valley High School student and teen liaison to the Hellertown Area Library Board of Trustees Shanti Saj spoke in support of the library at Wednesday’s Hellertown Borough Council meeting. Saj said that when she moved to the Saucon Valley the library was where she made some of her first friends. She estimated that over the summer she visited it “maybe 100 times” and urged continued support for the library because of the important role it plays in encouraging young people to read.

“I’ve received many, many emails from residents (about the library),” said Lower Saucon Township councilwoman Priscilla deLeon, who was the only township council member to support signing the new library agreement and the only member present at Wednesday night’s Hellertown council meeting.

A council member for more than 30 years, deLeon said that when she was first elected to office in the late 1980s, the township and the borough “weren’t talking to each other.” Yet the current library agreement furor in the township “is probably the most awful thing that’s happened to us,” she continued, “and it saddens me.”

Former township councilwoman and council liaison to the Hellertown library board Kristen Stauffer said “depriving Lower Saucon residents of library services is not a rational decision.”

Although she was not closely involved in the library agreement negotiations, Stauffer said the timeline presented by borough council sounded “accurate.”

Hellertown American Legion Post 397 Commander Eric Medei told borough council members that he has been approached by veterans who live in Lower Saucon Township and fear losing access to the library not only for themselves, but also for their families.

Another resident of the township who said he’s lived and worked in both municipalities, Barrett Geyer, struck a more optimistic tone, urging residents to summon the community spirit that has helped build numerous shared amenities, an educational system and more.

“We have been a combined community–a shared community–for generations,” said Geyer. “I know everyone is upset at Lower Saucon Township right now…but the residents will take action and correct this problem.”

“We will rally. The library will be preserved,” he predicted.

“I am dedicated to finding a path forward for (the library) to remain a community resource,” said Hellertown councilwoman Terri Fadem, during a council discussion that followed the roughly hour-long public comment period.

Councilman Earl Hill added that maintaining access for children in the township is a “must.”

“No matter what we do, this community will come together and support the Hellertown Area Library,” Rieger said. “If we can set this aside and work together, the future will be bright.”

Council then unanimously approved a motion to authorize borough staff to draft a new agreement solely between the Hellertown library board and the borough, to take effect by Feb. 1. The timing of that work will likely require another special meeting to be held by council in order to approve the agreement, which will replace the one it ratified late last year.

Rieger assured meeting attendees that once a draft agreement is ready, council will consider the provisions to provide library services to children and veterans who live in Lower Saucon Township that were favorably discussed Wednesday night.

Saucon Source will provide updates on the date and time of the next meeting on its Facebook page and in our free newsletter, which we encourage readers to subscribe to.