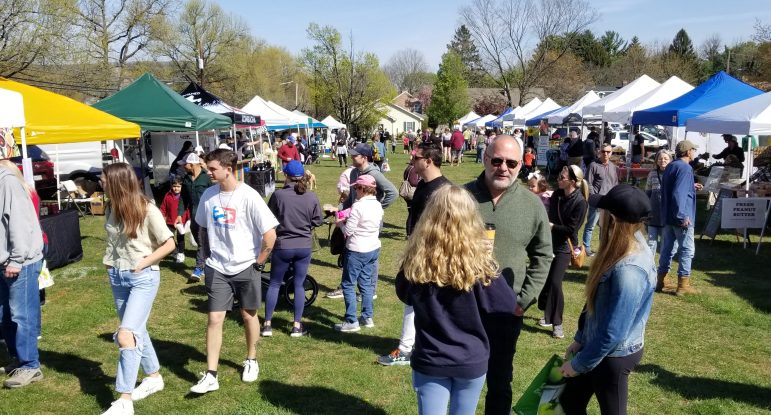 Business was brisk on the opening day of the 2022 Saucon Valley Farmers’ Market. The market is held from May through November. It is open Sundays from 9 a.m. to 1 p.m. next to the Hellertown Area Library, 409 Constitution Ave., Hellertown.

Sunny skies and smiles were what greeted visitors on the first day of the 2022 Saucon Valley Farmers’ Market in Hellertown Sunday.

The market kicked off its 17th season with more than 30 local vendors selling everything from kombucha to bread to flowers to farm-fresh produce, cheese, eggs and much more. 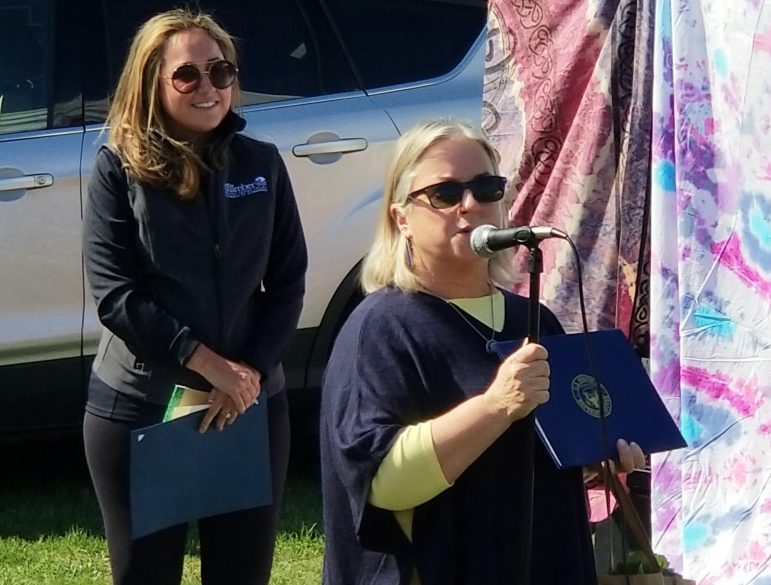 U.S. Rep. Susan Wild (D-7) was on hand to present a certificate of recognition to the Saucon Valley Farmers’ Market on opening day. The market has been an annual tradition in Hellertown since 2006, and hundreds of local shoppers returned Sunday to purchase locally-grown produce, prepared foods and other items. Wild was one of several elected officials who spoke at a ribbon-cutting hosted by the Hellertown-Lower Saucon Chamber of Commerce. Pictured at left, above, is Jessica O’Donnell of the Greater Lehigh Valley Chamber of Commerce. 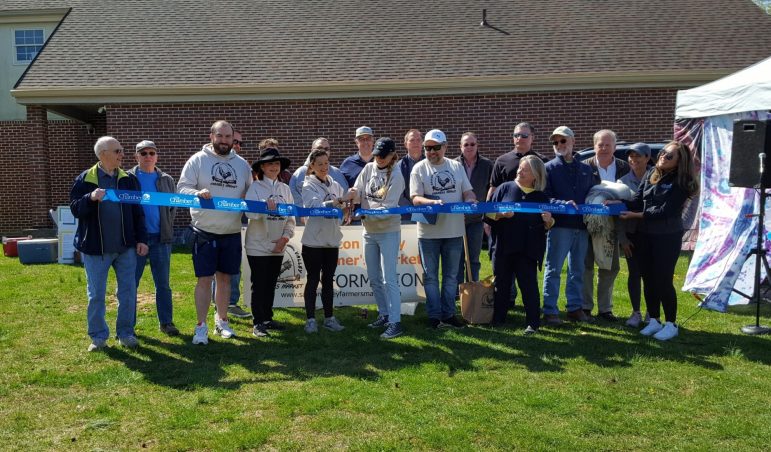 Saucon Valley Farmers’ Market board members, elected officials and others cut the ribbon to celebrate the opening of the 2022 market in Hellertown Sunday. The market has just begun its 17th season with more than 30 local vendors participating.

At 10 a.m., a ribbon-cutting ceremony hosted by the Hellertown-Lower Saucon Chamber of Commerce was held to celebrate the beginning of the new season. Remarks were made by U.S. Rep. Susan Wild (D-7), state Rep. Bob Freeman (D-136), Mayor David Heintzelman and others who attended and helped the SVFM board cut the ribbon.

A highlight of the ceremony was the presentation of a custom-embroidered blanket to longtime market manager Terry Boos. Boos, of Hellertown, stepped down from that role before the start of the new season, but remains an active market volunteer.

As one of the original volunteers who helped found the market in 2006–when it was located in a downtown bank parking lot–Boos has witnessed many opening days, and he remarked that Sunday’s crowd was the largest he has ever seen. 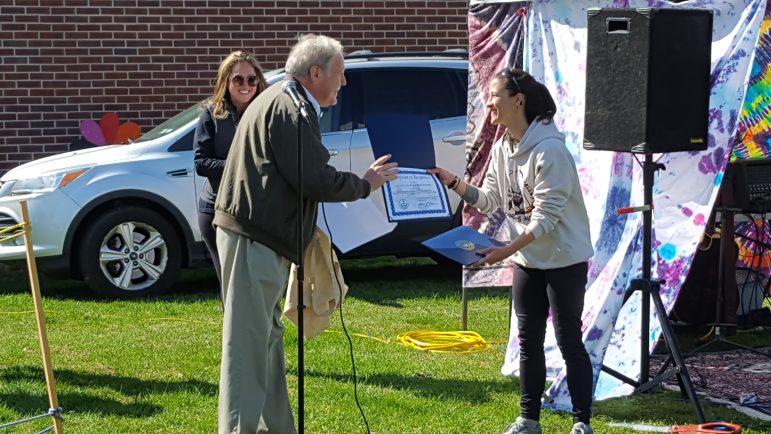 State Rep. Bob Freeman (D-136) presents a certificate from the state House of Representatives to Saucon Valley Farmers’ Market board member Maria Schaller during the opening day ceremony at the market Sunday. 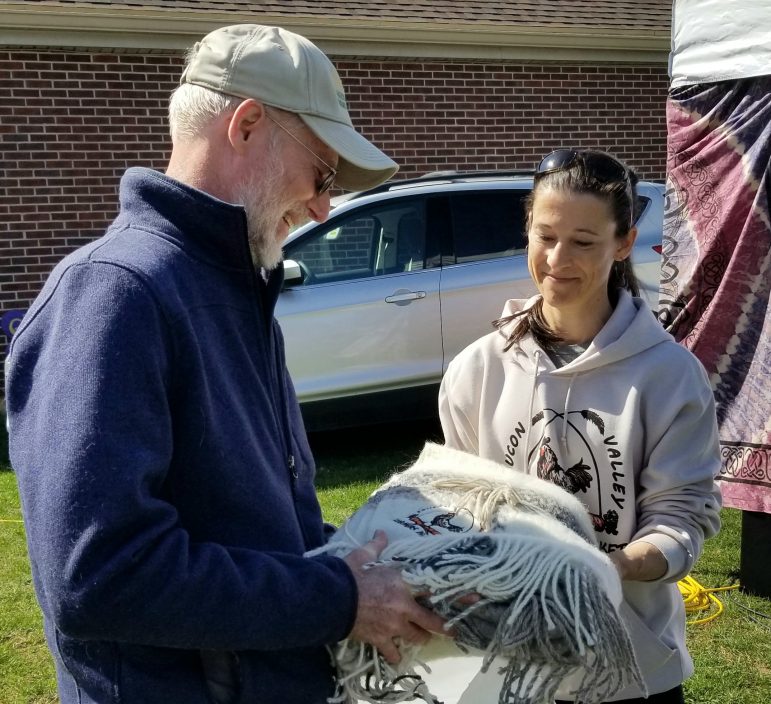 In honor of his dedication to the market’s operation, longtime Saucon Valley Farmers’ Market manager Terry Boos was presented with a custom-embroidered blanket by the SVFM board Sunday. Pictured above, presenting him with the blanket, is board member Maria Schaller. Although he recently stepped down from his role as manager, Boos plans to continue volunteering at the market. He remarked that Sunday’s turnout was the biggest he has seen since it began 16 years ago.

Some vendors ran low on or ran out of products due to the overwhelming turnout, but as several board members explained, it can be difficult to gauge what turnout will be like and a crowd as large as the one that came out Sunday is a “good problem” to have.

As part of the opening day festivities, market volunteers gave out reusable tote bags with the SVFM’s logo emblazoned on them to shoppers who stopped by the information booth. Since supplies of the free bags were depleted Sunday, there will be another round of free bags offered on Sunday, May 8, when the market will be open for Mother’s Day.

Sunday’s live musical performance was by local group Christine & Company. Each week throughout the season the market hosts a local performer. Next week’s will be Bill Ihling.

The market is also once again hosting its annual Sunflower Contest, sponsored by Lost River Caverns. Free seeds are available to any local residents who want to participate.

The 2022 Saucon Valley Farmers’ Market is open Sundays from 9 a.m. to 1 p.m. (rain or shine) through Nov. 20. It is located next to the Hellertown Area Library at 409 Constitution Ave., Hellertown, Pa., across the street from Dimmick Park. 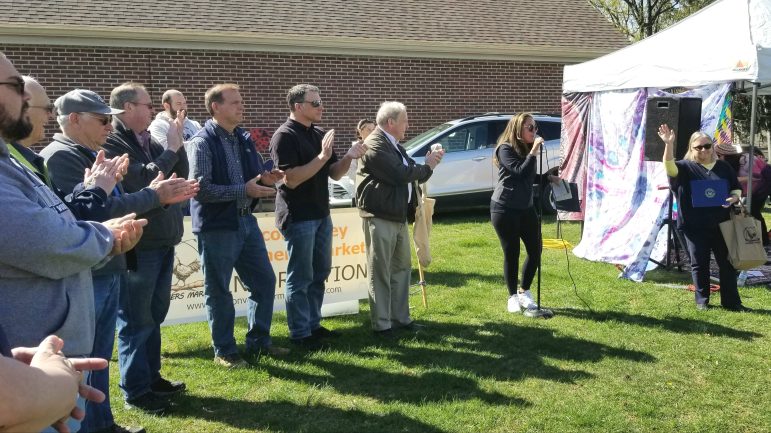 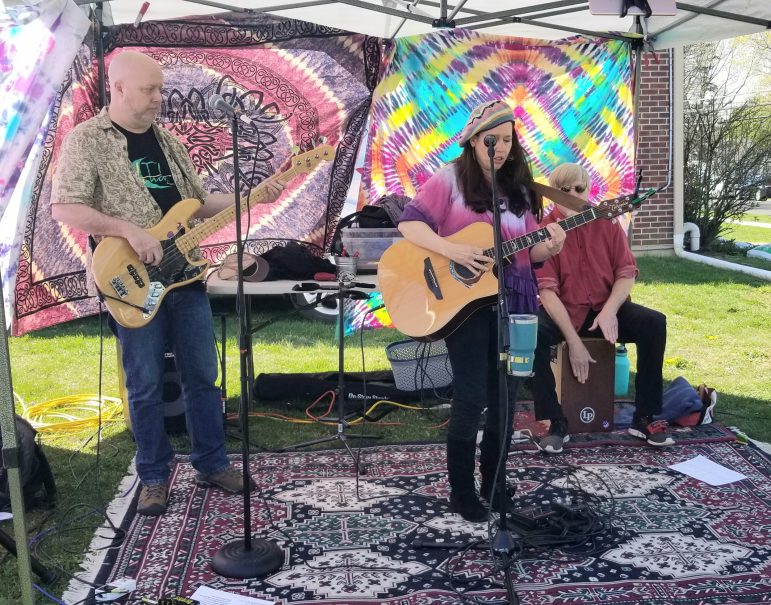 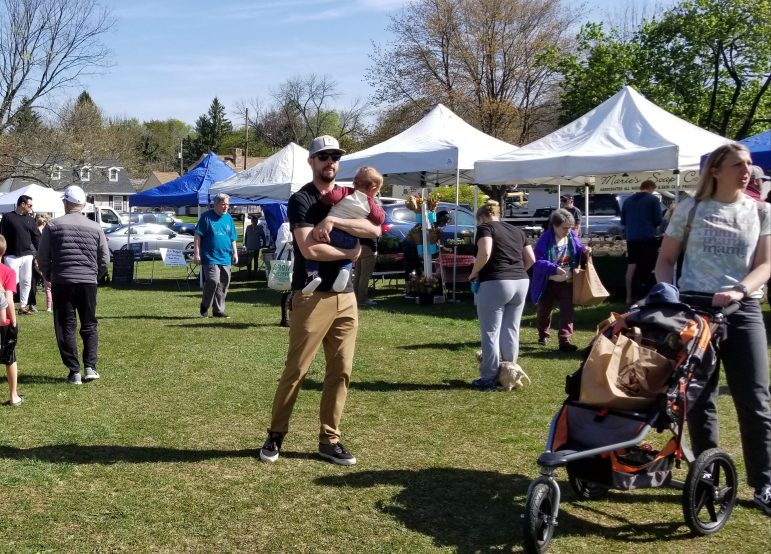 This year’s Saucon Valley Farmers’ Market opened with more than 30 vendors in place and several more who will be setting up shop in the weeks to come. Many families came with children. Well-behaved dogs are permitted on leashes at the SVFM. 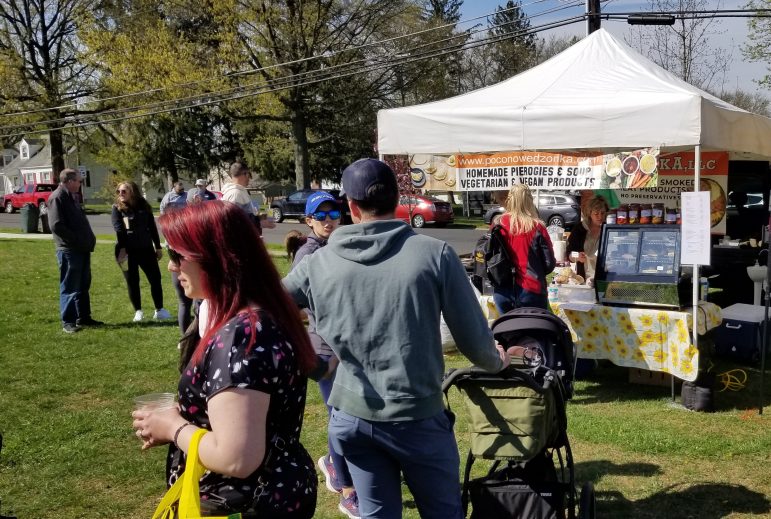 A line of hungry shoppers waits to order handmade pierogies and other Eastern European delicacies from Wedzonka LLC of Kunkletown. The Poconos-based business will be vending at the Saucon Valley Farmers’ Market through early summer. 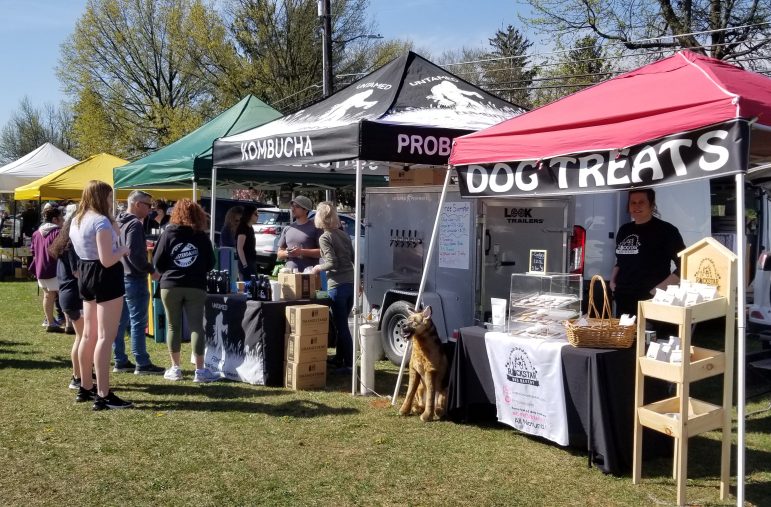 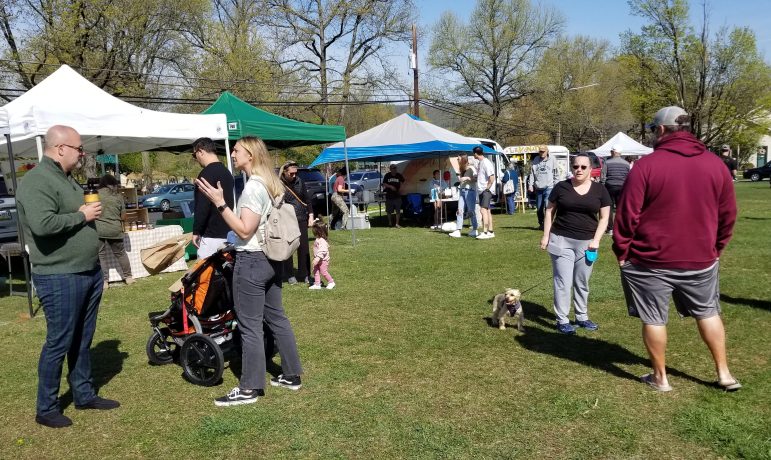 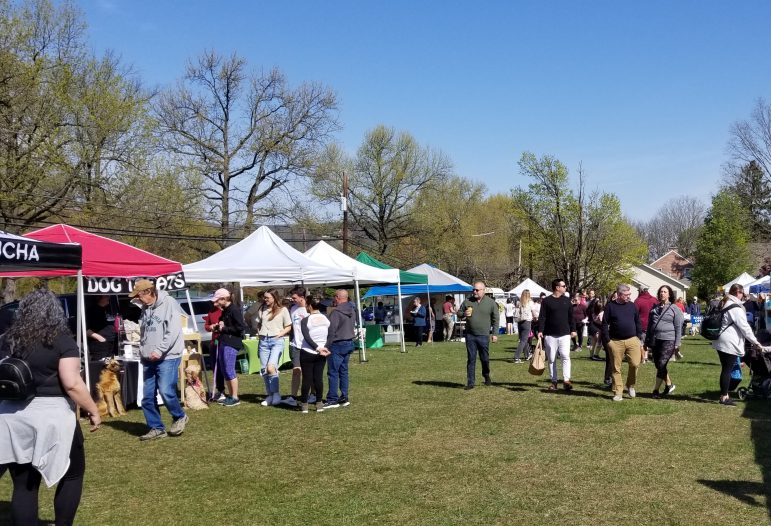 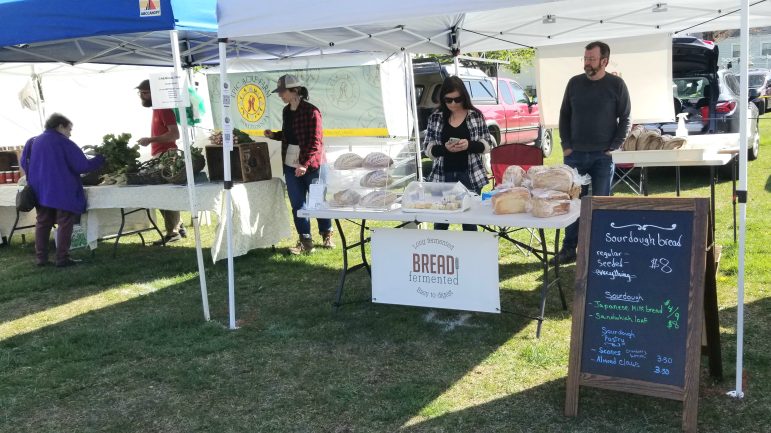 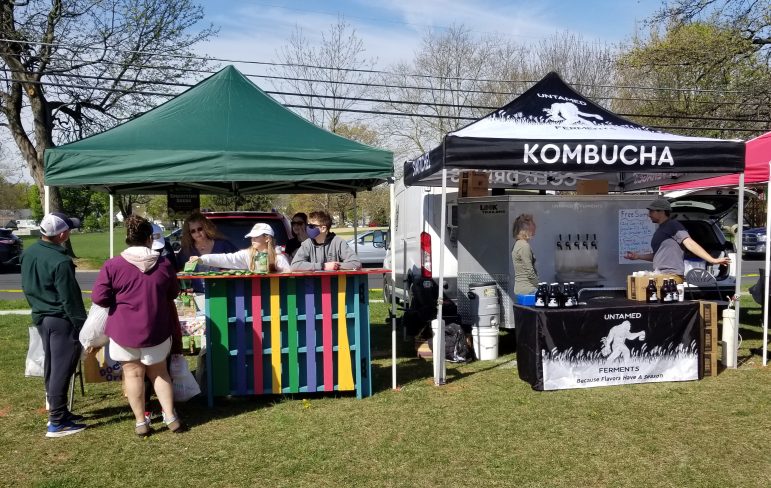