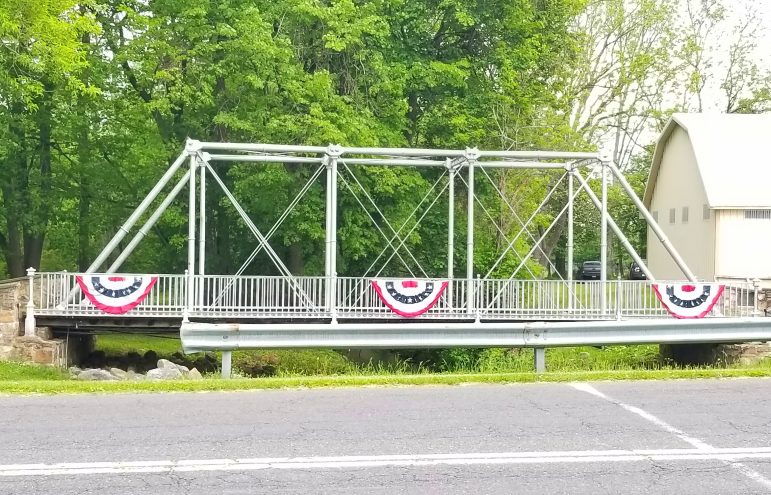 The Pony Bridge is always decorated for major holidays, including Memorial Day and the 4th of July. At Christmastime, Hellertown Historical Society volunteers string lights across the bridge, which Santa Claus has also been known to visit.

You’ve probably walked or driven past it dozens–if not hundreds–of times, but did you know that the small silver bridge on the north side of W. Walnut Street in Hellertown may actually be one of the most historically significant spans in America?

That’s according to the website HistoricBridges.org, which has documented the history of what many locals refer to as the “Pony Bridge” in considerable detail.

Built in 1860 by the Beckel Iron Foundry and Machine Shop in Bethlehem, the Pony Bridge, aka Wagner’s Bridge, aka the original Walnut Street Bridge “is one of the rarest and most important historic bridges in the United States,” according to Historic Bridges. 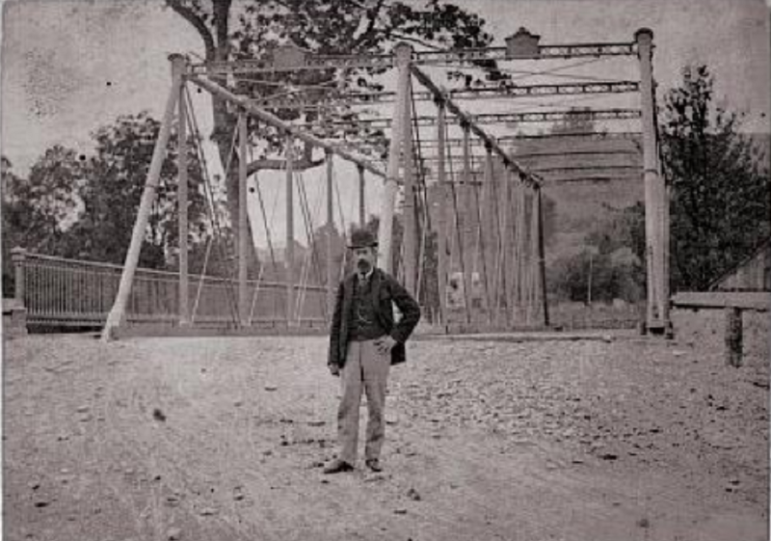 Above, Lawrence Beckel stands in front of a similar bridge in Easton, circa 1885. Beckel’s company, Beckel Iron Foundry and Machine Shop, built the Hellertown “Pony Bridge” around 1860.

That’s because–according to the site–it is among the oldest surviving all-metal bridges in the U.S., and also because of some unusual details it possesses, such as its cast iron floorbeams, which the Historic Bridges authors say are “nearly unheard of.”

Exactly how the bridge acquired the name “Pony Bridge” is a bit of a mystery. Although there is a type of bridge truss called a “pony truss,” it wasn’t used in its construction.

The Hellertown Historical Society members who maintain the restored Pony Bridge as part of the Heller-Wagner grist mill complex on Walnut Street appreciate its historic significance, while recognizing its place in the hearts of many community members.

For Hellertonians, the bridge may be where a cherished wedding or holiday photo was snapped, or seeing it may simply evoke fond memories of growing up here.

Unfortunately, many beloved landmarks are lost due to the ravages of time, neglect and other forces, which is why putting the Pony Bridge–and hopefully the grist mill as well–on the National Register of Historic Places (NRHP) has become a priority for the society. 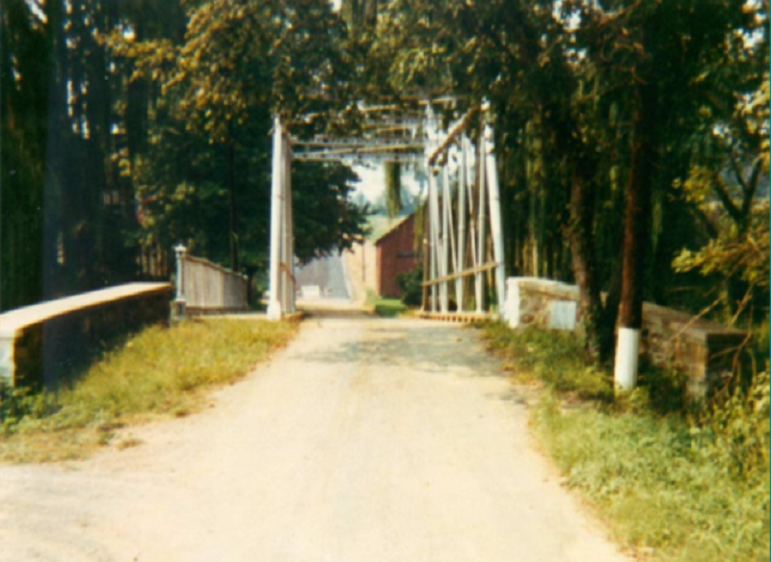 Above, a rare view of the Walnut Street Bridge (aka the Pony Bridge) in its final year of service to the community. The above view is toward the west. In 1970, with the expectation of increased traffic upon the opening of Saucon Valley High School, the bridge was replaced by the current structure spanning the Saucon Creek. (Credit: Hellertown Historical Society)

A boost to that effort came in May, when the Pennsylvania Historical & Museum Commission (PHMC) reviewed information about the bridge and deemed it of historic significance. Consequently, the PHMC will support its nomination to the NRHP.

It is now up to the Hellertown Historical Society to completely document the bridge’s history as part of the nominating process. According to some of the research the HHS volunteers have conducted, the following “bridge facts” have been established: 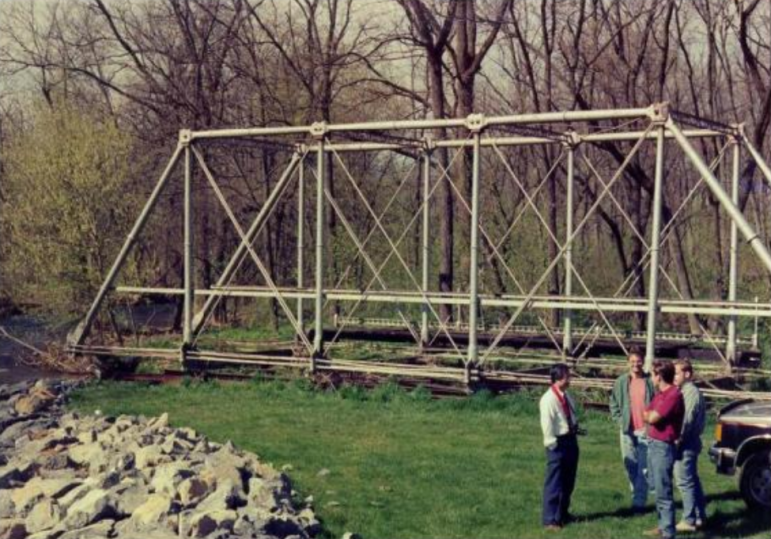 The Pony Bridge is owned by the historical society while the nearby grist mill is owned by the Borough of Hellertown, and if or when either of them is added to the NRHP it will become the first structure in Hellertown borough to be listed on the register.

Several structures in Lower Saucon Township have been listed over the years, however two of them have disappeared from the landscape. Ehrhart’s Mill on Old Mill Drive was destroyed in a 1995 arson fire, and the Meadows Road Bridge–which was only added in 2020–is being demolished due to major damage it sustained after being closed in 2018.

By being proactive, and with the support of borough officials, HHS members hope they will be able to preserve two of Hellertown’s most iconic landmarks in a way that will allow generations to come to enjoy them.

They also need community support in these endeavors, and that includes help from additional volunteers.

“You don’t need to be passionate about history to help us, just about your community and giving back,” said HHS member Roy “Chip” Wagner, who has been active in the effort to put the Pony Bridge on the NRHP.

“There have been a core number of current volunteers that really do so much,” he said. “They need some help to lighten their load.”

Volunteer roles that need to be filled include the following:

To learn more about these opportunities as well as other ways you can help, call 484-852-1776 or email volunteer@hellertownhistoricalsociety.org, or stop by the HHS booth at the Saucon Valley Farmers’ Market on Sunday, July 24 from 9 a.m. to 1 p.m. The market is located at 409 Constitution Ave., Hellertown, next to the Hellertown Area Library and across the street from Dimmick Park. It is held weekly on Sundays through Nov. 20.

For more information about the Hellertown Historical Society, to reserve the Tavern Room (proceeds support HHS) or to make a donation, visit HellertownHistoricalSociety.org. 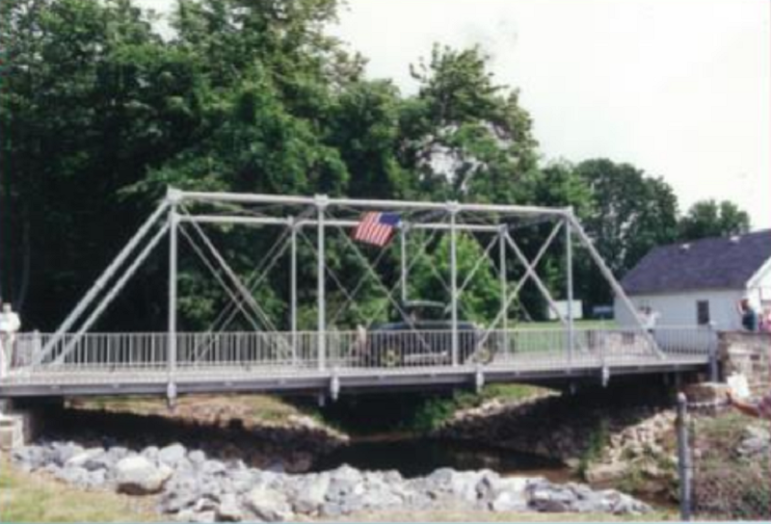 At the conclusion of a lengthy restoration, the reassembled Pony Bridge was placed on its final abutments in 2000. The bridge was rededicated in 2010 after the Heintzelman Funeral Home Inc. of Hellertown made a generous donation that was used to replank the bridge. Above, an antique car passes over the bridge as part of the 2000 dedication ceremony (no vehicles are permitted on the bridge today, however pedestrians can walk across it). (Credit: Hellertown Historical Society)