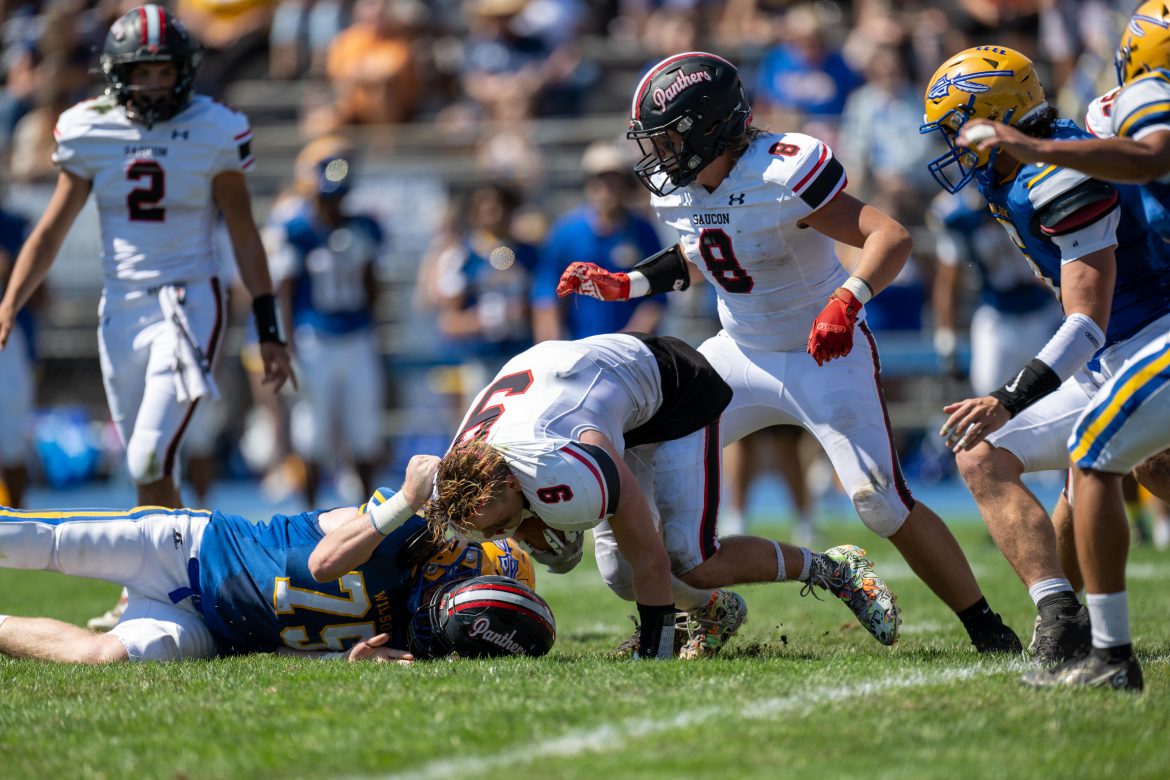 Saturday afternoons at Wilson are always expected to be tough games.

Taking part in a Saturday afternoon matinee, the Panthers of Saucon Valley prowled into Wilson Boro in search of their next prey.  Saucon previously defeated the Salisbury Falcons last week after dropping their season opener to Notre Dame.  The Wilson Warriors were searching for their first win of the season registering losses to both Pen Argyl and Palisades. Last year, when the Panthers and Warriors tangled, it was the Warriors who came out on top after surviving a late Panther attack.  So the stage was set:  Would the Saucon Valley Panthers get out of town with their second consecutive win?, or would the Wilson Warriors fight off the Panther invasion to secure their first win of the 2022 season?

The Panthers wasted very little time taking control of the game.  Only three plays in Saucon Valley emptied the backfield and spread the field with five wide receivers.  Panther quarterback Travis Riefenstahl dropped back and threw a strike to Jared Rohn who split the safeties on a post-route for a 65-yard touchdown. Braeden Schriffert’s PAT was good and only :58 seconds into the game the Panthers pounced on the Warriors to take a 7-0 lead. 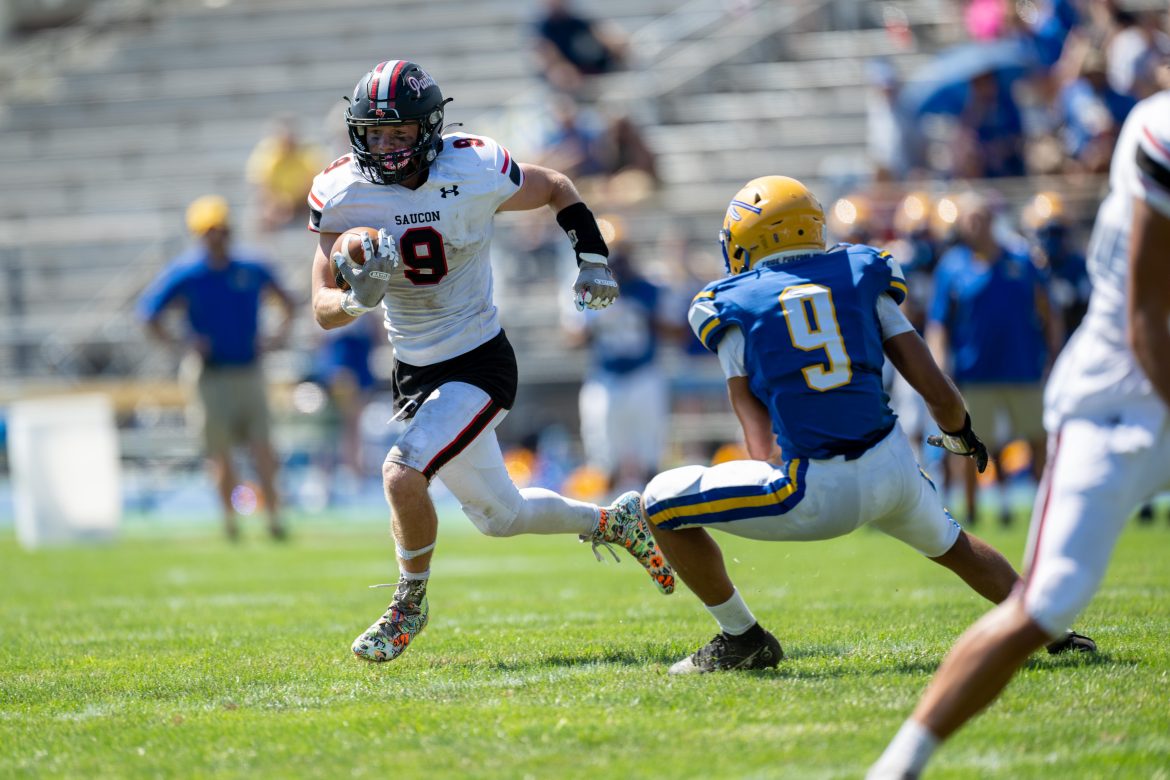 Jared Rohn (9) got things started quickly on the third play of the game with a 65-yard TD catch.

The Saucon Valley defense proved equal to the Panther offensive effort and pitched a three-and-out punt.  Taking over at their own 48-yardline, Rief and Rohn hooked up three more times for about forty yards total.  It was an eight play drive however that ended with Saucon Valley running back Ty Pfizenmayer hammering his way into the end zone with a an 11-yard misdirection run.  Schriffert’s extra-point hit its mark and with 5:28 remaining in the opening quarter the Panthers led 14-0.

After another three-and-out pitched by the Panther defense, the Saucon offense was back in business at their own 26-yardline.  Following a 1-yard gain up the middle by Jared Rohn it looked as if the Panthers were going to dial up a pass.  The Panther offense once again showed an empty backfield look with five wide receivers.  As Riefenstahl dropped to pass he was forced to step up in the pocket in the face of a little pressure off the edge.  Instead of throwing, however, Rief tucked the ball, bounced outside to his right and outran the Warrior pursuit down the Wilson sideline for a 73-yard touchdown run.  Schriffert’s kick gave the Panthers a 21-0 advantage with 2:13 still left on the first quarter clock. 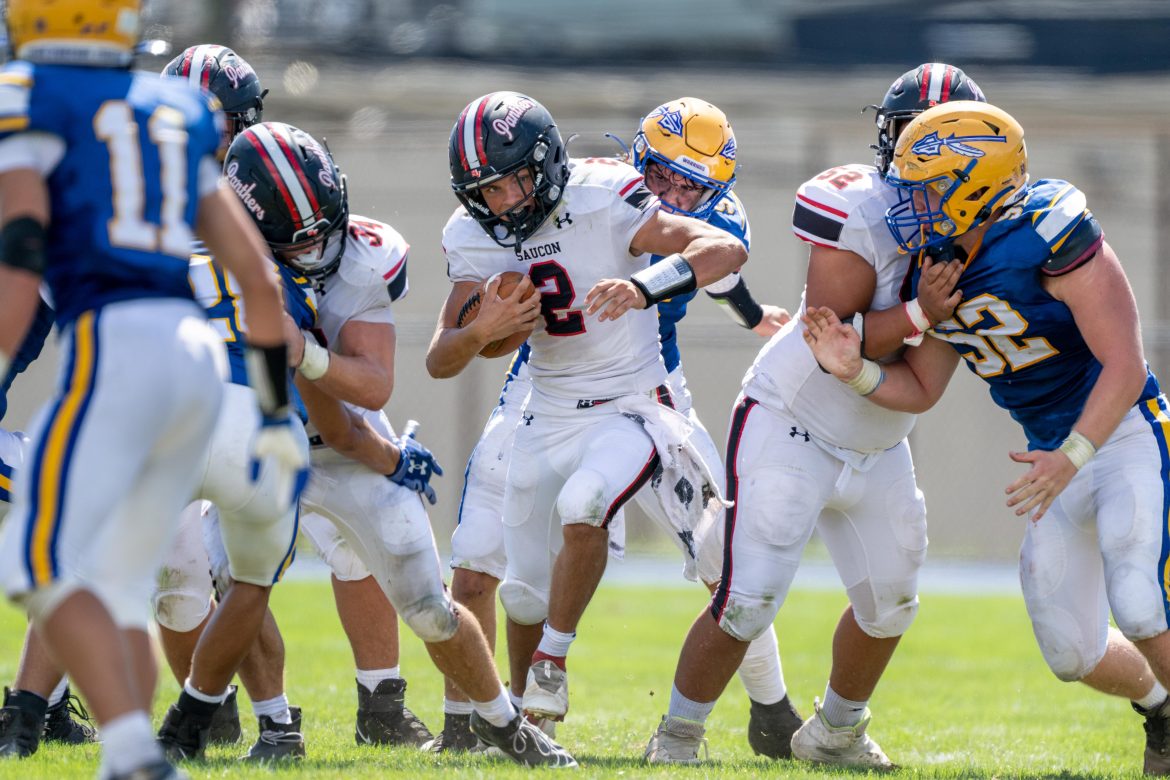 Travis Riefenstahl (2)  stepped up, bounced out and scrambled big for a 73-yard touchdown run.

Rief’s run and Schriffert’s kick proved to be the final points of the first half.  Saucon Valley did threaten for more points, but came away empty with a fumble at the Warrior 2-yardline followed  by a couple of turnover-on-downs at the Wilson 8-yardline.  When the teams hit the locker room for the halftime break the score remained 21-0 in favor of Saucon Valley.

It was another three-and-out by the Warriors to start the second half.  Saucon Valley then started their drive from just inside the midfield stripe at the Warrior 48-yardline.  Highlighted by a 25-yard blast around right end by Jared Rohn and an Alex Magnotta completion in traffic over the middle down to the 1-yardline, Riefenstahl followed the Saucon student body around right end for another score after only six plays.  Schriffert made it 4 of 4 and Saucon extended their lead to 28-0 with 7:07 showing on the third quarter clock. 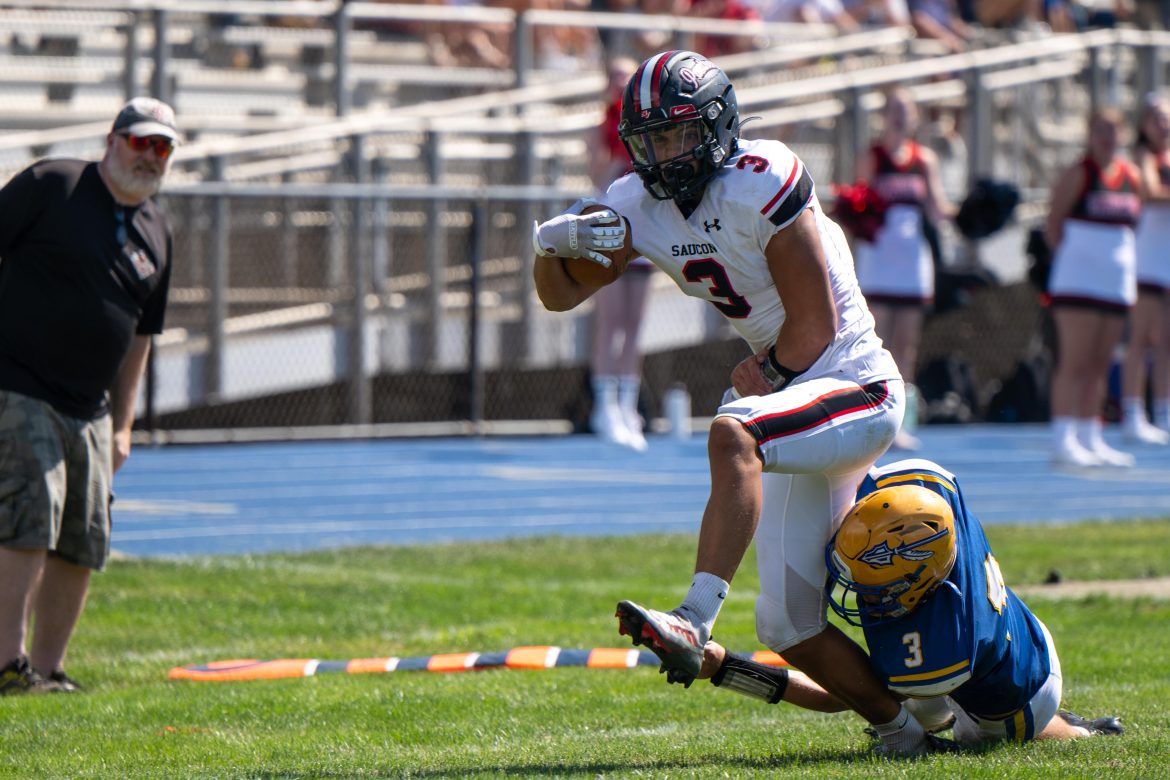 Wilson’s Rodney Bronson looked to pop the ensuing kickoff return out to midfield, but Saucon’s Braden Weiss stripped the ball during the return. Ray Santiago hustled to recover the loose ball giving possession back to the Panthers with great field position.

Saucon then manufactured another six play scoring drive that included a 33-yard catch by Alex Magnotta deep into Warrior territory.  It was Jack Robertson however, who put points on the board when he took a little shuffle-pass caught behind the line of scrimmage to the house for a 1-yard TD score.  Schriffert’s PAT was good to make it 35-0 and trigger the mercy-rule clock with a little over four minutes to go in the third quarter. 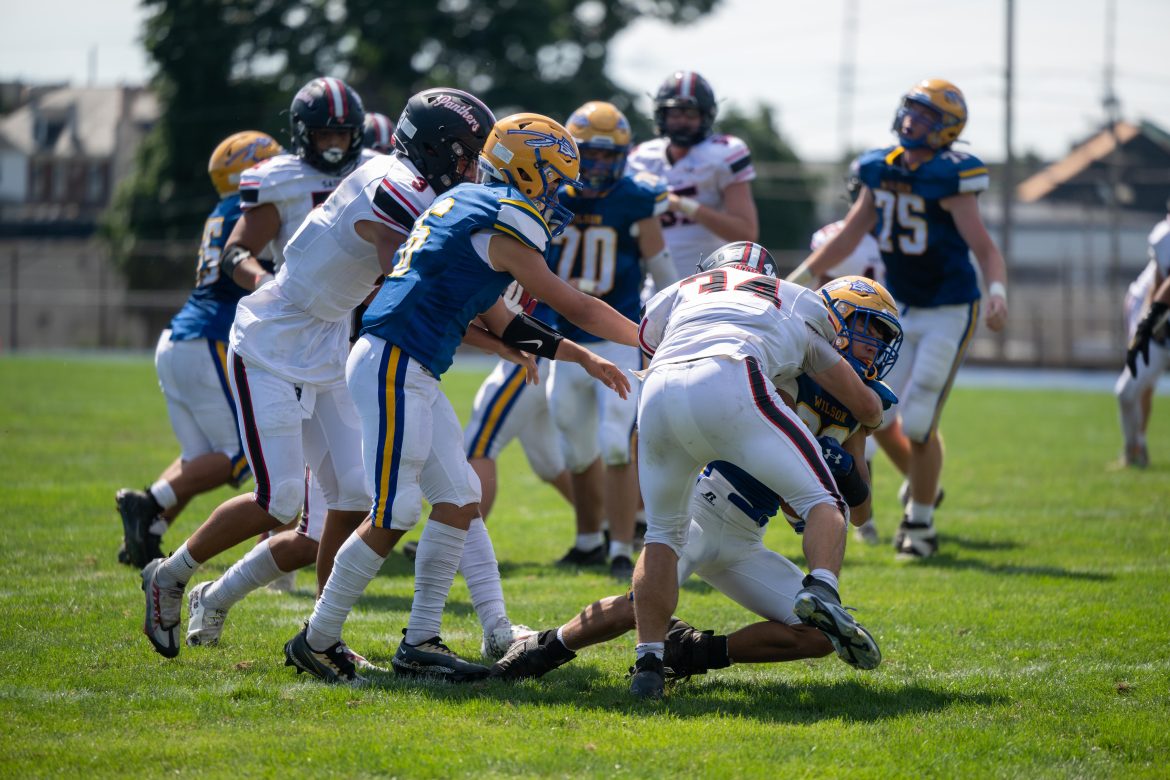 The Panther defense pitched a shut out until late in the game.

Wilson was able to pick up a late touchdown with a 42-yard run by Markhi Fields, but too much damage had already been done.  With a 35-7 victory over the Wilson Warriors, Saucon Valley improved to a 2-1 record. 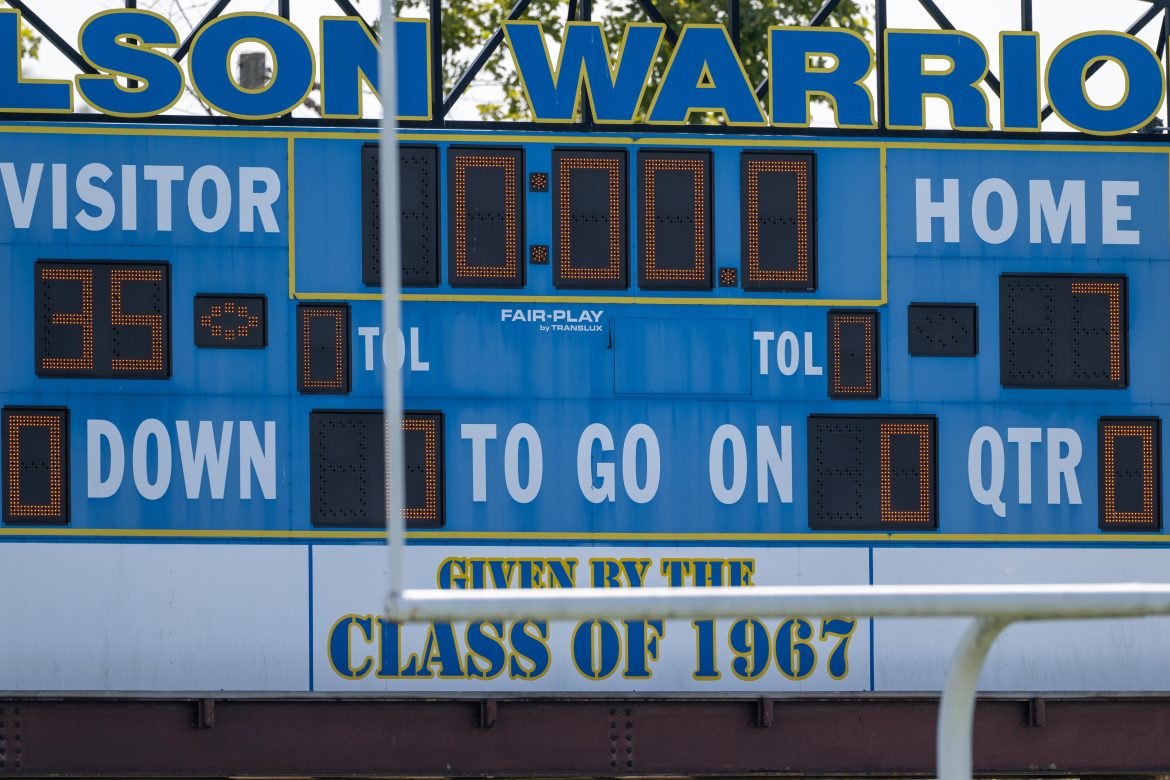 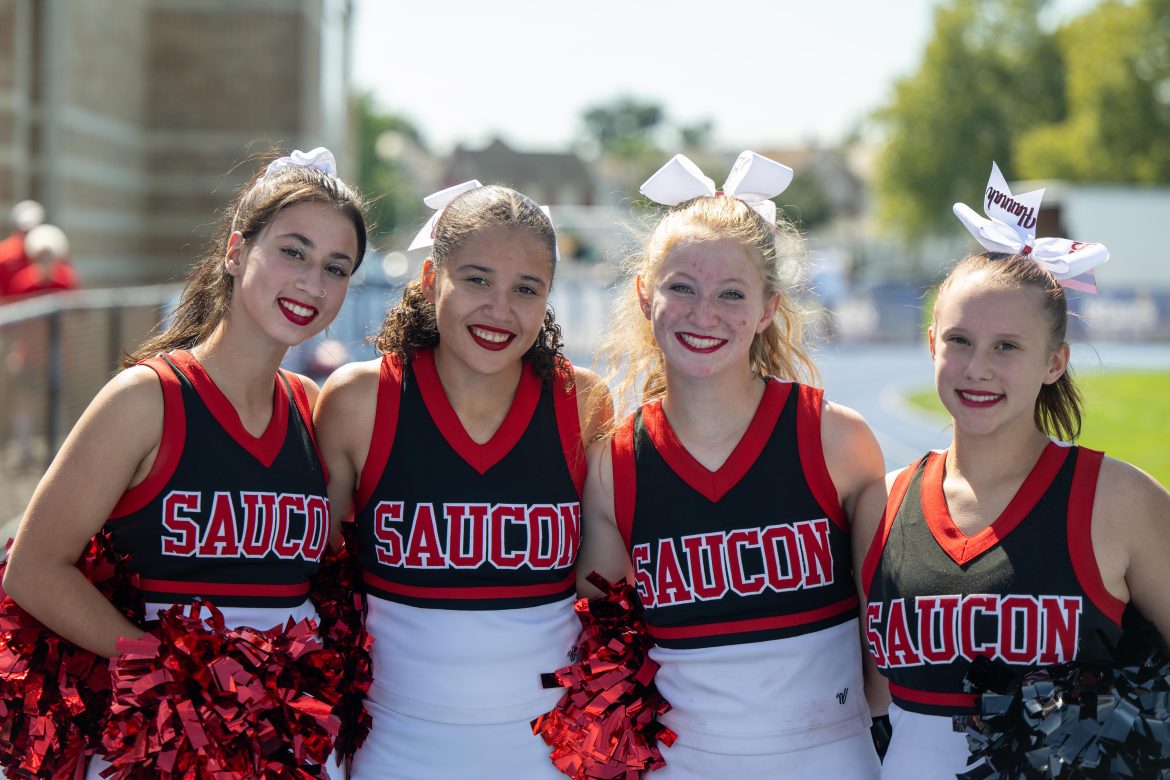 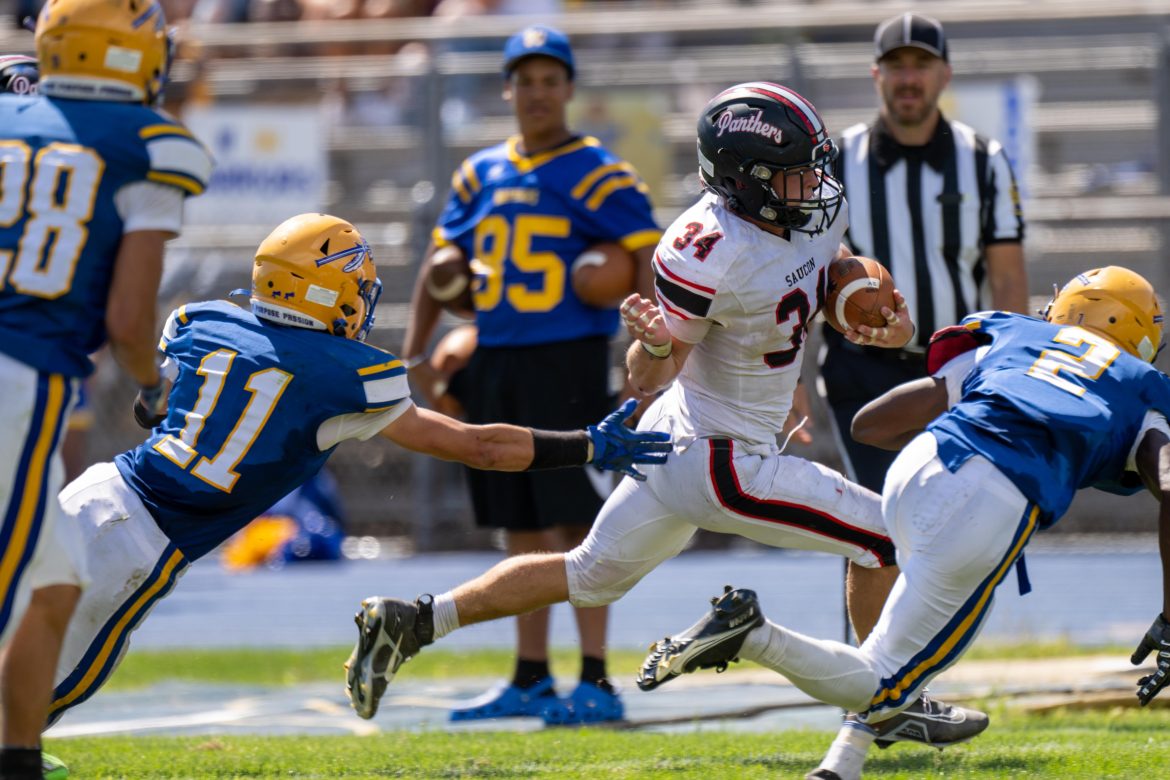 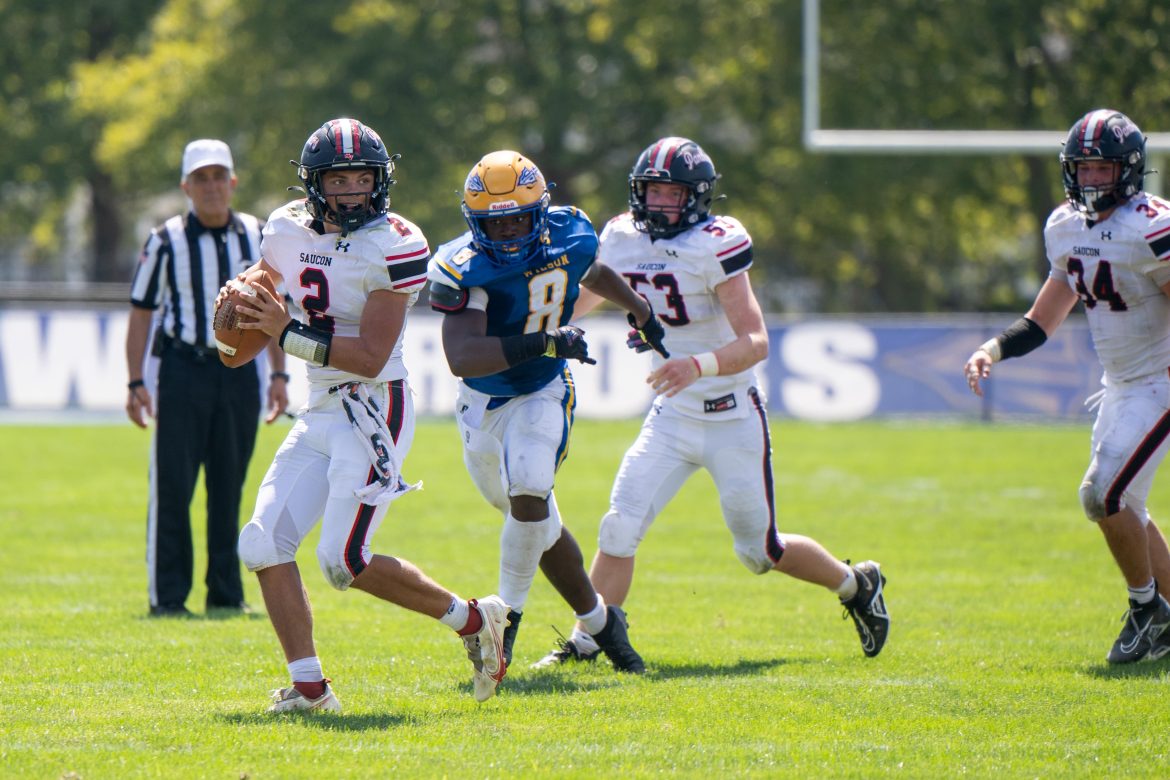 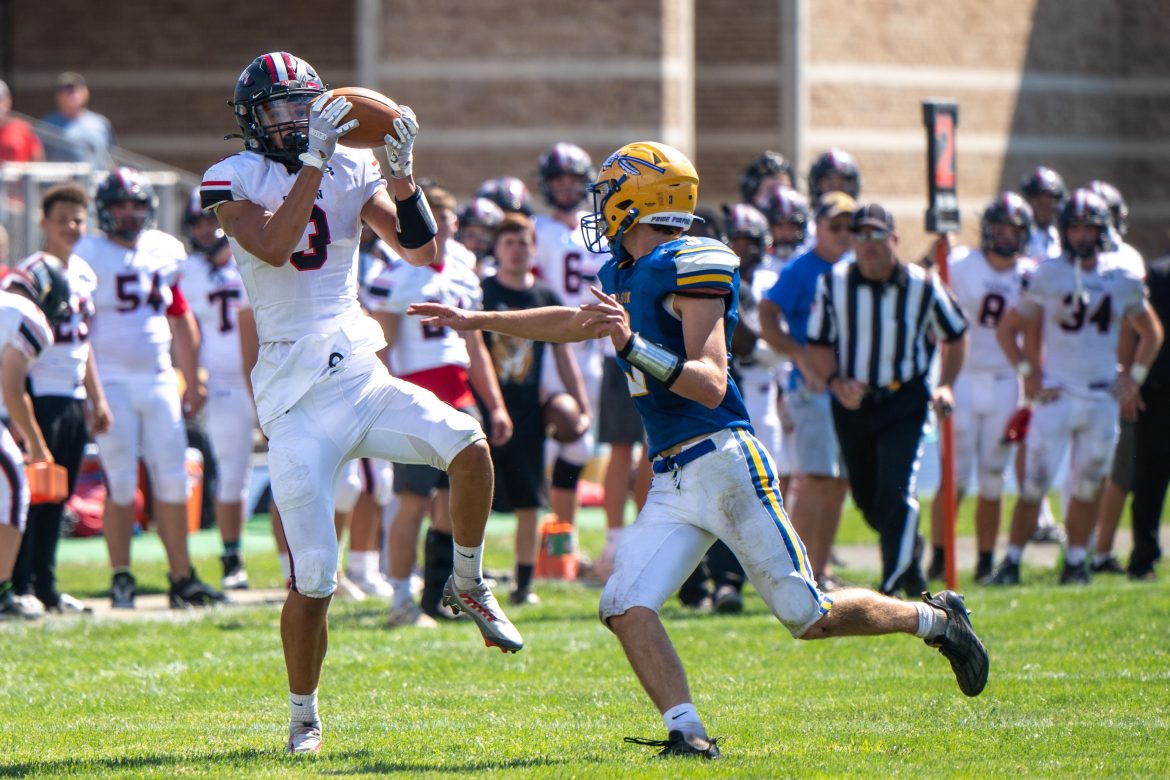 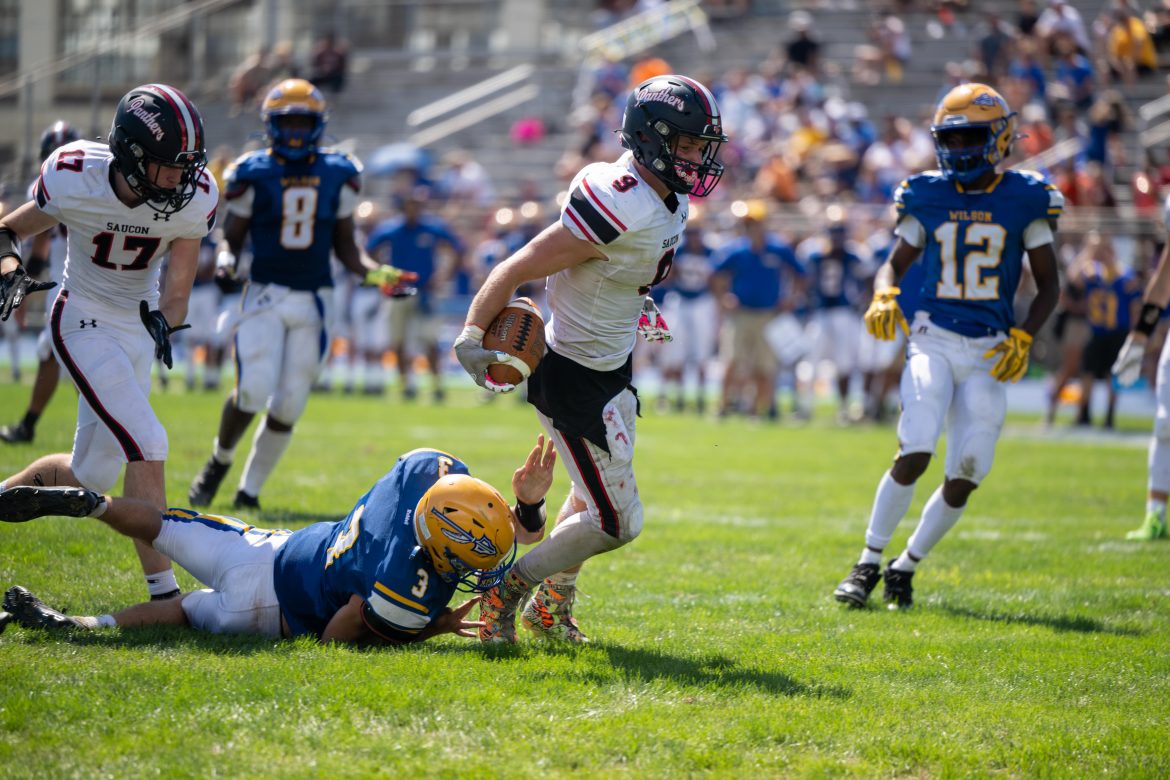 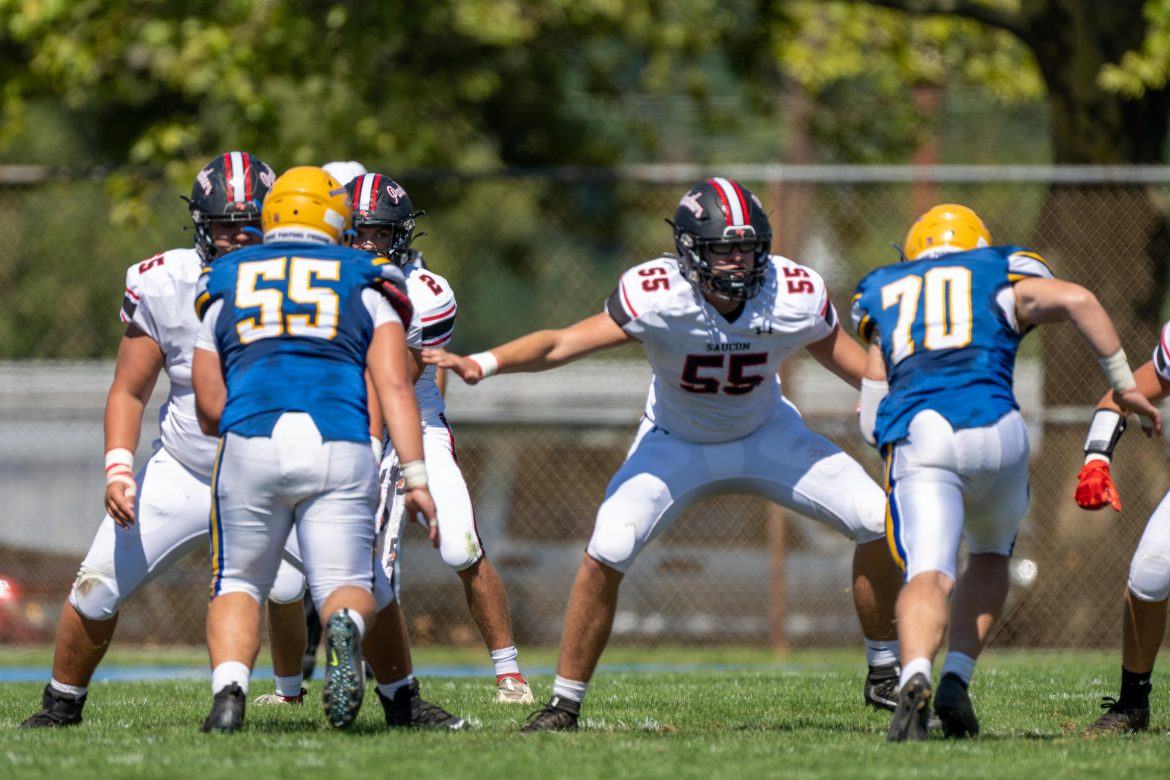 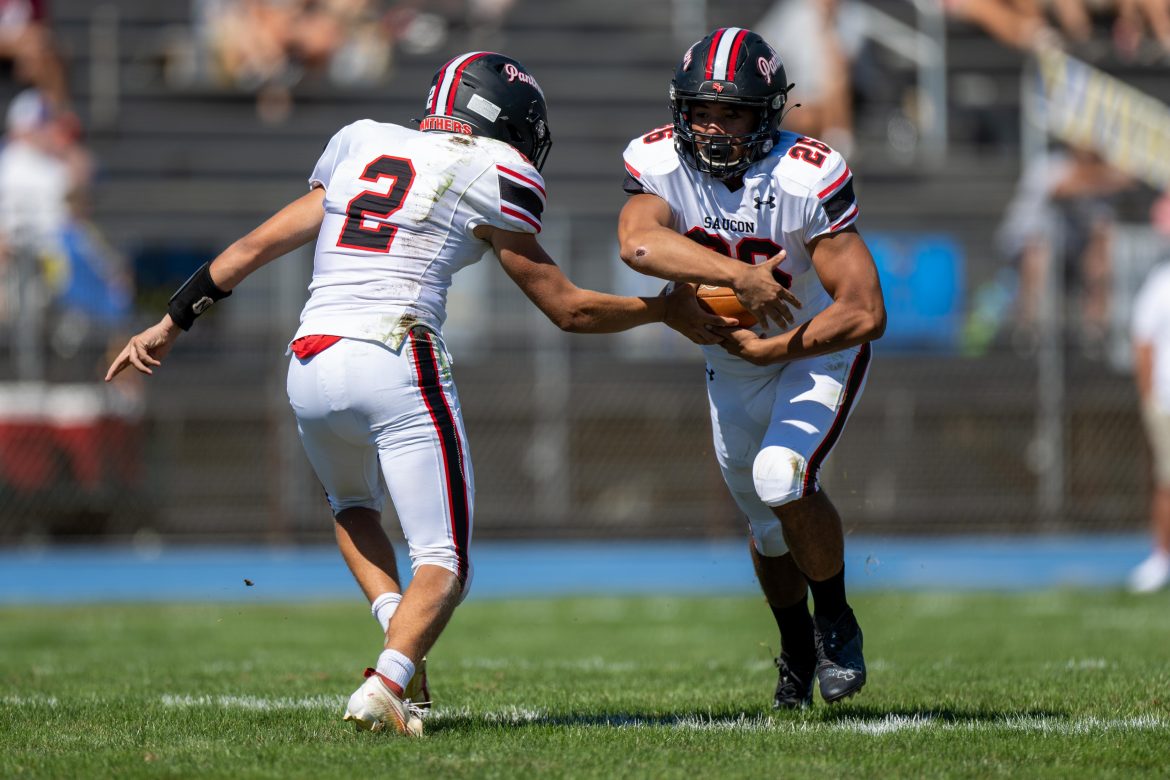 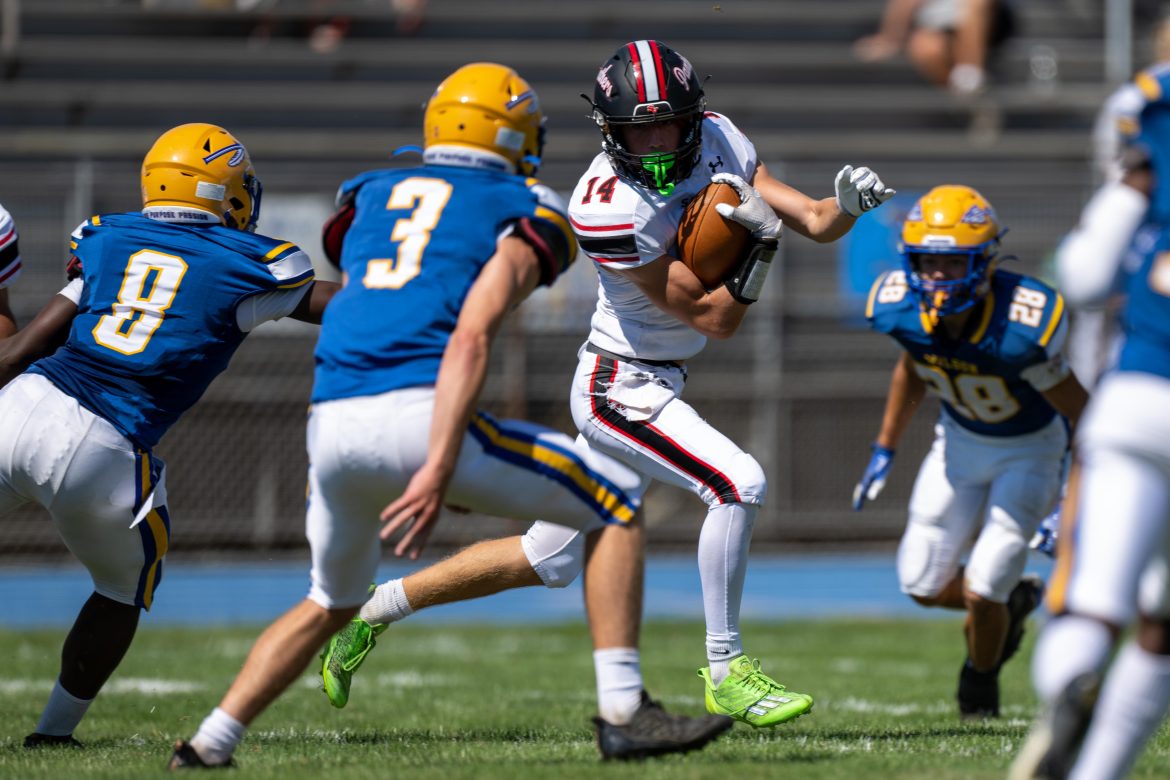 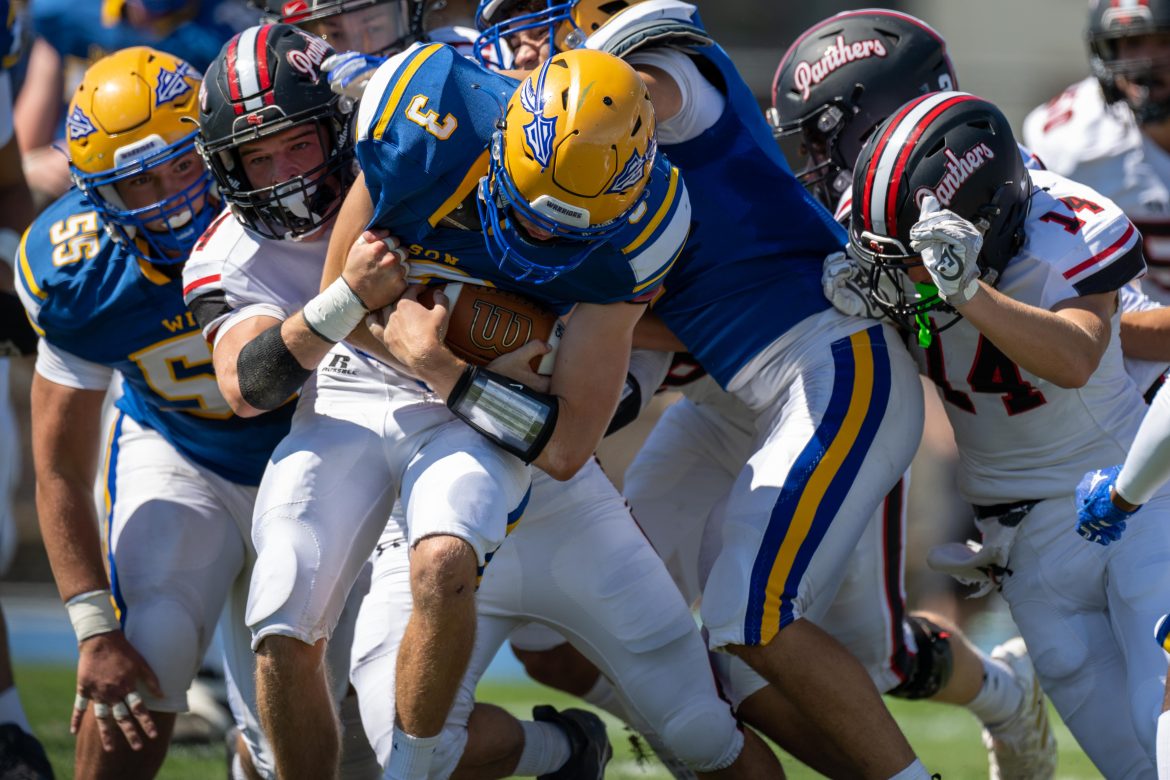 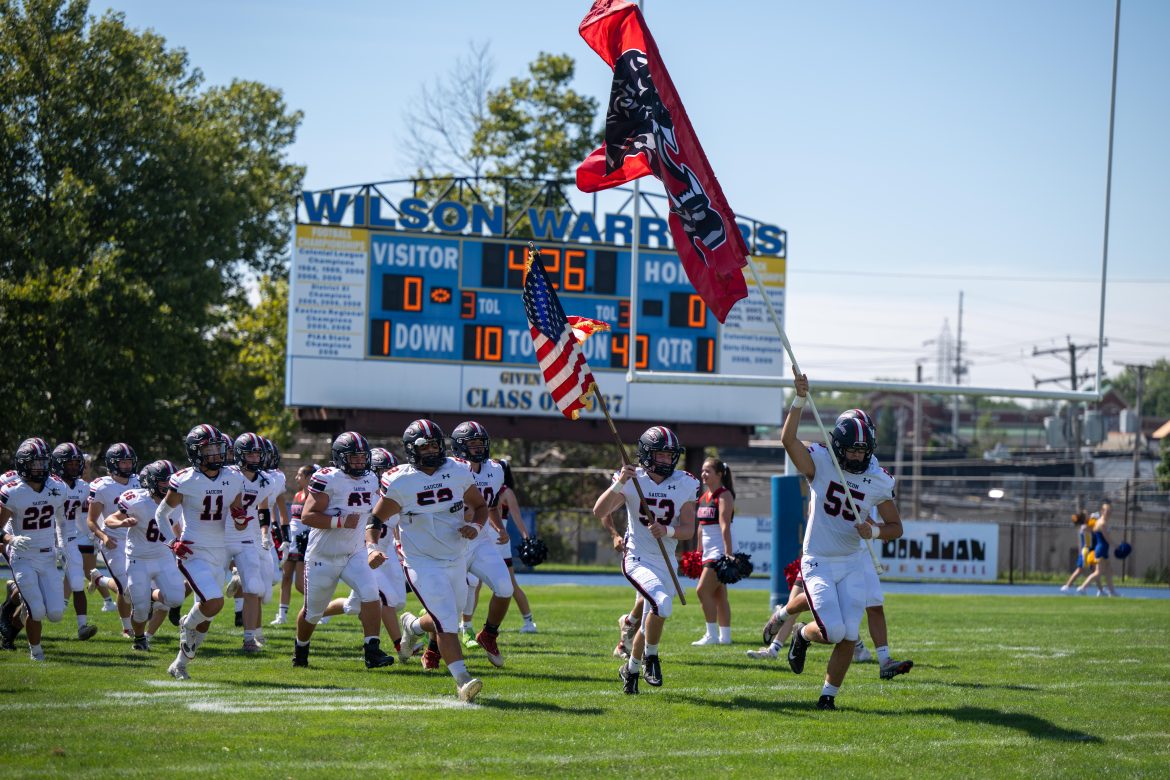 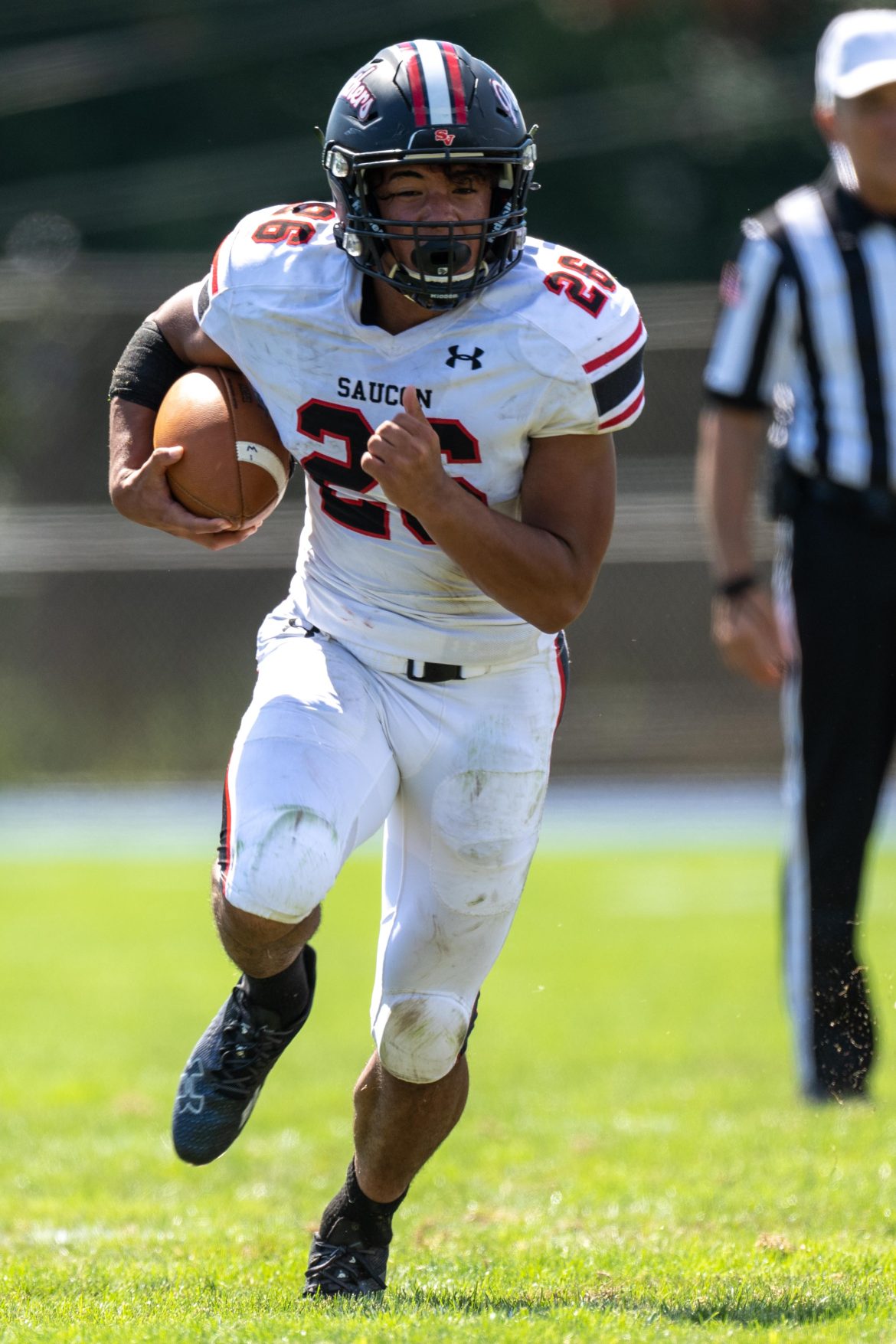 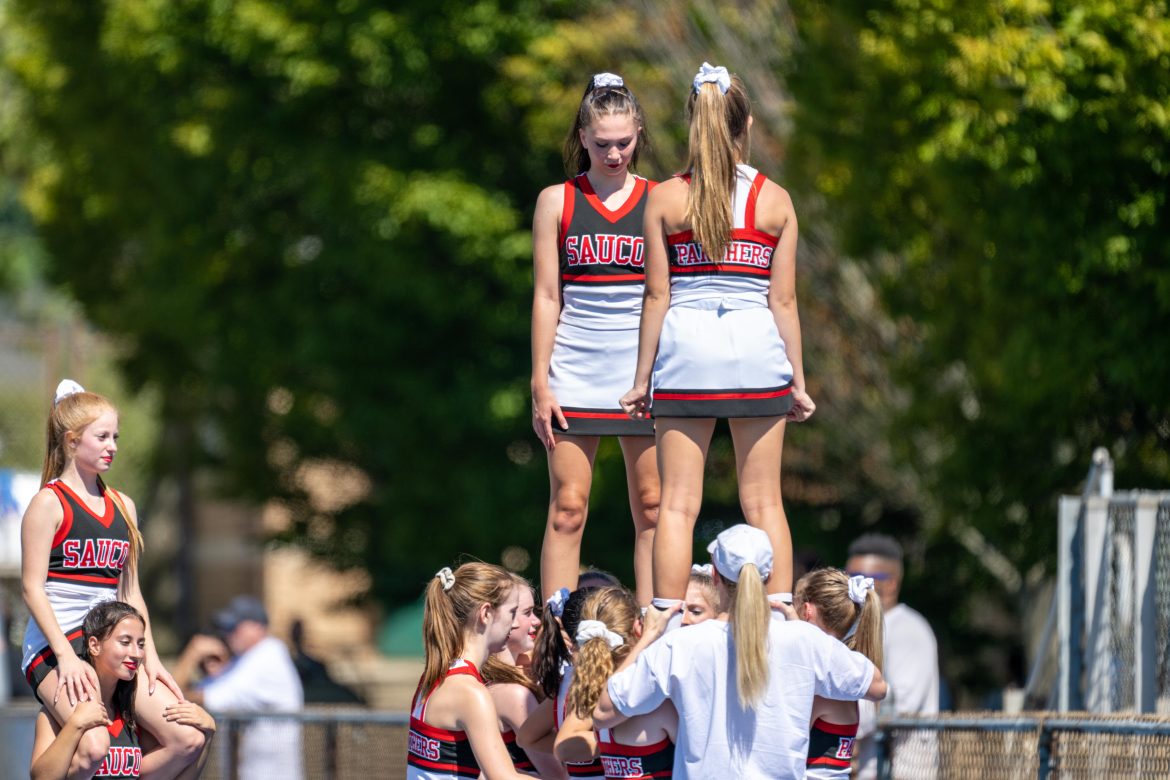 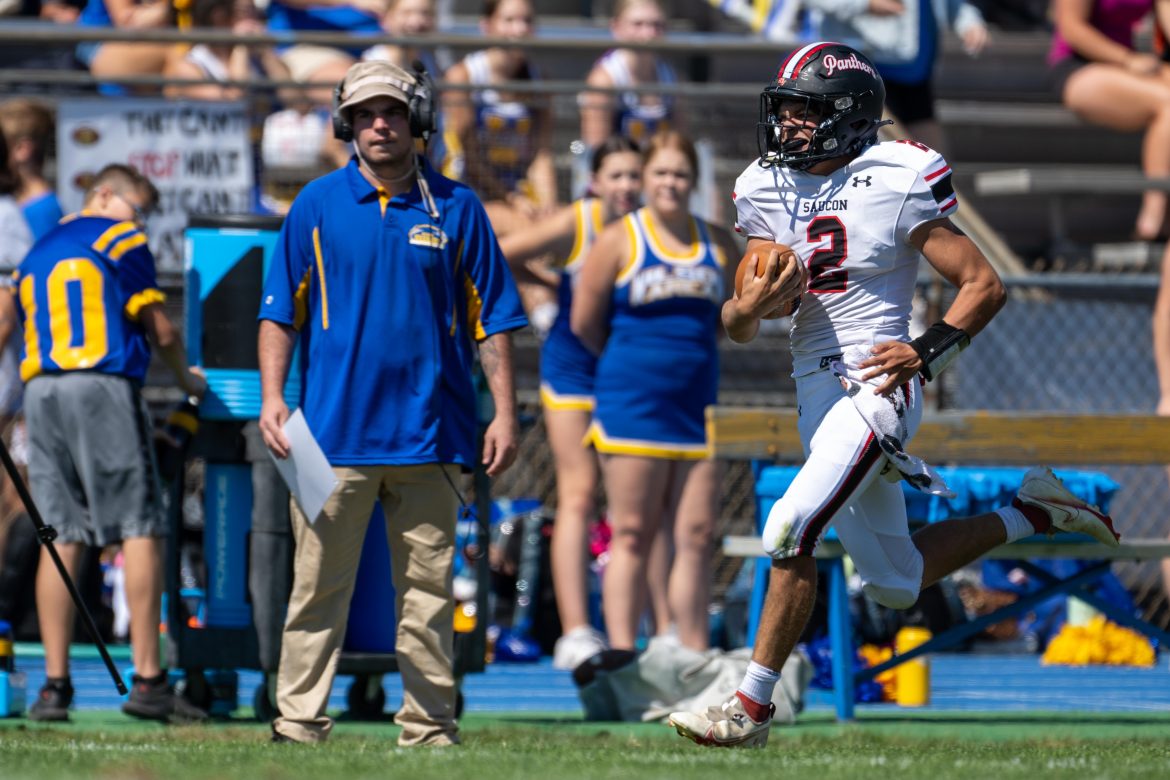 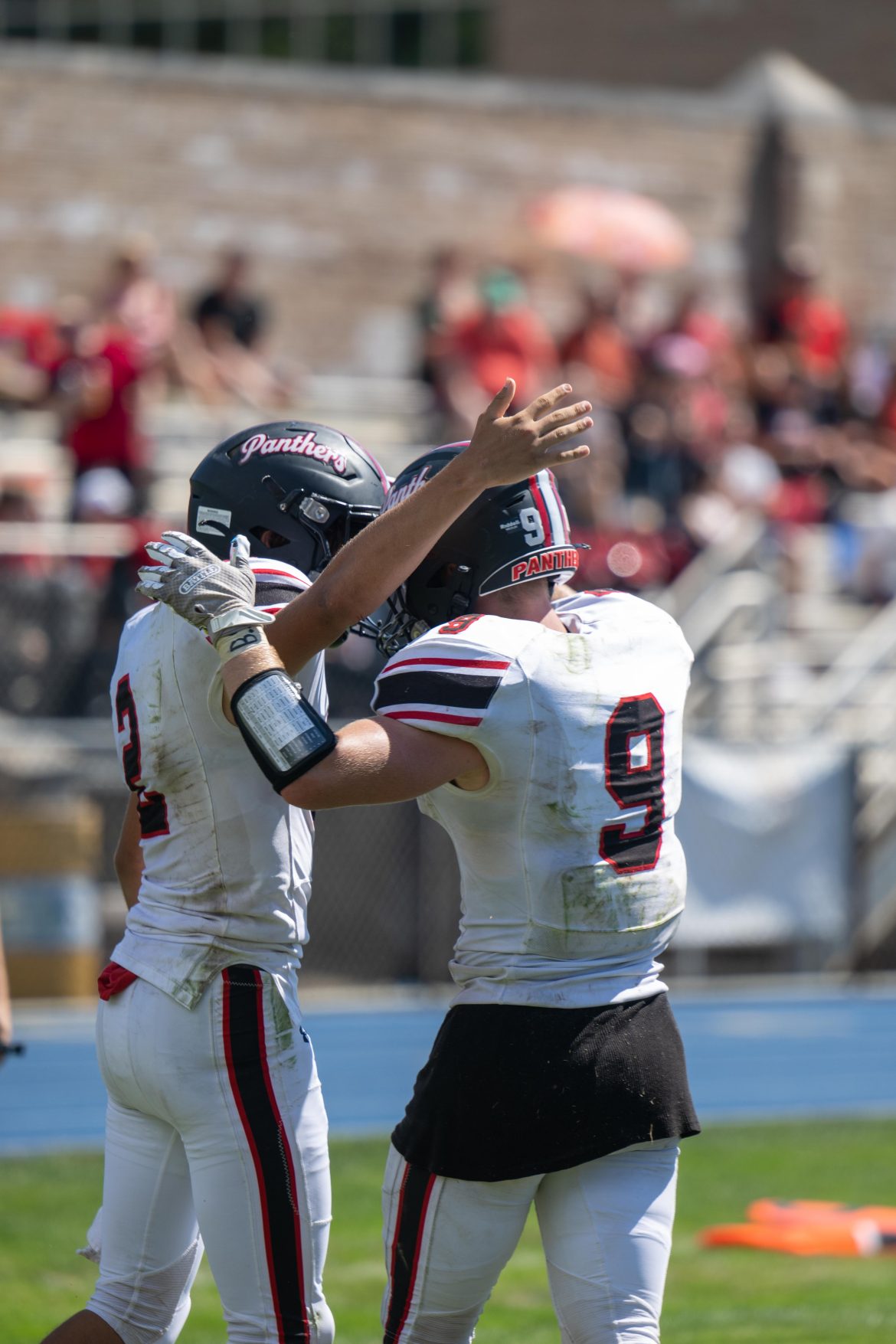 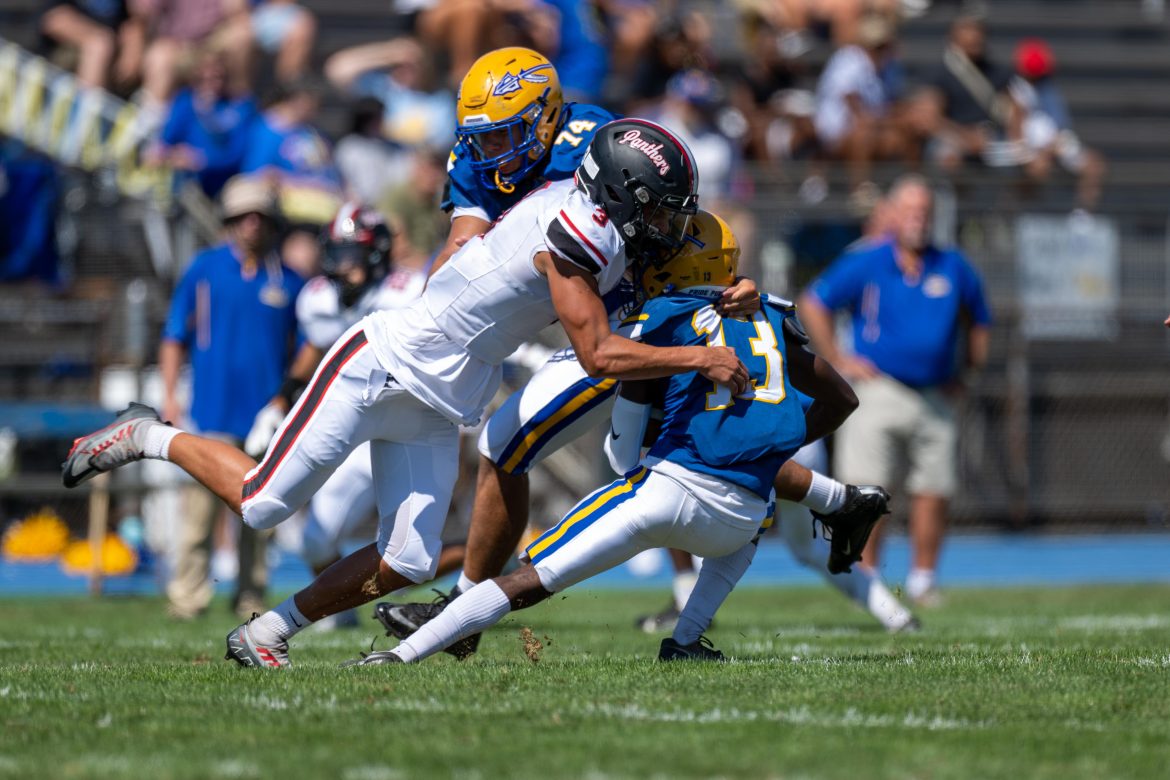