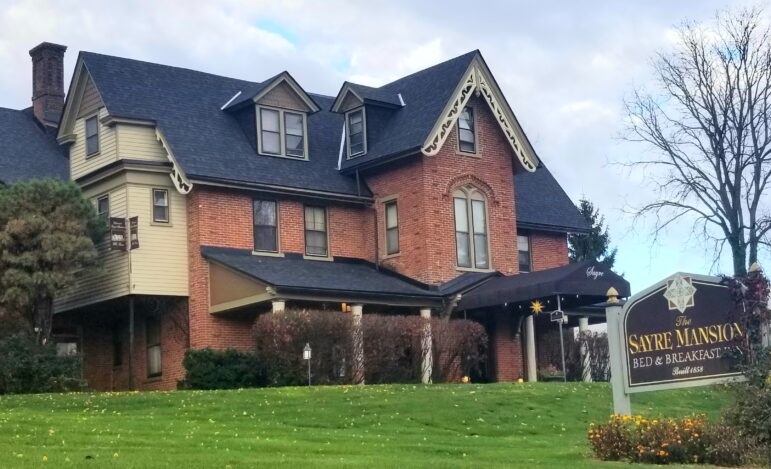 Bethlehem’s historic Sayre Mansion will be explored by paranormal investigators on an upcoming episode of the hit TV show “Ghost Hunters.” Built in 1858, the mansion has been an inn for nearly 30 years.

A South Bethlehem landmark will soon be in the limelight thanks to a popular TV series whose stars explore paranormal activity at well-known locations throughout the U.S.

The city’s Sayre Mansion–which was built in 1858 by industrialist Robert Sayre–will be explored by the team from “Ghost Hunters” on Saturday, Nov. 19 at 9 p.m. on the Travel Channel, the owners of the mansion announced on its Facebook page over the weekend.

In developing the episode, the producers of the series reportedly sought out people who lived in the apartments in the mansion until the early 1990s to interview them about paranormal activity they may have experienced or witnessed over the years.

For nearly 30 years, the mansion has been a bed-and-breakfast as well as a venue for special events like weddings, which are regularly held outside on its spacious grounds.

Prior to its conversion to overnight lodging, the mansion was an apartment building for decades, following the Sayre family’s sale of it during the early 20th century.

It remains an iconic structure in the city in part due to its prominent location on a hill near the south end of the Hill-to-Hill Bridge, overlooking the city’s south and north sides.

Tens of thousands of vehicles pass by the mansion daily on Rt. 378 (also known as Wyandotte Street in South Bethlehem) and W. Third Street.

Robert Sayre lived in the large Gothic mansion with his family for nearly 50 years, until his death in 1907. In the mid-late 19th century, Sayre was chief engineer of the Lehigh Valley Railroad and a vice president of the Bethlehem Iron Company, which later became the Bethlehem Steel Corporation. He also helped found other well-known South Side area institutions such as Lehigh University, St. Luke’s Hospital and the Cathedral Church of the Nativity, which is located catty-corner from the mansion.

The Facebook post by the Sayre Mansion noted that the episode of “Ghost Hunters” featuring the inn will also be available for streaming on Discovery+. As of Sunday, the post had been shared nearly 600 times and was generating hundreds of comments in which residents, former guests and others shared their excitement for the show’s airing.

Note: Josh Popichak lived in a Sayre Mansion apartment as a child, from the late 1970s to the early 1990s.