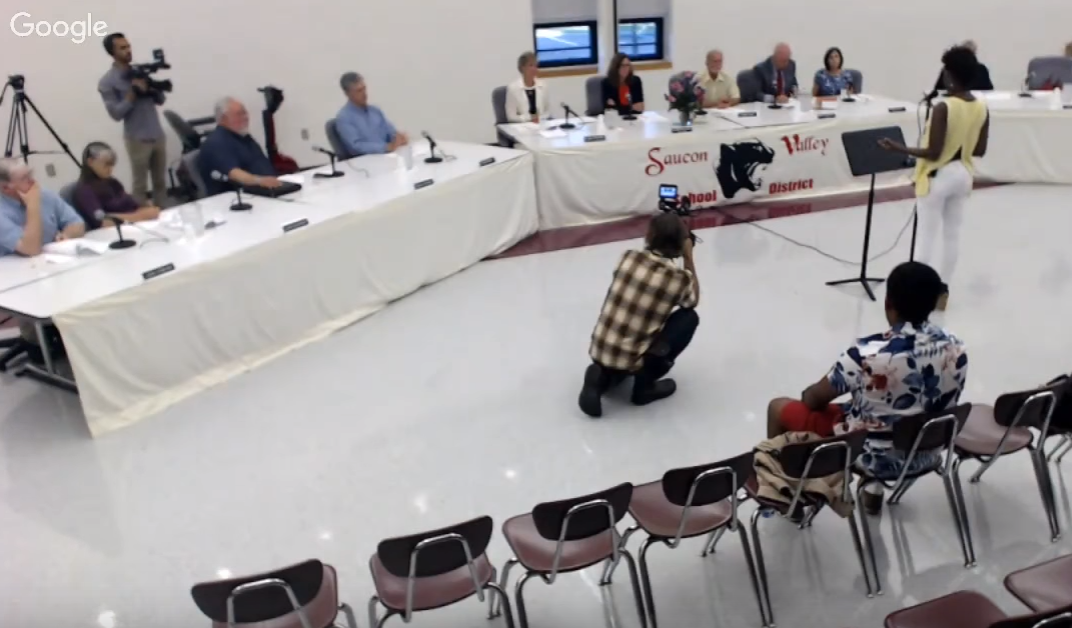 A screenshot of a Google Hangouts recording of the Aug. 8, 2017 Saucon Valley School Board meeting, which was filmed by members of an ABC News production team for a documentary they are producing. Addressing the board is parent Sheila Maclean. 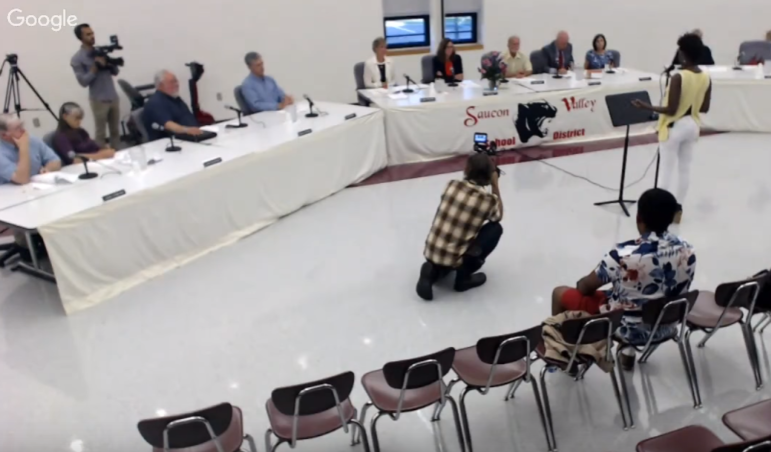 A screenshot of a Google Hangouts recording of the Aug. 8, 2017 Saucon Valley School Board meeting, which was filmed by members of an ABC News production team for a documentary they are producing for A&E Networks. Addressing the board is parent Sheila Maclean.

It was an incident involving two students fighting at an October 2016 high school pep rally that cracked the lid on issues involving racial intolerance at Saucon Valley High School, and ultimately helped put the district in a national spotlight in the form of a Rolling Stone article and subsequent civil rights lawsuit brought by the parents of one of the students against the district.

But that incident was far from the first to involve racism, superintendent Dr. Monica McHale-Small told the school board at their meeting Tuesday night.

In a report about the work of the recently-formed Saucon Valley School District District Equity and Inclusion Committee, McHale-Small said the first racism-related incident she was made aware of occurred in October 2014, just a few months after she began her tenure at Saucon Valley.

“It was that 2014 incident that motivated me to begin to work on a plan to enhance the cultural proficiency and capacity of district administration to proactively intervene when incidents occur,” she said. “It was also in October 2014 that I became aware of what has been a longstanding tolerance for a display of the Confederate flag by a small but visible group of students.”

As she has done previously, McHale-Small noted that in her decades of work in education, before coming to Saucon Valley she “had never experienced a school setting where a flag that was widely held as a symbol of racial intolerance was openly and casually displayed on school property.”

Before her arrival at Saucon Valley, she said, she can “attest to the fact that there have been numerous incidents of racially and ethnically insensitive language and actions, many of which have targeted our black and brown students. Some of these incidents have involved the Confederate flag directly, and I can tell everyone here tonight that I have been contacted by more than one parent and asked why we have continued to allow a symbol of hate on our campus. Personally I do not believe the flag–a symbol associated with racial intolerance–belongs on a campus where we are working hard to support our students, faculty, staff and administration to become more understanding, tolerant and supportive of all of our students, no matter their race, ethnicity, language, religion, gender or gender identity.”

McHale-Small said “one primary concern of the committee has been to find a way to better address incidents involving hateful language and symbols that are connected to racial and ethnic intolerance,” and that they–along with incoming Saucon Valley superintendent Dr. Craig Butler–share her views.

She acknowledged that First Amendment rights are important to many members of the Saucon Valley community, and that they should not be infringed upon, but said she believes “existing policy language could be used to limit the display of this offensive symbol, and some of the hateful language that has been used by a very small number of our students.”

She also cited District Policy 220, which prohibits “student expression that materially or substantially interferes with the educational process.”

The committee members and members of the administration “have concluded that the Confederate flag, the use of the N-word in all its forms and other specific language has indeed interfered with the educational process in Saucon Valley,” she said.

“At our meeting last week the (committee) agreed that the district needs to begin this school year with a strong statement on the type of culture we desire for our students, and also a statement that language and symbols that are demeaning or disrespectful will not be tolerated,” McHale-Small continued. “To this end it was agreed that the district schools will adopt a statement or compact as part of the student code of conduct. This statement will be developed by the administration with guiding input from the high school spirit group–a group of student leaders. It is my hope that, and the intention of the district equity and inclusion committee, that the specifics of this agreement will be shared with the board and community by Dr. Butler as soon as he begins his tenure.”

McHale-Small–who announced her retirement earlier this year–then noted that Tuesday’s meeting was her last as superintendent.

John Paulson, a district parent, thanked McHale-Small for her “leadership and guidance in this process,” and called her “terrific.”

He called the committee’s work “very important work” and said he hopes that “we can maintain the same level of effort and commitment that we have had during the past several months, as this is rolled out and deployed. Changing minds and changing behaviors is a long-term commitment, and so I just want to make sure that we do what we need to do for a long period of time to sustain that.”

Sheila Maclean, a parent of a student who she and her husband have said has been a victim of racism and harassment, also thanked McHale-Small for her work on that issue as superintendent.

“You will be greatly missed by my family, at the very least,” MacLean said. She credited McHale-Small’s “heart” and  “diligence” as motivators for her work “making sure that everyone gets a fair education.”

Joel Paulson, a rising senior at Saucon Valley and a member of the inclusion committee, shared his student’s perspective on McHale-Small’s impact.

“The impact it’s had on me is also incredible,” he added. “It’s helped me realize what I want to do in my life. … I’d like to double major in pre-law and education–no small feat, but I realized it’s something I want to do through our work here.”

“With a good head, and a good heart, hate will have no place to start,” he concluded. “Just remember that.”

Members of an ABC News film crew were at the meeting to film it and traversed the room throughout the evening.

Producer Westley Harris of Lincoln Square Productions told the board they were filming them for a television program that will air on A&E Networks as part of a four-part documentary series.

The next Saucon Valley School Board meeting will be held Tuesday, Aug. 22 at 7 p.m. in the high school Audion room.

The first day of school for students is Monday, Aug. 28.