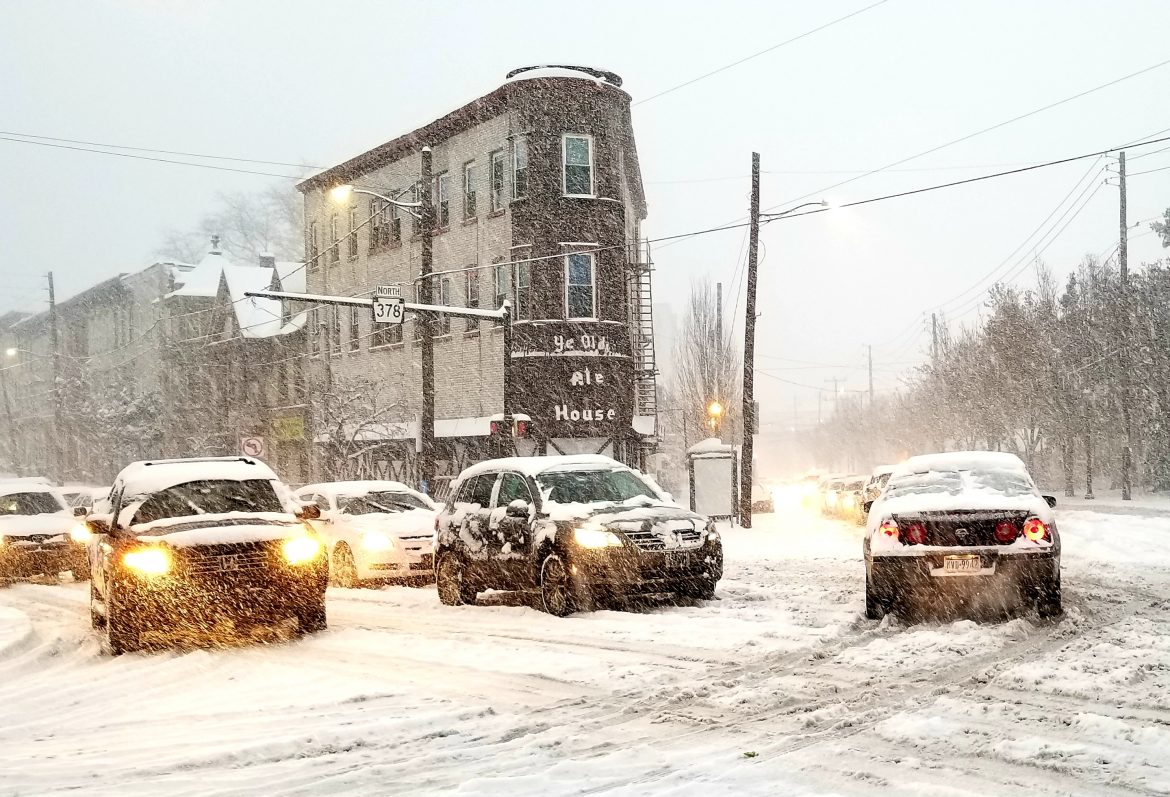 Cars were stuck in traffic as heavy snow fell near the intersection of Third Street and Brodhead Avenue in Bethlehem Thursday.

A rare mid-November snowstorm caught many Lehigh Valley residents off guard Thursday, dumping upwards of six inches of snow in just a few hours in the Bethlehem area, where near-gridlock shut down major arteries as rush hour approached.

The snow began to fall lightly at around noon and as the storm quickly intensified, even heavily-traveled roads like Route 412 in Hellertown and Bethlehem became icy and treacherous during the early afternoon hours.

By around 4 p.m., traffic on many of South Bethlehem’s streets was at a standstill.

At around this time it easily took upwards of half an hour to travel less than a block on parts of Third Street, Fourth Street, Brodhead Avenue, Broadway and Wyandotte Street, and many side streets were impassable.

With temperatures hovering in the upper 20s, a layer of compacted snow that had fallen on un-pretreated roads became a sheet ice, giving cars and even 4-wheel drive vehicles little traction, especially on hills and slopes.

Schools in the Saucon Valley School District dismissed students early on Thursday, with the high school and middle schools releasing classes at 10:45 a.m. and the elementary school at 11:30 a.m., before the snow began to fall. All after-school activities were canceled.

Many Hellertown businesses closed early or did not open at all due to the weather.

By early Thursday afternoon the National Weather Service had upgraded what had been a winter weather advisory for 1 to 3 inches of snow followed by sleet and freezing rain to a winter storm warning for 5 to 8 inches of snow for Northampton County only, although by 5 p.m. that much snow had easily fallen in parts of Lehigh County, such as Fountain Hill, as well.

At 5:04 p.m. the National Weather Service issued a winter storm warning for Lehigh County, predicting that 4 to 7 inches of snow would fall.

Stretches of road that are notoriously prone to accidents and traffic tie-ups during snowstorms–such as the top of Wyandotte Hill in Lower Saucon Township and Gauff’s Hill in Salisbury Township–remained open, although as rush hour approached traffic was crawling over them, according to the Waze app.

With snow and sleet still falling and speed limits reduced on highways by the Pennsylvania Department of Transportation this evening–including I-78 in Northampton County–motorists are being advised to stay off the roads if at all possible.

The National Weather Service said in its latest statement that Friday morning’s commute may also be impacted by the storm, although temperatures are forecast to rebound to the low 40s on Friday. 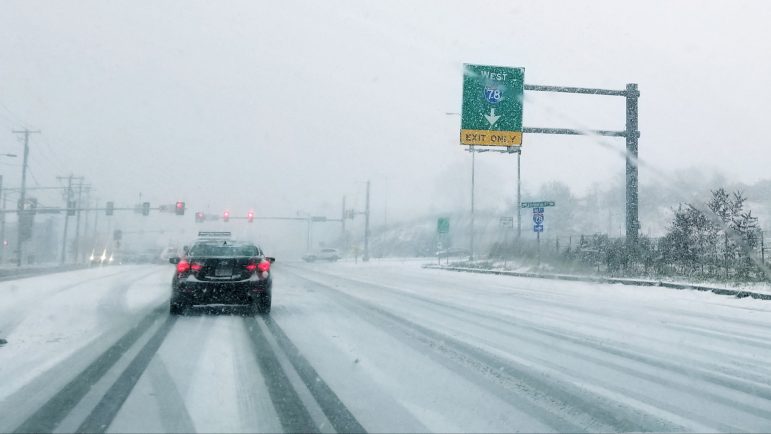 Approaching the intersection of Silvex Road and the I-78 westbound on-ramp, heading north on Rt. 412 in Bethlehem.

A truck stuck on a slight incline along Third Street near Hayes Street in South Bethlehem caused traffic to back up around 2:30 pm. 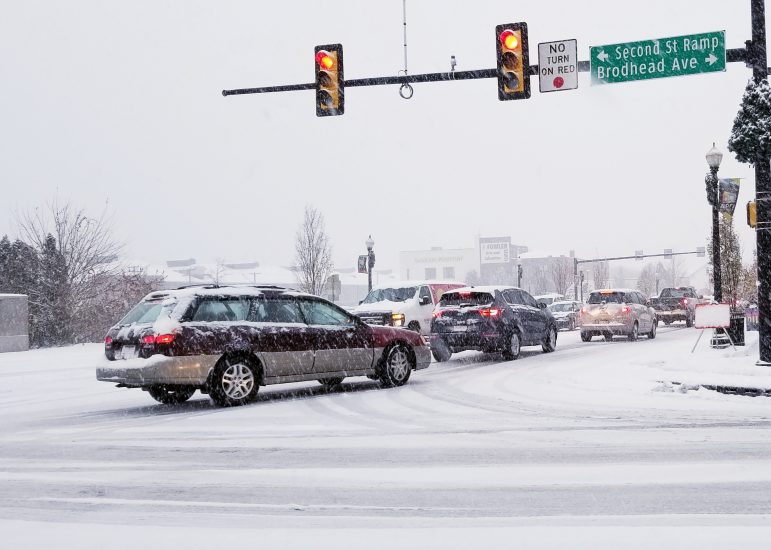 Standstill traffic at Third Street and Brodhead Avenue, coming off the south end of the Hill-to-Hill Bridge in Bethlehem. 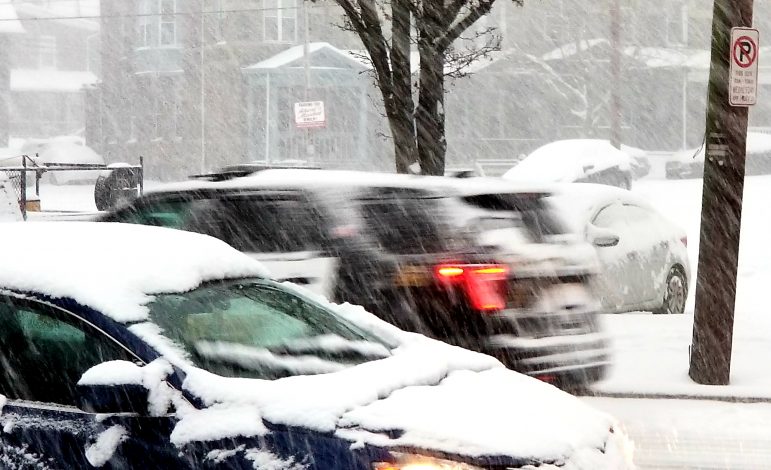 Police vehicles were among the few that were able to maneuver through the gridlock that paralyzed much of South Bethlehem for hours Thursday. 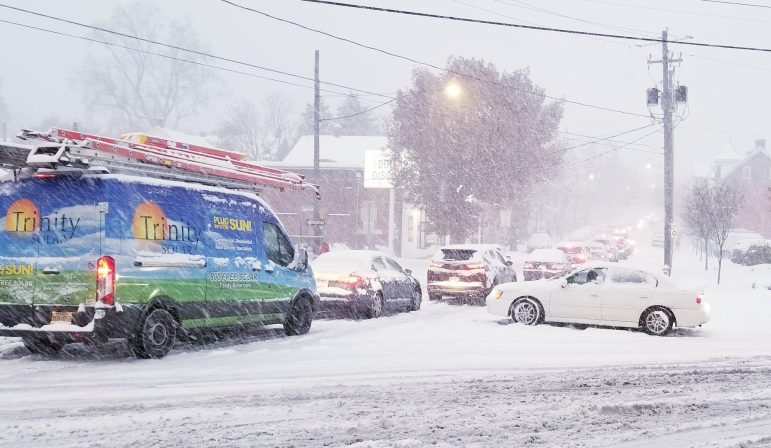 Traffic backed all the way down the mountain (Wyandotte Street) to 5 Points and beyond in Bethlehem at around 4 p.m. 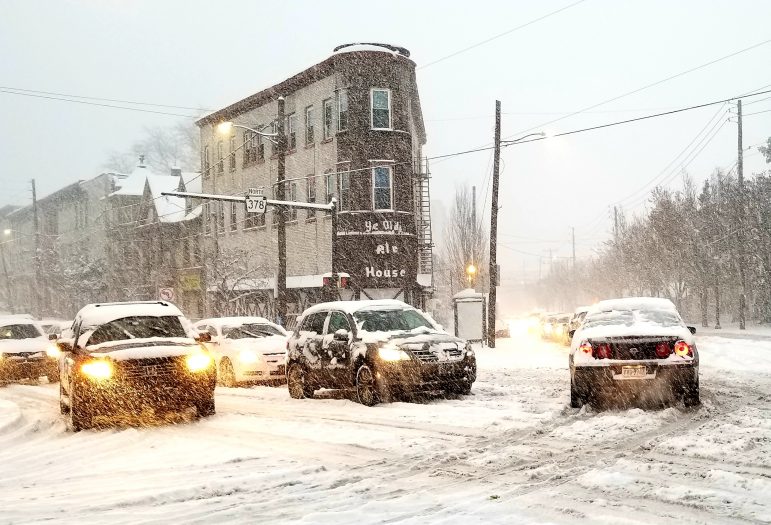 Traffic at the 5 Points intersection in Southside Bethlehem was nearly at a standstill at around 4:15 p.m. Thursday, as heavy snow fell. 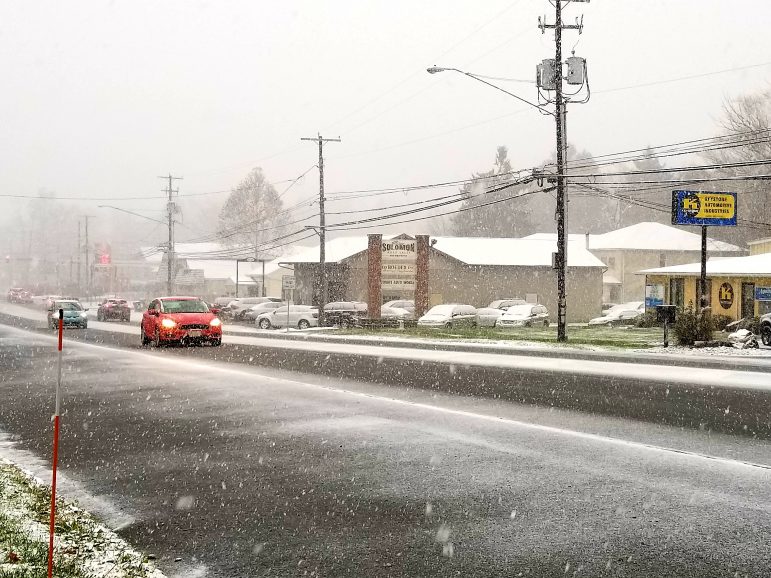 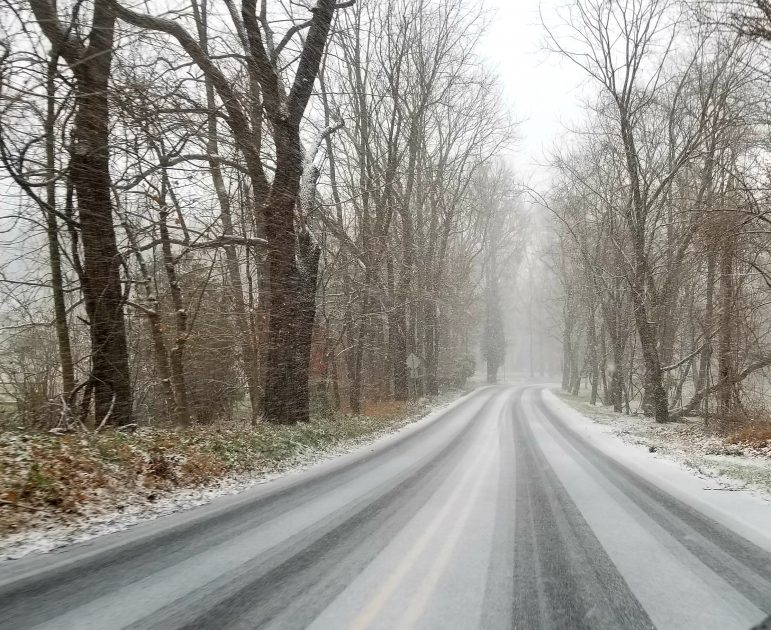 Leaves still covered many of the trees and sidewalks along Constitution Avenue in Hellertown.

A tree still in leaf appears out of place as heavy snow falls by Wendy’s at Rt. 412 and Silvex Road/I-78 Thursday.

Business was brisk at Giant in Lower Saucon Township

Heading west on Walnut Street by Union Cemetery of Hellertown.