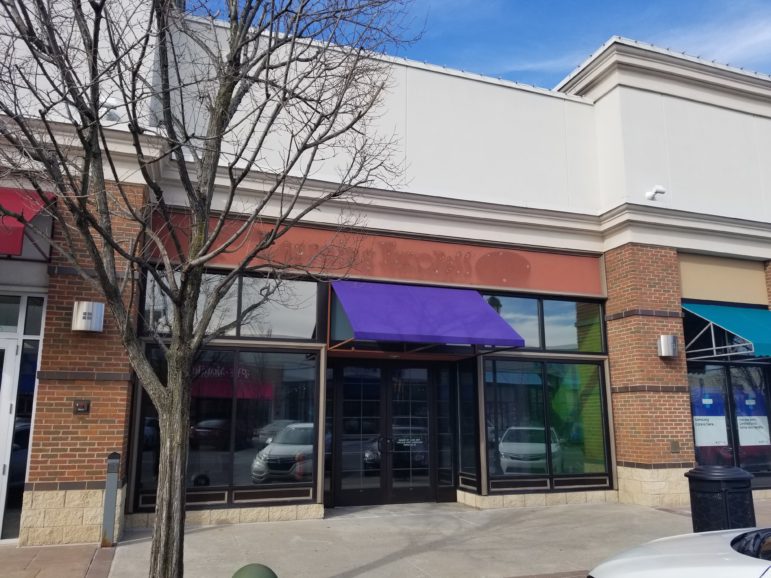 Staining is visible where the Learning Express Toys sign was attached–until recently–to the facade of this now empty storefront in the Promenade Shops at Saucon Valley. It was located near L.L. Bean at the west end of the retail complex.

One of a number of vacancies in the Promenade Shops at Saucon Valley currently is the suite that was occupied by Learning Express Toys in the Upper Saucon Township lifestyle center.

The Bethlehem Township store closed less than a year after it opened, according to a Lehigh Valley Live story from early September.

Both were part of a locally-owned franchise, although the Promenade Shops store was open for nearly a decade, according to a Morning Call story published earlier this month.

About five years ago the Promenade franchise was reopened under the ownership of Vincent and Michell Albanese, according to a February 2015 news release on the Learning Express Toys company website.

“Learning Express Toys of Saucon Valley will set itself apart from the ‘big-box’ toy stores with unique toys, gifts and exclusive products,” touted the news release at the time.

The company has several other franchise locations throughout southeastern Pennsylvania, but none in the Lehigh Valley after the closing of the Bethlehem Township and Upper Saucon Township (Promenade Shops) stores.

Other vacancies that have resulted from recent closings in the Promenade Shops include:

The Promenade Shops’ Bar Louie, part of a Texas-based chain of restaurant-bars, was not among the dozens of locations its parent company closed over the weekend when it filed for Chapter 11 bankruptcy protection.

Be it an eatery or a retailer, what else would you like to see open in the Promenade Shops?

One bit of good news for the retail center announced this week concerns the multiplex movie theater that is an anchor tenant and a major draw there, particulary on weekends.

“AMC Center Valley 16 has begun the Dolby Cinema conversion for Auditorium 2,” it was announced in a Promenade Shops news release Tuesday.

The conversion, which is expected to be completed in early 2020, will reportedly improve the sound and picture quality of movies that are shown in that theater.

“A Dolby Cinema is designed from the ground up to provide the best sound, picture, and environment for any movie, letting you step into another reality and surrender to the story,” the news release said. “Dolby screens are designed to be brighter and have a higher contrast ratio than standard screens… Reclining seating will also be available.”

Information about leasing space in the Promenade Shops is available on their website or by calling 610-791-9707.